Tomatoes should not be irrigated 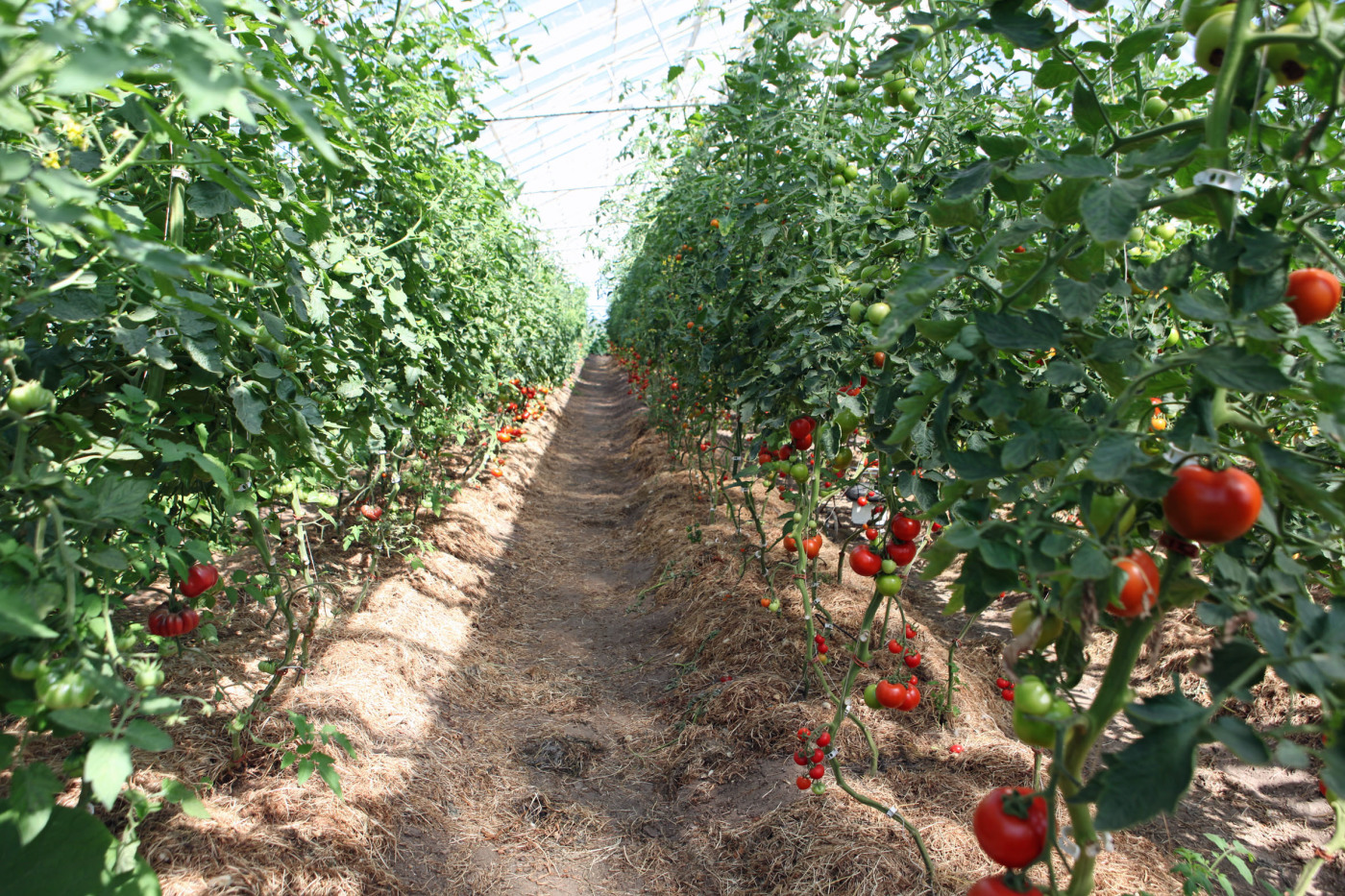 We nurse our tomatoes way too much.

They just have to learn to find the food themselves.

The tomato season has ended. Now it’s time to clean out the greenhouse, and the old plants that no longer yield should be removed. Although a lot of water has poured outside, we have all watered the plants inside the greenhouse. In any case, it’s a necessity if they are in plant pots or capillary boxes, but how essential is it if the tomatoes are in beds in contact with the soil?

Right now, there’s a self-sowed tomato seedling in my greenhouse. A seed has fallen into a gap in the flooring. It has been there for a while and has even had the fate of a small amount of sunlight. The seed had landed just under a plant table. It has neither been watered nor fertilized. Admittedly, it has neither got flowers nor offspring, but it looks quite healthy.

It makes me think of the now 77-year-old Russian gardening author Galina Kazmia. She reports in her books, how she in generations has learned to imitate nature and effectively grow healthy vegetables. Galina Kazmia has, in addition to her long authorship, worked as a chemist and physicist. She is first and foremost concerned with growing vegetables without too much work.

Galina sows her tomatoes in flowerpots that she makes herself. The pots are 4-6 inches long and 1.5-2 inches narrow plastic rolls with soil. The trick of sowing in pots is to force the roots to move down and not to the sides. Also, she plants quite dense with only 10 inches between each plant. This means that at first, they are tall and thin, but that changes when their roots have reached far enough into the soil. When the tomatoes are planted, they get 5 litres of water to start. The soil is covered by newspapers to retain the water. Afterwards, the plants are no longer watered. If they want water, they need to move into deeper layers of the soil. I guess you say: “that’ll teach them.” Galina plants in flowerpots, and since she has taught them from the tentative beginning, that water is obtained by sticking the roots further into the soil, they will continue developing their root system downwards. The way down can easily be 5 feet.

The method fits quite well with the method the Swedish horticulturist Kjell Åberg told me when I visited him in Ystad one summer. He thinks we water tomatoes too much. He showed me how dry the soil was in his tomato greenhouse. He only watered sparingly and forced, in the same way, the tomato plants’ roots further into the soil. A trick his father had taught him. According to Åberg it is the growbags that have “taught” us to grow in a way, so we are compelled to water more than necessary. 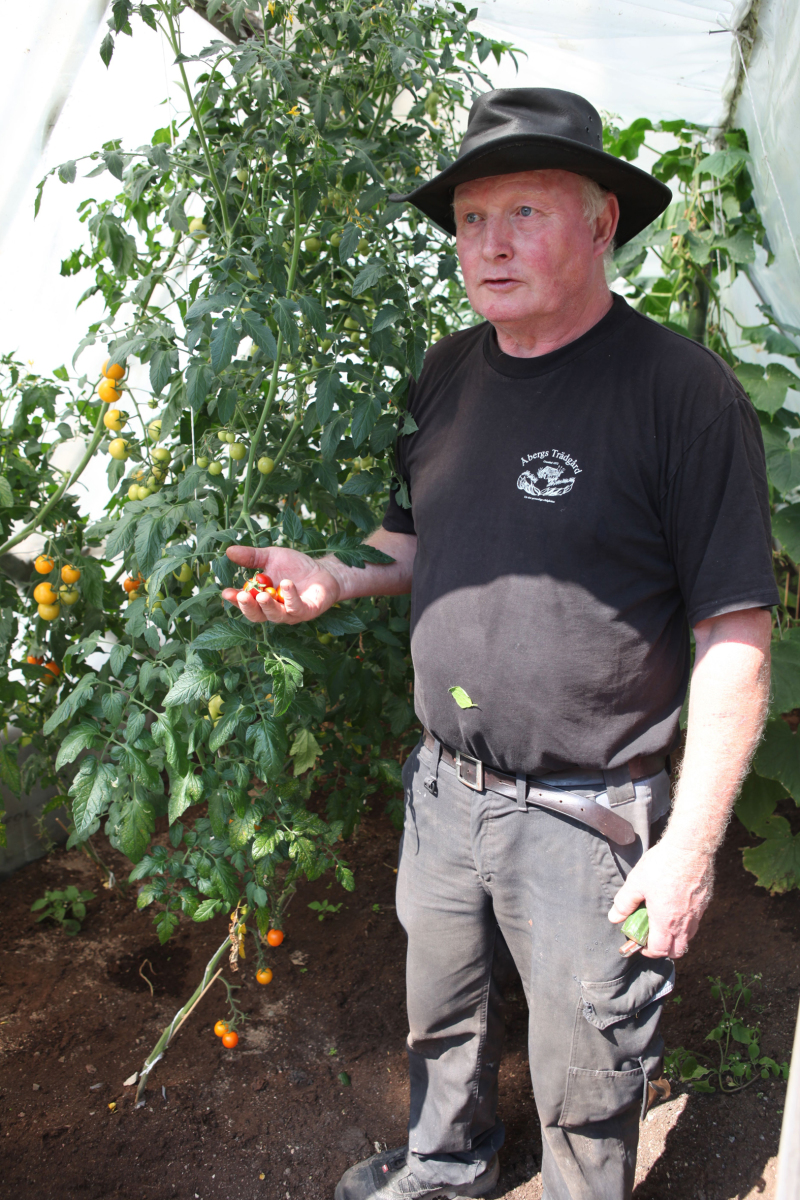 Kjell Åberg has learned from his father that tomatoes need to be tormented.

Chicken feathers as a packed lunch.

Galina has another trick in addition to the watering trick. She fertilizes only once. While planting her tomatoes, she adds a handful chicken feathers from an old duvet in each hole. The feathers aerate the soil, and they contain silicon which strengthens the outer cell layer of the leaves. This means that the plants are less exposed to various fungi diseases. The cultivation soil is good standard garden soil, which every year has leaves added that easily is worked into the soil. The soil should not be dug, as it would destroy the micro life in the different layers. Also, she makes her own primary fertilizer, that is a mixture of a tablespoon phosphorus per plant, some potassium and some undefined minerals, that she sells through online commerce in Russia. If the plants need more, she thinks they will obtain it further into the soil. 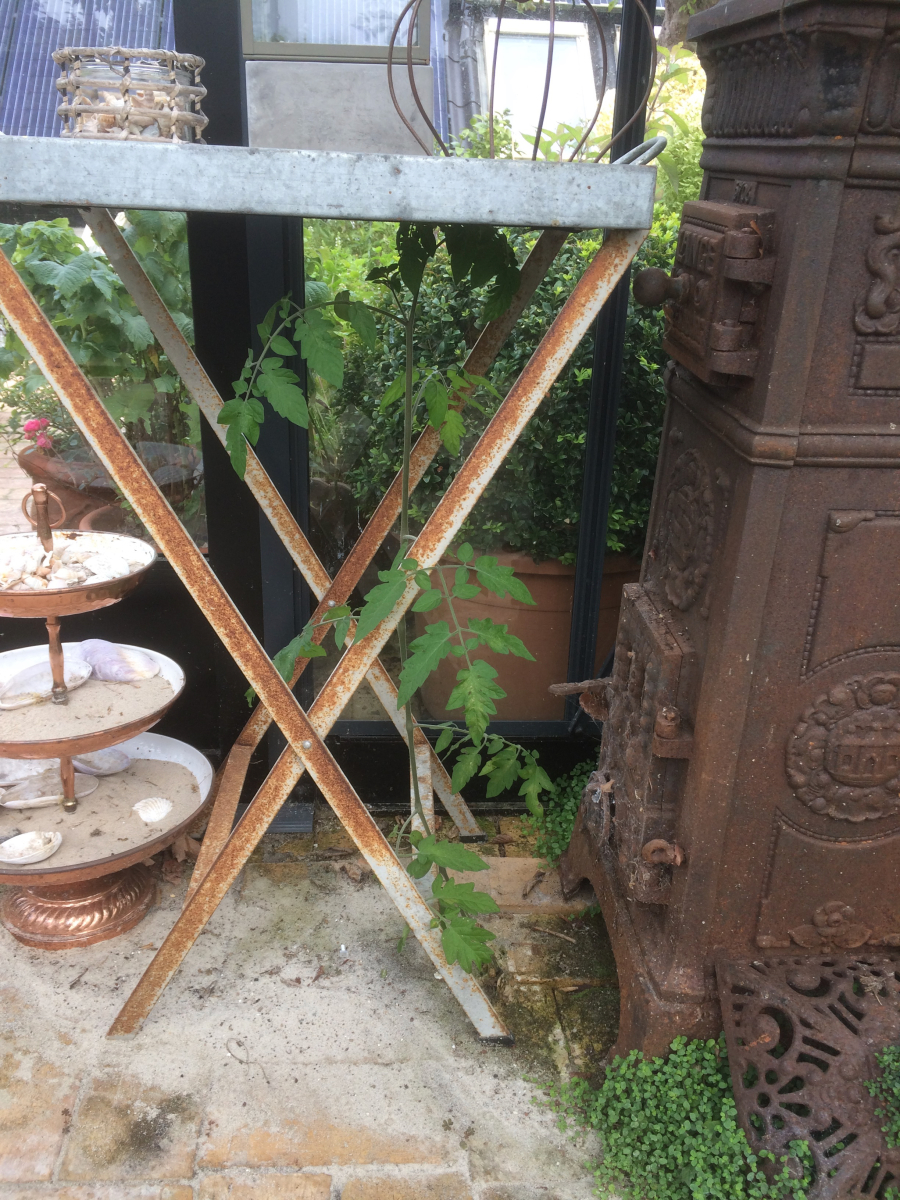 The tomato seedling that has sowed itself in my greenhouse, or I dropped a seed. The seedling hid under a plant table and has never been watered or fertilized.

If you want to try growing tomatoes that take care themselves, remember to sow the tomatoes yourself. If you buy them ready for planting, you cannot be sure that the roots have “taught” themselves to grown downwards and not to the sides. Moreover, I tried this summer to grow tomatoes in the kitchen garden beds. They completely cared for themselves and provided a fairly nice harvest.

You can watch a video of the Russian garden guru here: https://youtu.be/KhBbs7SdD5w