Lena Nielsen and Karl Erik Riis have built a greenhouse from two greenhouses. It has given the family a unique place outside with room for both cultivating tomatoes and being together relaxing. 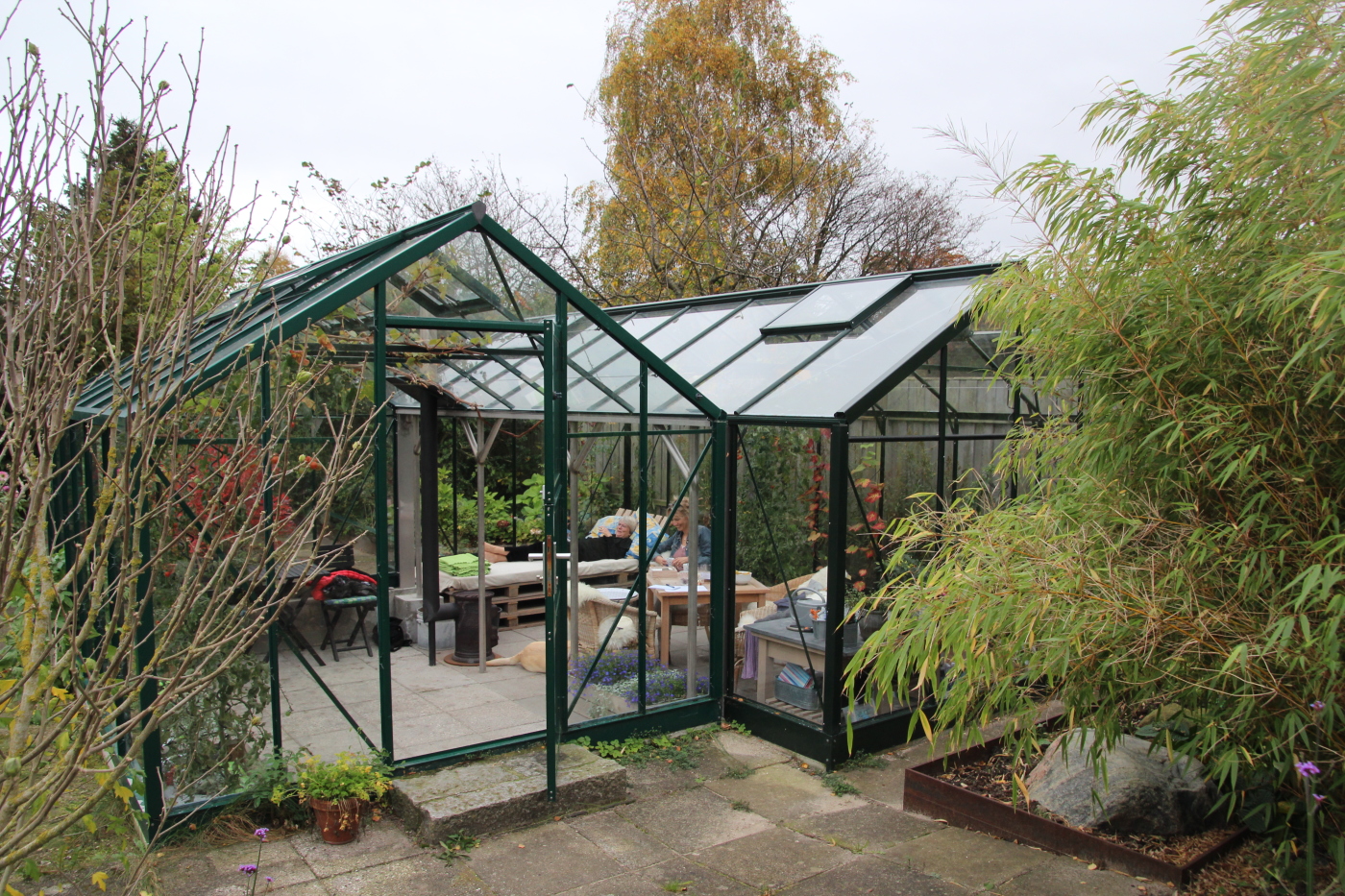 At first, Lena Nielsen and Karl Erik Riis had a Juliana Premium greenhouse in the garden, which had many flowers beds, blueberry bushes and other nice plants. Then 3 years ago they decided to expand the greenhouse and build another model into the old one. It has created a unique space where there is room to enjoy dinner, cultivate tomatoes and chilli, and take a nap on the homebuilt daybed.

Warm and cosy in October

The Greenhouse Forum met Lena one day in October where the wet tawny leaves had covered the lawn like a rug, but inside the greenhouse, it was warm and cosy.

“I wanted two things if we were expanding the greenhouse – a daybed and a wood stove,” said Lena Nielsen.

The wood stove is an old wrought iron stove that appears brute and with no frills. It is intentional as the greenhouse (and garden) should not appear “too pretty”, as Lena expresses it.

Moreover, there are many cosy corners and both the chilli and tomatoes are still thriving. “We prolong the season a lot as we have a wood stove. We can both begin the season earlier and end it later. It is amazing to sit in there and enjoy the sun even though it is raining outside,” says Lena Nielsen. 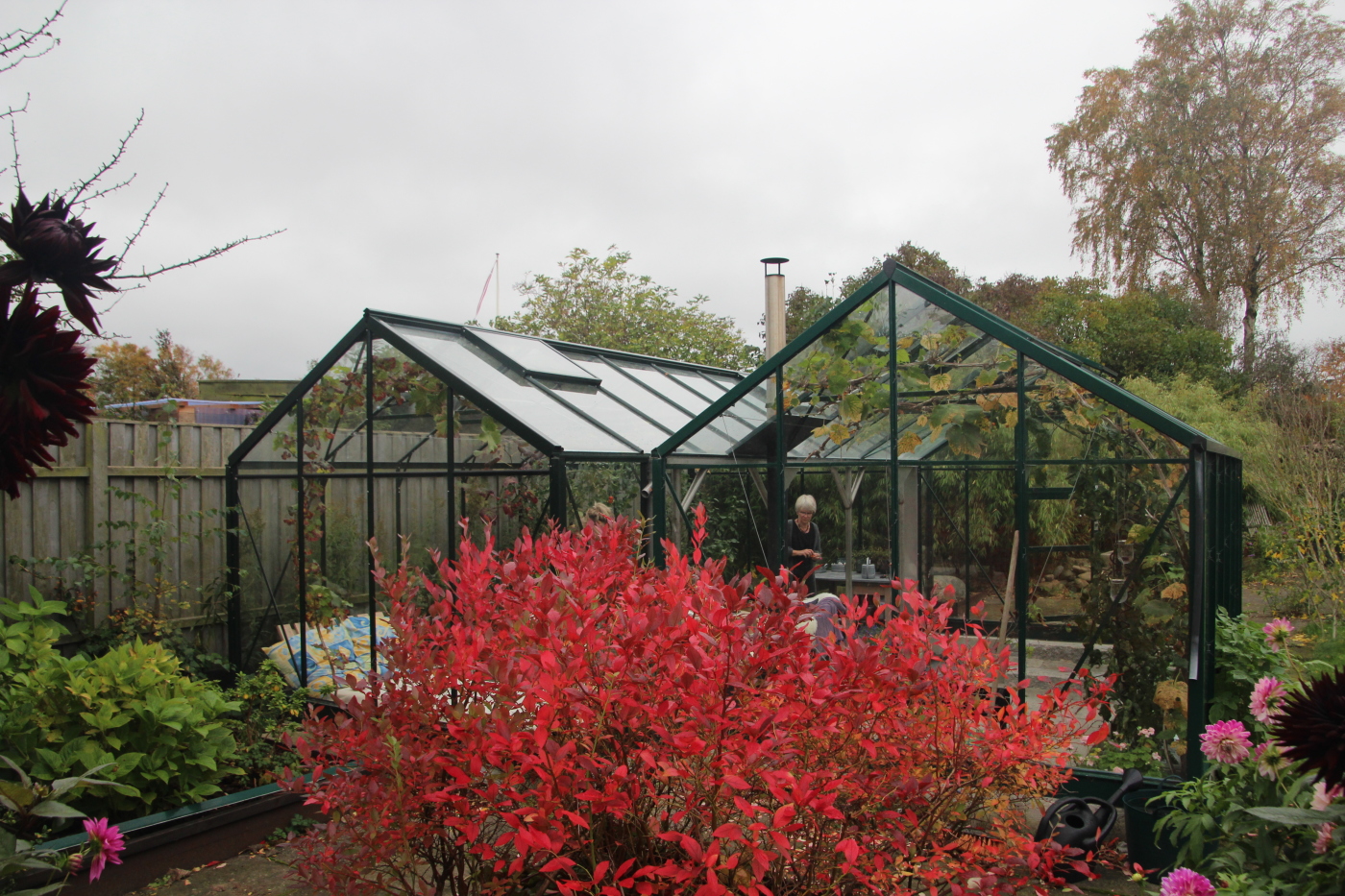 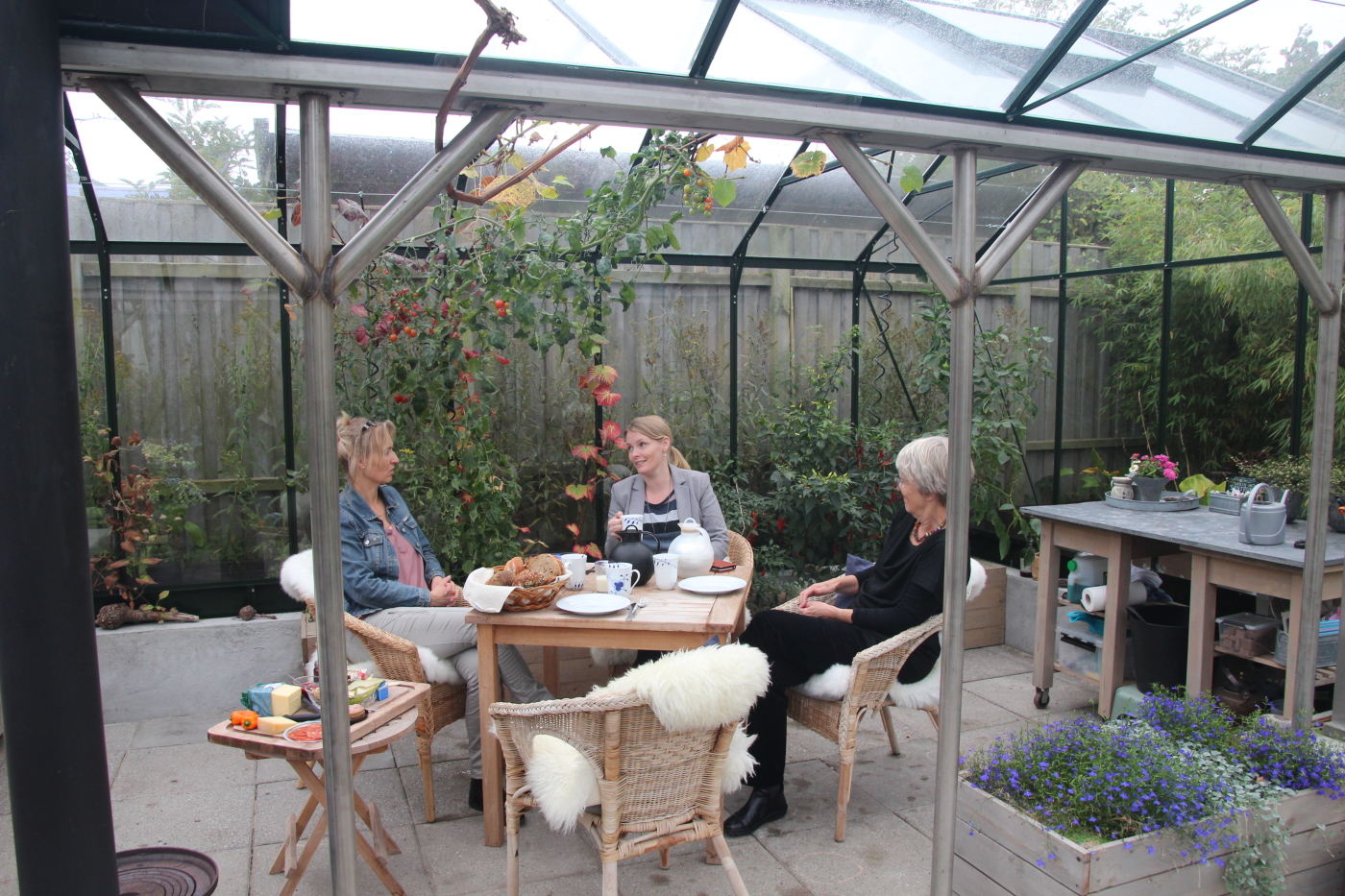 It needed a special construction to build the two greenhouses together. Lena and Karl Erik have designed the four bearing poles between the houses themselves. A smith has made them in stainless steel. 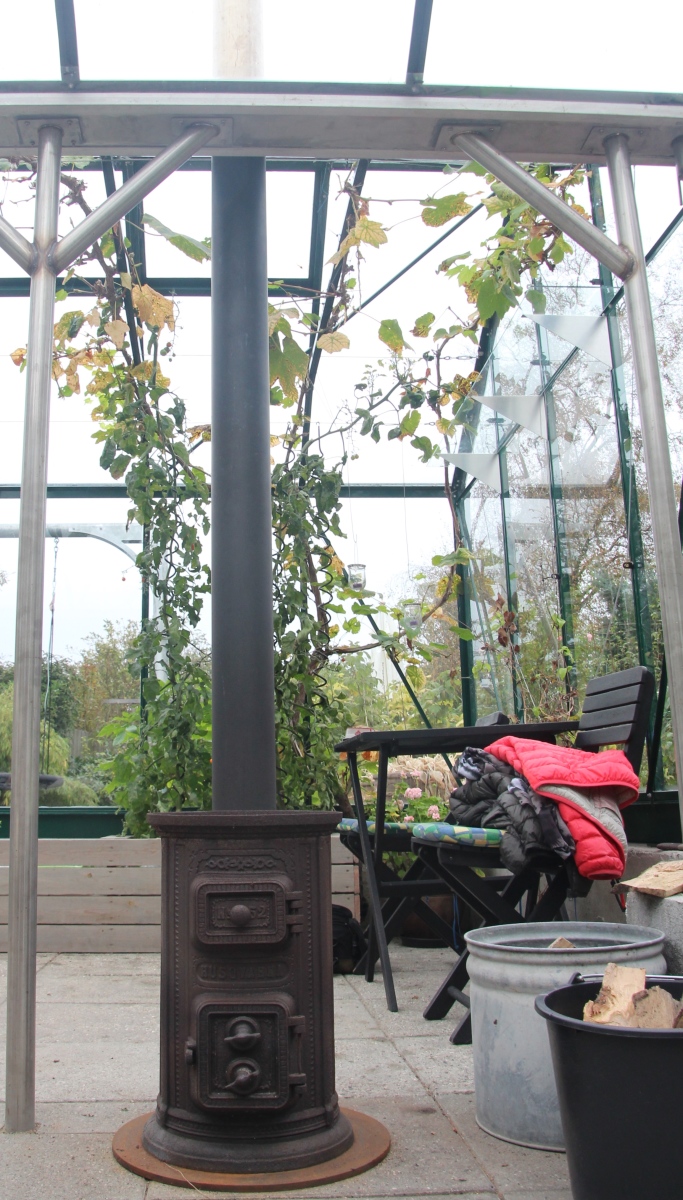 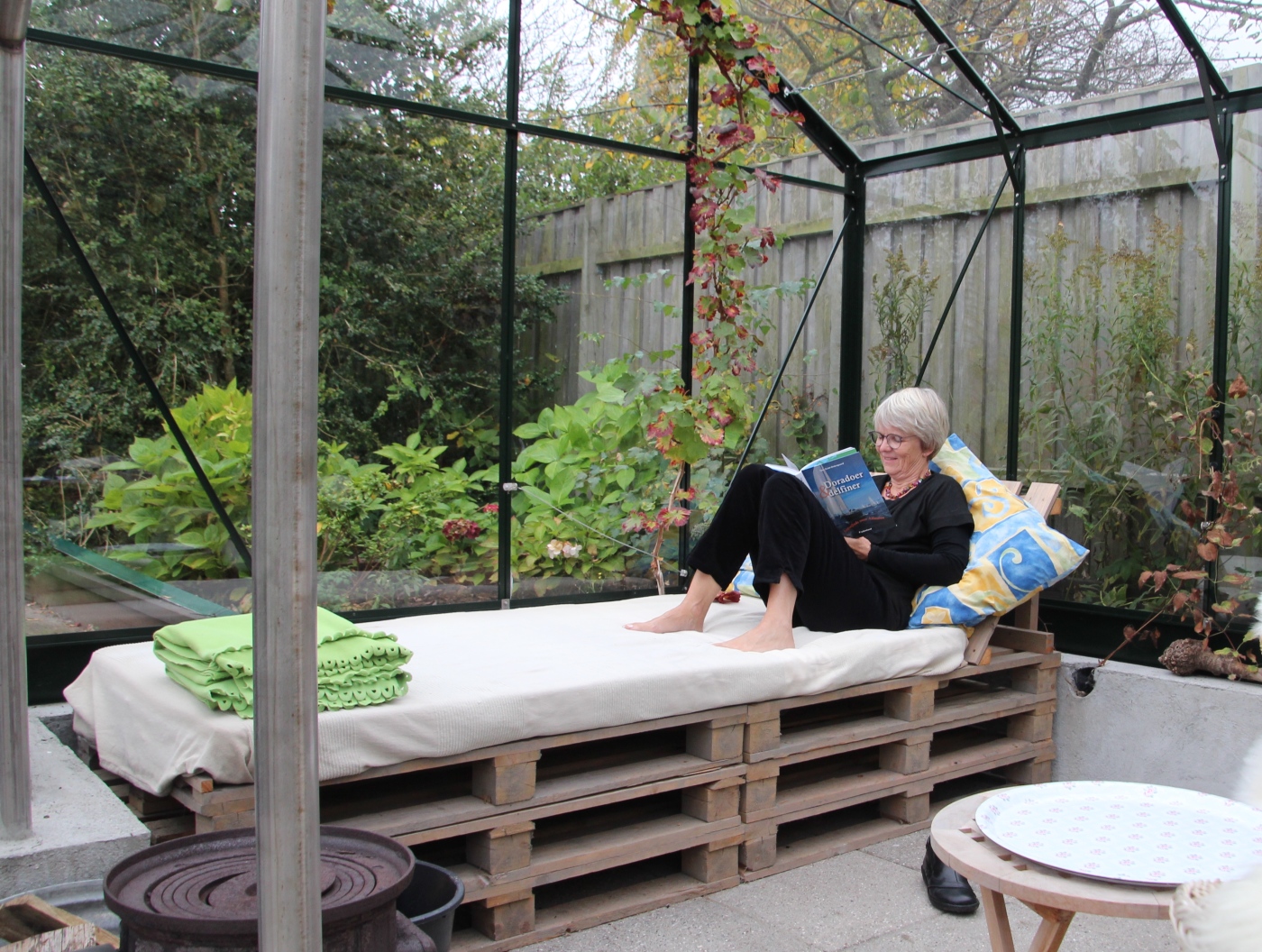 Lena wanted two things when they decided to expand the greenhouse. A daybed and a wood stove. The last-mentioned means that the family can prolong the season significantly. 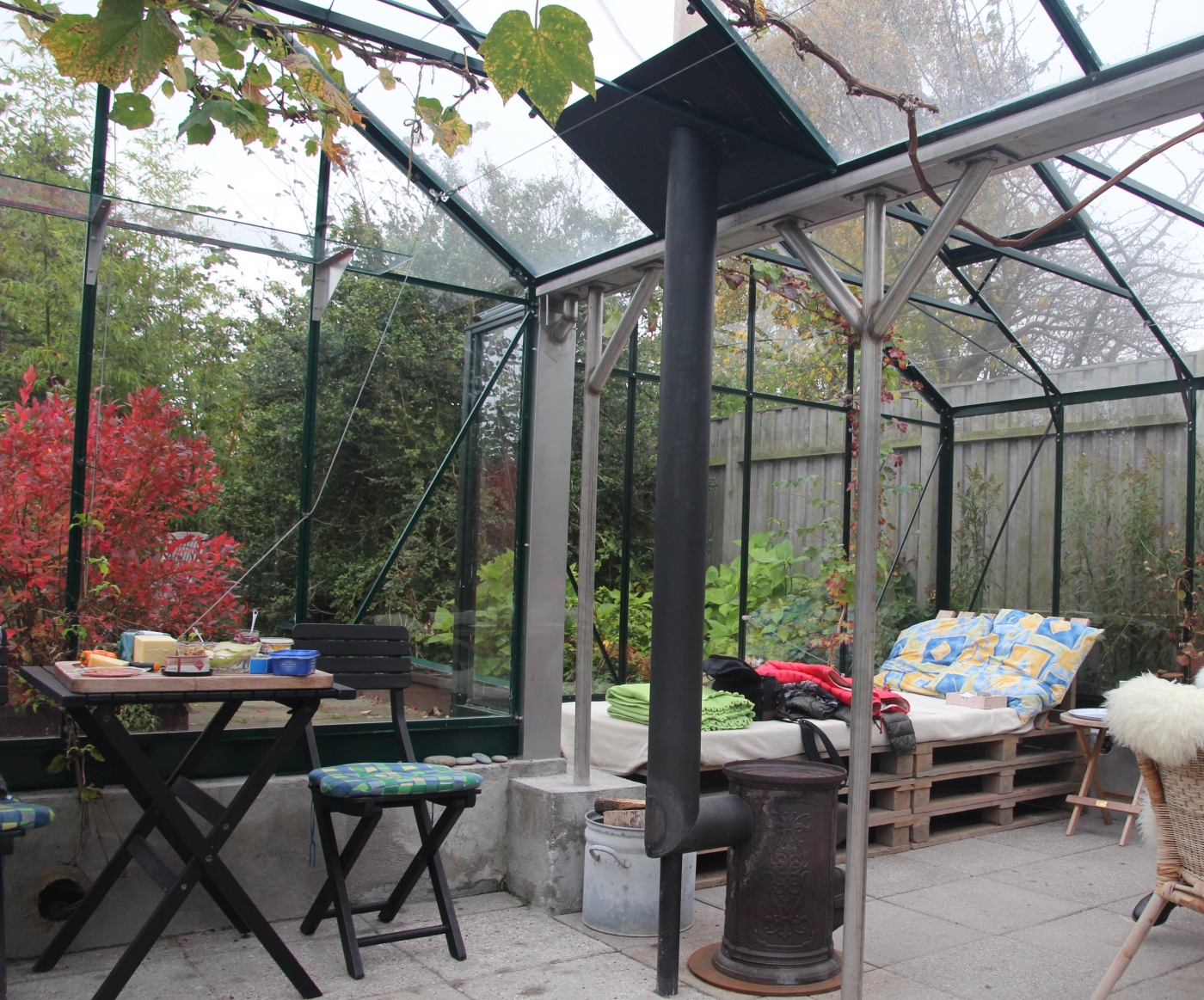 There is room for many cosy corners and thereby room for both relaxing and cultivating in the greenhouse. Now mid-October the tomatoes and chilli are still thriving. 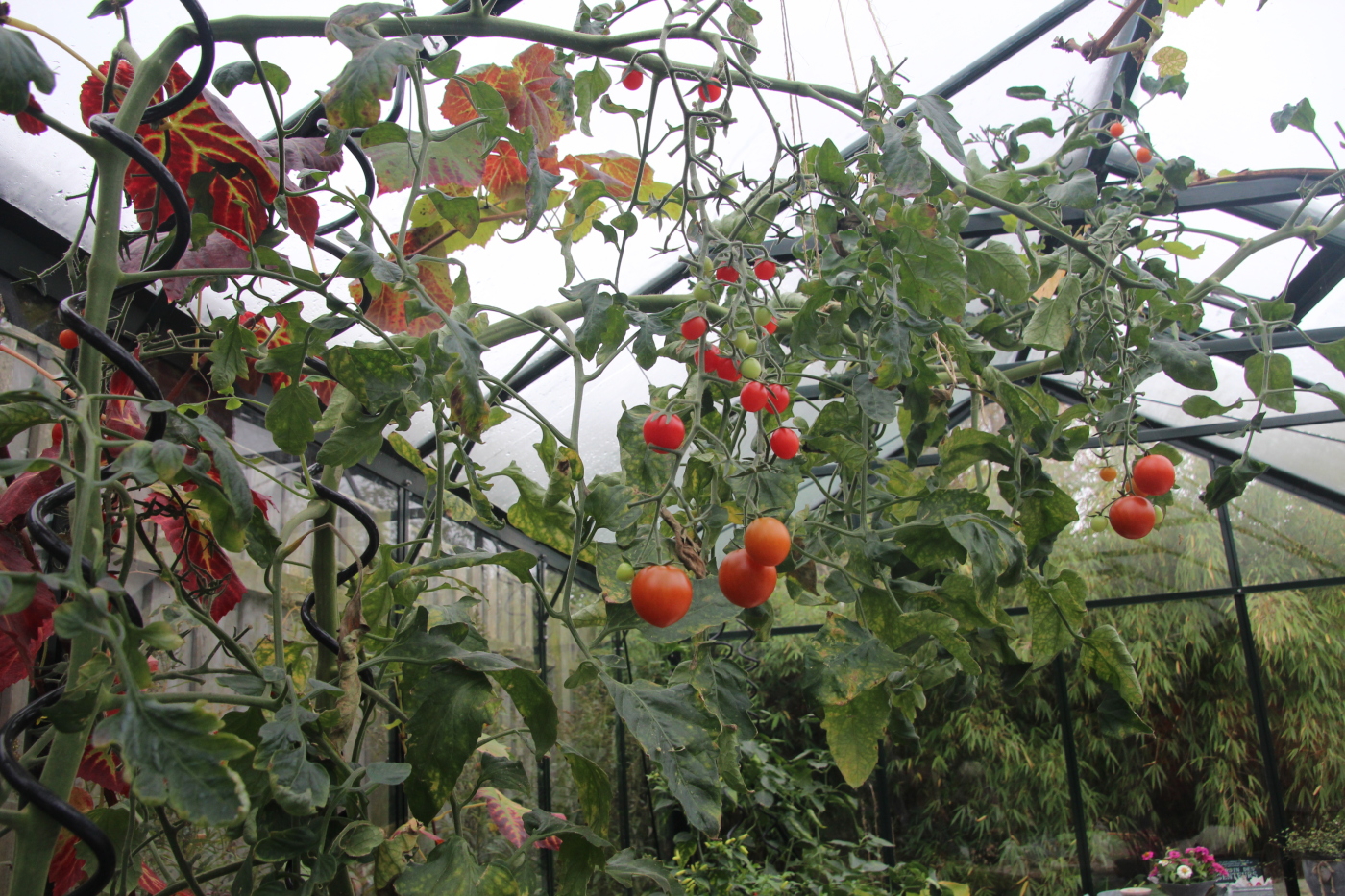 Good advice for you who considers building two greenhouses together

By lowering the entire greenhouse, you get greater spaciousness and at the same time, the greenhouse won’t seem as dominating in the garden.

With only one door space can be utilised better. 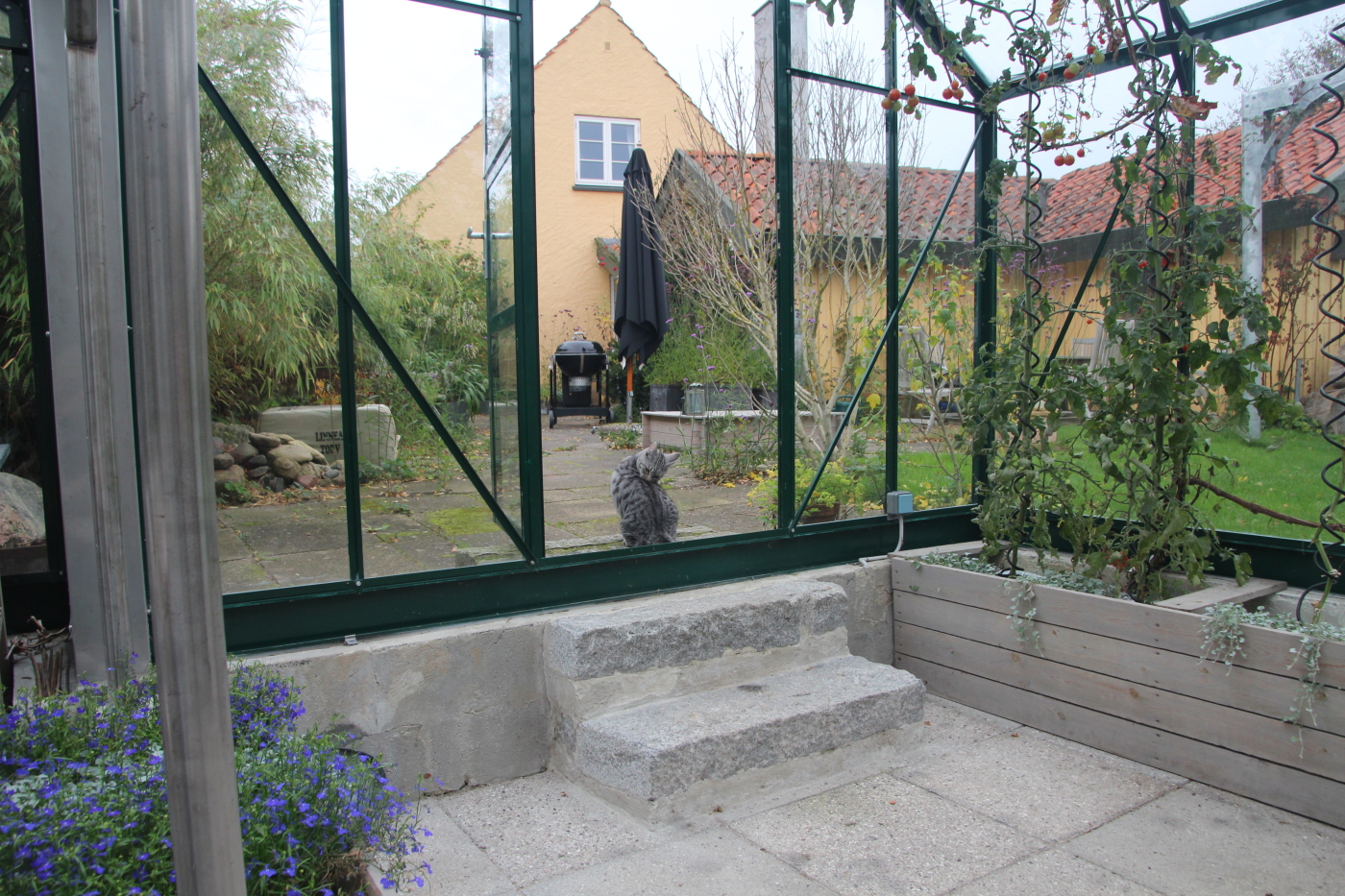 By staggering the two greenhouses you get a more exciting room. 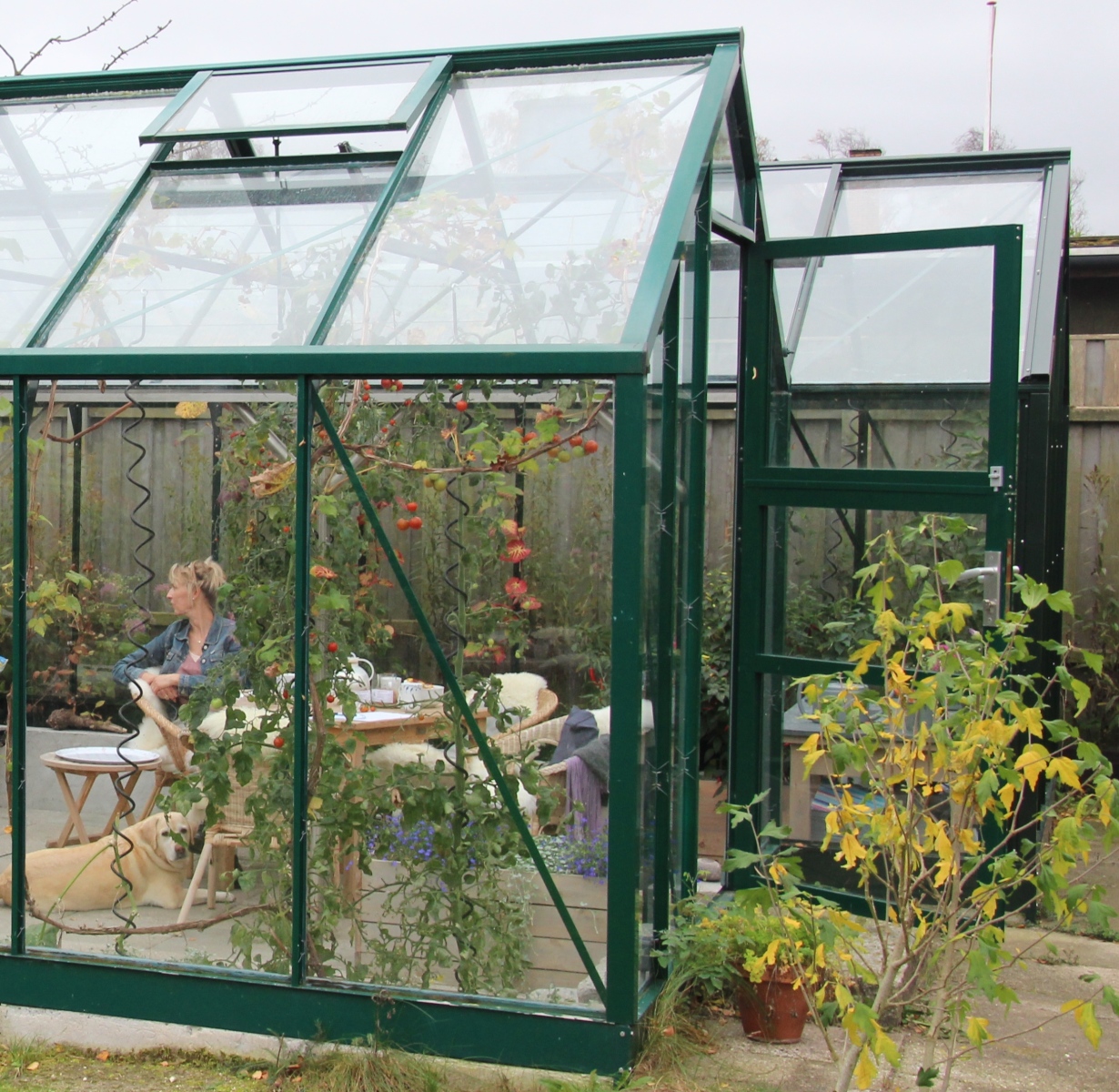 As the middle of the greenhouses gets very stable, as the two greenhouses meet, collar beams are a good idea. They will transfer some of the stability to the sides of both greenhouses. 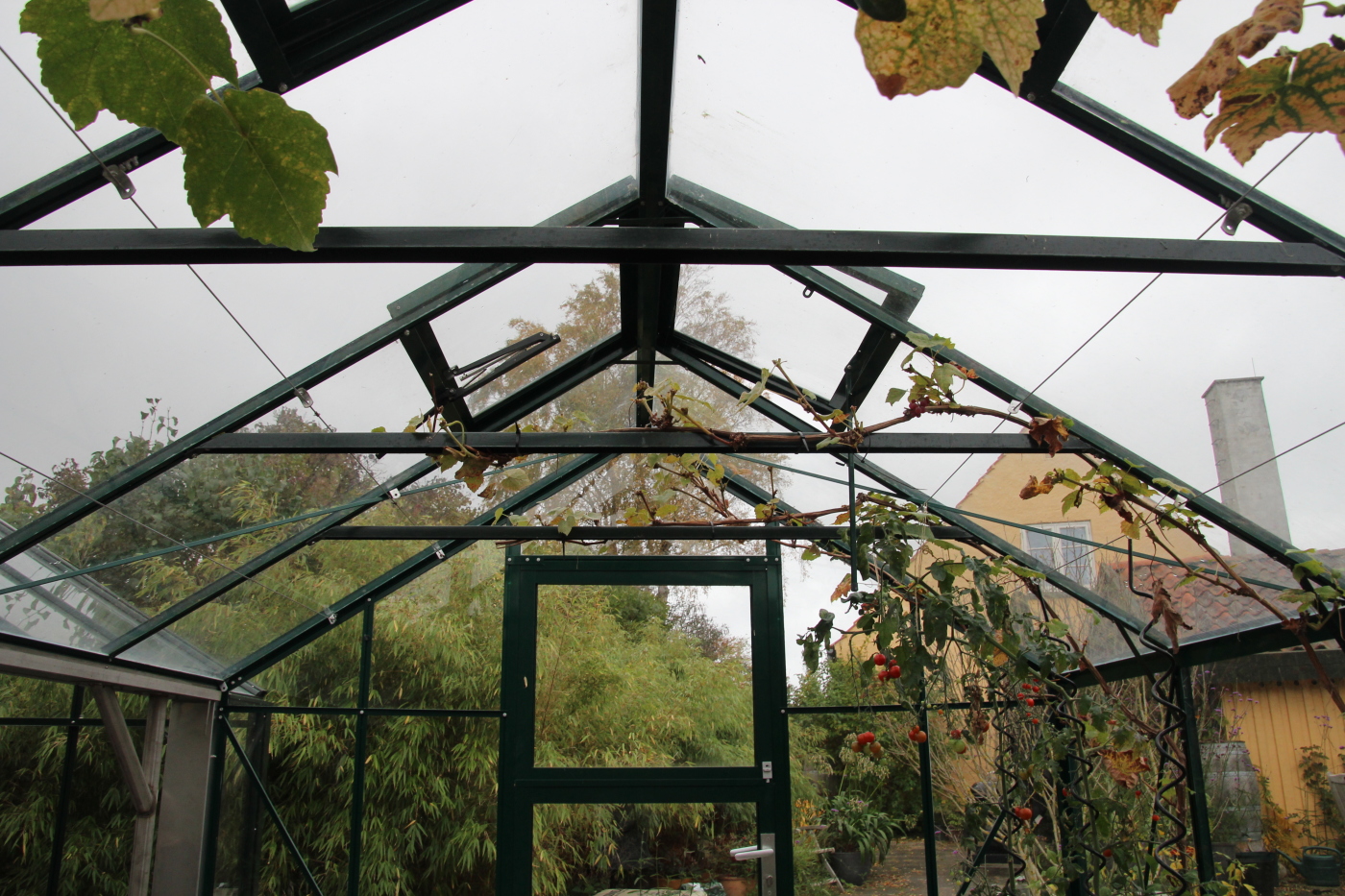 The couple has built an internal gutter as the greenhouse had a lot of condensed water dripping on the woodstove and other things. Unfortunately, the internal gutter was made too narrow, so a lot of the water is dripping out. The gutter is not just something you change, so Lena has put cake border folie on both sides to collect some of the condensed water. In both ends, there are two small metal tubes where a hose can be attached to lead the water away. 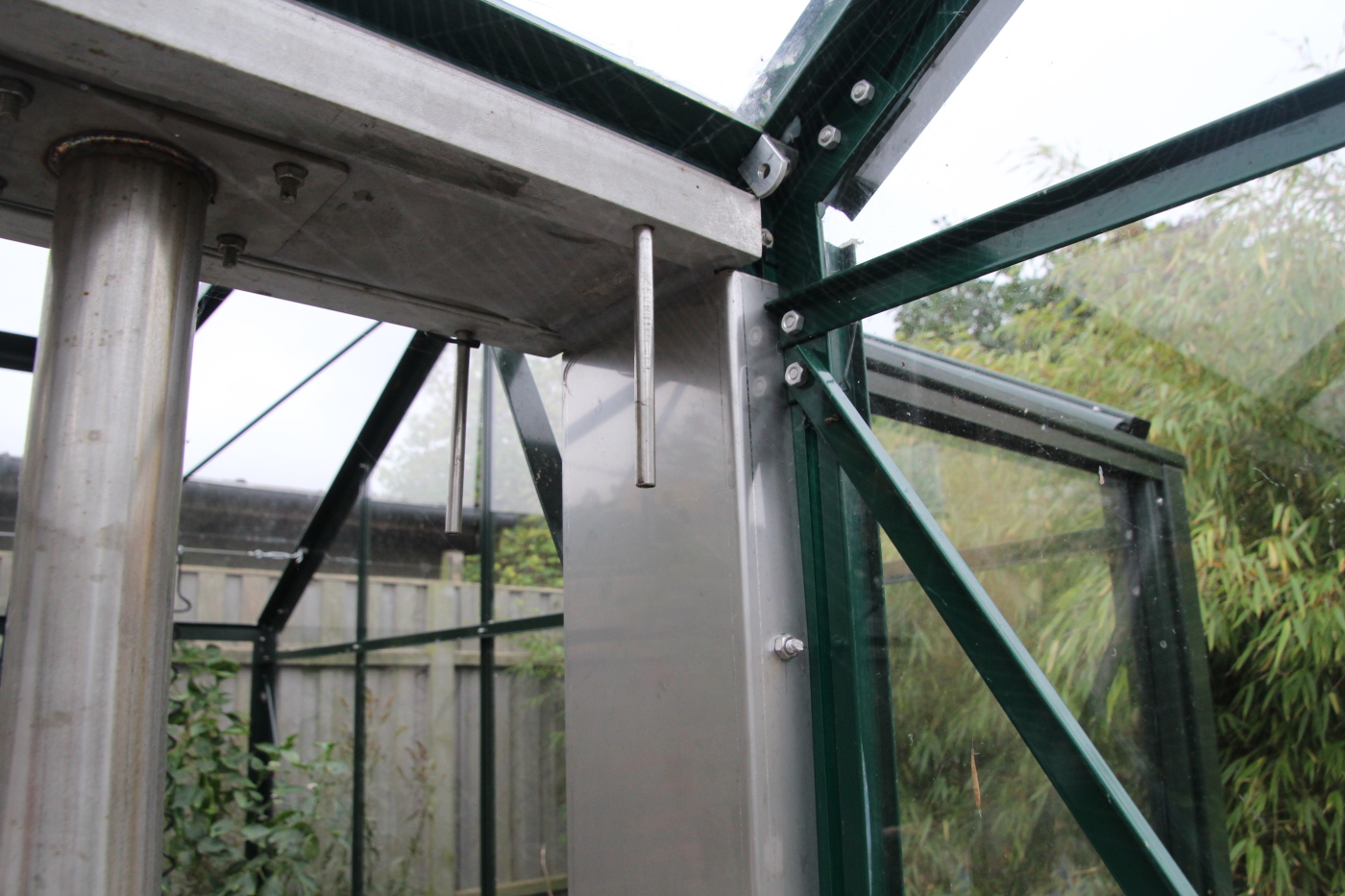 The gutter between the greenhouses leads water away. The rainwater was supposed to be collected by a rainwater butt – that is one of the projects on the couple’s to-do-list. 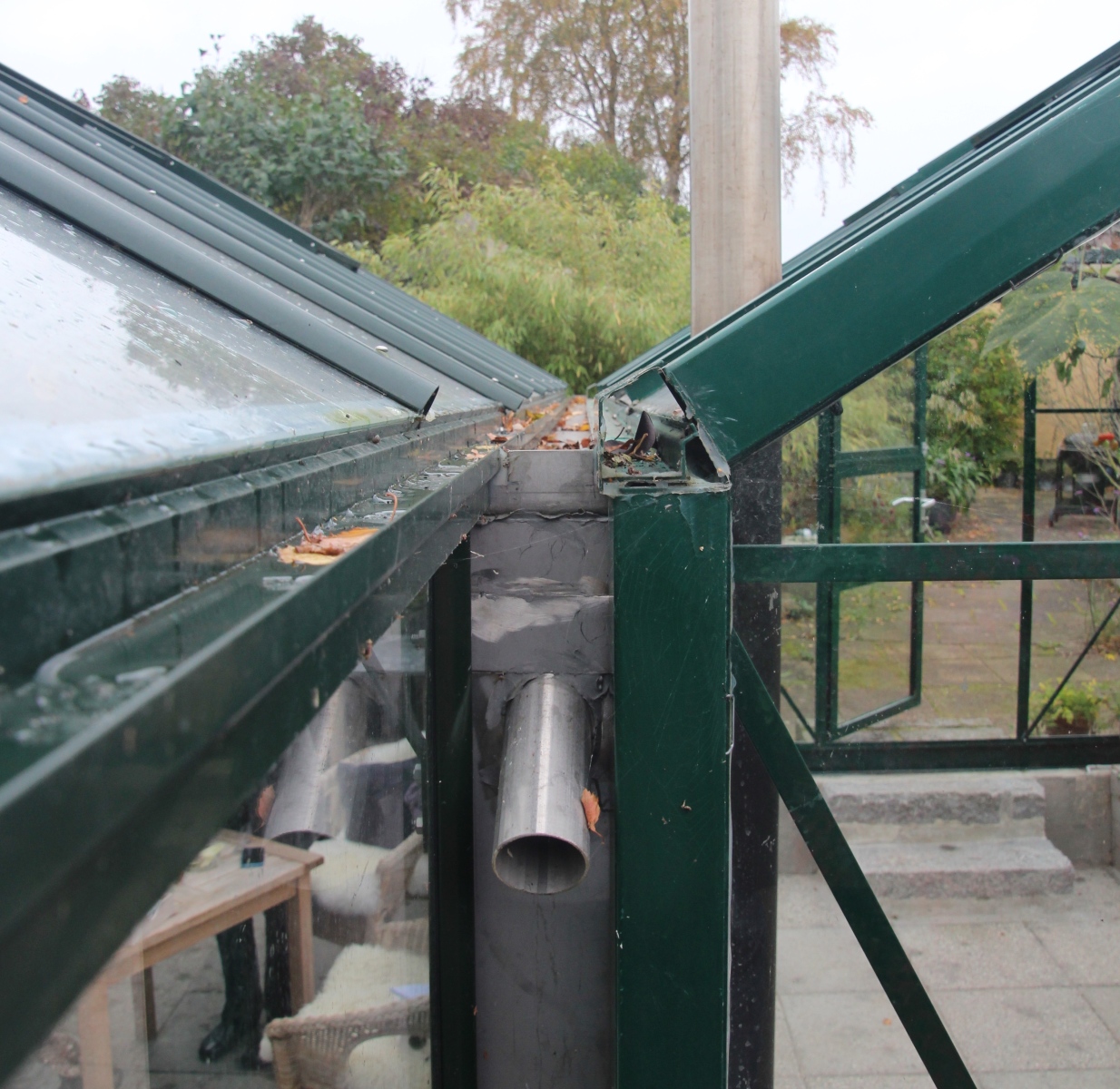