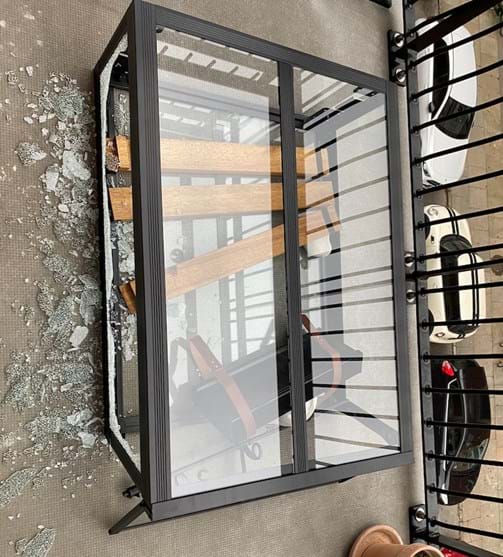 The parsley survived, but it was differently careless of me not to fix the balcony greenhouse.

I heard a BUMP from the balcony. It was Saturday morning, the wind was blowing through the street in Copenhagen, and I was looking forward to a calm Saturday morning at a slow pace with jazz and coffee.

"I hope that was not the greenhouse," it sounded from my boyfriend.

It hit me that I had not fixed the balcony greenhouse to the railing, as was otherwise stated in the instructions that I should do.

While my boyfriend was making coffee, I opened the balcony door - and there it was. The parsley. With the pot on top of it and soil spread out well mixed with a bunch of ​​small glass balls from the smashed glass. I quickly saved the parsley and raised the small balcony greenhouse. To my great surprise, it was intact except for a single pane in the side - the glass front, on which it had landed hard, did not have a scratch.

It looked bruised, the parsley. It struck my heart. Here I had been going around talking to it and caring for it, and it had grown and stood out there in the winter darkness proud and green, and then it ends in an accident because of my laissez-faire handling of safety.

The other plants in my winter cultivation project - tomatoes and chilli are otherwise fine. And this even though I have neglected them for care and presence. In the beginning, I even made my upstairs neighbour turn on the grow light, if I was not at home for a few days (I have not gotten to buy the timer). The plants are now left more to themselves. In other words, I have lost my grip. 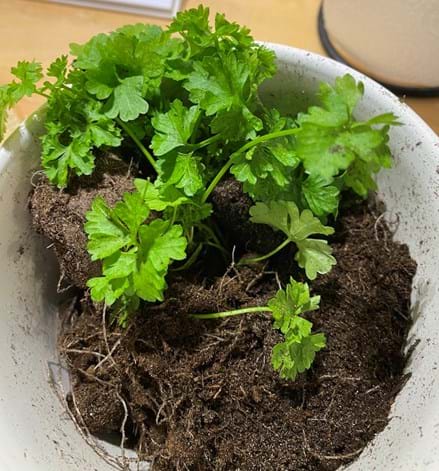 A bit bruised parsley with roots showing, but it is now back in a pot and surviving.

The nice thing is that my plants are still alive. They have neither gotten pests nor are dead - so maybe I’m doing fine. One of the reasons why I started winter cultivation was that I was told that it was easy and that it actually did not require much irrigation or care.

Maybe that's the secret to success - adapting your success to the efforts you make. Of course, I won’t be there until tomatoes and chillies are appearing on the small green branches, but I believe it will happen. The parsley has been brushed clean of broken glass and has been given a little extra soil, and the greenhouse is currently fixed with an old dog leash. It will all work out. 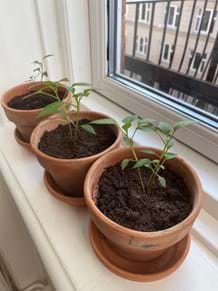 Winter cultivation has become popular and you can easily grow cabbage, radish and tomatoes in a dark time.