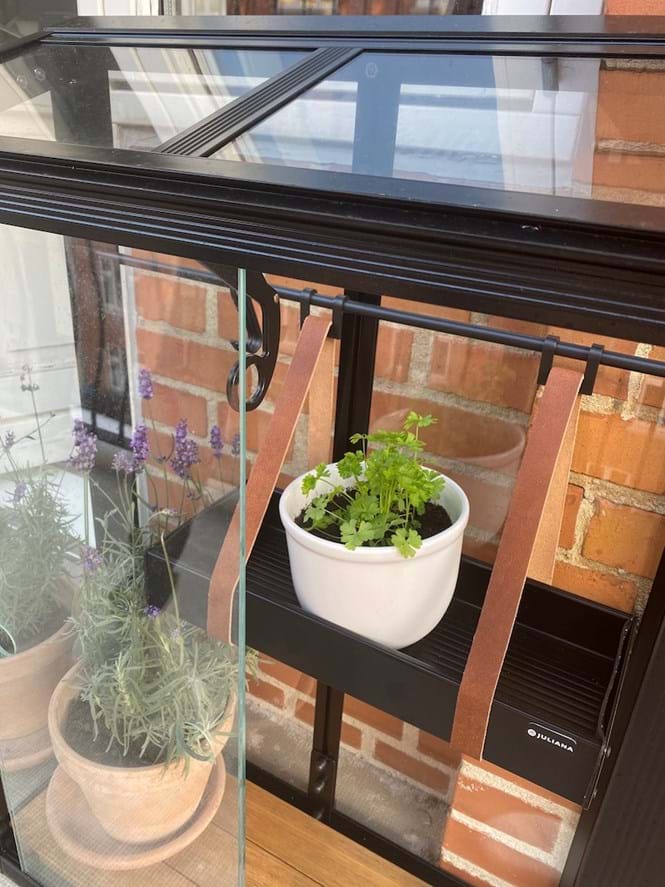 The parsley has got its own greenhouse - a Juliana Balcony that is perfect for the balcony. It will be there during the winter because parsley can withstand frost.

My everlasting spinach has gone to the nutrient-rich soil of the eternal fields, while I am left with two empty newspaper pots with some thin withered stalks. I had put them out on the balcony, along with the parsley, while my chilli and tomatoes were going to stay inside. 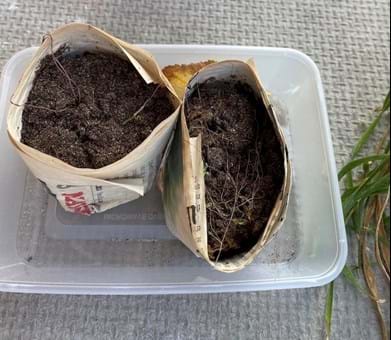 Everlasting spinach that never really had a life.

I'm not upset, because they never really sprouted - those everlasting spinach plants. For a long time, I thought that everlasting meant that it would take forever for them to sprout. It aroused my sympathy as I seem to be able to mirror myself and my persona in the essence of slowness. Well, but now they are dead - maybe because they were left too much alone, and who wants to grow when no one is recognising their existence?

I have taken note of this and that is why I am now giving all my attention to my four dwarf tomato plants, three chilli plants and parsley. Two of the tomatoes are now stuck in the living room window, where there is most light, but away from the radiator, as they should not be too hot. The other two are in the kitchen window and get extra light daily from an LED lamp. My chillies are in the other living room but are being moved to the kitchen to the LED lamp because the living room is partially north facing. And then there is the parsley. It has got its very own greenhouse on the balcony. 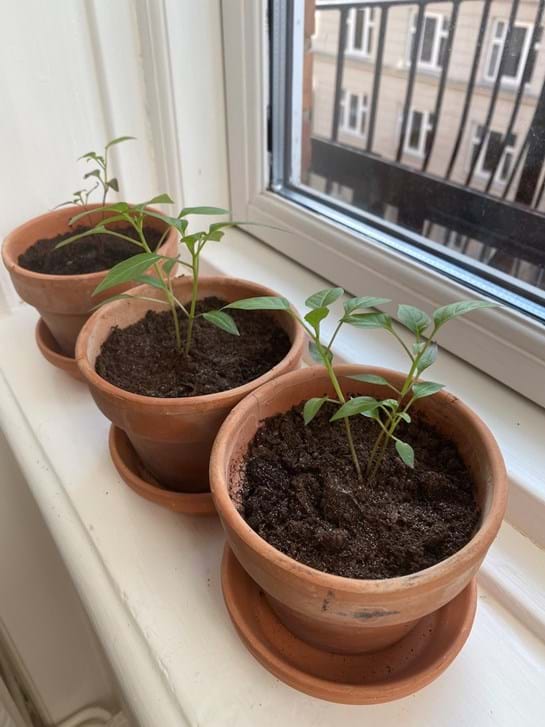 Chillies in a row. They get lots of light and love - especially the first is important in a dark time.

This is where my parsley lives now, and it is full of courage despite the dark and wet days of October. It does not get irrigated very often, but every morning I stick my head out to it and sprinkle encouraging words on it. "It looks really nice", was the verdict from Christine Wiemann from ‘Spirekassen’, when she has received pictures of the whole bunch. Christine loves winter cultivation and sells boxes of winter crops and accessories and further, she has been on the side-line of my winter cultivation project, giving good advice and uplifting applause. She has mentioned before that I have to make sure that the plants get enough light, and since the two tomatoes, that stood in the west-facing window ledge, are higher than the other two that have got more LED light, it is indicating that they do not actually get enough light, but they stretch to get more light, and thus they become bad plants. Christine has written about the phenomenon, which in technical language is called phototropism.

But all in all, my first plants are well on their way and my considerations now go on whether I should plant more seeds. For example, cabbage and radishes should be good crops to grow in the winter - and in fact, I also have some everlasting spinach seeds left.

The future looks bright, but I will have to see if it lasts forever. 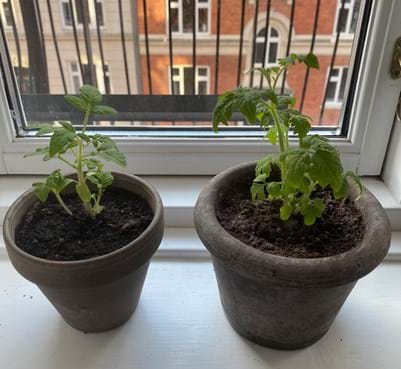 The tomato on the left has received LED light, while the one on the right has primarily received light from a west-facing window ledge - it is larger, but do not be fooled. It is probably because it has stretched to get more light, and thus the plant will not be good. So now the plant on the right also gets LED light. 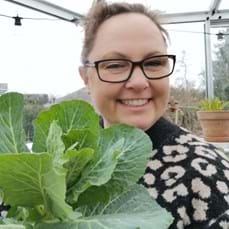 Here are three quick from Christine:

Should I snip my plants?

You can with advantage snip off side shoots on a tomato plant, to get a longer and more productive plant. Dwarf tomatoes should not be snipped, but make sure they get enough light, so they do not stretch too much.

Do they need fertilizer?

In general, plants should not get too much fertilizer in winter, but both tomatoes and chillies need some to form fruits. Fertilize them once a week. Just use a regular fertilizer - it does not have to be any particular kind. The many different types of fertilizer make sense if you grow in a professional environment, but as a hobby cultivator, a regular all-round potting fertilizer is fine.

What about those flies that have started swarming around one plant?

If you find that small flies suddenly swarm around your plants, it may be because the upper part of the soil in the pot is saturated with water. Irrigate from below and if necessary, replace the top of the soil with new soil. It may be a good idea to check your plants once a week for pests - remember to look at the underside of the leaves and if you find lice or anything else, you can buy predatory mites to fight them with. 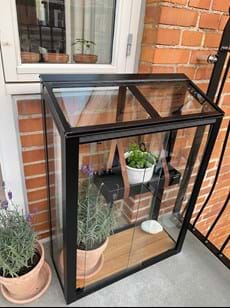 The greenhouse is called Balcony and is perfect for you who has a smaller balcony. Read more about the product on greenhouses.com