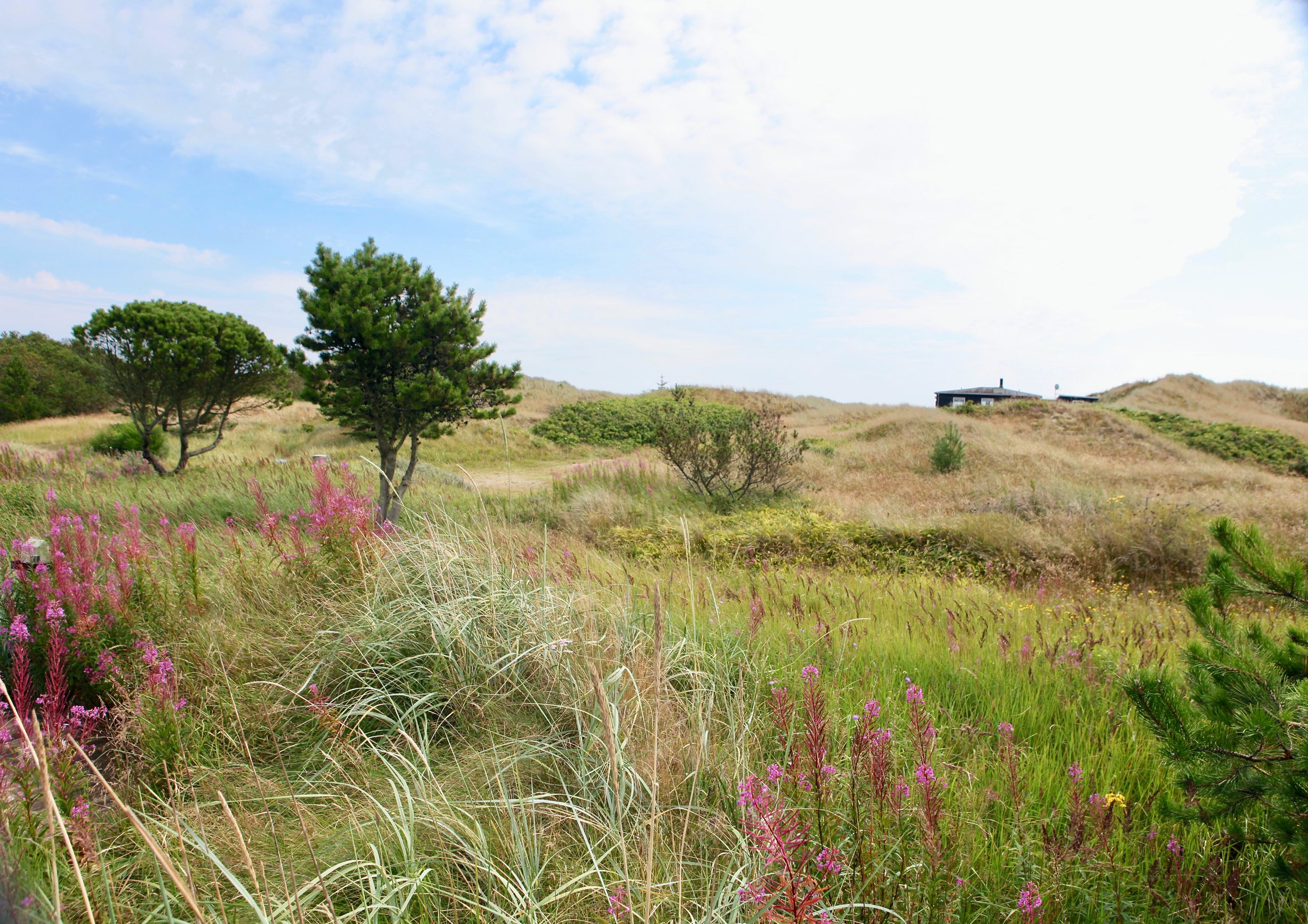 We mow the lawn approx. 40 times a year, and from that perspective, lawn mowing is what we spend the most time on in the garden. Therefore, it may seem somewhat strange that a garden designer now wants us to plant even more grass in the garden. But the plan is to create more biodiversity in an orderly way.

We see it more often now and in many places. We let the grass grow. However, we do it in very different ways and so different that it might cause some tension between neighbours.

Many green areas of residential roads and housing associations are not mowed, and in the roundabouts grow wildflowers along with grasses, and what some would call weeds.

The greatest plant on the earth

Tall grasses are much different from lawn grass. In fact, lawn grass is not at all apt to be long. It is bred to be short.

At first glance, one would think that grass does not have much significance for biodiversity, butterflies, ants, bees, beetles, spiders and all the insect life that, according to science, is sprayed 80% back. The grass is of great importance. Perhaps we are not recognizing that grass is eaten by many animals and humans. Cereals, for example, are also grass. The grasses give small flowers that give pollen but not nectar. It sets seeds that many birds feed on and especially tall grasses are a hiding place for both small and large animals. It also protects many insects from the cold in the winter. In other words, the grass is an important plant for biodiversity, and we can easily get more tall grass in the gardens than we have now.

A need for more grass

The Danish designer and garden creator Nina Ewald thinks we have far too little grass in the gardens. She does not think of the lawns, but of the slightly taller and more decorative grasses. They give the garden much more character than just flat grass, and many types of grass look amazing in the winter when left with rime frost or snow on their leaves and ears.

Apart from silvergrass, there has not been much use of grass in the gardens. Times change, and as people want more nature in their gardens, the grasses emerge. They give the gardens a look that is natural but in a cultivated way.

"People are afraid that their garden will get too wild and cluttered and passers-by will get the impression that the garden owner lives there in a jogging suit sitting on his sofa and drinking beers", says Nina Ewald.

According to her, the garden should preferably show that we are in control of it.

"Therefore, biodiversity can be created in a perhaps more orderly way by using the refined grasses. They are very easy to control. They do not spread their seeds to the same extent as the wild grasses, nor do the roots shoot throughout the garden to the same extent", says Nina Ewald.

In addition, it is easier to care for grasses than wildflowers. A wildflower meadow is not just something you create. It must be cared for precisely so that the grasses do not take over.

Loads of tips and knowledge

The chief guru in the world of grasses was the German Karl Foerster, who already in around 1950, made people aware of how grasses could be integrated into a garden. Around 1970, grasses became an important part of American landscape architecture. Grasses became an important part of what is termed a naturalistic plantation. Which means a mix of grasses, perennials and small shrubs that are planted together in a more natural way. This means that different plants and shrubs are mixed with nature as a model.

The three grass families. The grass family consists of grasses, sedges and rushes. There are more than 15,000 species of grasses, which make up the majority of the earth's total vegetation.

The largest of all groups. They have knees, ie. thickenings on the stems. The stems are usually hollow. The leaves have a two-row leaf position located opposite each other in two rows on the stem. The flowers are compound small ears. Many grasses are dioecious species that require pollination by other plants of the same species. This takes place by wind pollination.

Looks like grasses. They are easily recognized from the "real" grasses by having marrow-filled stems that are often triangular and lack knees. There are both male and female flowers on the same plant. They are therefore monoecious and self-pollinating.

It is the smallest family and is found especially in the southern hemisphere. The stems are round and marrow-filled, the leaves oblong and round. The rushes family has both monoecious and dioecious species in the family.

There is nothing that beats nature's natural vegetation as in this case and it is difficult to completely imitate in the garden, because the soil has a decisive importance for which plants thrive. 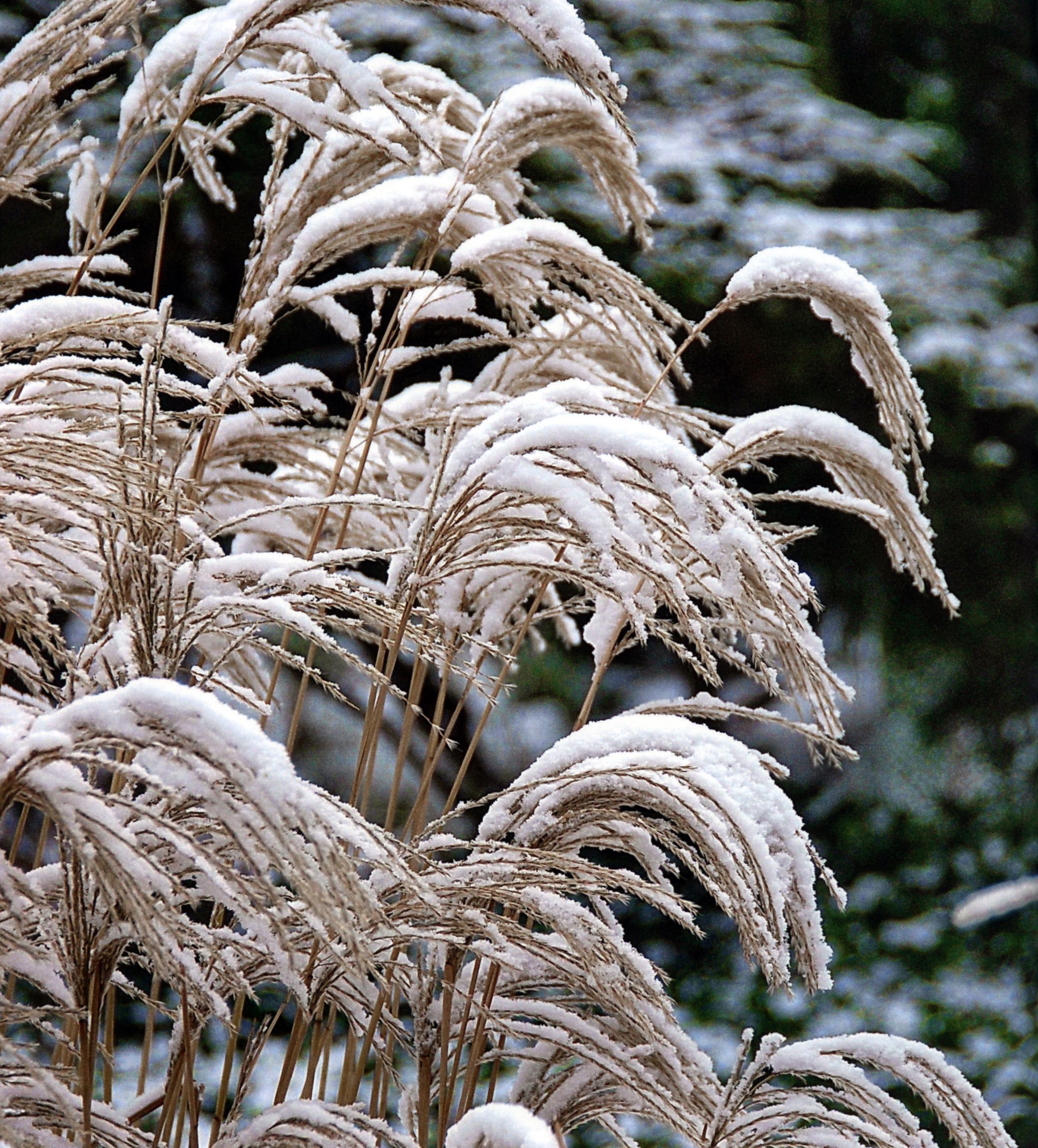 Grasses are beautiful all year-round. In the winter they are often covered in snow or rime frost. 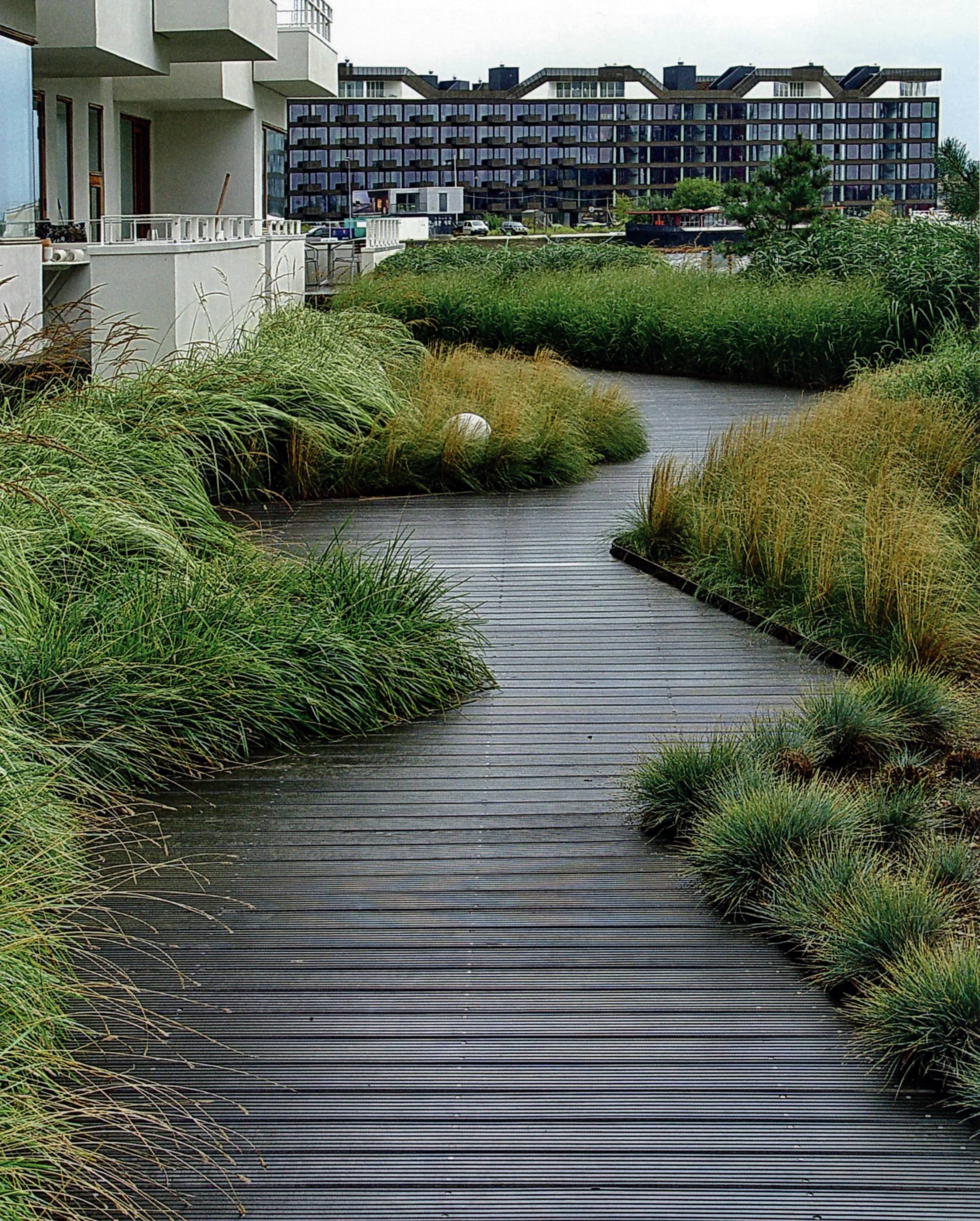 Plants along a pathway is often challenging, but grasses create a nice transition. 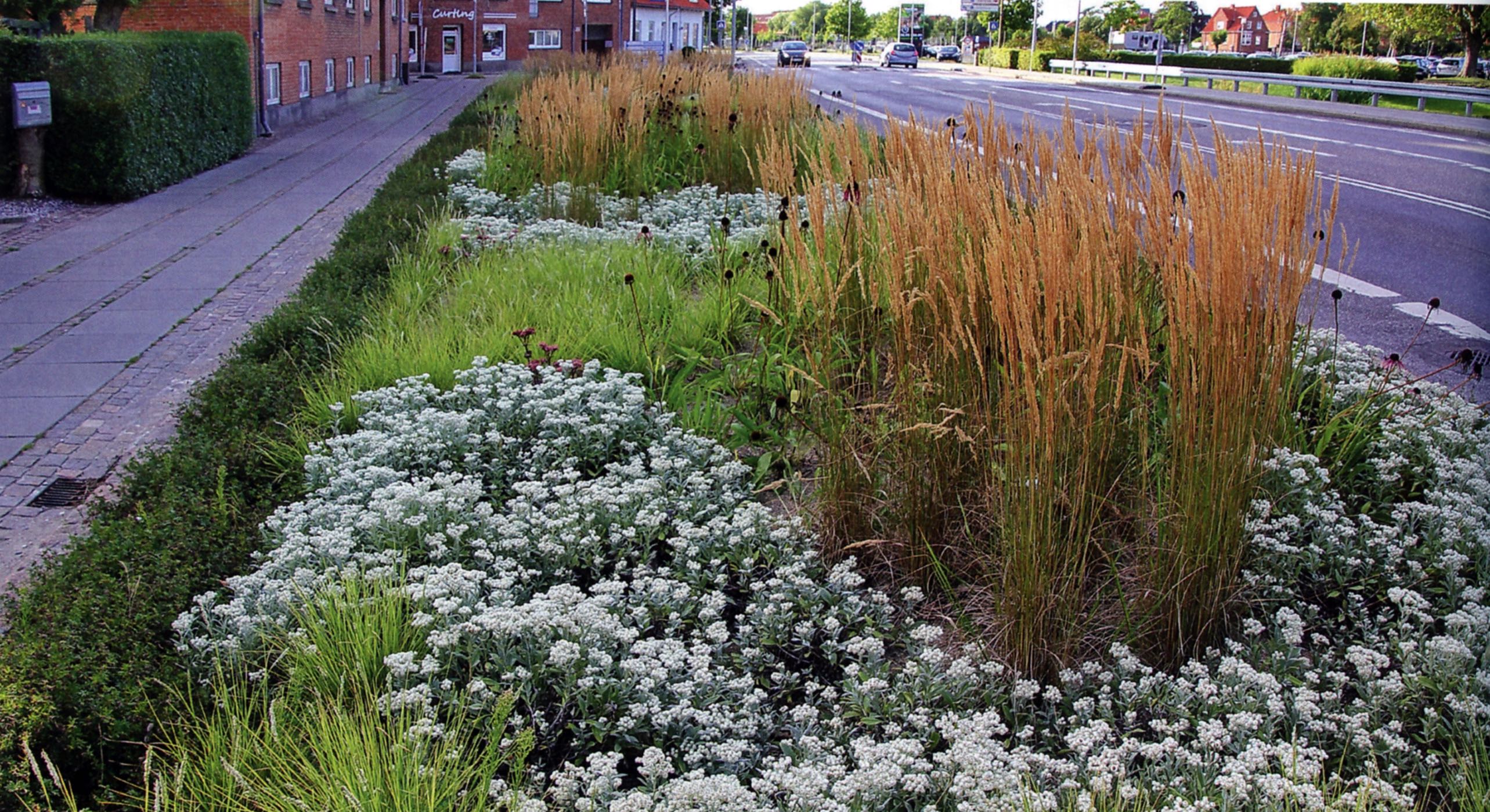 It is not everybody who loves the wild nature, but this is a nice mixture of the wild and cultivated. 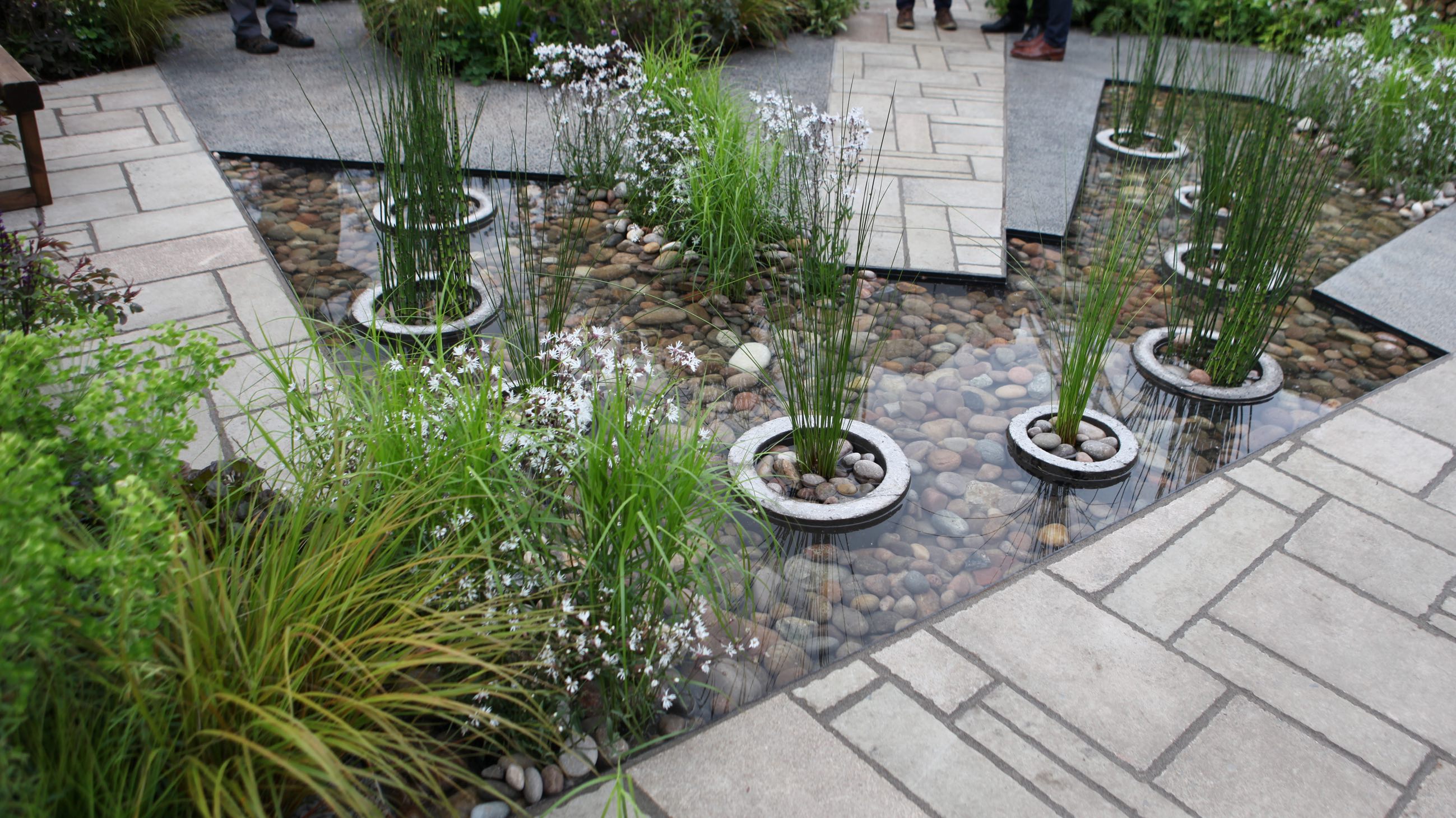 Water is a nice place for grasses too. Grasses and rushes break the surface and attracts insects. 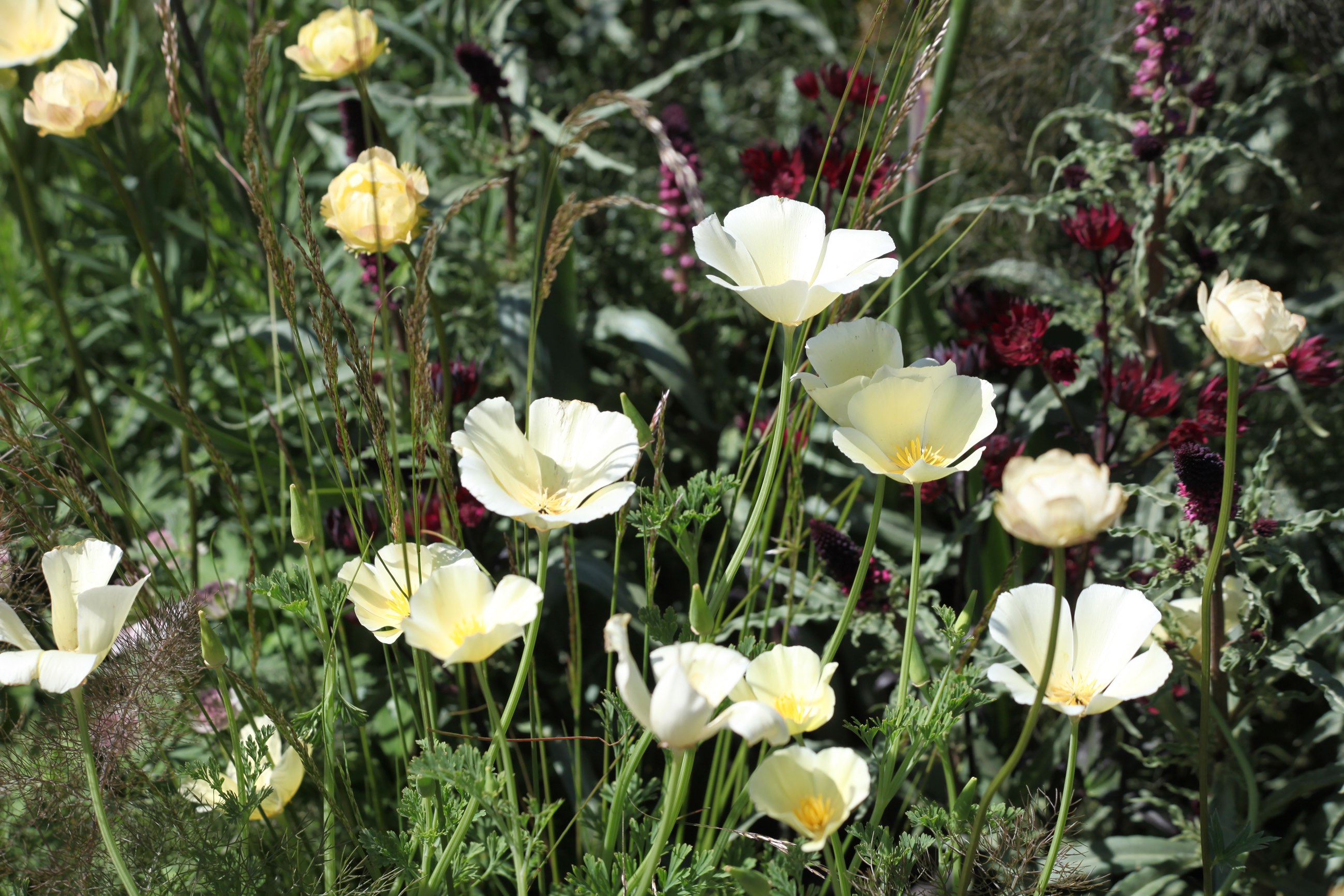 Perennials and grasses complement each other very well. 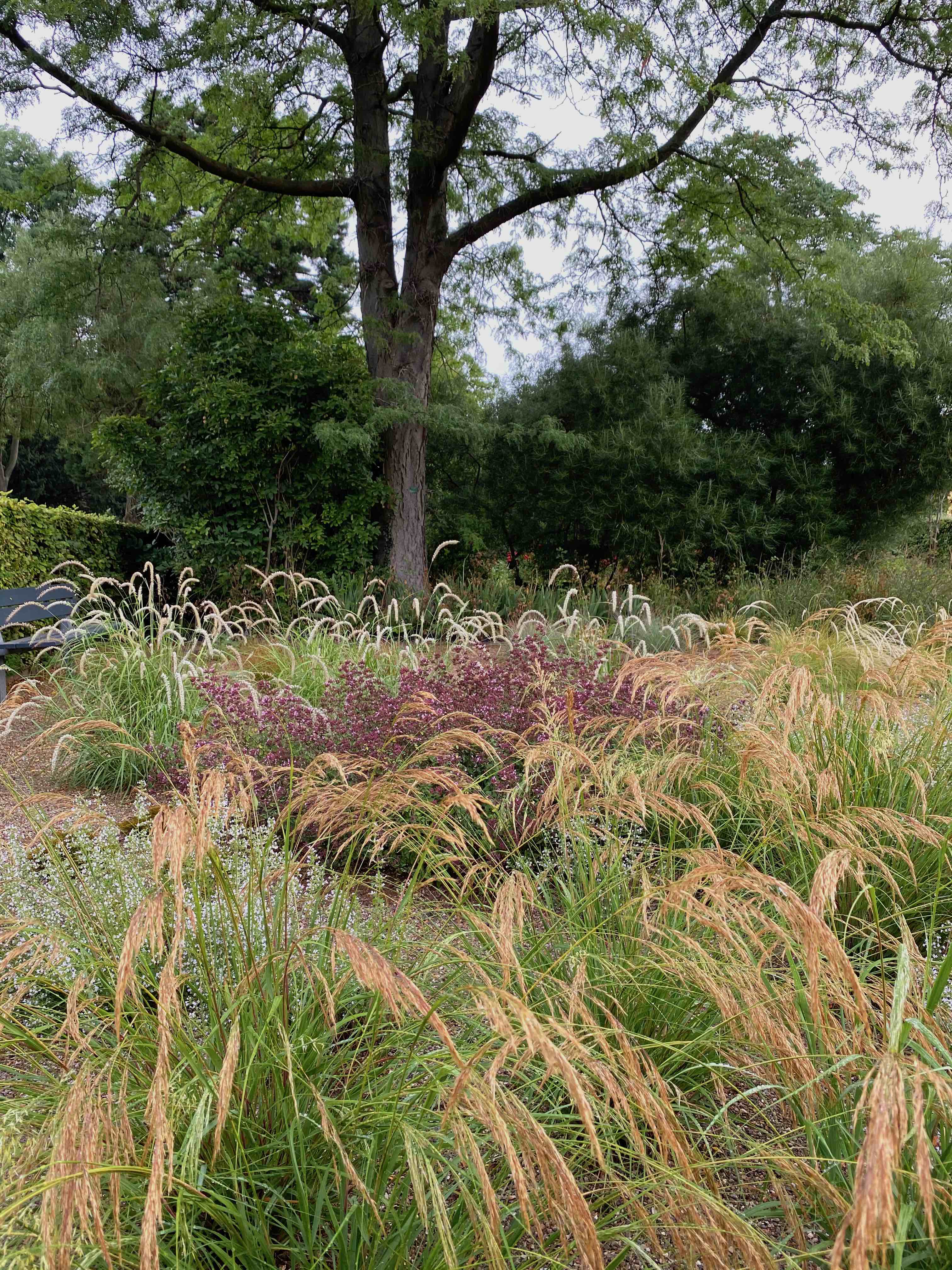 There are grasses in countless sorts and colors, so there is something for everyone.