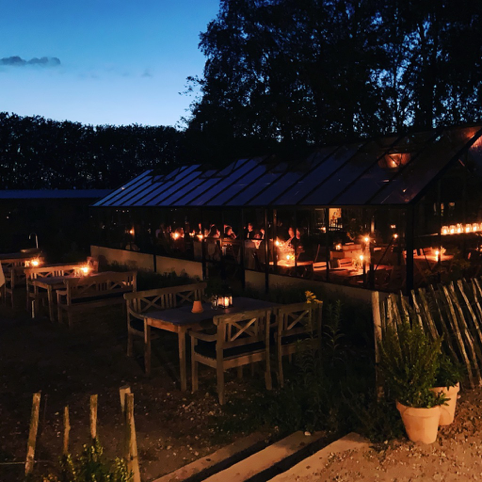 Good planning and preparation can usually prevent many headaches. But when you have one supplier casting the foundation and another supplier assembling the orangery on the foundation, and the two suppliers never meet, it gives the owner a headache. Will the foundation fit the base of the greenhouse?

Early in the process, we agreed that we would cast a solid and insulated foundation when we were to establish the orangery. In the long run, this will help us to make the orangery usable all year round in connection with our restaurant and activities.

I just have to say that it's a really good feeling to make a foundation. Seeing the grab in the ground is a wild feeling. It is the first real physical step on the way to the end goal.

But when it comes to digging, you often come across surprises. In large building sites, the construction may encounter burial sites and finds of treasure troves, but here at Rabarbergaarden nothing that exciting happened. It turned out that the remains of an old but large brick water tank was in the ground. It has probably been used many, many years ago when the farm had a plantation. However, the well has been closed for a long time before we bought the farm, so there was nothing to do but dig through the rubble and get them up.

When they are up, you have to find out what to do with them. For us, there was no other way than an incredible number of trips to the recycling depot, where they can hopefully be of great benefit and usefulness in a new form. 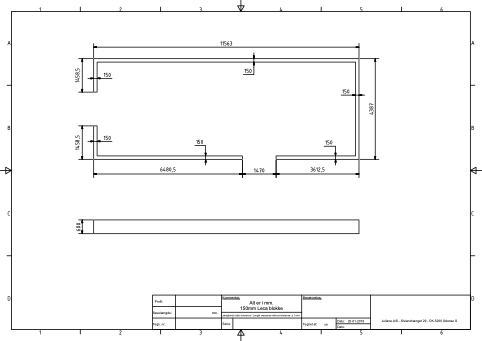 Do the drawings fit together?

The Juliana model we had chosen - a Botanica, was a standard model. That means nothing could be adjusted subsequently if it did not fit the foundation.

We had teamed up with a skilled construction company to cast the foundation and the base on which the greenhouse itself was to be mounted. But how wide was the base? And where should the main construction of the orangery be, on the base or in the foundation? And then there is also the appearance. Will it look strange if the structure is cast into the foundation? Will we lose height, so the greenhouse gets so low that you must duck to get in? All that is not known until everything is assembled.

This may sound like a fairly simple thing to solve here on paper, but when you live in a place where the winter storms can take hold, you have to consider everything carefully.

The structure had to be cast in the foundation, so it would be able to withstand the strong storms and gusts of wind.

It did not ease the work and headache in any way, because now it was a few inches of accuracy that was at stake. The very best thing would have been if the contractor and assembly people could sit down with the drawings and agree on how that task should be solved. But there was no possibility that they could meet physically. Therefore, we acted as intermediaries, where we tried to the best of our ability to convey goals, numbers, drawings, and questions between the professionals.

The day dawned where the pit was finished, the ground levelled, the insulation put in along with the mesh reinforcement, and the formwork had been set up. Then came the concrete cannon - a large concrete mixer that was driven into the courtyard and concrete was poured out. It is a lot of cubic feet that fall out of such a machine when a good 560 square feet of floor and foundation is to be cast. It gives chills, both because it all takes shape, but also because there is now no way back. It is now that all goals are set, and everyone crosses their fingers that drawings have been read correctly.

The waiting game and choice of floor

Concrete must harden so that you are absolutely sure that it is stable and does not crack. A few days of frost were awaiting, and we crossed our fingers that there would be no frost bursts before it had all dried up. While we waited, we looked at floor tiles. And we just have to say that you can get blocked on the many different options. We ended up saying they should be red, but are you aware of how many shades of red there are when talking bricks? We looked at colour shades over and over, marked bricks and had to go home and consider several times.

We ended up with the WB Red Brick. It had the colour and texture that we thought would only get nicer after wear and tear, and time. After 10 days, the concrete was ready, and the last thin top layer could come on. Once again, the cannon drove up in front of the courtyard and this time it was a fine plaster and many fewer cubic feet that came out. Laboriously, the foundation people now walked around and levelled the concrete. In long slow strokes, with levelling boards, they quietly made a fine and smooth surface that stood wet and shiny when they were done. Everyone admired the work, but no one had seen the cat sneaking in from behind. In a quick leap, the mouse hunter sat on the edge of the foundation. Only thanks to a quick reaction from a workman the cat did not get stuck in the sticky mass. 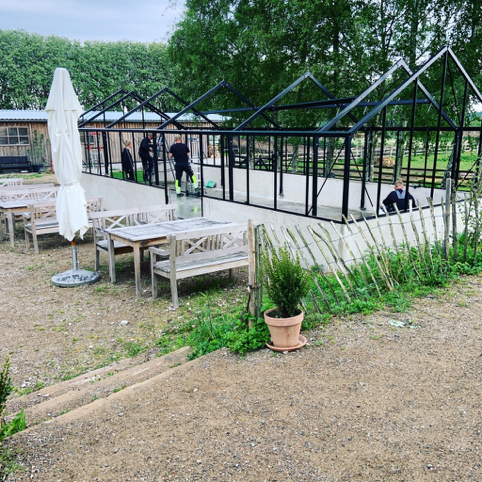 The greenhouse was assembled

One early morning, the Juliana team arrived with the steel construction. Now everything had to pass the test. Would the point castings in the floor fit with steel mountings? Quietly, all parts were laid out, and quietly it all began to rise, one profile at a time.

With a sigh of relief, we could see that all the crisscross communication had worked out. In some places, it was adjusted a bit, but nothing prevented the orangery from being assembled.

It is a wild feeling to walk into such an orangery for the first time. Wow was cool. Now there was no longer any doubt that it would be a wonderful space. A place that in the future would house many good evenings, days, and events. A room that would provide good conditions for beautiful plants that all our guests could enjoy.

It is good that you get so happy and warm inside when you see your orangery take shape because it is not cheap to build large glasshouses.

The foundation is largely like the ones in detached houses, and the Botanica orangery is 560 square feet - all this combined with the fact that we wanted a brick floor means that you need a slightly large budget.

We started out with the following budget:

Plastering of the base and laying of bricks 2,310 pounds

This was our starting point, but when talking budgets and constructions, it is a law of nature that nothing lasts all the way. Nor did it here. What the construction ended up costing, and why we had to wait another four weeks before we could use the orangery, you can read in the next and final part of “The dream of an orangery”.