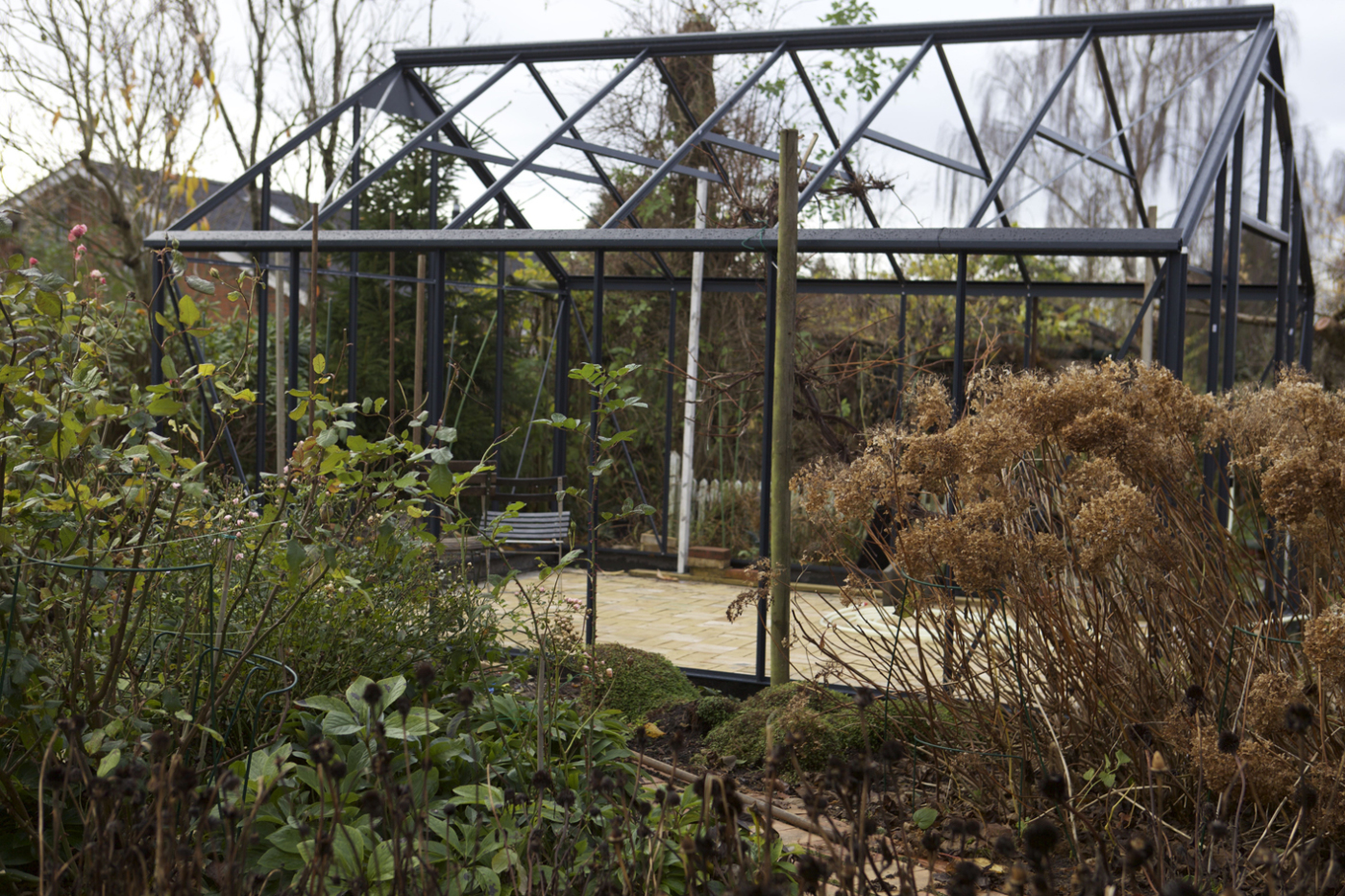 One step forth and two steps back and then forward again

This is my Juliana Gartner of 156 square feet. It's a nice tall house. It has the space I need and is of really good quality. Unfortunately, I have had some obstacles and for that reason, the house has only just now been put up, but it is not finished yet. For me, as for everyone else, it's about hard work.

Here are some step by step pictures: 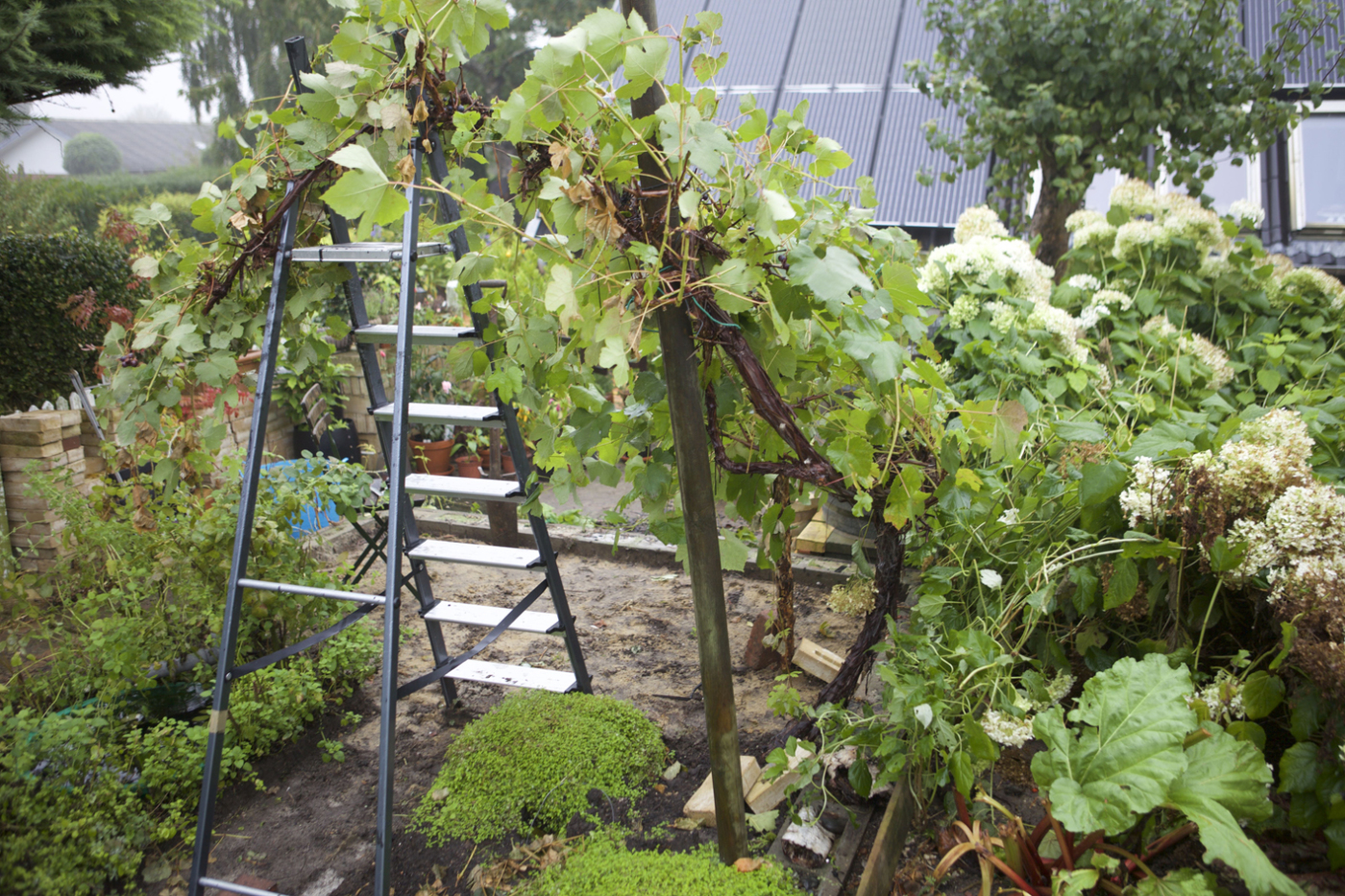 The old house is down. It actually worked really well. Fortunately, it has been taken over by some others and I am sure they will be happy with it. Now my extremely rewarding vine is left without support from the house, so I’m using a ladder. 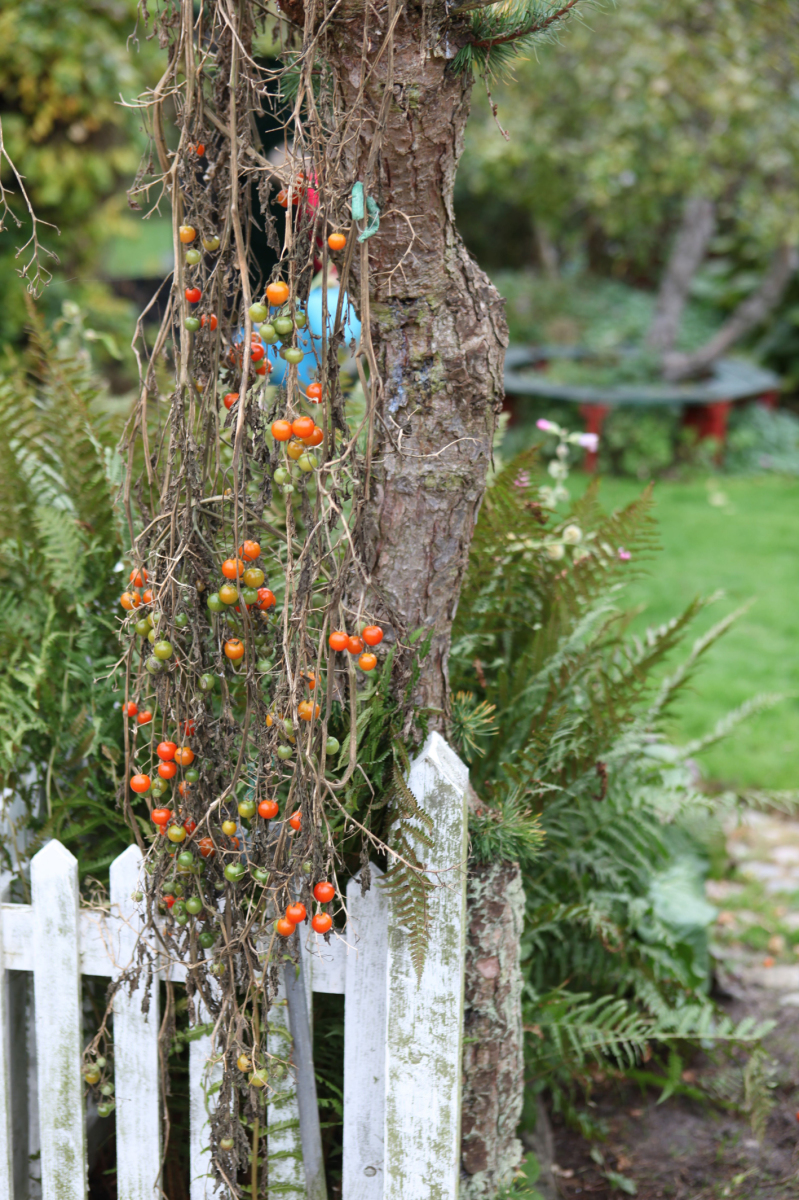 The tomatoes have been removed from the greenhouse and I have hung the stems with the last half-ripened tomatoes in a larch tree, so the sun can ripen them. 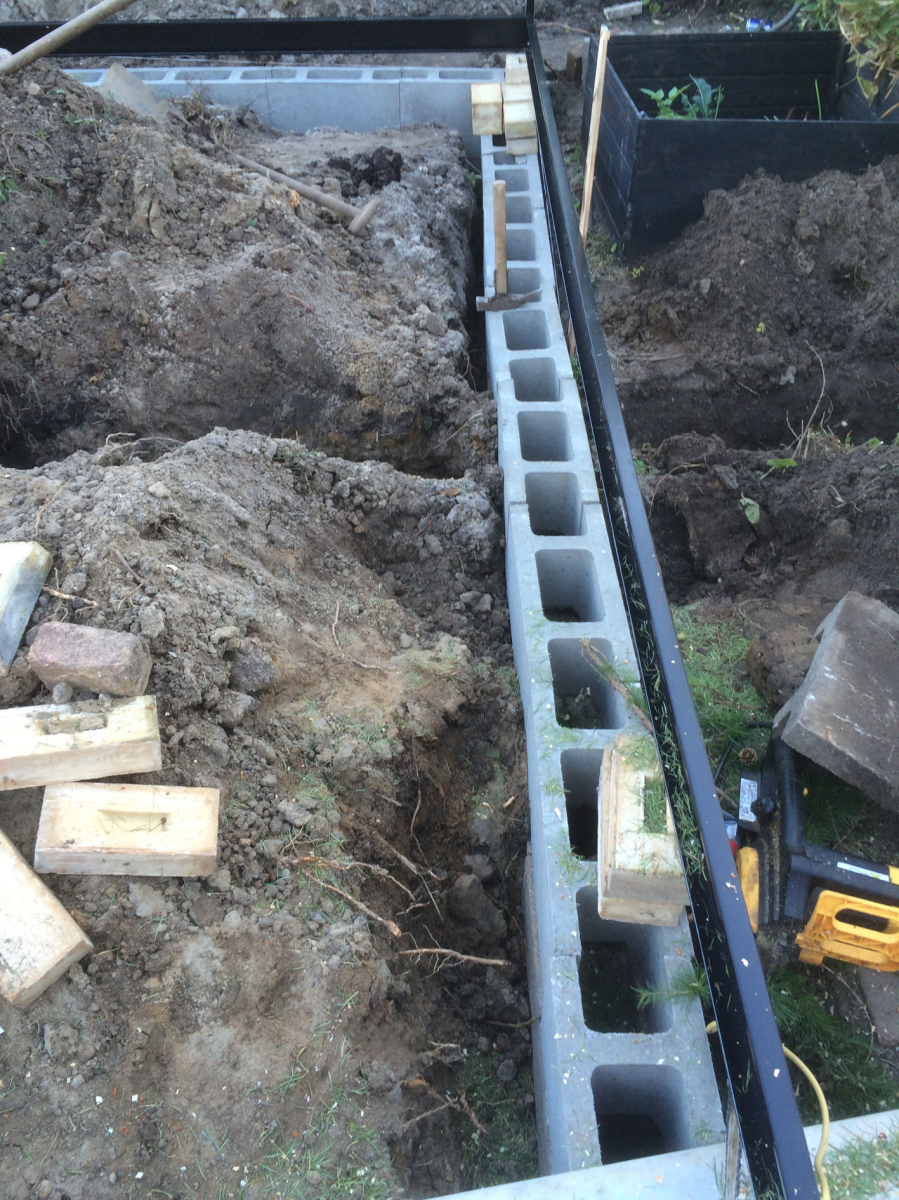 The old house stood on base placed in the ground. The new one is bigger, so here I am digging the hole in the ground bigger so the base can get bigger. My ground slopes so it’s hard work. It is time-consuming. In addition, I like that the house stands a little high, so it has a view of the garden. 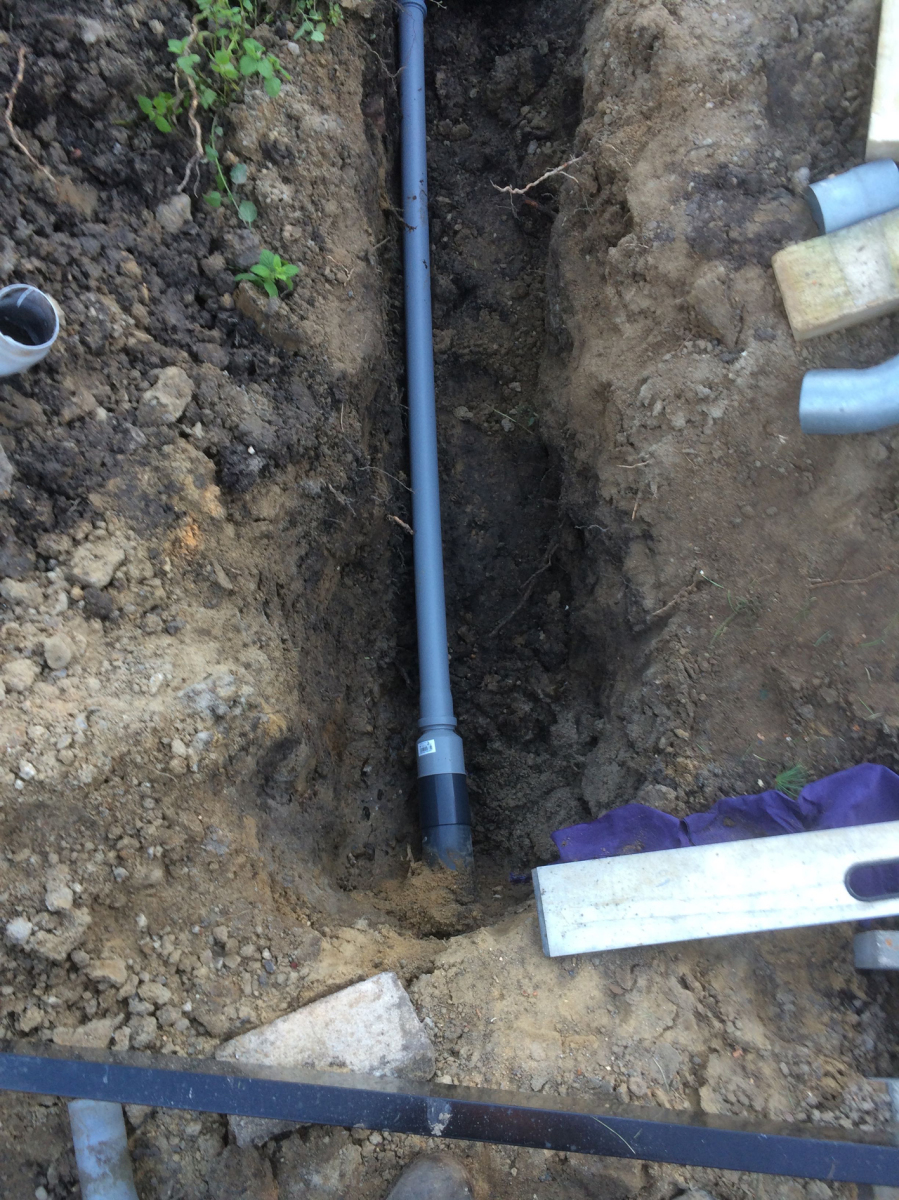 In the old house was a rainwater butt that got water from the roof gutter of my home. Now I will run the pipe out of the house again. I want to make a brick rainwater butt outside the house. Partly to get more space inside the house, but also to make it all a little different. 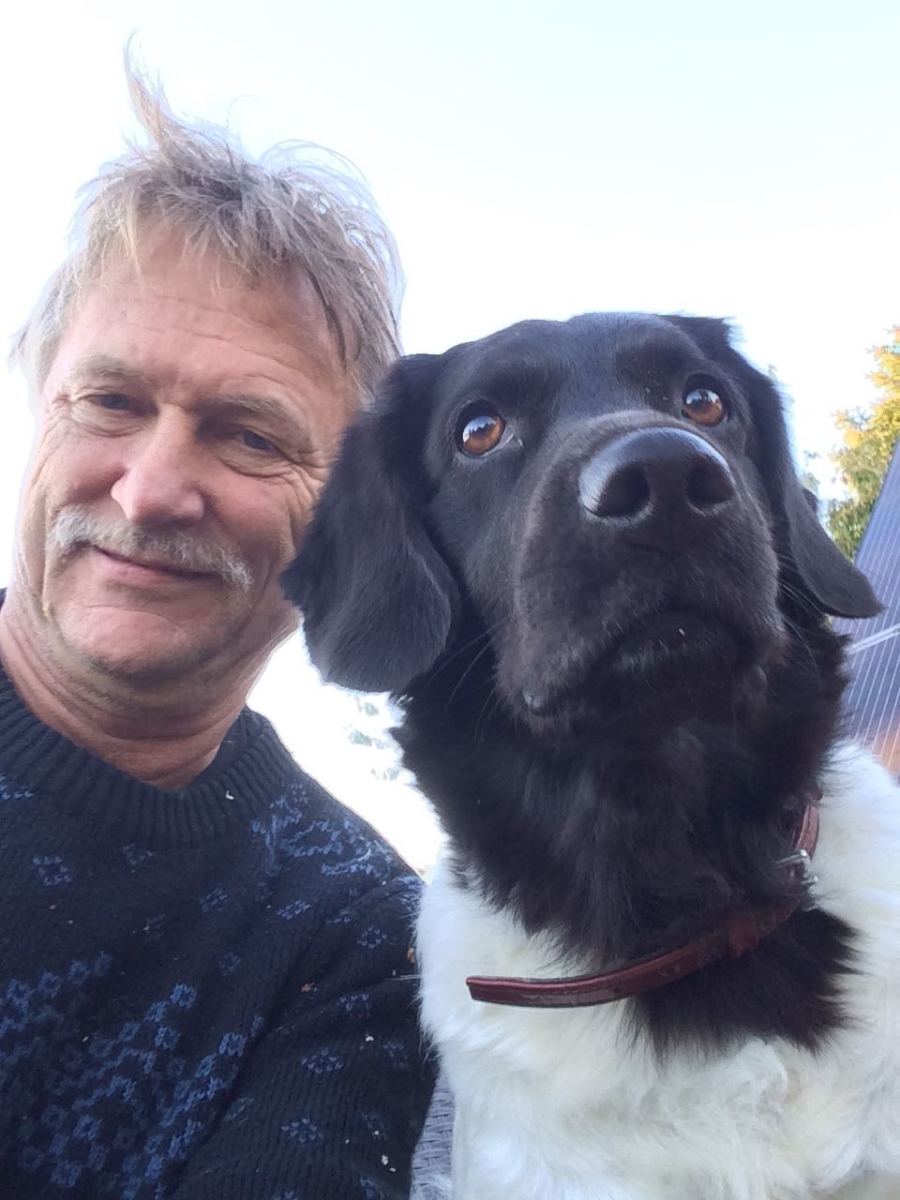 Soya is on vacation at my place and she wants to help with it all, so here’s a selfie. 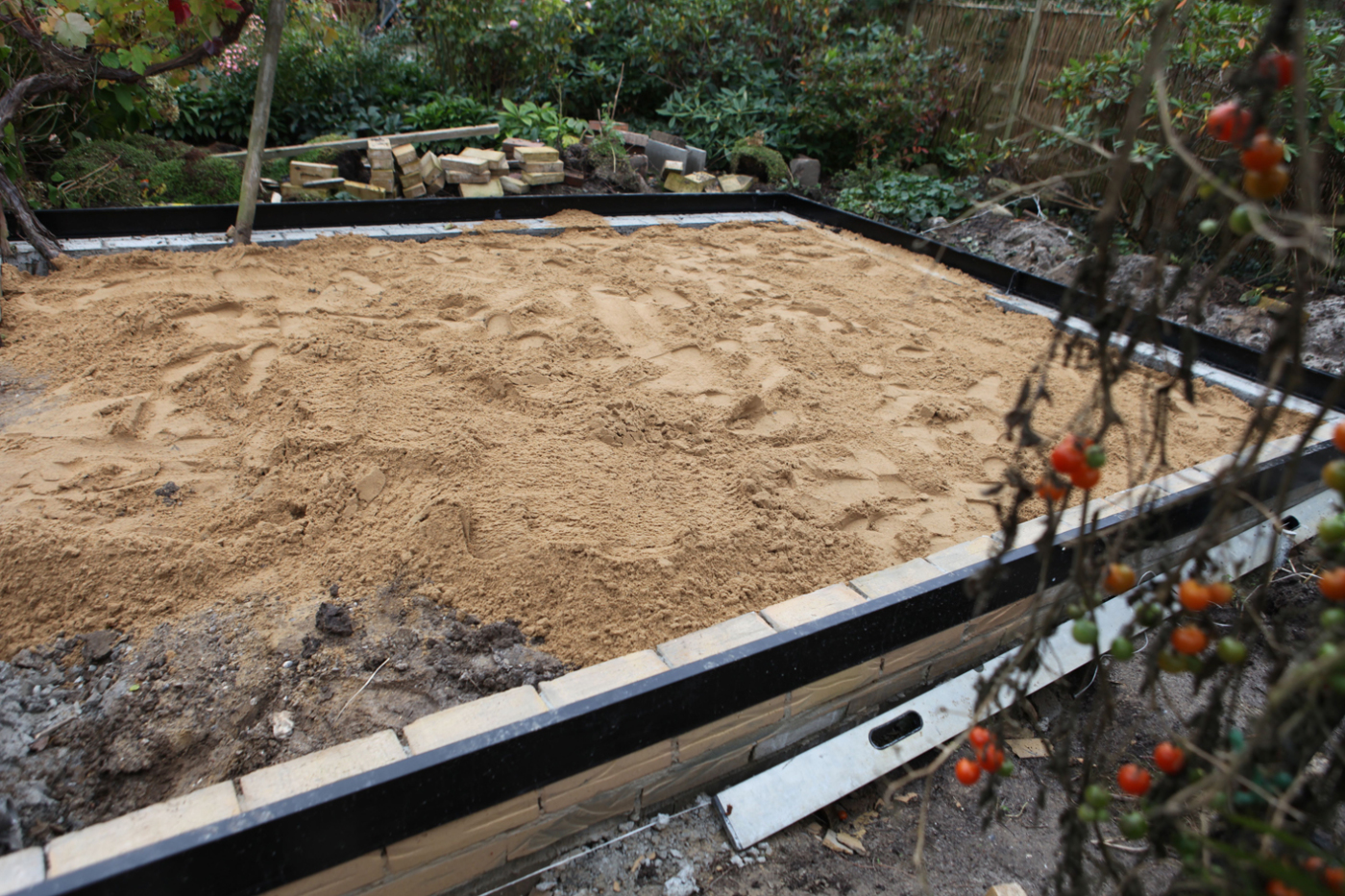 The tomatoes are ripening, and the base has been bricked. You can put the greenhouse on the brick base, but the black base raises the house just 0.3 feet and I like that. 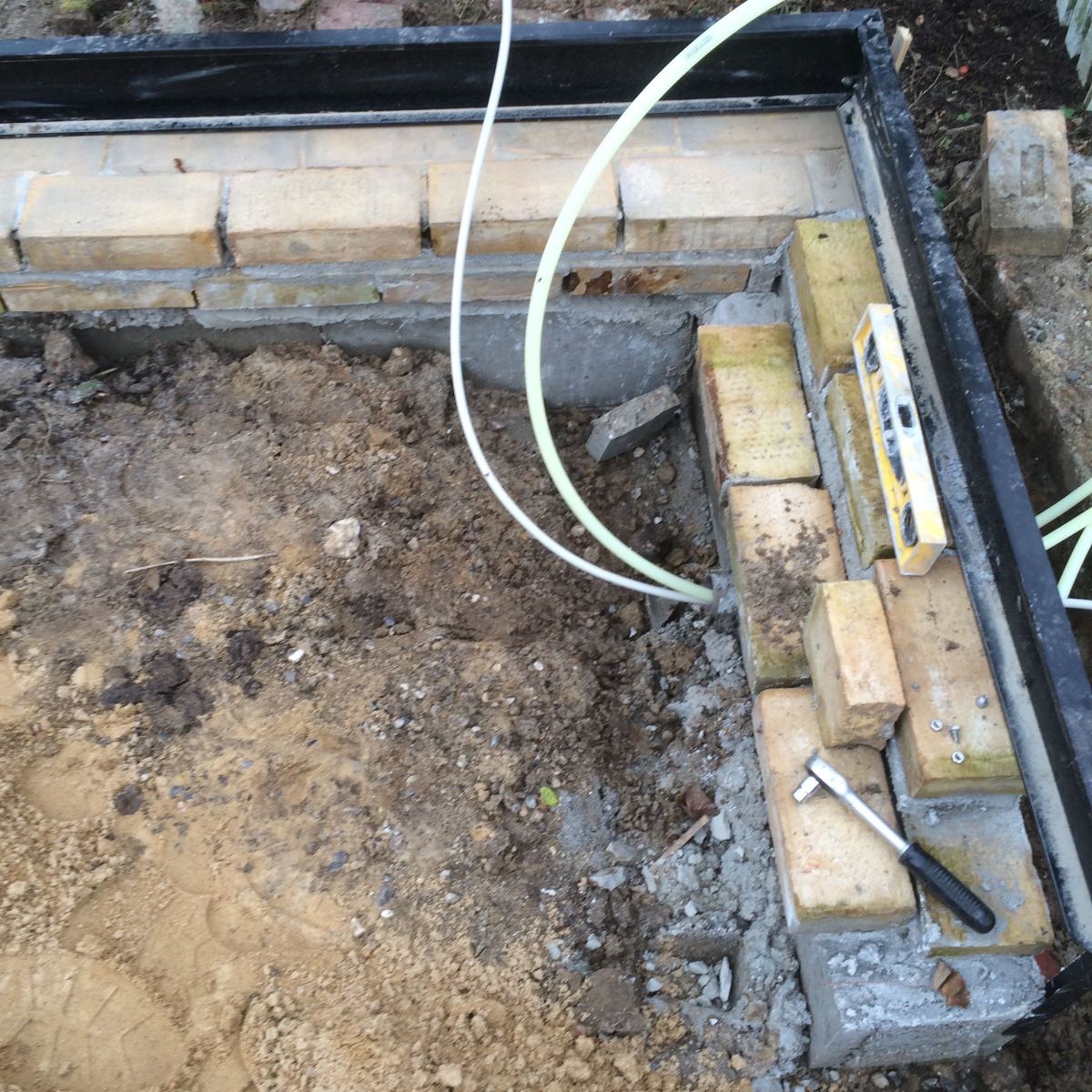 Of course, I need tap water and electricity in there, which is why there are pipes in the base. 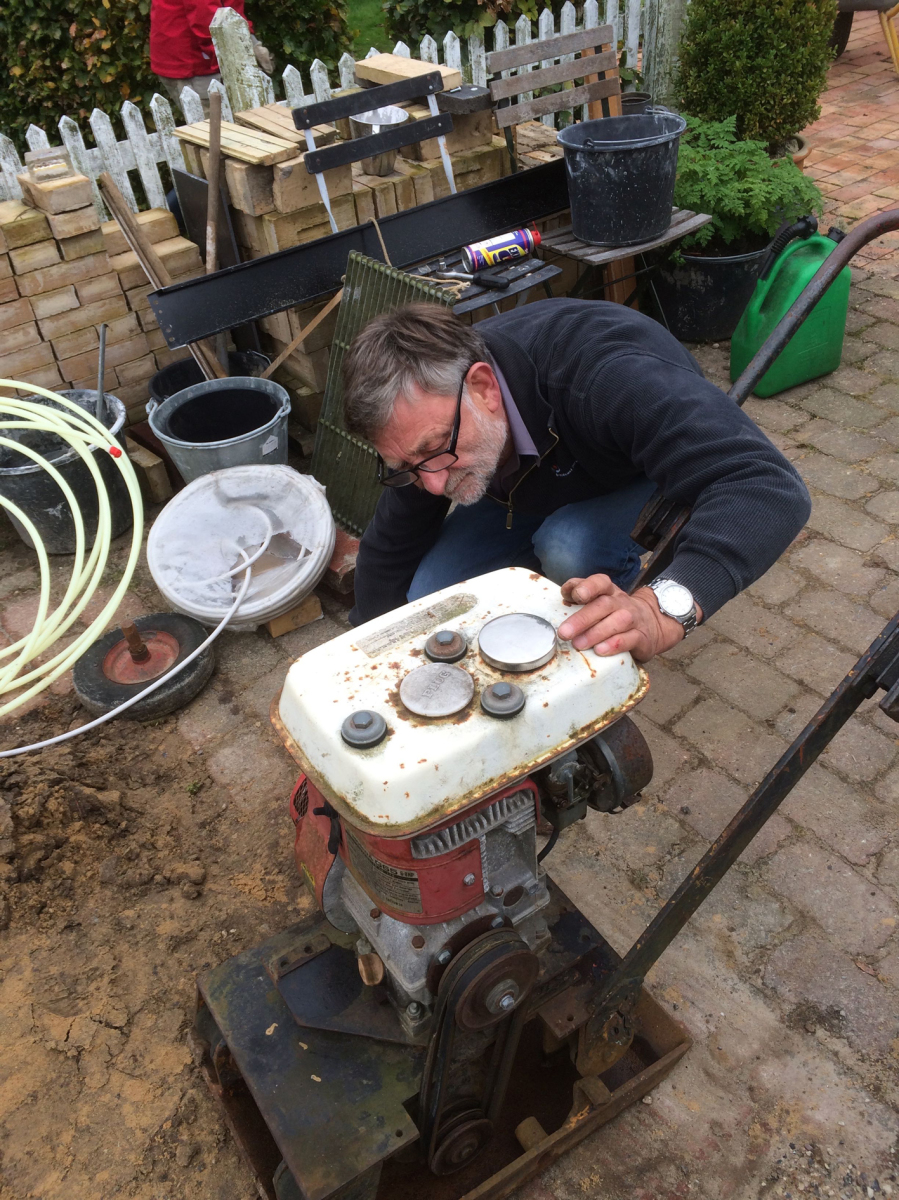 This time I have chosen to have brick floors throughout the house. I mean, I need to try it too. I have grown in beds and straw for more than 30 years and now I want to try something else. Therefore, I must have sand in there, and it must be compacted. Unfortunately, the thing won’t start, but my neighbour Willy will fix that. 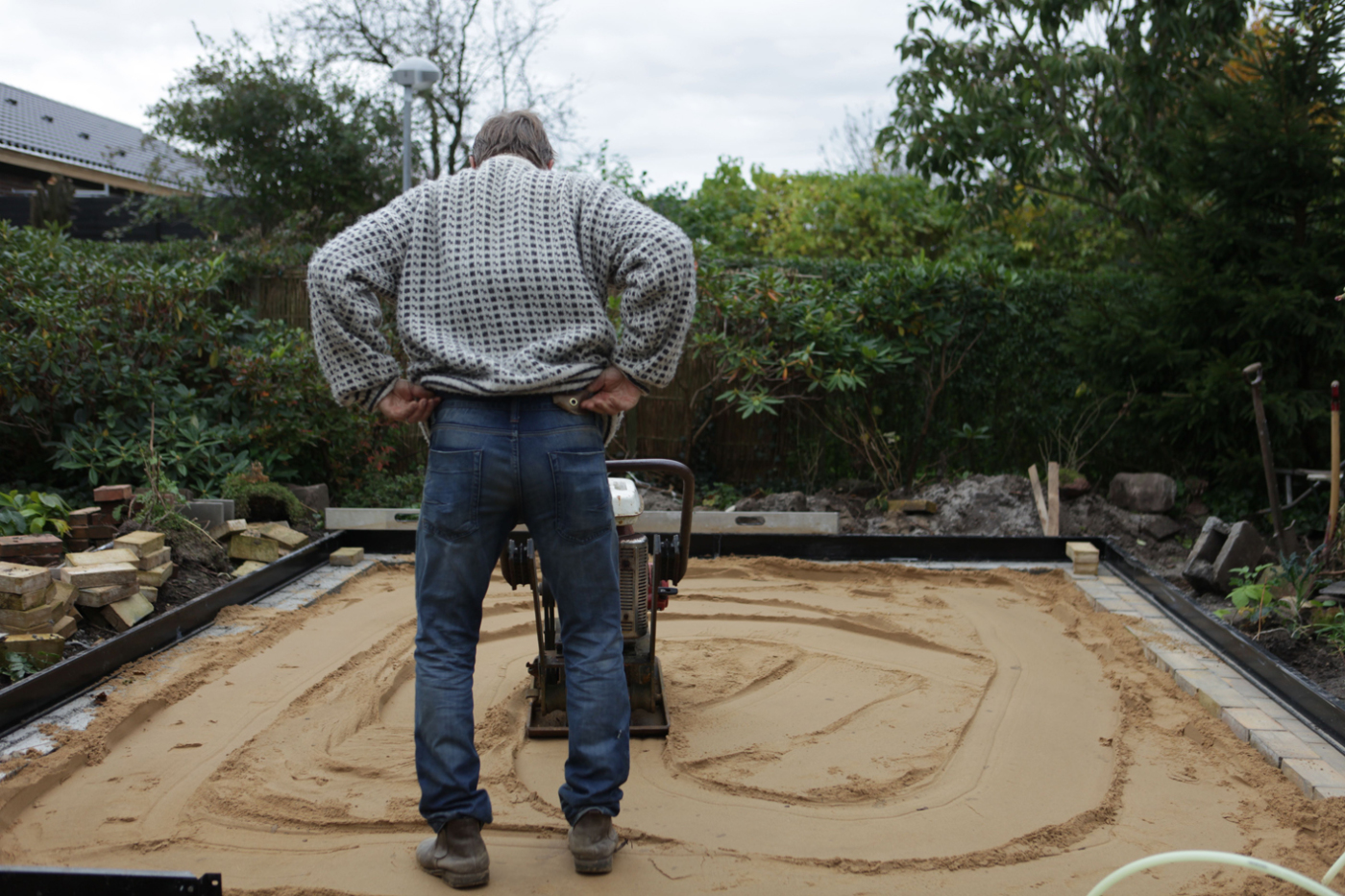 It shakes everything when it compacts the sand so my pants are sliding down. 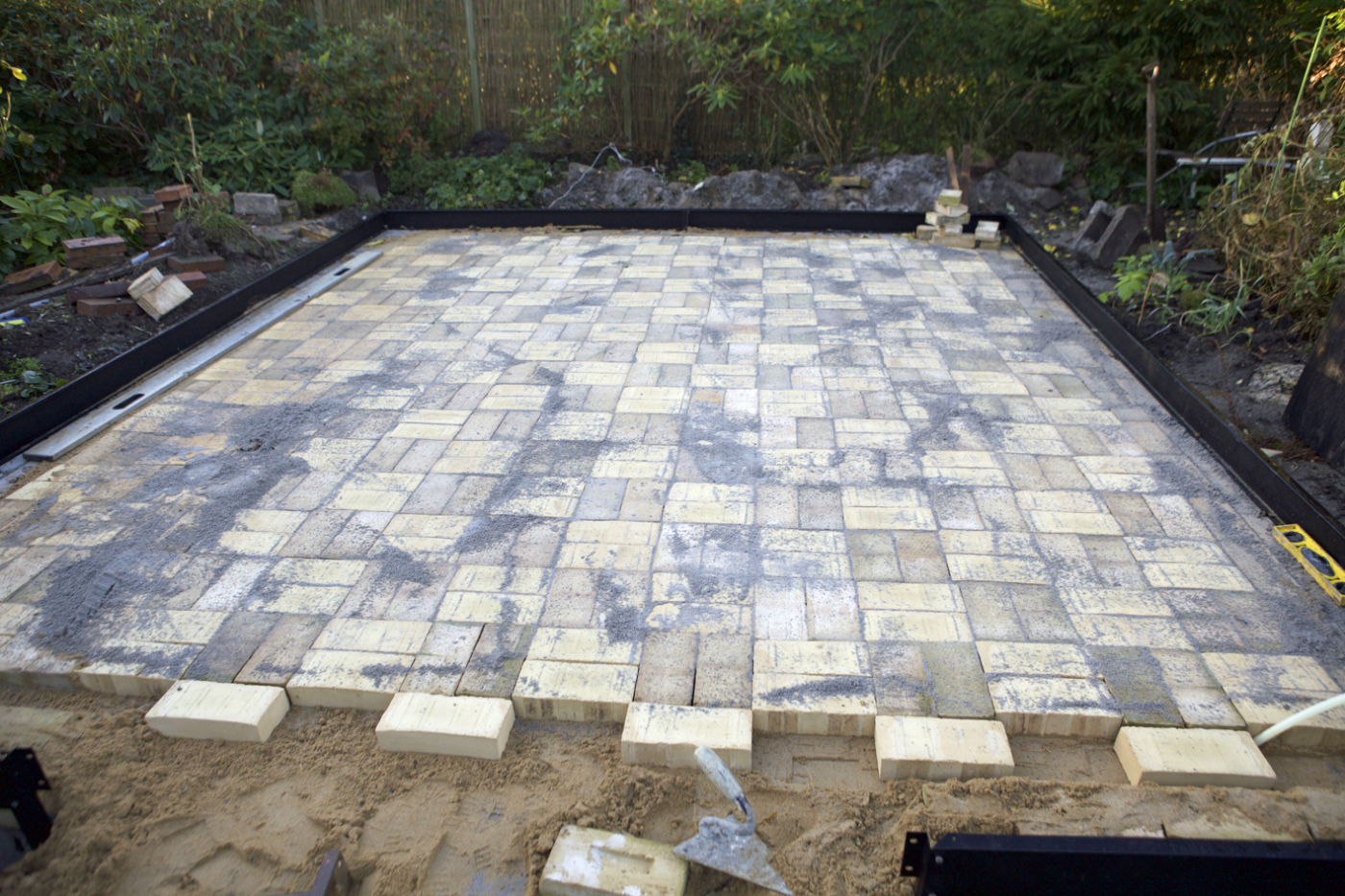 The bricks have been laid, and once the sand was levelled, it was very easy. These are yellow ordinary bricks and yellow Flensburg bricks, which I have had for a few years. The two bricks complement each other nicely. Outside I would never choose soft bricks, but in this dry weather, they should be fine. A pallet of 112 bricks costs 0.42 pounds per brick. The Flensburg is a bit more. 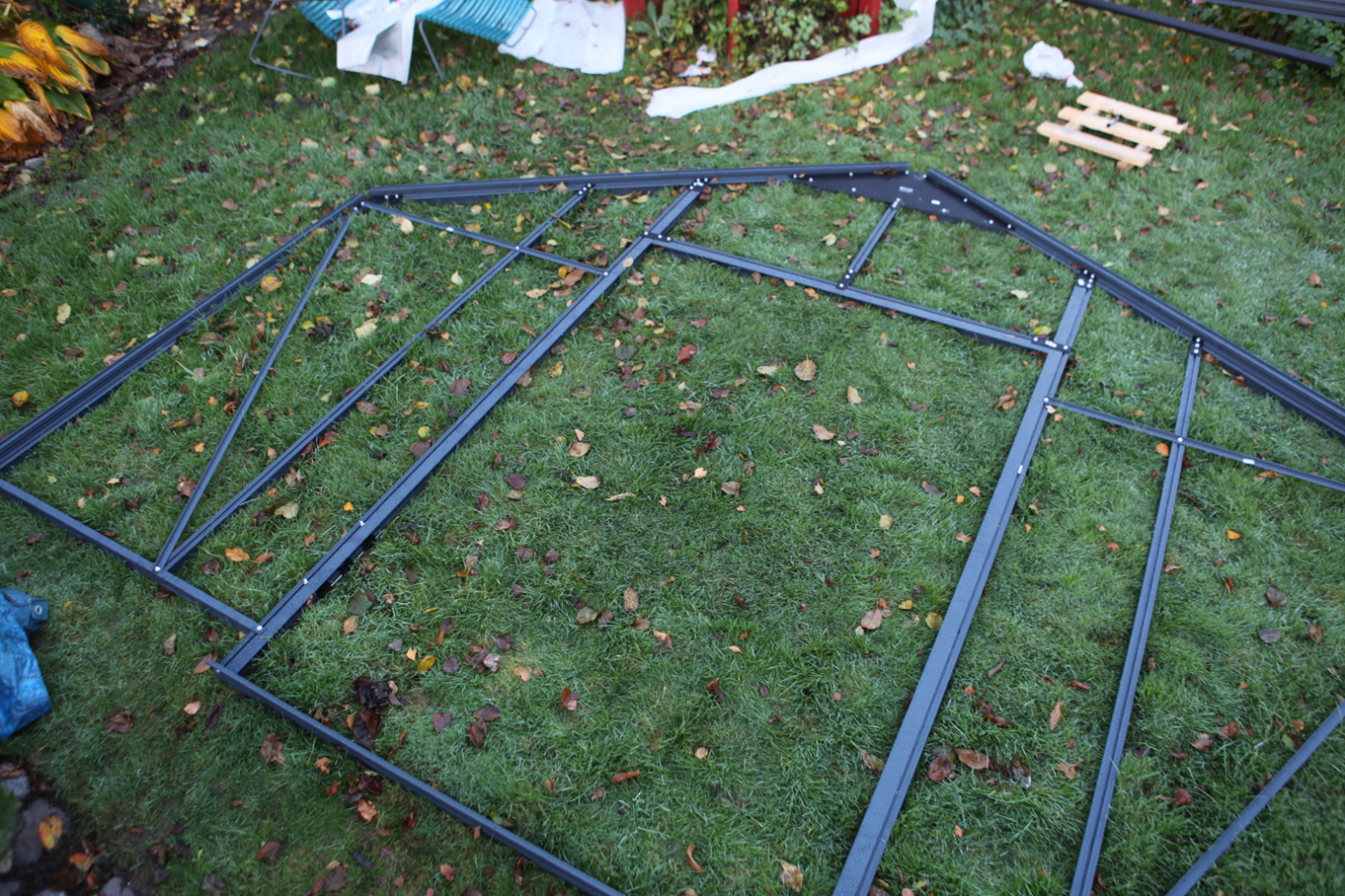 The entrance gable is assembled. I follow the instructions. The assembly of the gable and the sides is well "described". The drawings are logical and straightforward. Later when I assembled the doors it was something different. How hard can it be?! They have they probably thought. Four pieces to be assembled, but they can actually be assembled in many ways. 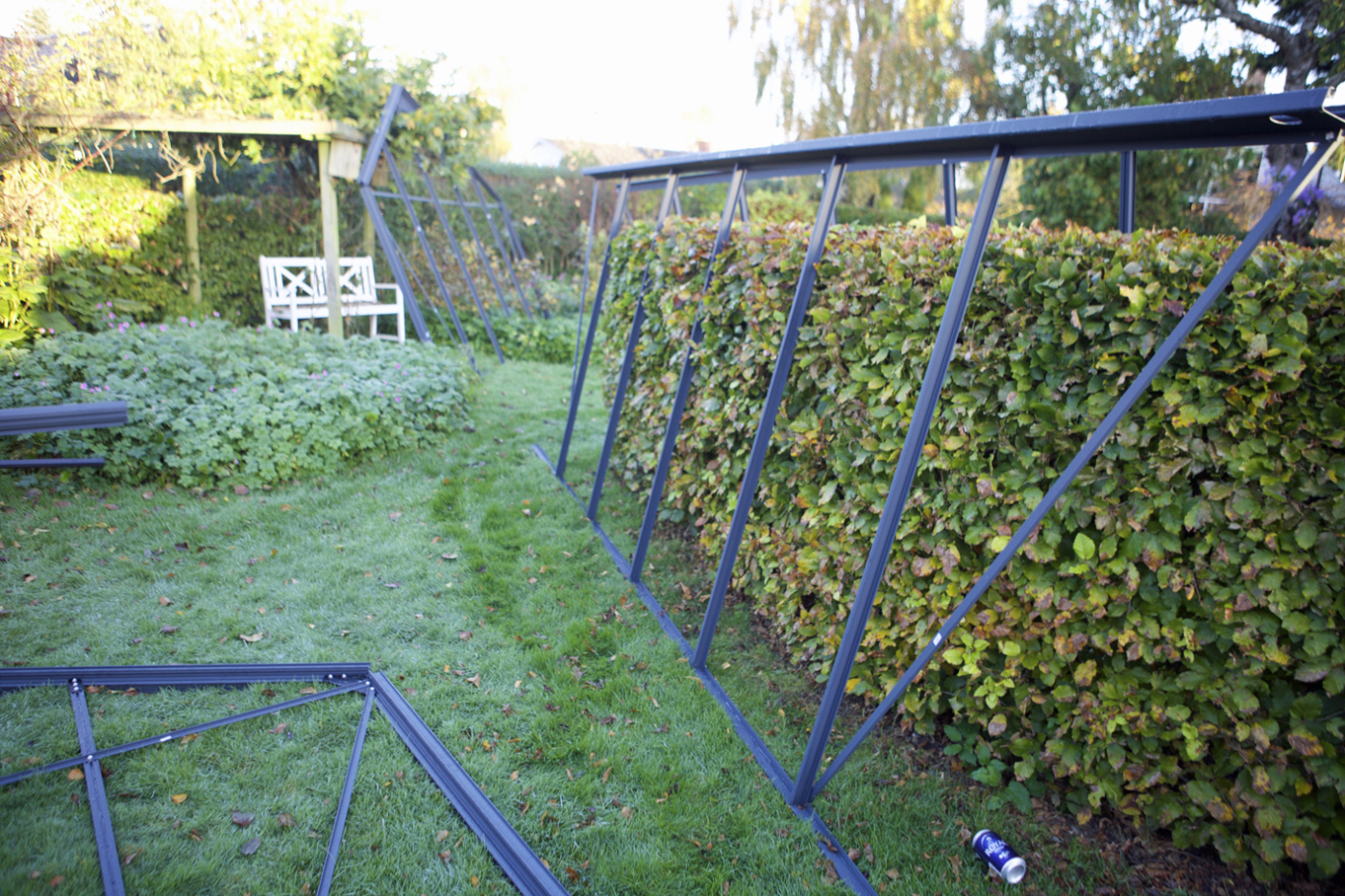 The sides are assembled. They are easier and quicker to assemble than the gable. 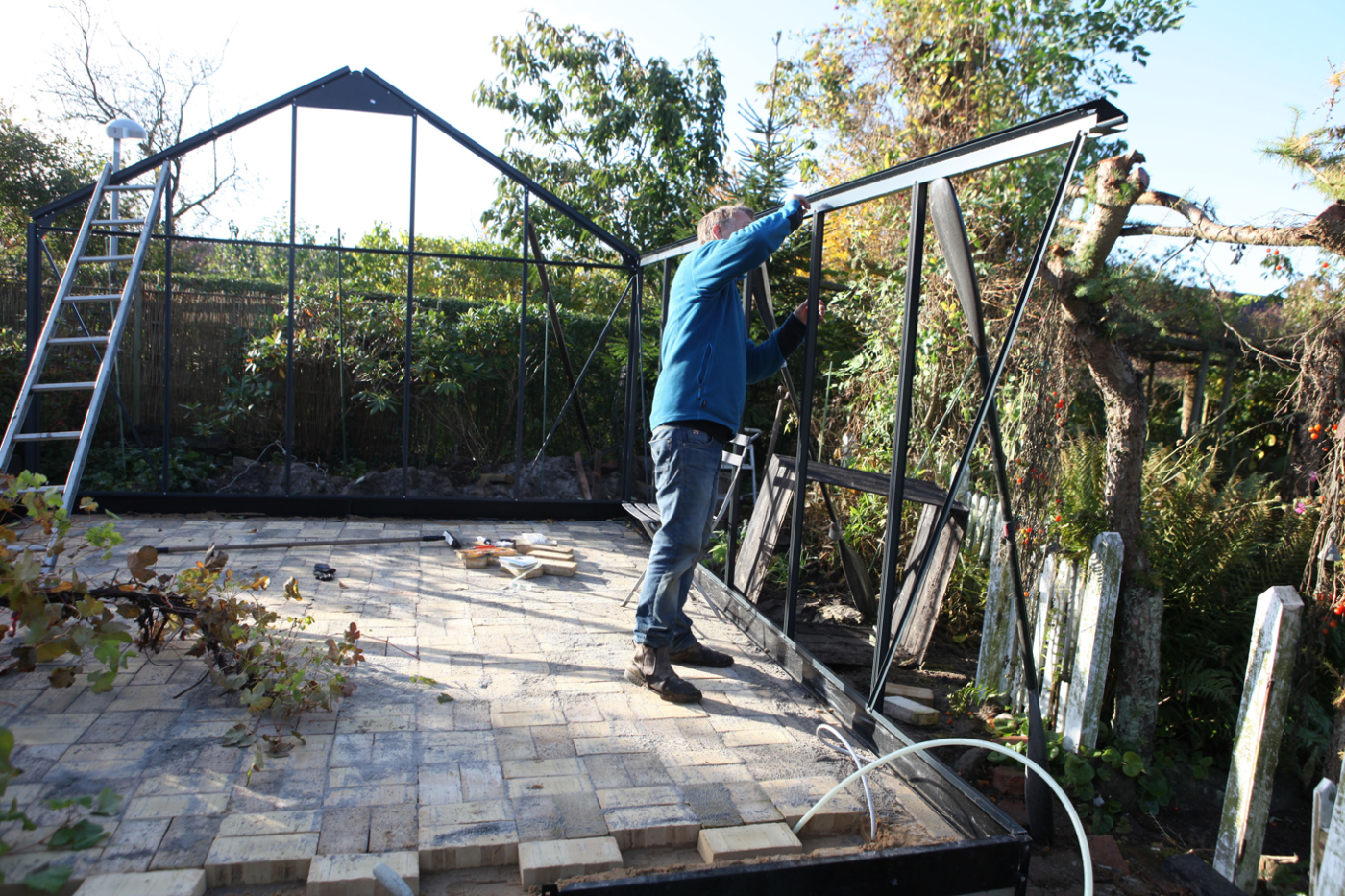 Gables and sides are lined up. Two tips: Have at least one helper, but preferably two. We were initially only two but a gust of wind turned over one side, so the others followed. Subsequently, it blew so much that we had to postpone the line-up for 14 days. So, the second advice is: Choose a day with calm weather. Do not screw the bolts too tightly into the corners of the gable. It must be able to move a little, otherwise, it can be quite difficult to get the sides in place. They must be worked together with the gables. 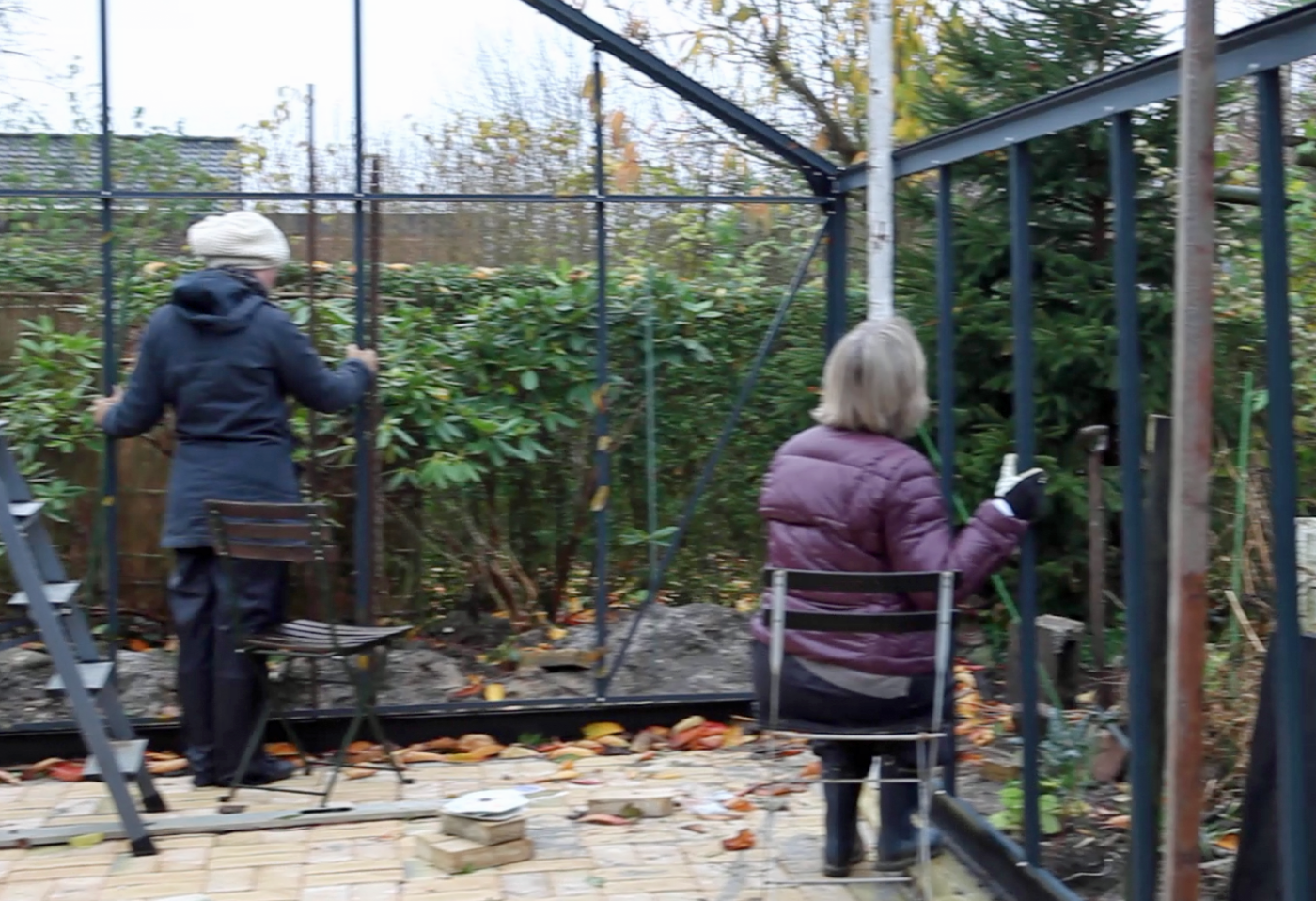 Two helpers are better than one. Notice the supports by the sides. Should there be a wind from the west, the sides wont fall. 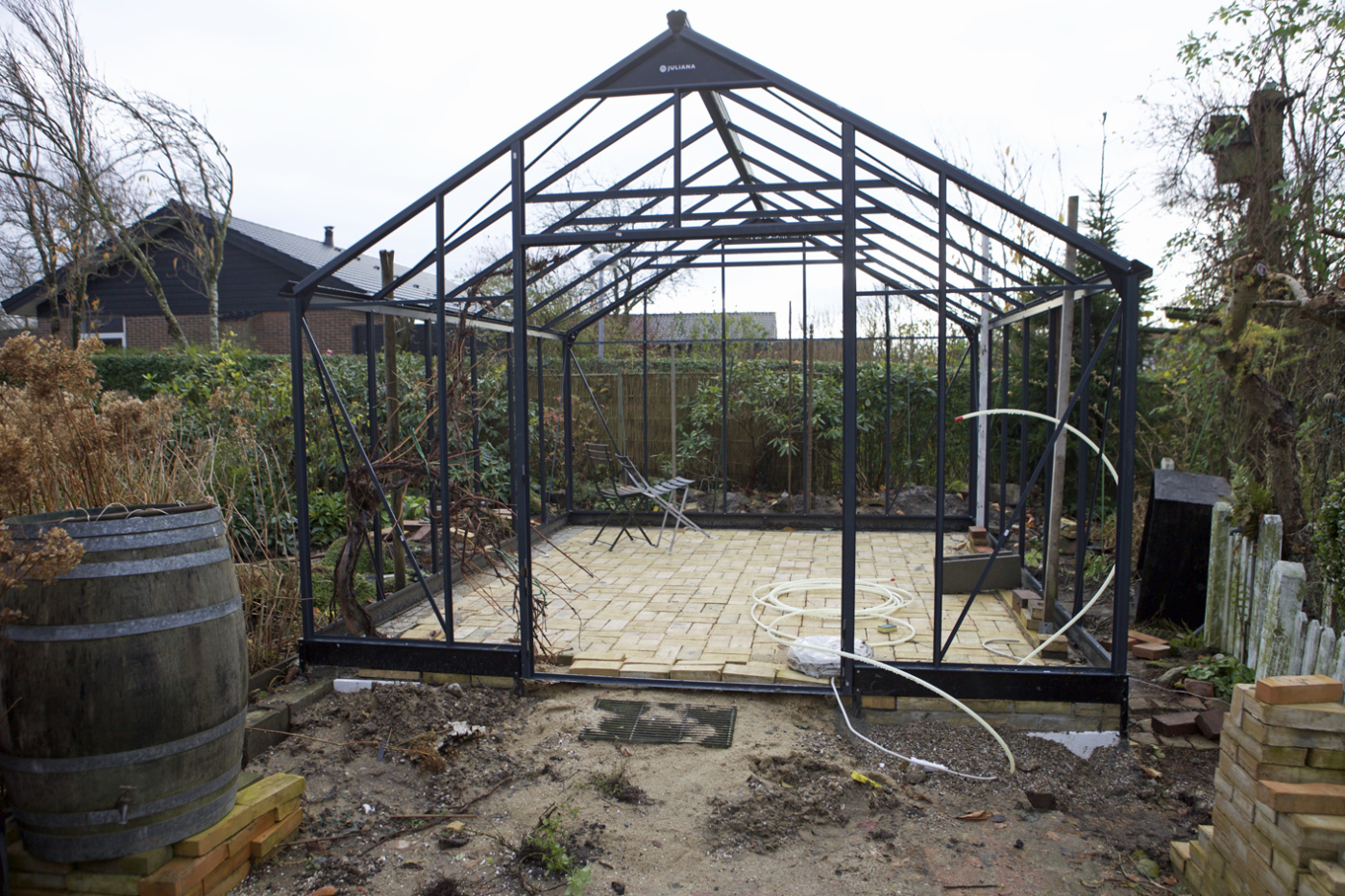 This is where we are now The house is largely assembled. I put up, as described, some supports to support the sides if we were to experience a gust of wind again. Should that happen, then the supports would hold the sides in place. Later after the house was assembled came a strong gale. The supports were turned over, but the house did not move an inch. We look forward to having time for the rest: Glass, installation of the door and windows, a wide staircase up to the greenhouse, where I can put potted plants, and then the decoration of the greenhouse.