You can as a garden owner do a lot to attract animals and insects to the garden. The animals are very useful and create biodiversity, and then they are beautiful to look at.

Text and pictures by Helle Troelsen 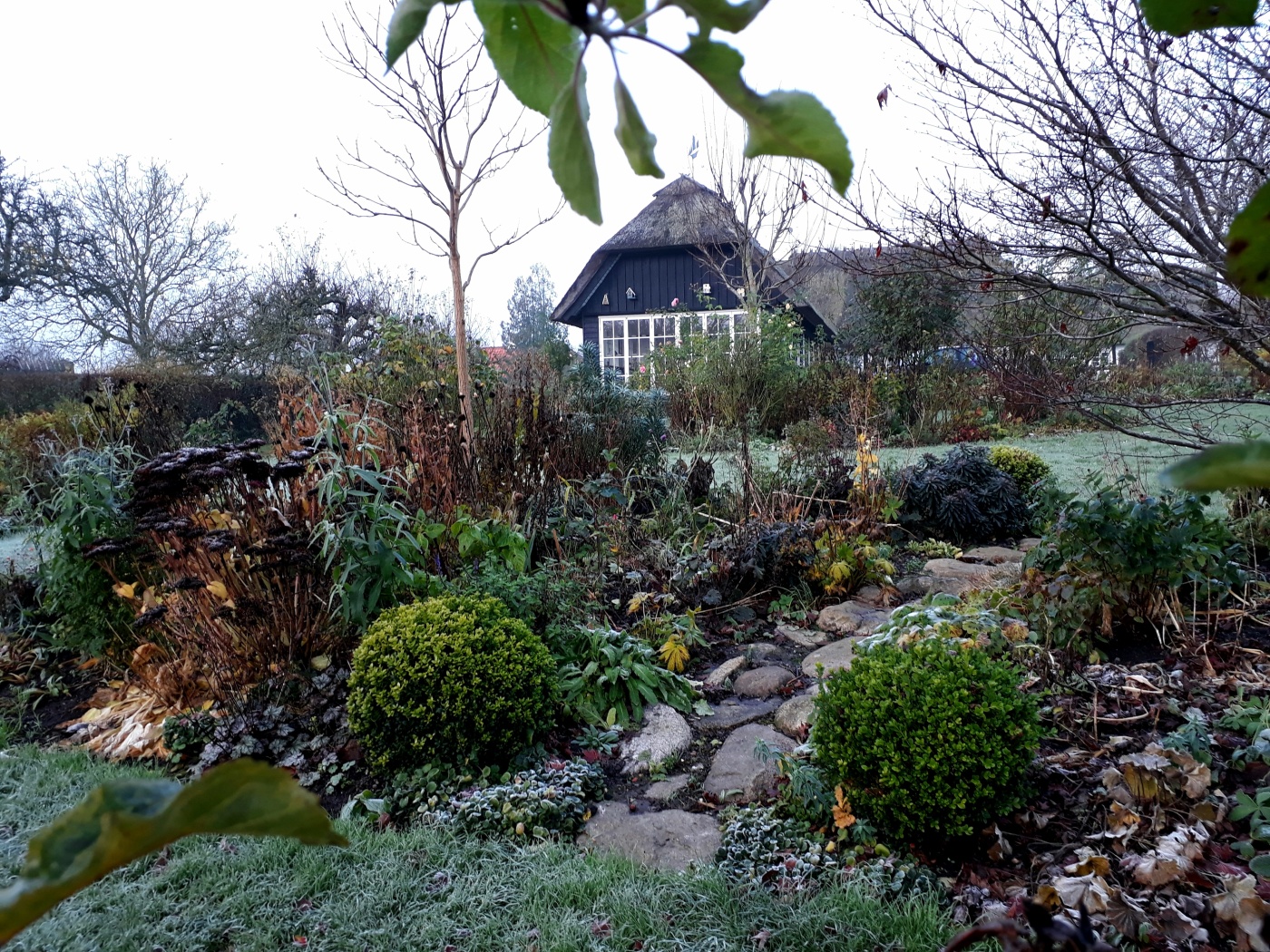 Good habitats for animals and insects are becoming more and more limited, partly due to lack of space, and this is causing a decline in insects, including bees, insects, birds and other animal species.

But garden owners can make a difference by arranging their gardens to advance diverse plant and animal life. This does not mean that the garden should be laid out as wild nature - you can easily have a beautiful and well-kept garden, and at the same time think of good habitats for animals and insects as an exciting design in the garden. Based on my garden, I will give you a couple of ideas on how you can make the garden buzz. 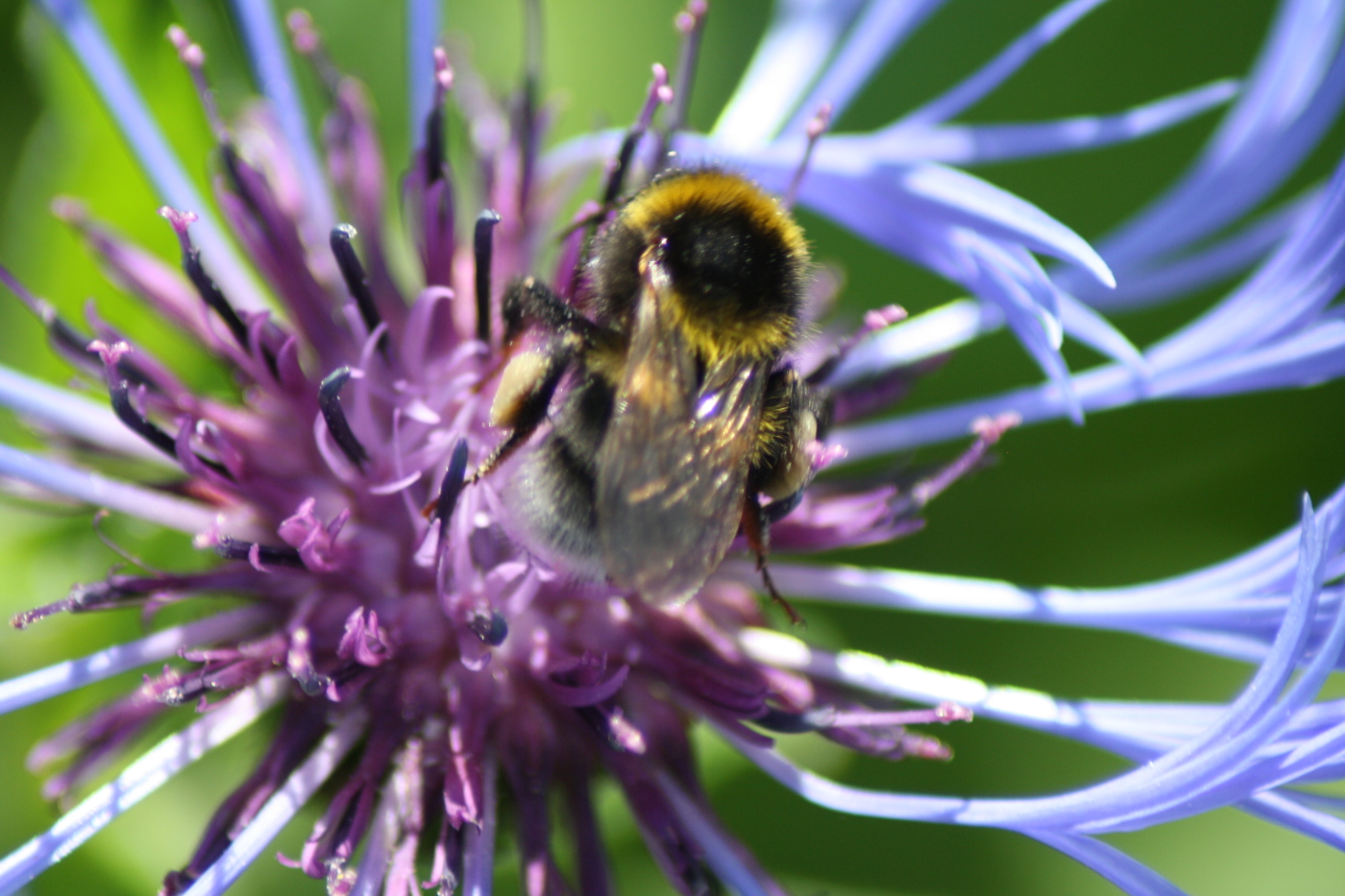 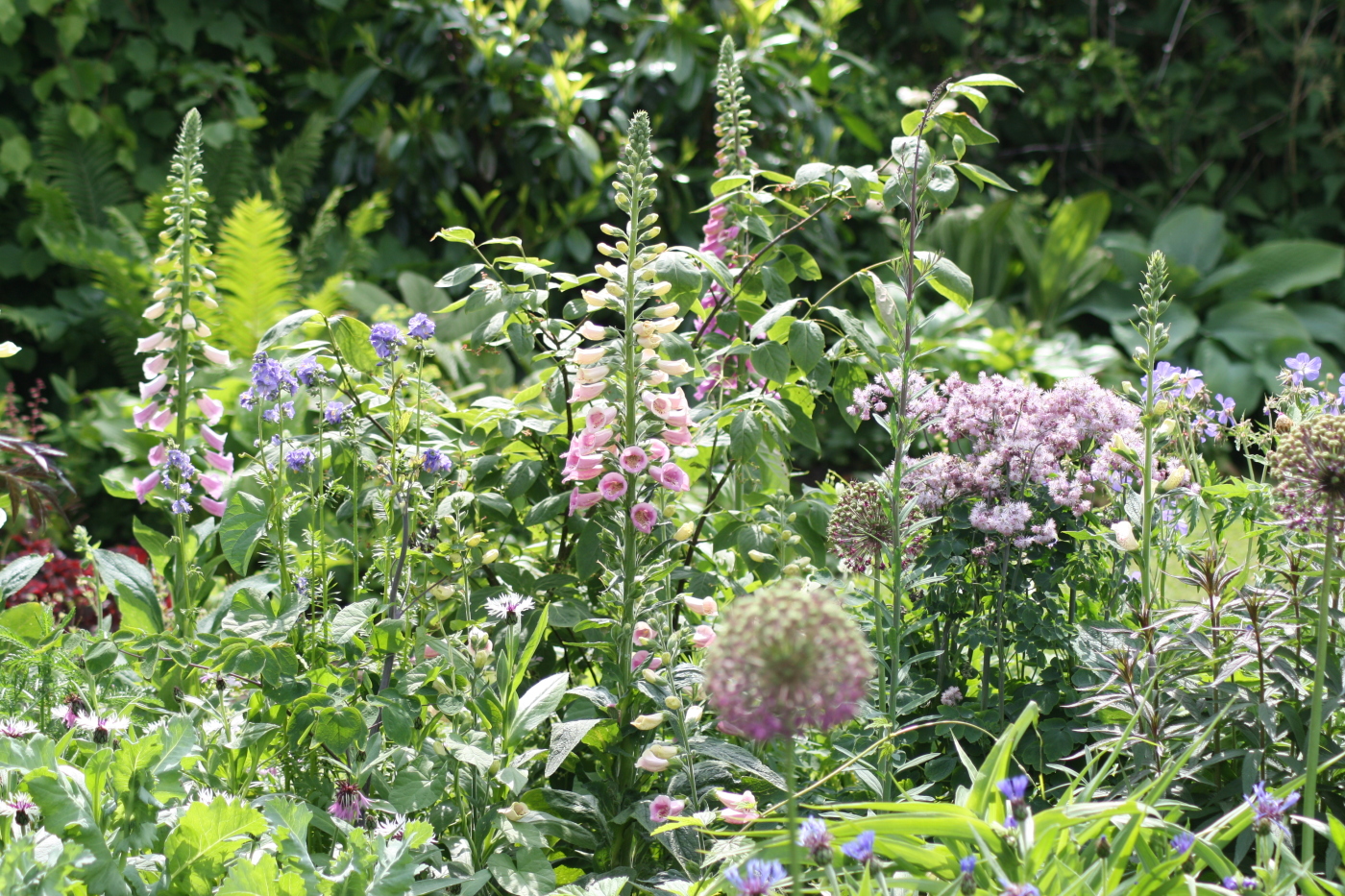 There should be a mix of plants that contain a lot of nectar and pollen that attracts insects. Rather a lot of different kinds, than a few of the same kind. In that way, there will be treats for more insects, as some prefer some plants over others. 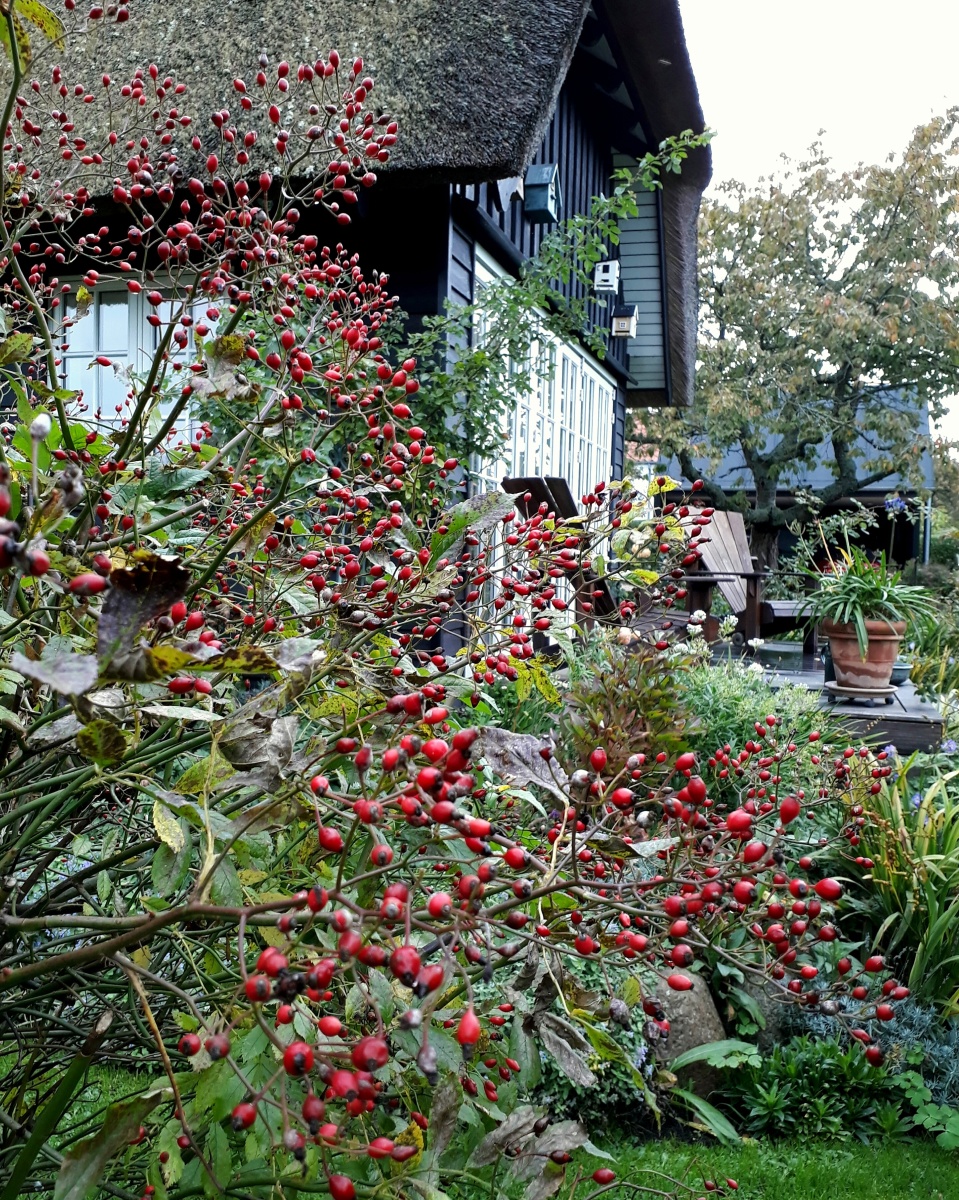 Plant shrubs and trees that bear berries and fruit, and preferably some that bear fruit well into the winter. Then there is food for the birds, which will make them stay in your garden. For example, I have the crabapple "Malus Baccata" and several single-flowering shrub roses which bear rose hips late in the season. It is e.g. the rose "Rosa multiflora". 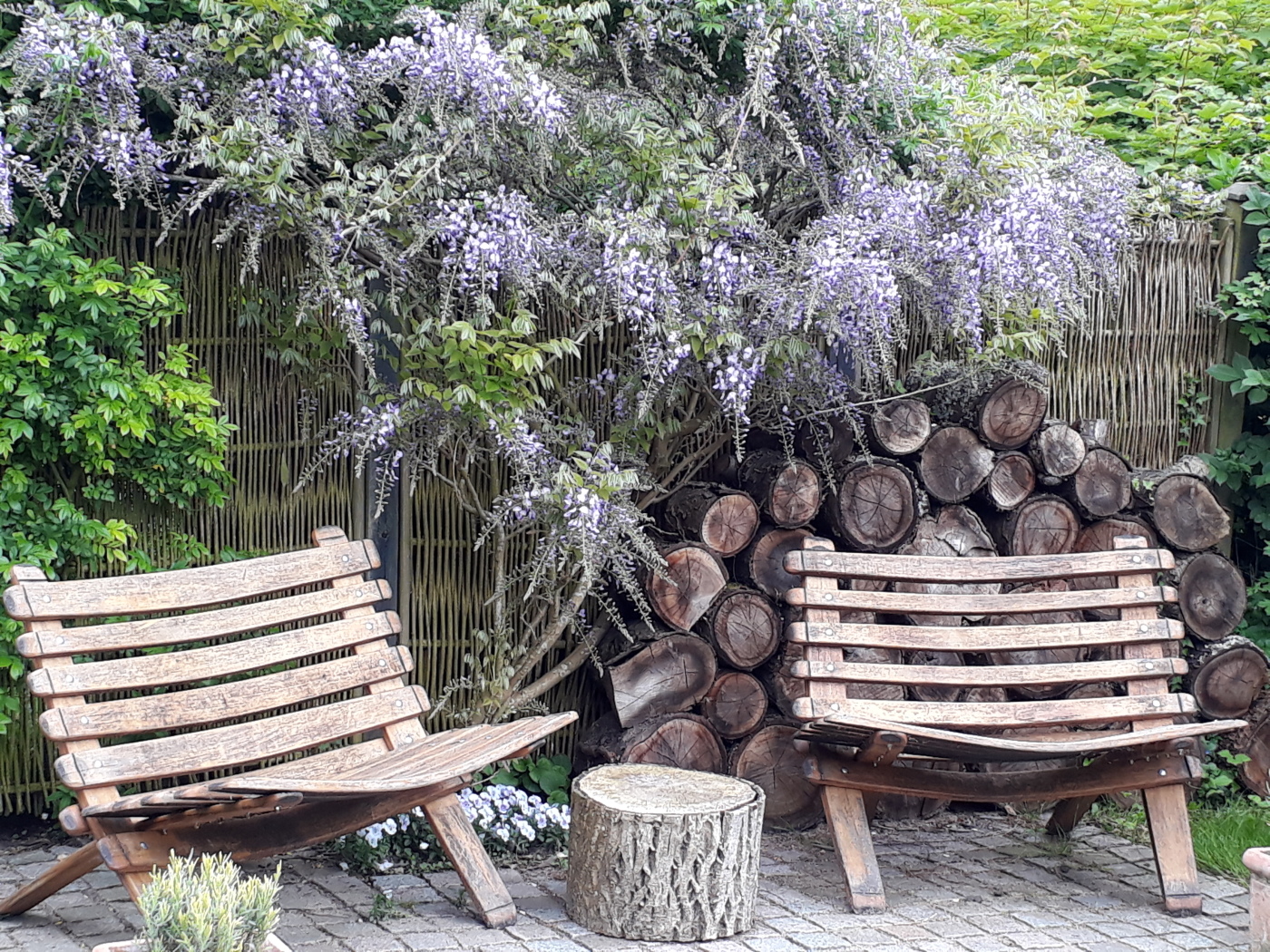 Firewood stacks are sculpturally beautiful and at the same time, they do good. I even have a wren that has built a nest in one of the firewood stacks. 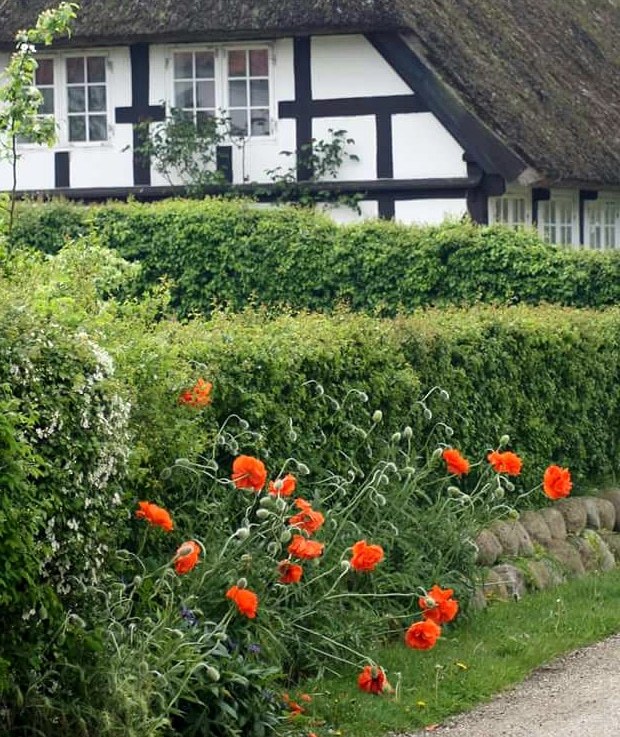 Stone circles have been built by the road and between garden spaces. When they have a height of at least 40 cm, they can form home for many reptiles - reptiles that hide and breed inside between the stones. 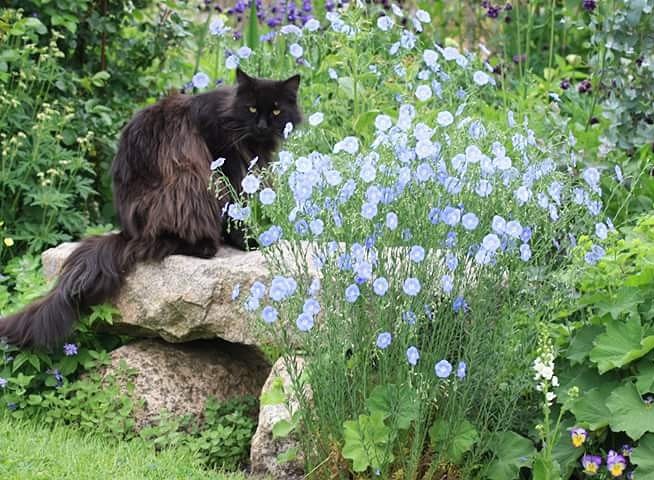 It can also be the use of natural stones as paths through beds or laid on top of each other so that they form a bench, as here where it is placed in a bed instead of a fabricated wooden bench. It is surrounded by low and tall insect-friendly plants. Here, food and hiding places are close to each other. The stone is warm, and butterflies like to take a break here - and also the cat Sofus. 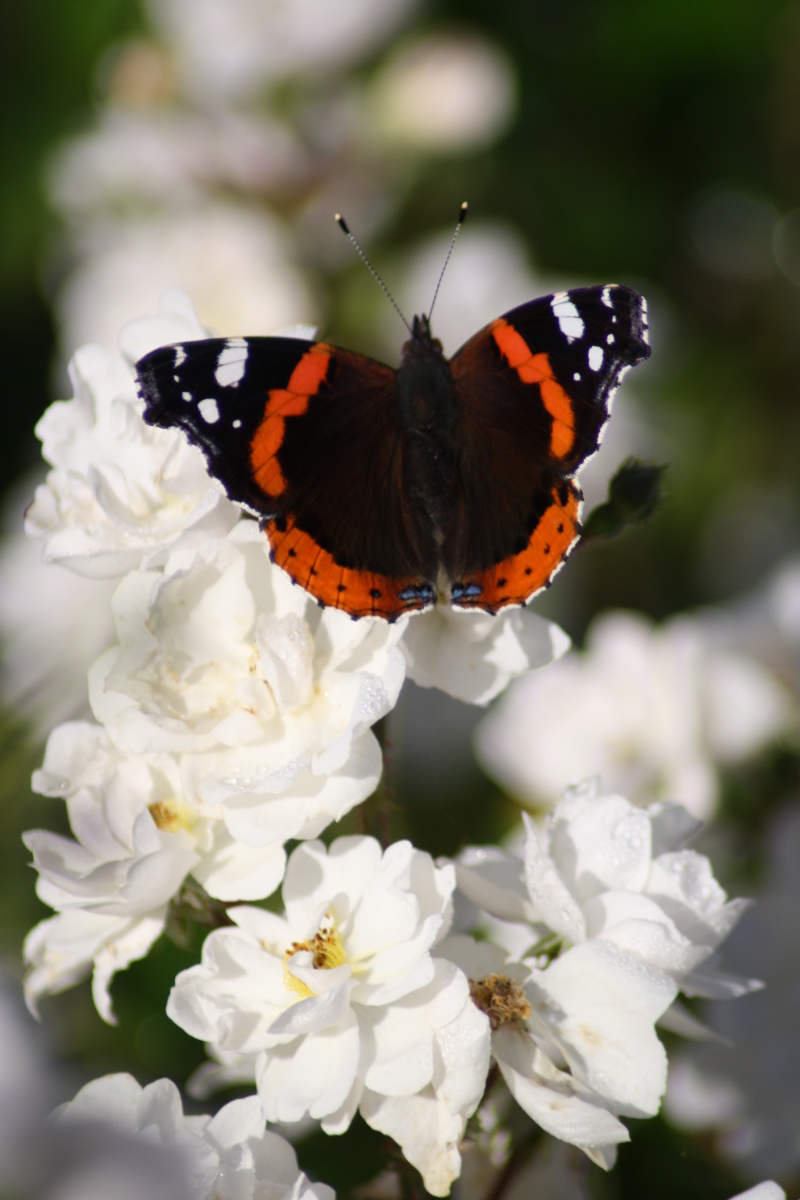 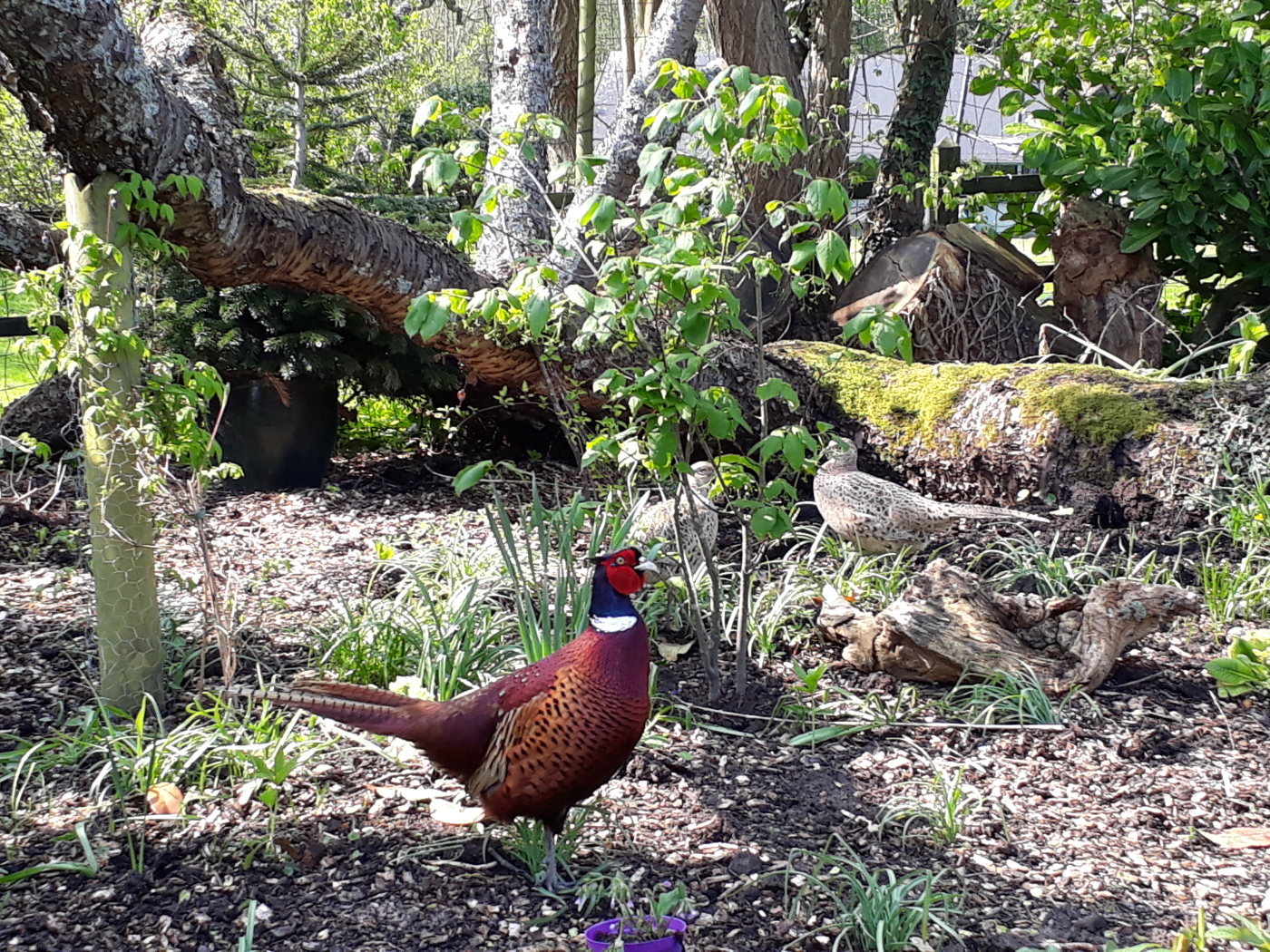 In the shady corner of the garden, where the forest bed is laid out around a large old, downed tree trunk, there is much life of birds, animals and insects. Here lives the pheasant Henry with his six wives. 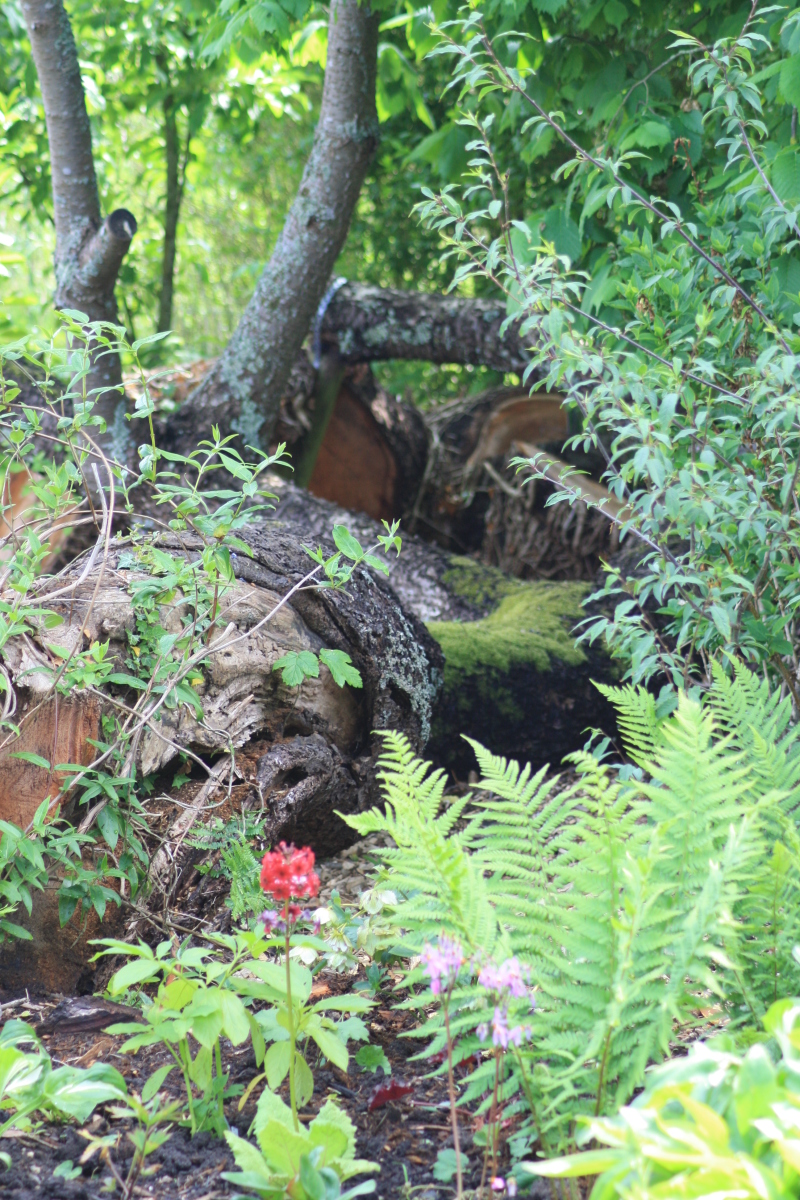 Here in the shade are scrub with ferns, climbing plants, among other things goat-leaf honeysuckle which attracts the night insects, such as the long-beaked night butterflies (moths). Here is evergreen ivy which is a hiding for small birds and there is food in both flowers and seeding.

Here it tingles and crawls in the interior of the tree trunk which slowly decomposes. Toads and salamanders live here because it is humid. Here in the forest bed, logs and branches are thrown, which are partly covered by hostas and other leafy plants that form moisture, shelter and hiding places for birds, animals and insects. It is beautiful, there is life and a smell of the forest. 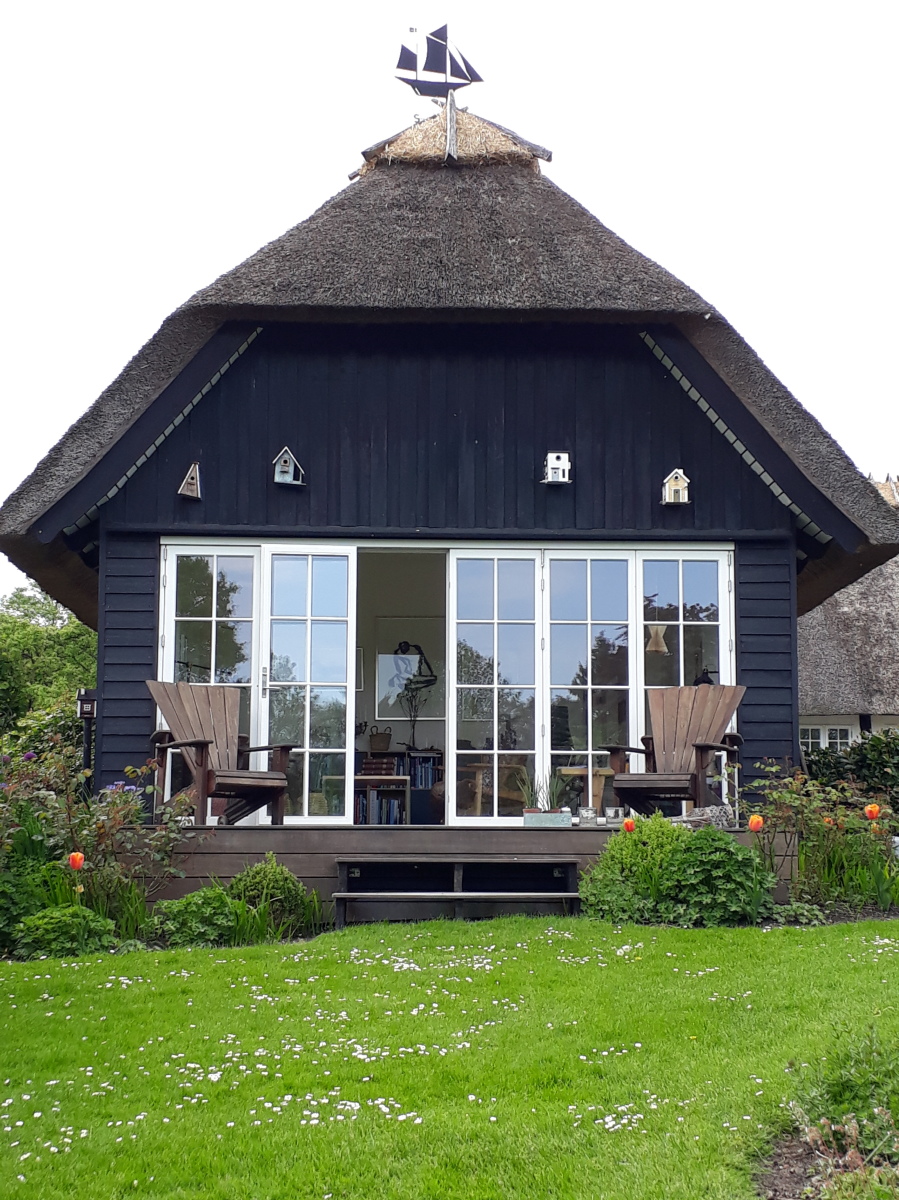 Nesting boxes have been set up everywhere in the garden. There are the magnificent boxes on the gable of the house for "important" birds and the humbler boxes on fences and in trees for other birds. 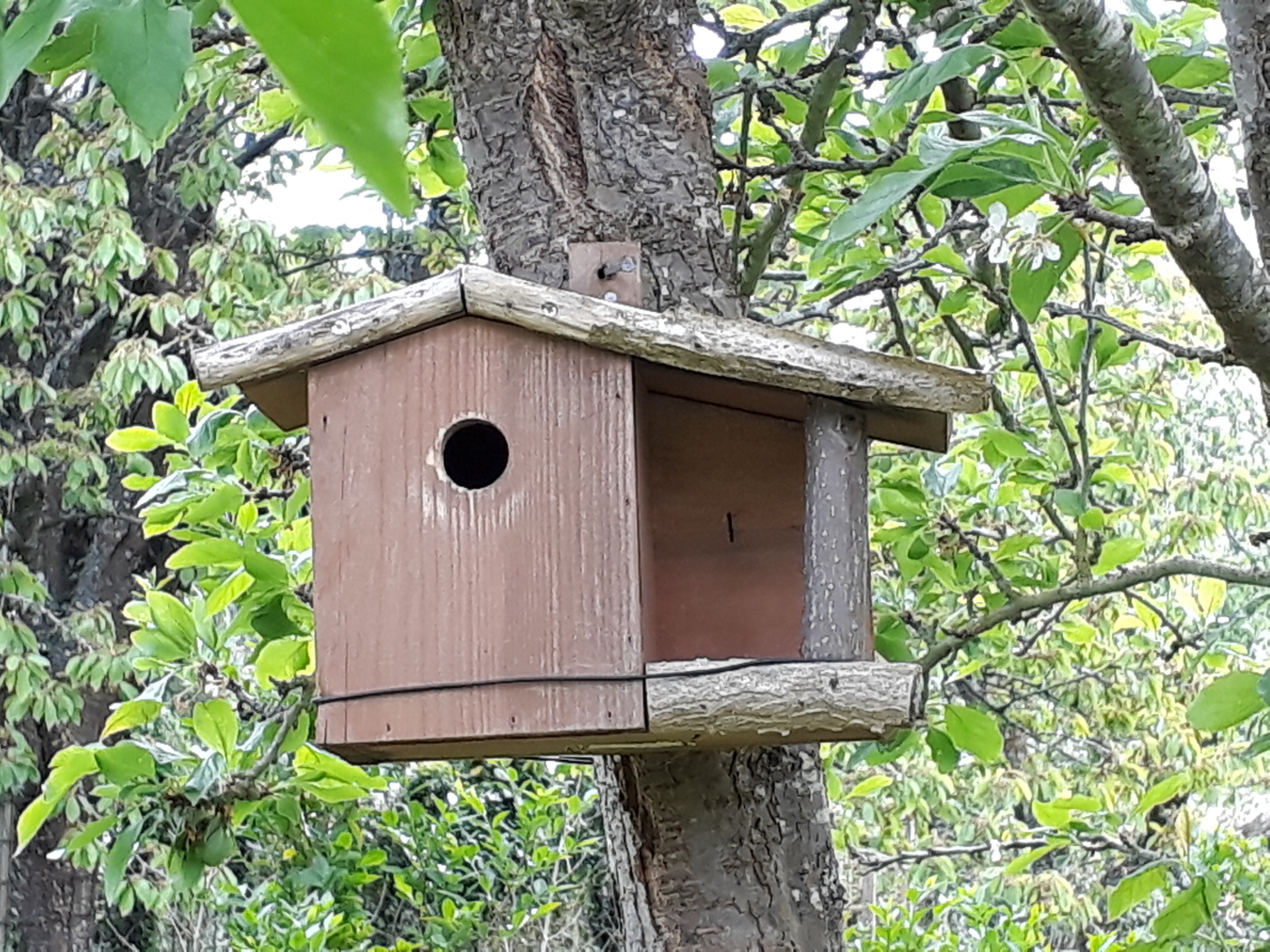 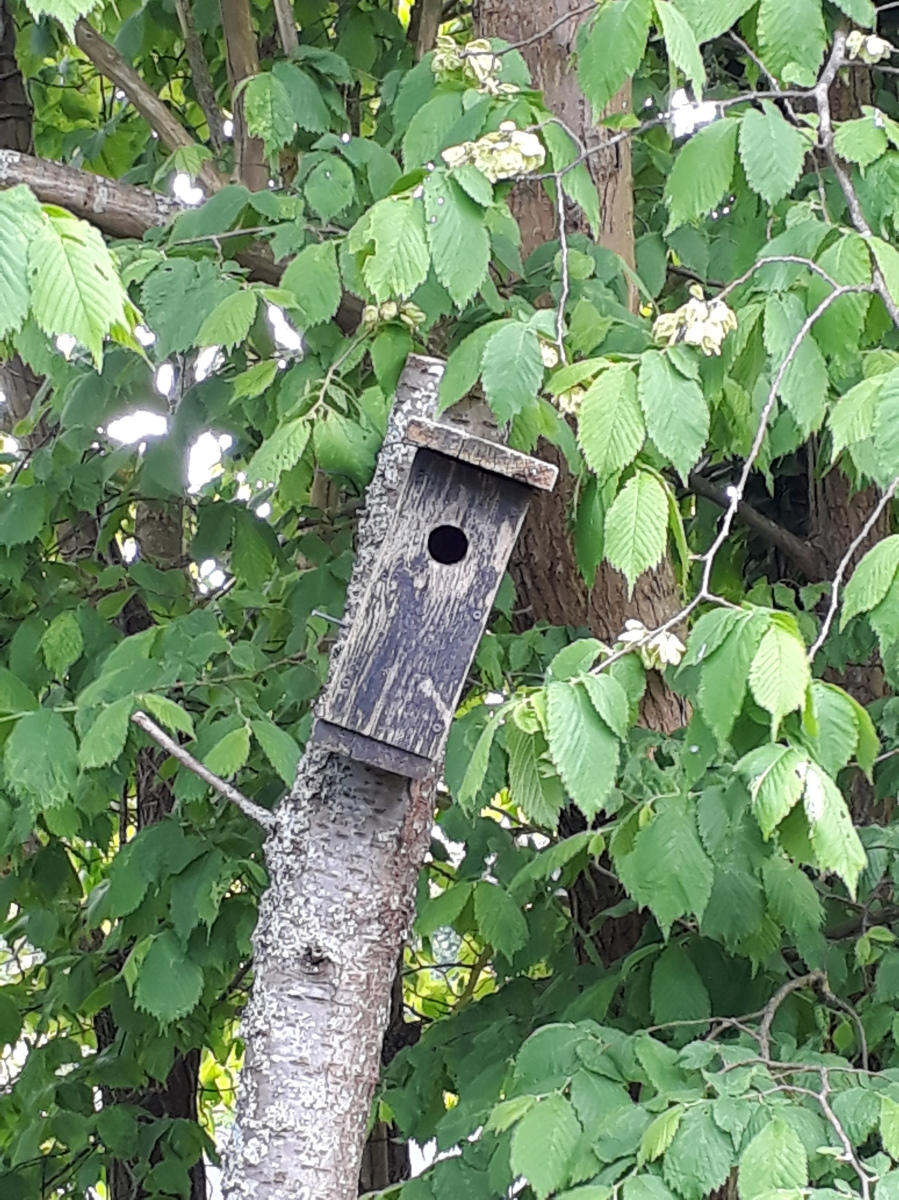 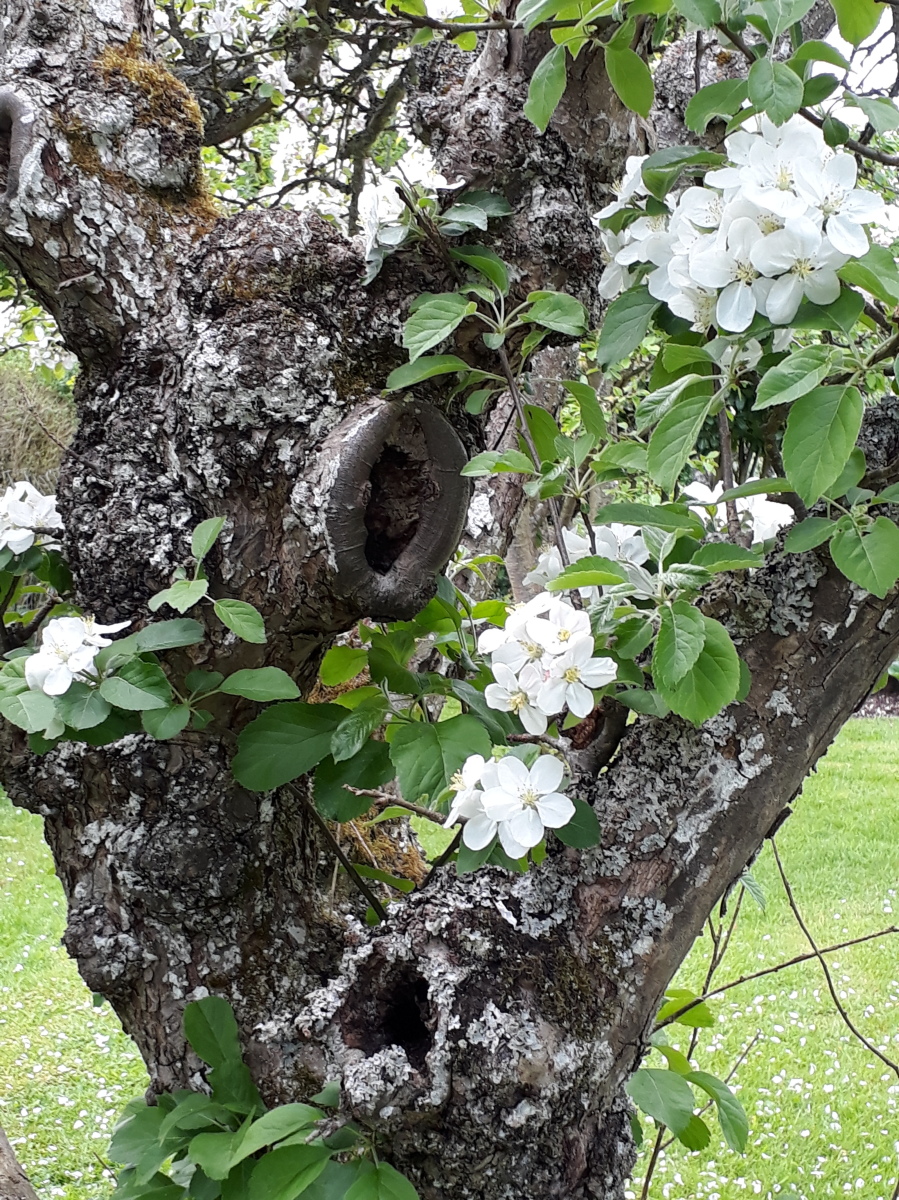 In an old garden, there is nothing more beautiful than crooked old trees. As long as they live, they should be allowed to stand there even if the apples are sour or the tree does not bear as much fruit anymore. Here are cracks and cavities, where nests can be built and where spiders and other insects can move in, which the endangered wren likes so much. It is a pleasure to see the wren slip in and out of the holes in the tree. 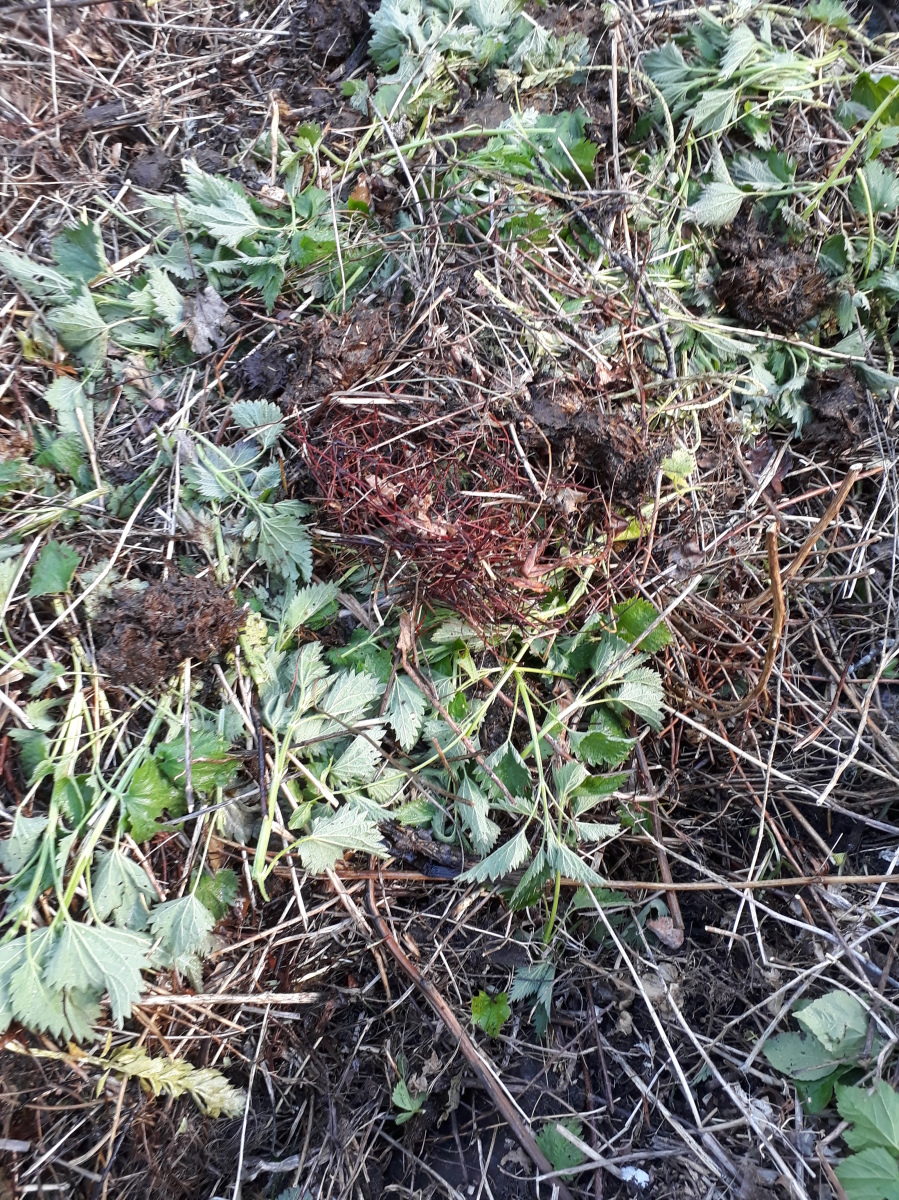 If you have space and can tolerate the disorder, reserve a corner of the garden for an open compost heap, a leftover pile of stones, piles of slash or other clutter. Here you can let stinging nettles grow, as it is a fantastic insect-plant. There must be calm so the animals can settle down without being disturbed by us humans or noisy lawnmowers. 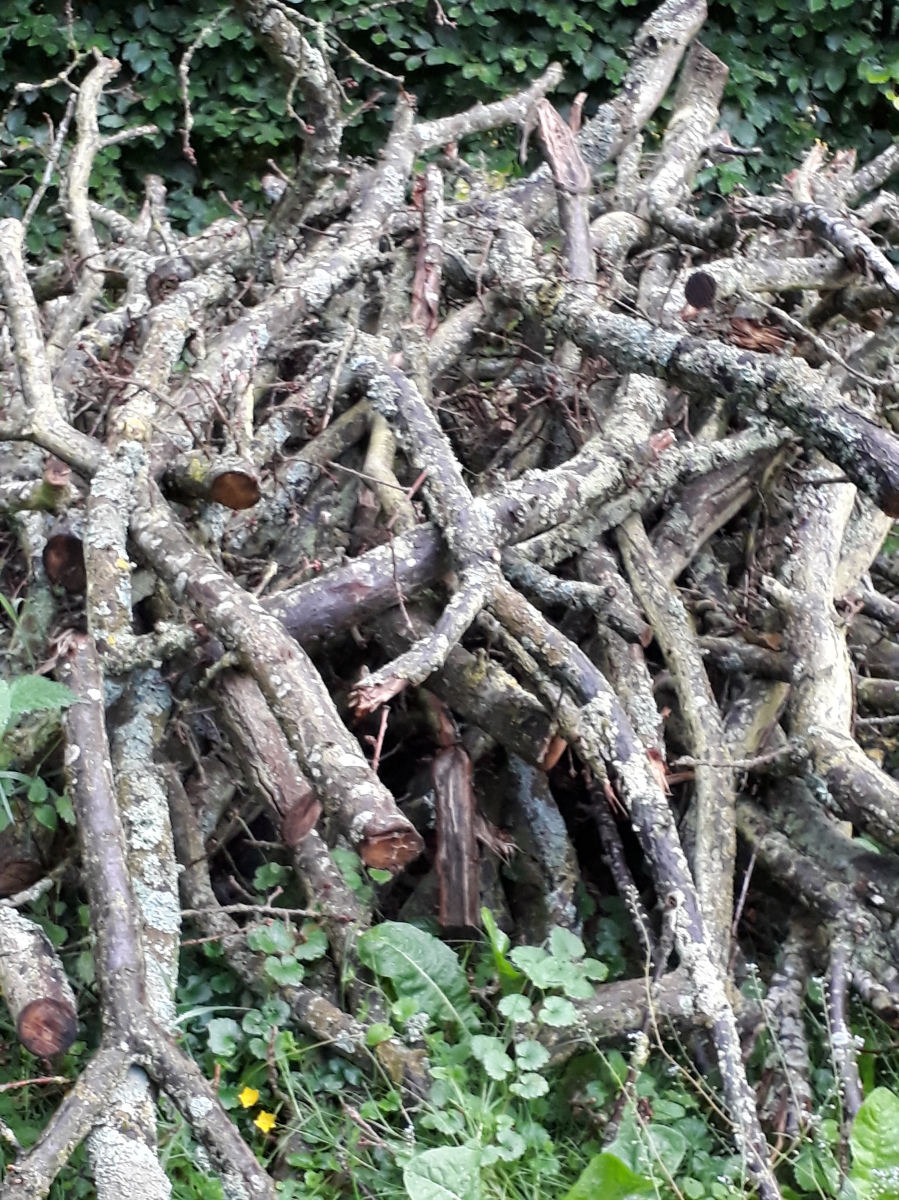 When it is winter, there is a real need for the animals to be sheltered. In the beds, I leave perennial shoots, as the insects live there, and the birds eat the seeds through the winter.

A good layer of crop cover of withered leaves on all the beds in the ornamental garden and the kitchen garden keeps the ground warm and it is fantastic food for the worms, woodlice, centipedes and other bugs under the ground. It is both decorative with the beautiful perennial shoots and seedlings, and then it is life-giving with food and housing for many animals in the garden throughout the winter. So do not clean up and leave the ground bare. 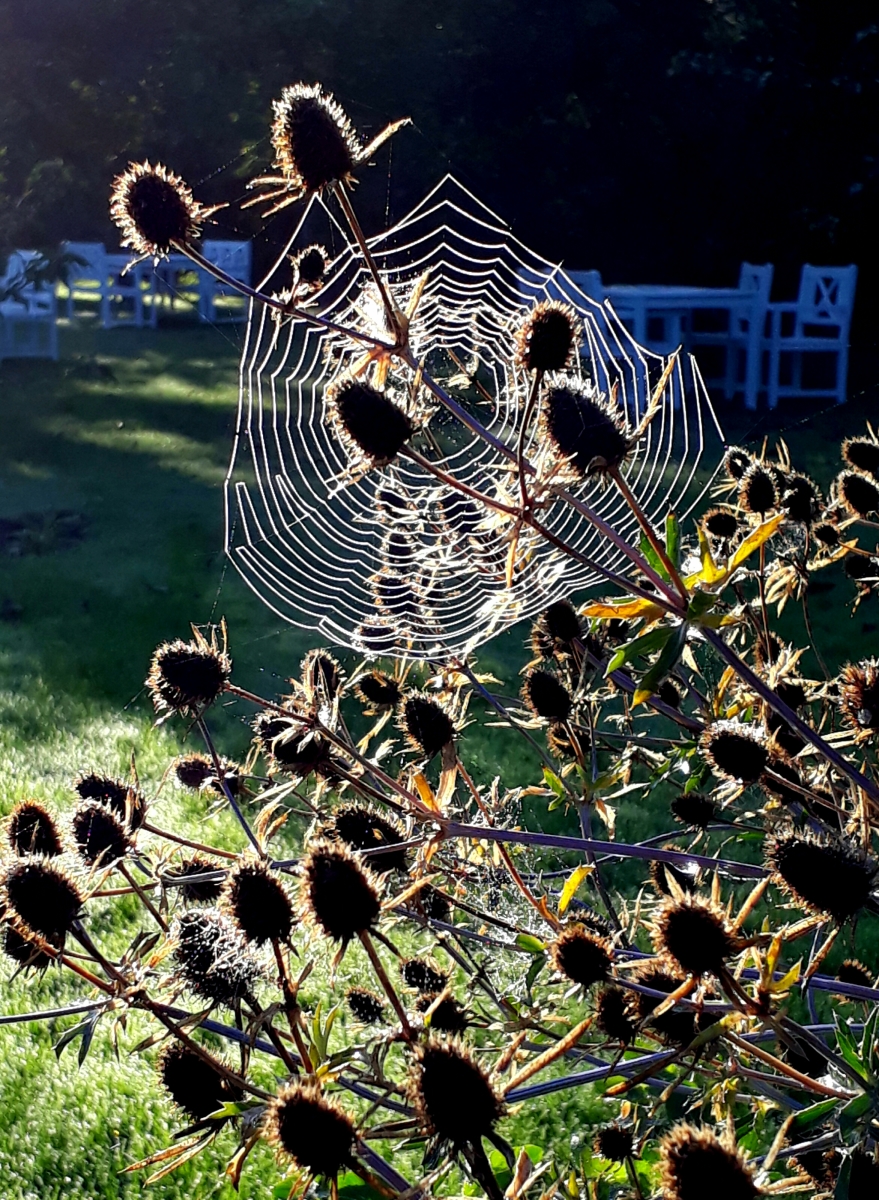 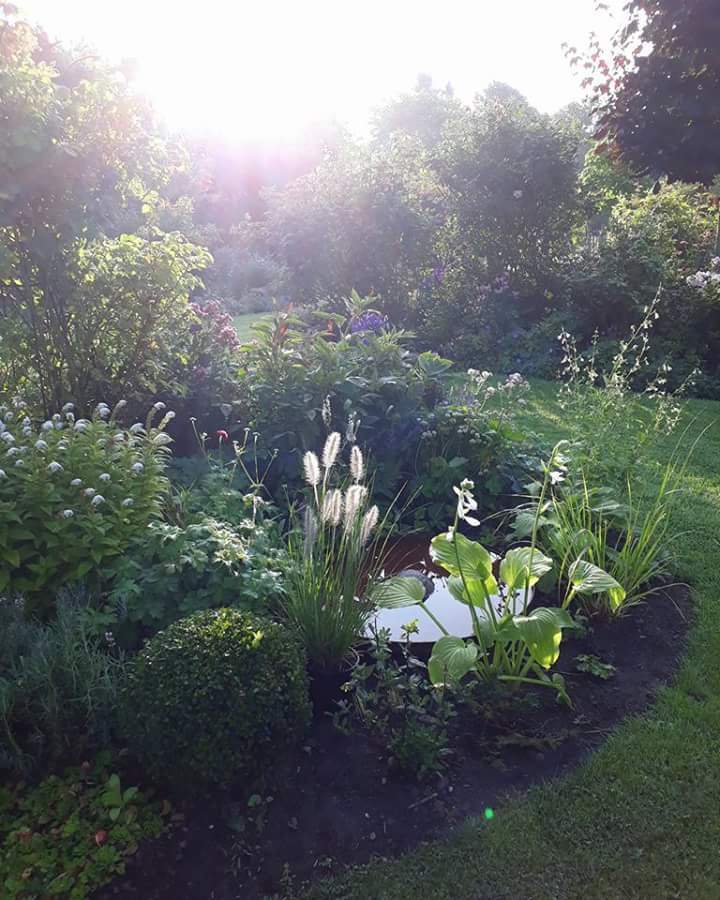 Animals and insects depend on access to water. I have placed a water tub in the middle of the bed between the plants, with a stone in the middle. Here insects and birds can sit down to drink. The pheasants, chickens, the sparrows that live on the gable of the house, dragonflies, butterflies and other insects go there to drink. The blackbird and the small birds bathe there, and the cat Sofus only drinks water there, because it obviously tastes best, a bit of a bird - maybe. 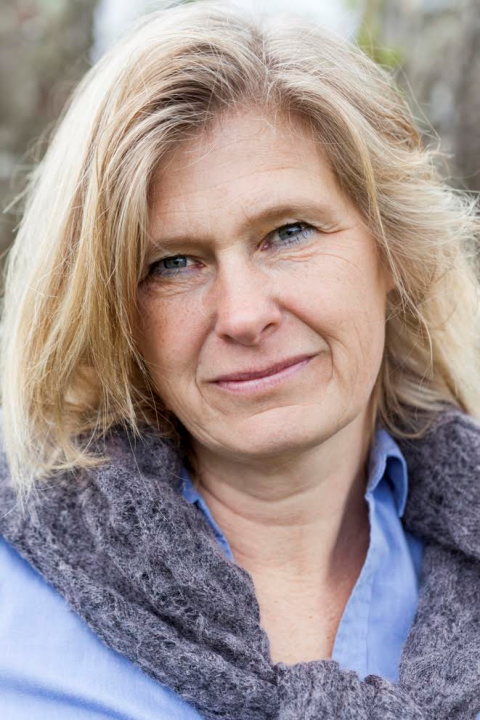 Helle Troelsen is a Danish garden enthusiast. For Helle, a garden is a place where you can stimulate all your senses and discover that there is more than obligations, boring routines and stress in a hectic everyday life. A garden is a time pocket with its own time, rhythm and cycle that you can only sense and enjoy.