Louise Kamman Riising, who is the interior designer of HEYHOME, has started her first season in her new greenhouse. Louise has shared her best and worst experiences from her time as a new greenhouse owner.

“Our aim with the greenhouse is for it to be a sanctuary in the garden. A place where we can withdraw from reality – either individually or together. We have had some lovely evenings in the greenhouse, having a nice time with friends and food.” says Louise Kamman Riising.

She lives north of Copenhagen with her husband and kids in a house with a smaller garden. The greenhouse is a Botanica of 140 square feet, and besides being the sanctuary of the garden it is meant for growing different kinds of plants. Also, Louise had an idea of having quails in the greenhouse, but after having the quails for a while she has changed her strategy. 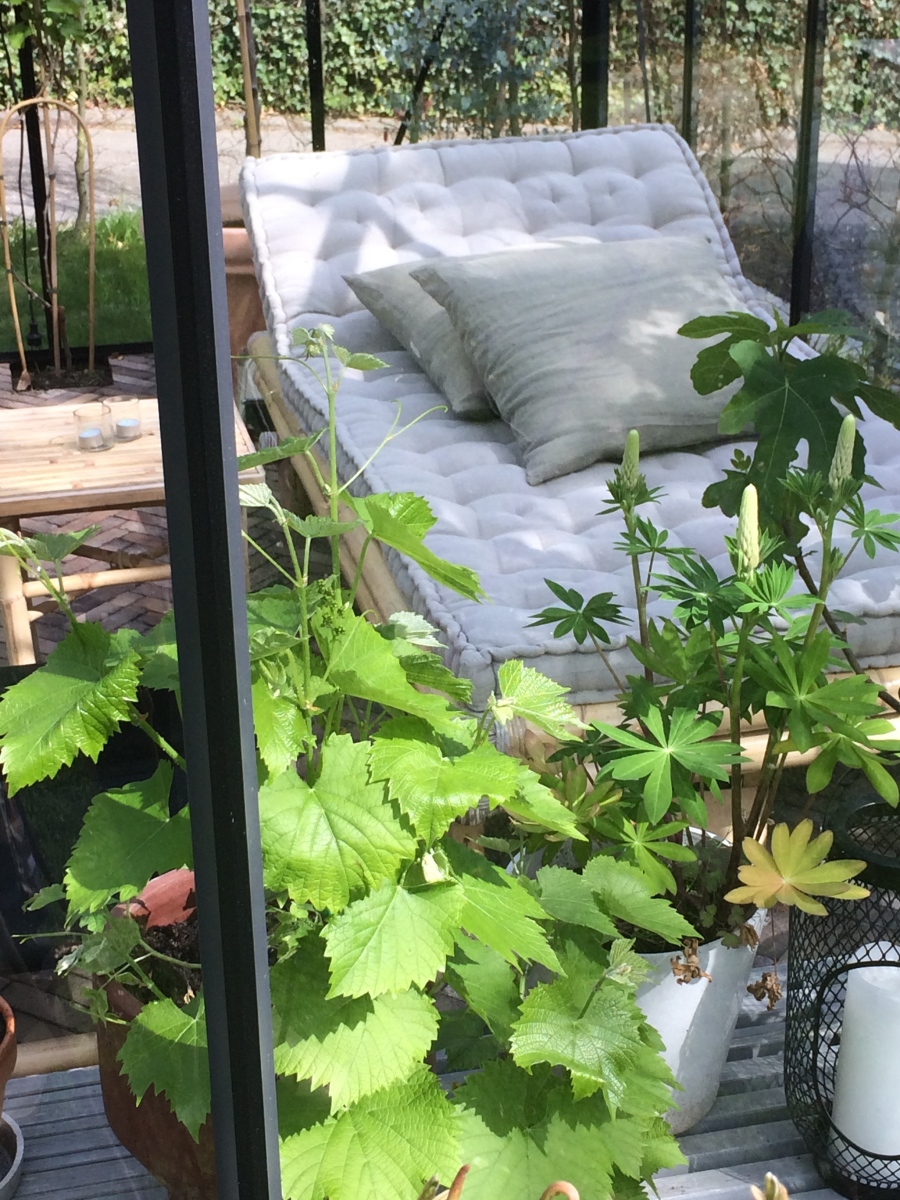 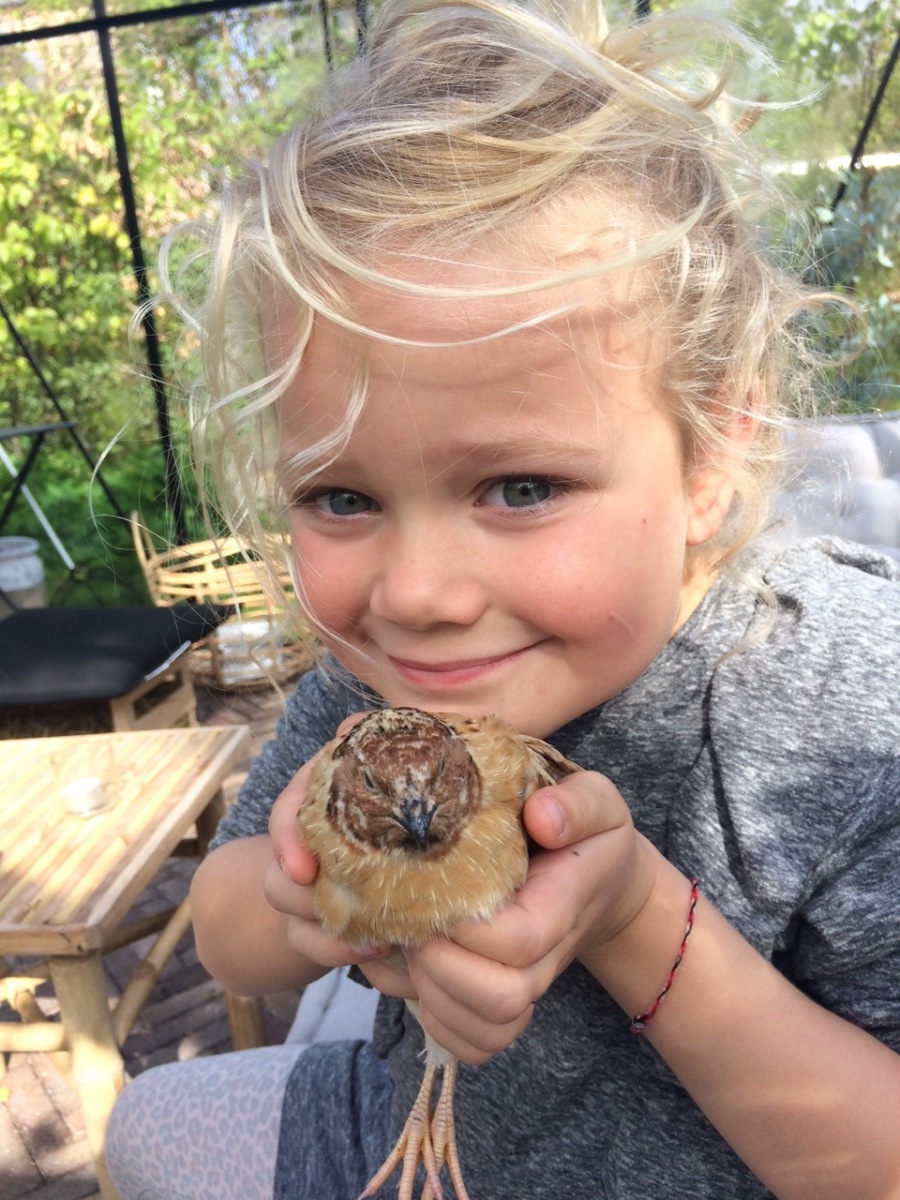 They came, they shit (all over) and now they are in a cage outside the greenhouse

It started with the kids wanting a pet, so it was obvious to combine that with an animal that could benefit in the greenhouse, which quails can. The small birds are known for being used by many greenhouse owners as a useful animal, that eats ants and other things that sneak into the greenhouse.

Louise bought six quails – three Japanese and three Chinese. She put up a box for them in the corner and spread some hay for them. Everything was perfect until they started shitting all over.

“There was bird shit everywhere which didn’t fit well with the greenhouse being a sanctuary to stay in. They messed up our beautiful newly laid stone floor in herringbone pattern.”

Louise’s conclusion: “Quails are in many ways a good idea. They lay small eggs from where we make small fried eggs. They are nice useful animals, but for us it was too much of a mess in the greenhouse, so they are now in a cage in the garden.” 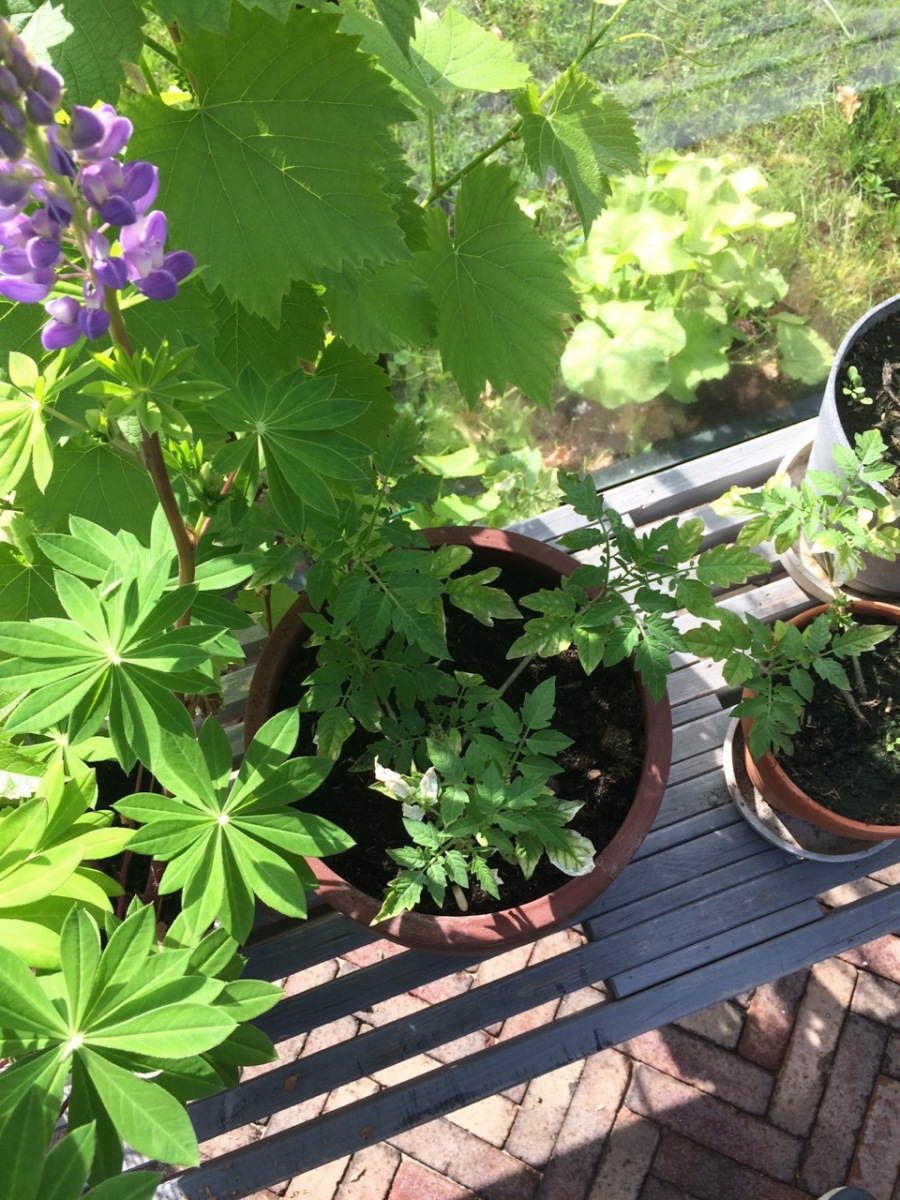 Be patient when transplanting

The family have grown cucumbers and tomatoes. Mid-April Louise thought it was a good time to transplant the cucumbers. They were put in bigger pots inside the greenhouse, but the night frost was not all gone, so only withered cucumbers are left now.

On the other hand, the tomatoes are doing fine. Louise chose pear tomatoes and regular tomatoes.

Louise’s conclusion: “Be patient when transplanting. Just because it’s spring it doesn’t mean the temperature allows seedlings to grow. Also, think about what you transplant in. Pots are fine if you want to irrigate yourself all the time. My experience is that you need to irrigate a lot, so I’m looking for capillary boxes that self-irrigate. Finally, you need lots of space as plants take up more room the bigger they get.” 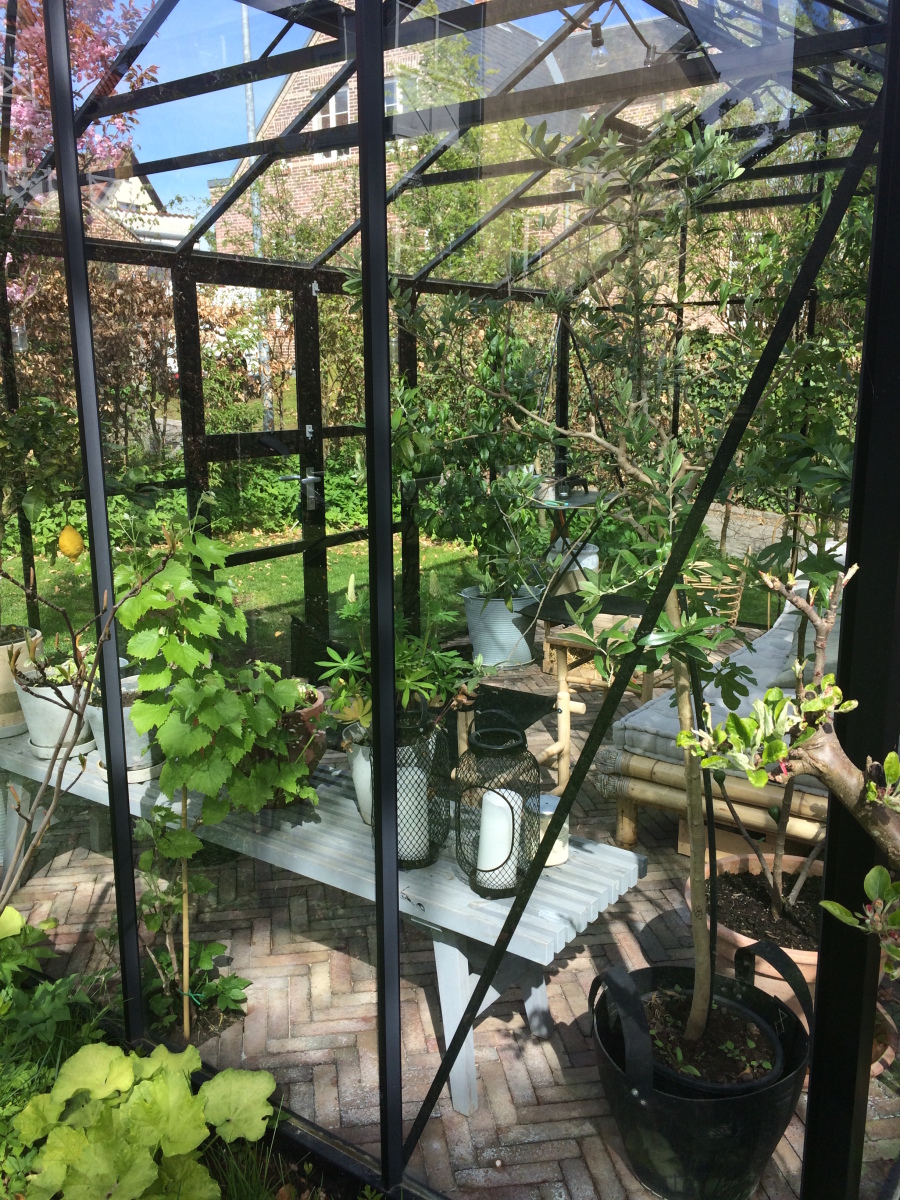 Vine for shadow and the sweet tooth

Louise has planted two vines in the greenhouse – one in each end. The goal is for the vines to fill out the entire ceiling. They have been planted directly in the ground, and it looks like they are growing well.

Louise’s conclusion: “For now the vine in the greenhouse looks promising. I have chosen a seedless and sweet sort, which we can eat and then the vine will provide shadow for the other plants in the greenhouse. 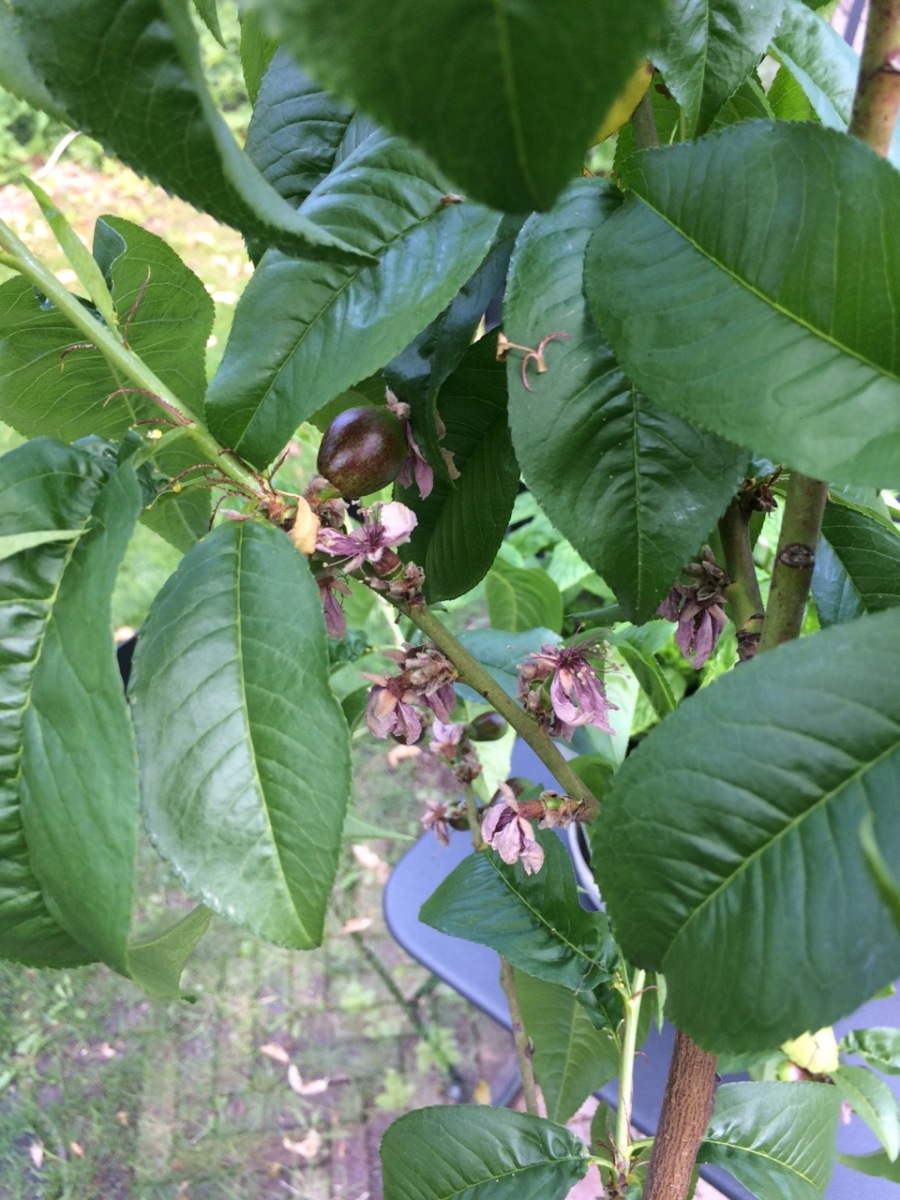 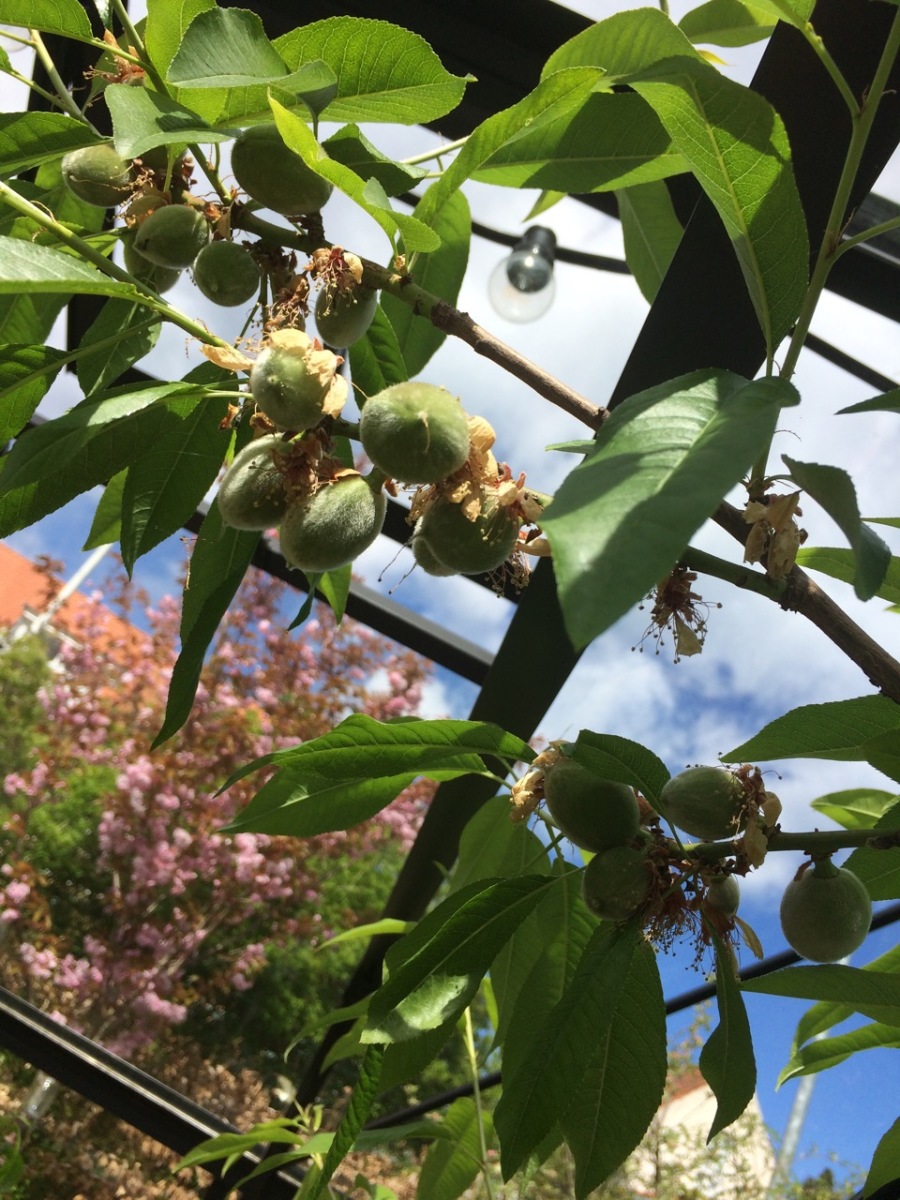 The greenhouse also houses an almond tree, a nectarine tree, an olive tree and a lemon tree. They have all overwintered in the greenhouse. All trees have made it through the winter except the lemon tree which died. Louise has bought a new lemon tree.

Louise’s conclusion: I have probably forgotten to irrigate the trees during winter. It is easy to forget when it’s cold outside, but they do need water. 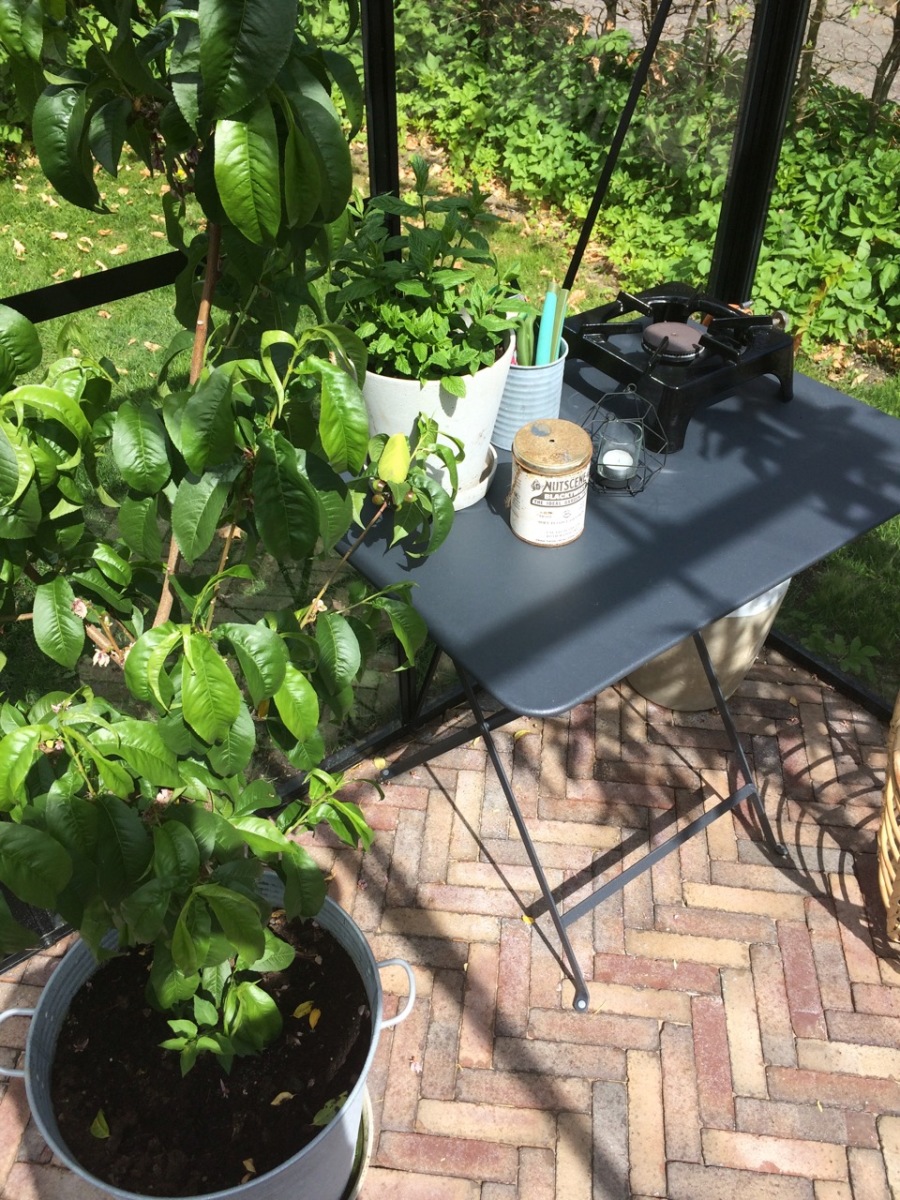 A gas burner and power make it nice and also pancakes

The family have power in their greenhouse to make it nice with small lamps when the sun goes down. They have also put in a gas burner to create their own little outdoor kitchen.

Louise’s conclusion: “We are happy to have those two things in our greenhouse. The other day my husband made pancakes from the gas burner. We have held birthday parties in the greenhouse where we have made waffles for all the kids. It worked fine even though it was freezing outside.”

Louise is trained as a photographer and has worked at Danmarks Radio.

In 2008 she founded her designer company HEYHOME

HEYHOME specialises in styling homes and interior designing for companies and privates.