Bent Løschenkohl is quite the innovator when it comes to clever solutions in the greenhouse, that secures early potatoes and irrigation controlled by a computer. 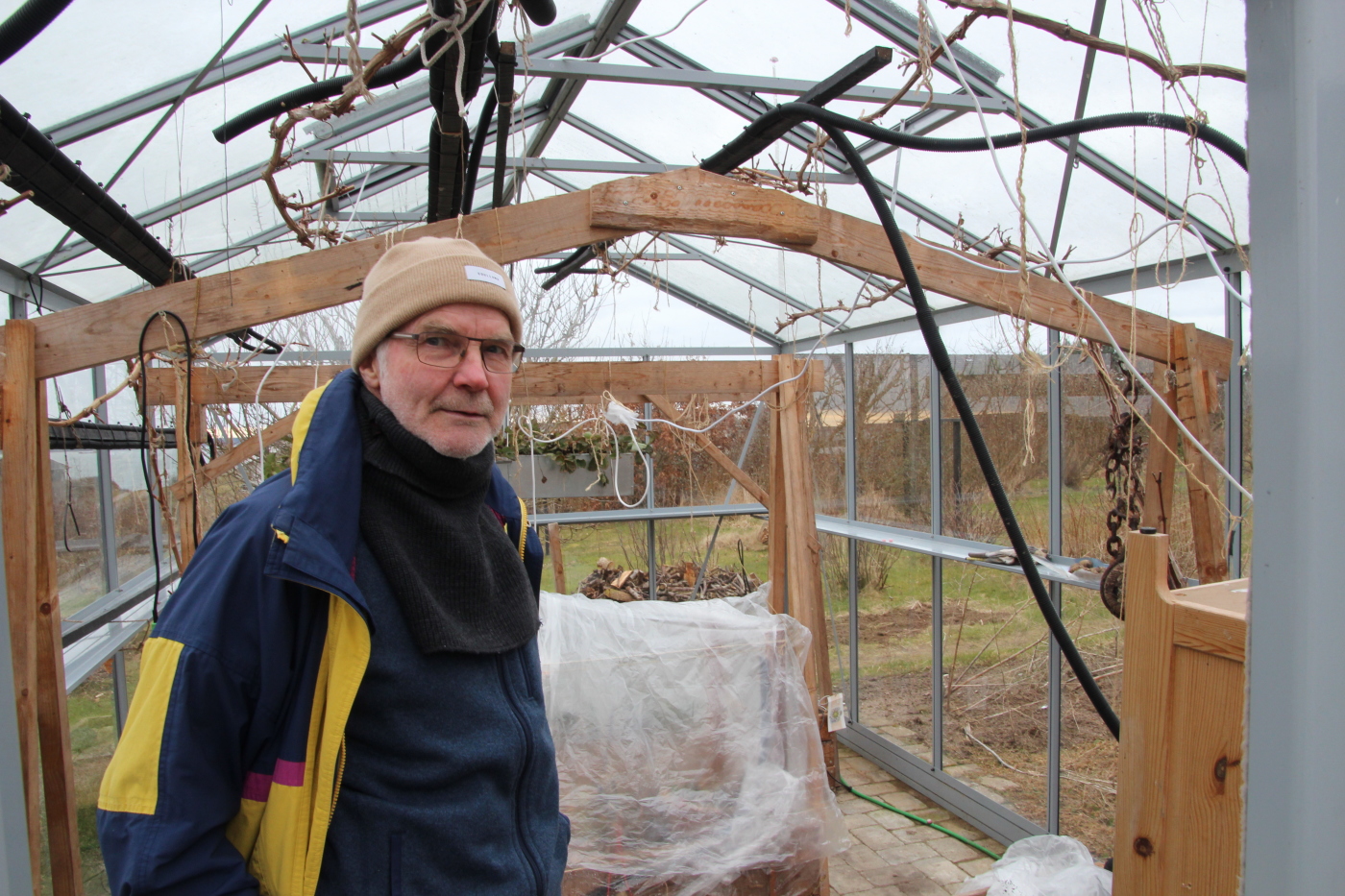 Bent Løschenkohls has a greenhouse with a sea view in Denmark. The house is fastened, and the glass is secured with silicone, as it is placed in one of the windiest spots in Denmark.

The Greenhouse Forum visited Bent on a cold day in March, and the first look inside the greenhouse would leave you the impression of a greenhouse in dormant. But then Bent starts to narrate, and suddenly the greenhouse appears as a cave of clever technical actions which makes the greenhouse a high-tech universe, where irrigation and temperatures are controlled by a computer.

“Today is not very warm, so my blower is not running, but if I cover these two sensors things will happen,” says Bent.

After just a few seconds a small blower starts running and Bent happily removes his hands from the sensors. The air is led through some black tubes, that are hanging from the ceiling of the greenhouse, from where they are going into a box and release heat for the crops, which in this case are potatoes and cabbage.

“Plants are like humans if we have hot feet/roots we can tolerate being in a cold room.”

Bent is a retired gardener and somewhat of an innovator. Besides blowing warm air around in the greenhouse, he has made sure that he can irrigate the greenhouse from his computer.

“I have put a sensor on the irrigation system, so it is controlled by the temperature in the greenhouse,” says Bent.

Bent collects water from the roof of his house. He stores it in two large black butts, from where it is led through a hose into the greenhouse where splits into smaller hoses in each plant box.

“With this system, I can keep an eye on my greenhouse all the time, even if I’m far away. It gives a sense of freedom.”

Already at the beginning of March, it will be 20 degrees in the greenhouse on a sunny day, though the ground will still be below 5 degrees. Potatoes need a ground temperature of at least 7 degrees, so hot air might be a solution if you want to start earlier. You can do it by leading some of the greenhouse warmth in the soil.

“When I built the greenhouse, I put plastic water tubes in the soil in a 20 inches depth and 16 feet black tubes in the ceiling. At first, there was water in the tubes and a small aquarium pump was controlled by a microprocessor, Arduino. It worked and prolonged the season with 1-2 months in both spring and autumn. Though it was difficult to glue the tubes when there was a leakage, so air bubbles entered. Last year I gave up on the system and tried with air instead.”

Blowing air through the tubes, instead of pumping water through, has the problem that when the air is cooled down the humidity condenses and makes a stopper of water. The problem can be fixed with just a hole in the tube for drainage. On the other hand, it is no problem that the tubes are not leakproof, as small leakages don’t have any significance, also the system can be used during the winter, as air doesn’t freeze. 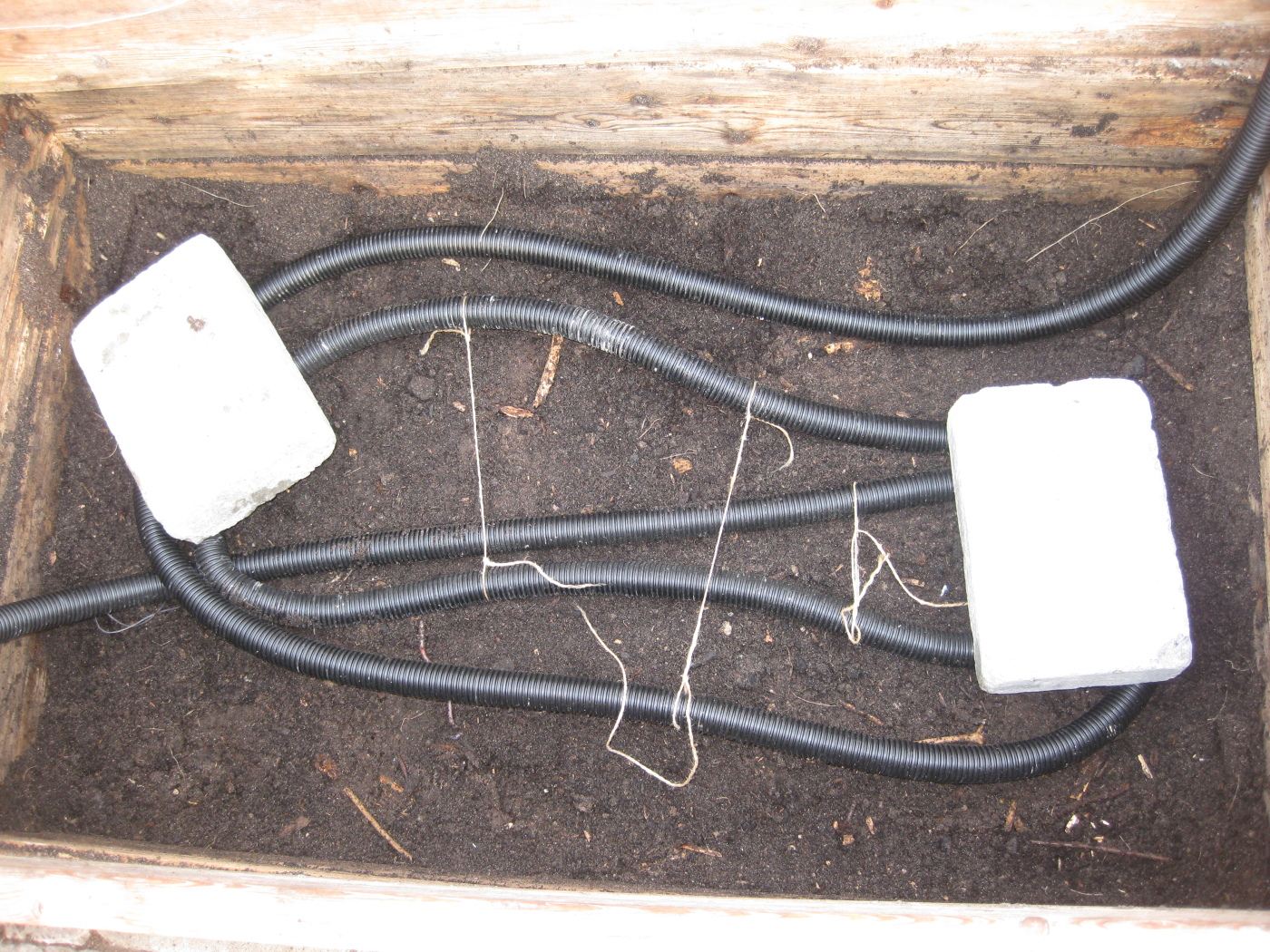 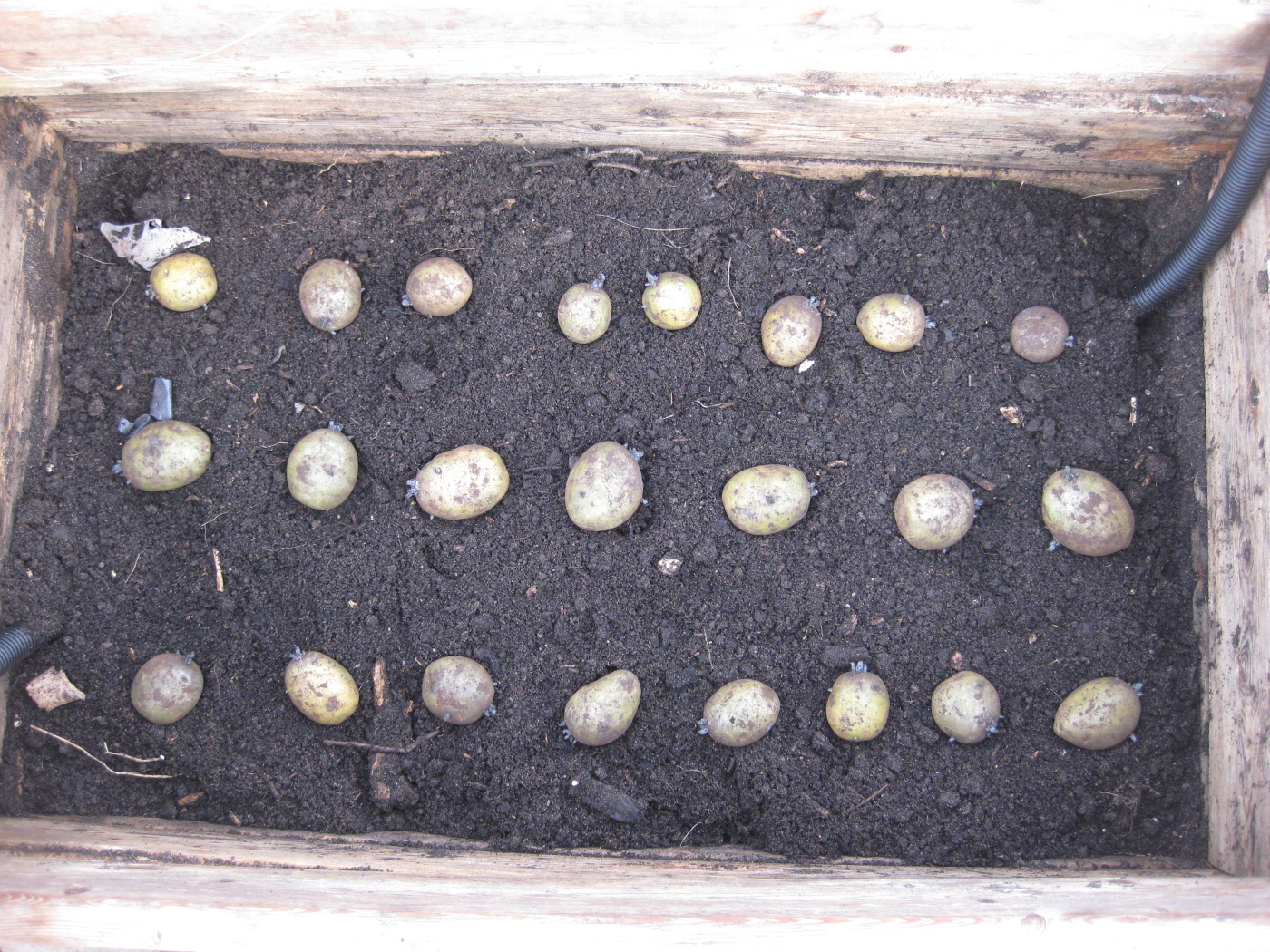 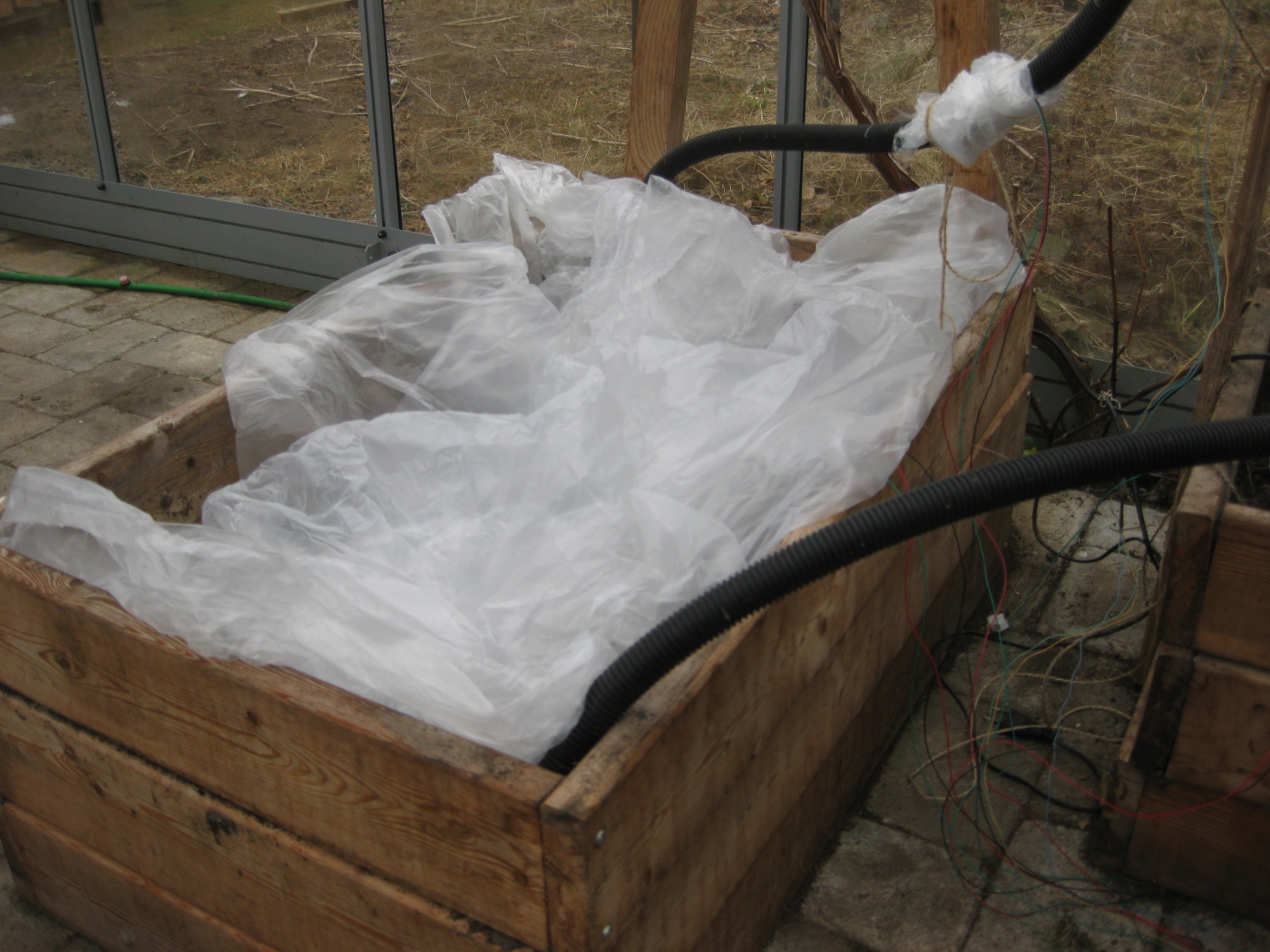 You can then insulate the bed with plastic. Last year the potatoes were sown on the 20th of February. They made it through two periods with hard-frost, because there was sun during the day. 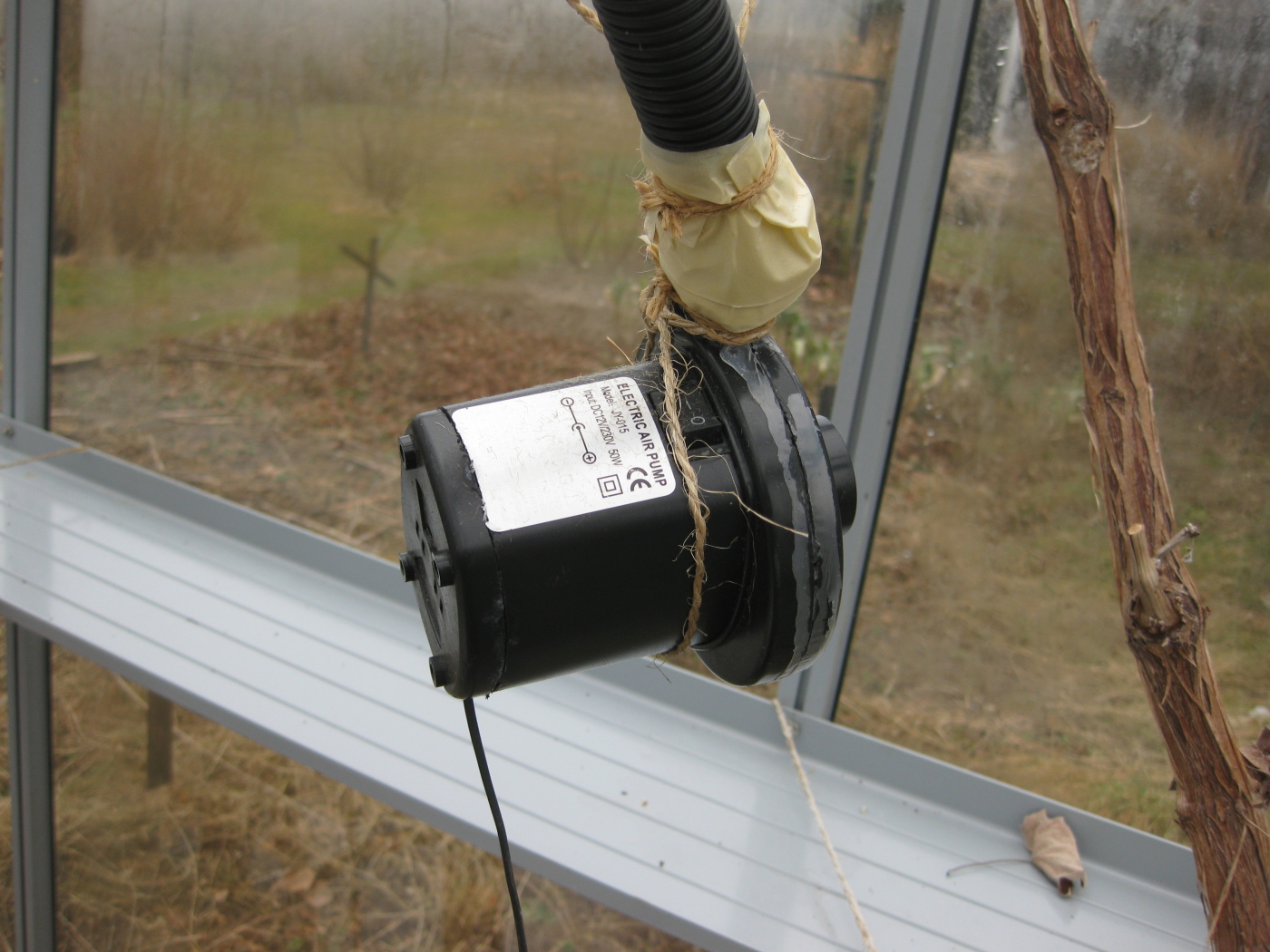 The blower, that blows air through the tubes, is a 12-volt blower for air mattresses. 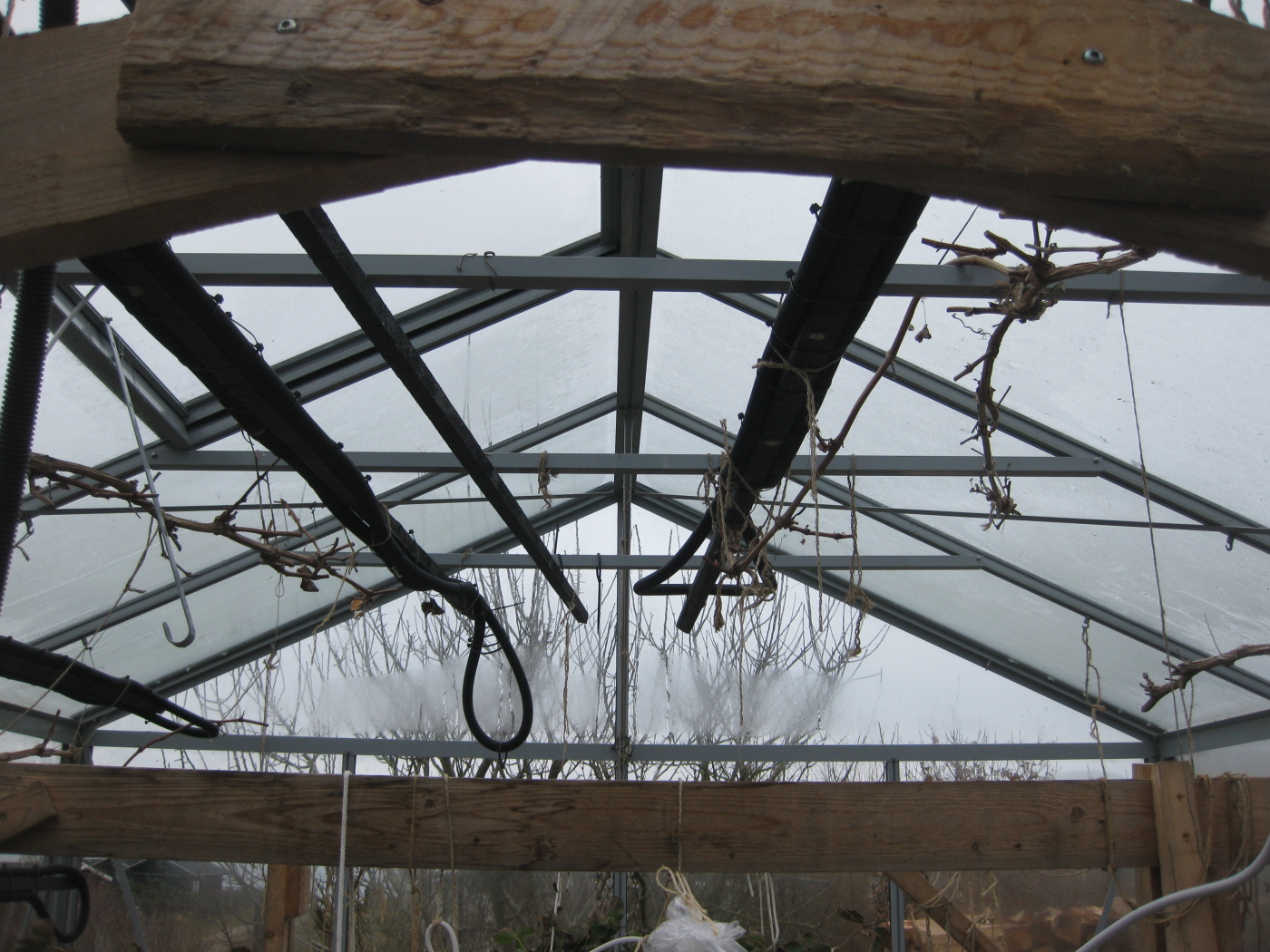 The black tubes run in the ceiling and are then led into the beds. In that way, they work as a solar collector, which heat up the air even more. You don’t need to do that; you could just lead the tubes directly into the soil.

Irrigating potatoes takes green thumbs. When they are transplanted the soil needs to be kept a bit dry, otherwise the tubers will rot. As they grow, they need more water and, in the end, quite a lot. I would recommend sometimes sticking a hand into the soil, if you can’t stick your hand in the soil it is too rigid.

REMEMBER! Don’t fertilize the potatoes, otherwise, you will just get a lot of leaves and no tubers.

You should not connect any electricity yourself, so get an authorised electrician to make an outdoor power outlet with two poles + earth for the greenhouse. Put a thermostat on the power supply of the blower. Measure the temperature in the bed with a soil thermometer and set the thermostat to 5 degrees higher for example.

I might be expensive, but not compared to the greenhouse itself. In this way, the season can be prolonged with at least a month at each end of the year, and the thermometer can be used for other fun stuff, like when plants are overwintering in the greenhouse. 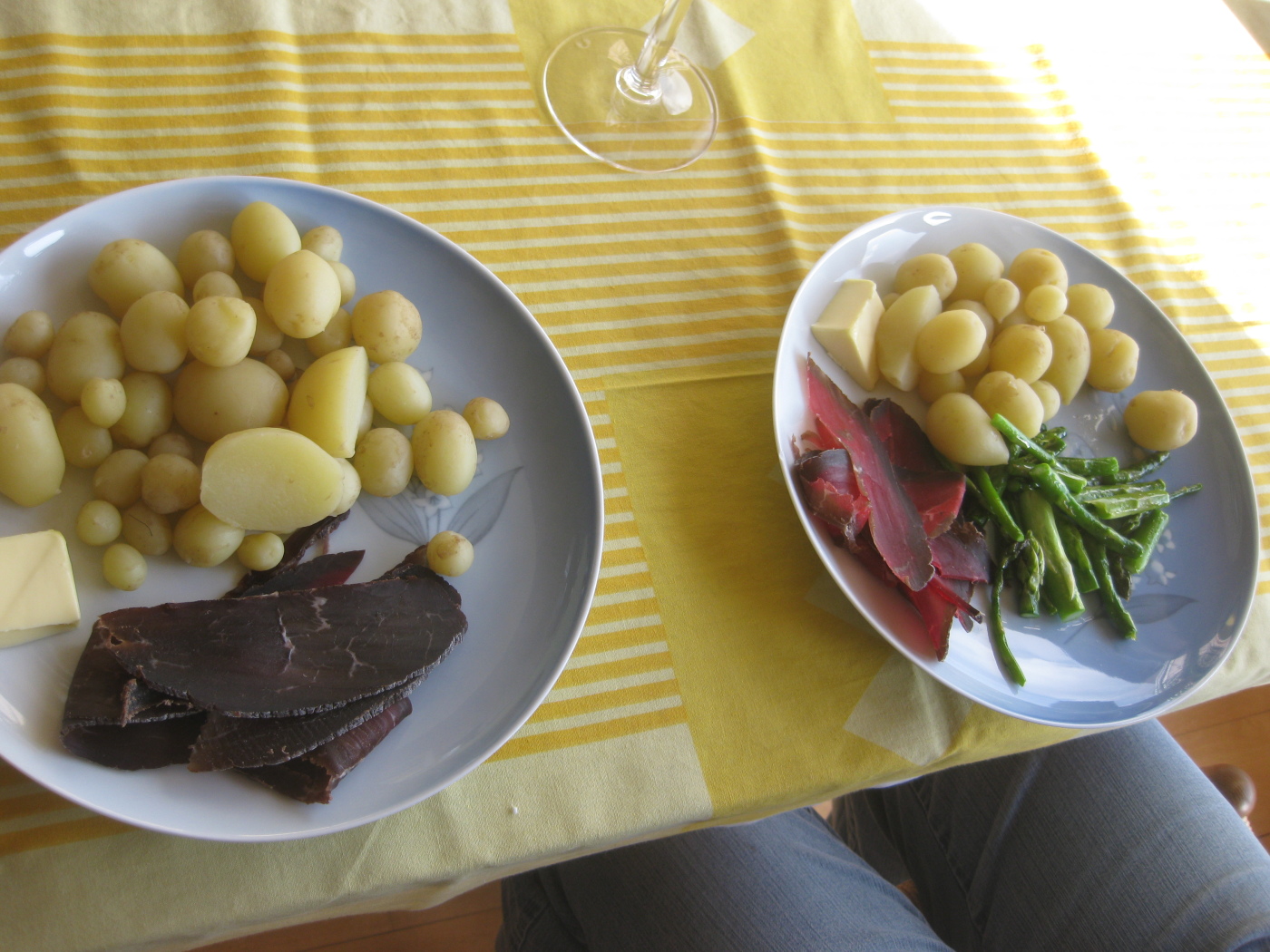 He is a trained gardener, horticulturist and plant pathologist.

Earlier he has worked as a manufacturing consultant at a nursery in Odense, Denmark.

Today he has retired but cultivates in his greenhouse and garden.

His greenhouse is in Røsnæs, Denmark, where Bent and his wife Ellen spends most of their time.

Bent is also a longstanding and active member of the Greenhouse Forum.