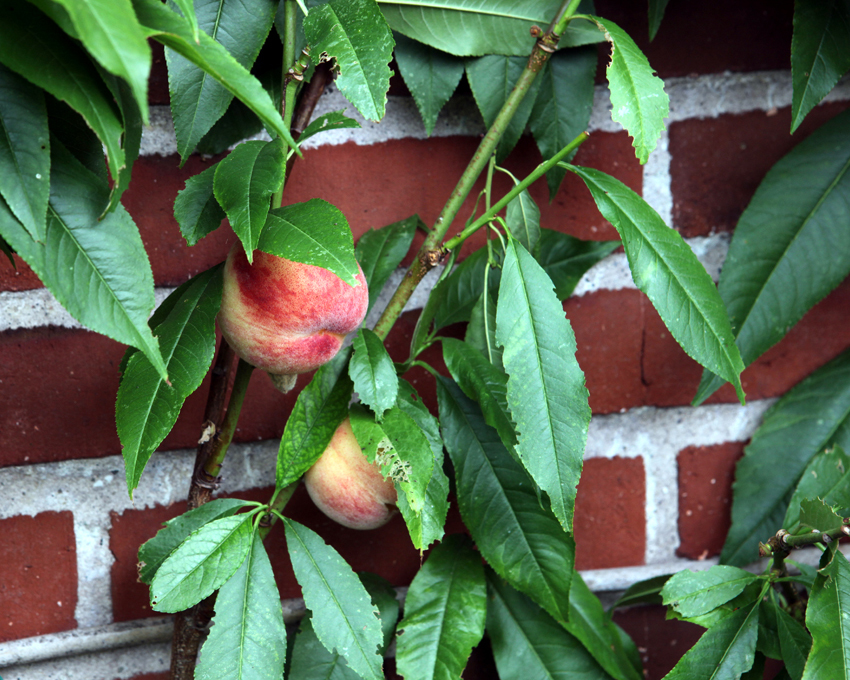 A peach can actually grow outside by a southern wall, but they easily get peach leaf curl. They thrive better in the greenhouse.

Peach and nectarine are downy and plain kinds of the same fruit, which origins from China. It might seem difficult when learning to prune but take it easy, eat a peach and go step by step. :D

Let’s start with the simple explanation and then the elaborate one:

Peach especially sprout from the thin and green shoots which have grown from last summer. In other words, it is basically the buds from last year’s shoots that grow the fruit. The fruit-bearing shoot grows from the stem, that is the stem that grows longer and that piece that grows longer grows the fruit. They can grow from all over the stem. It is then you need to control what grows from the stem. You should remember to care for the newly grown.

Pruning is important and shouldn’t be overlooked. If the shoots grow too close it is impossible for insects to pollinate the flowers, which will reduce the yield unless you do the work as a bee yourself.

The tree is sensitive to pruning and shouldn’t get pruned during the winter. It should get pruned right before harvesting, otherwise, it will be in a great risk of bacterial canker.

Then the elaborated version:

Furthermore, you should remove all that doesn’t fit in there.

Don’t overdo it. Pruning too much can cause bacterial canker.

if the tree gets too thick you can thin out the larger branches, thereby the sunlight can reach the tree.

Peach trees yield a lot of fruit, so it is necessary to thin out. There should be approximately 6 inches between the fruits. Thin out when the fruits are the size of a small walnut – not before and not after. Many fruits fall off themselves because they have not been pollinated.