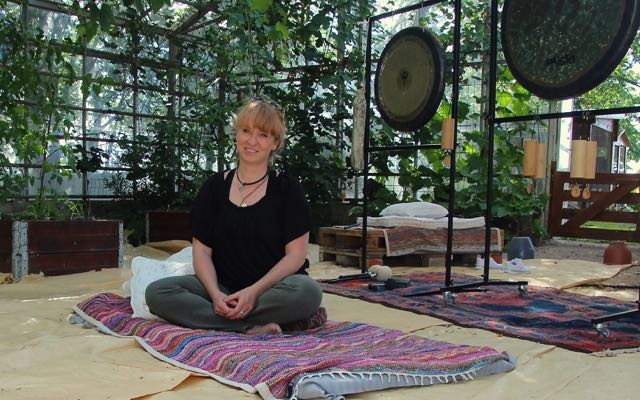 Charlotte loves her gongs, which she uses in her meditation classes in the greenhouse.

When Charlotte Banff and her husband Mikkel moved to the farm on Zealand, Denmark, they got a 3,229 square feet greenhouse in the bargain. It was full of plants and the roof was full of moss. Today, they have created a meditative oasis where wine and old fig and peach trees provide shade and atmosphere.

A 3,229 square feet overgrown greenhouse could probably make even seasoned garden owners run like hell, but Charlotte Banff and her husband Mikkel went straight into the challenge. In 2013 they bought the farm with a view of a fjord, and today they have transformed the greenhouse into a beautiful oasis, where Charlotte holds meditation classes and other events focusing on contact with nature.

“It was a very extensive project. But I have a man with big arms, and my parents came and helped us,” says Charlotte.

The GreenhouseForum visited the farm on a July day in 2020, where the temperature was like an average Danish summer day and white summer clouds roamed across the sky and providing both sun and shade. Along one wall were tomatoes - cherry, plum and beef - and squash in raised beds and further in the room were a couple of grow bags with watermelons and honeydews.

But really, Charlotte is not particularly fond of either raised beds or grow bags.

“I clearly like to get things down to earth. I think you get more power from the ground, in that way, and I feel like it’s more authentic.” 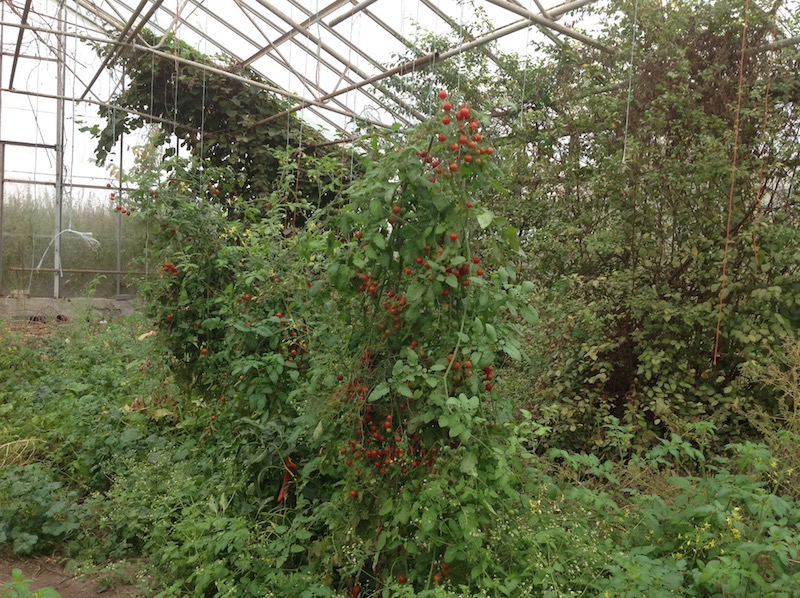 The greenhouse was overgrown when Charlotte and her husband bought the farm in 2013. 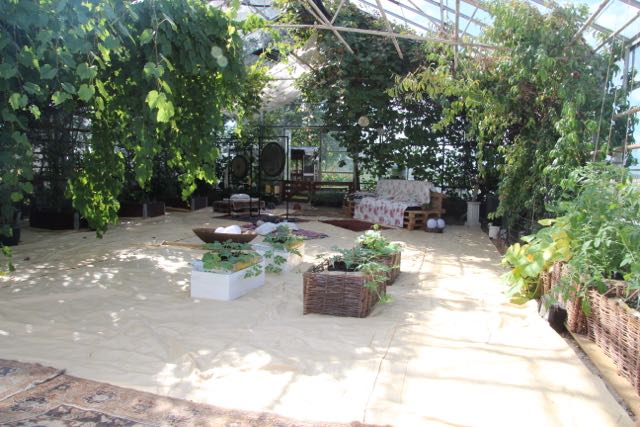 The large greenhouse has been sorted and there is room for both plants and humans.

An experiment of luck and failure

On the other side of the greenhouse, where there is more shade, tomatoes have also been planted - but they are not that big. Charlotte can see that they are not getting enough sun, the vine shadows too much, but she likes to experiment, so she tries a little harder. She bought the tomatoes in the shade as small plants, while others were germinated inside the house. In addition, there are a few cucumber plants that have already begun to bear fruit.

“I'm still a little new to cultivating. The first year I planted 15 different tomato sorts and 10 pumpkin sorts - I used all the seeds in each bag and we ended up drowning in pumpkins and tomatoes. I also planted squash, carrots, leeks and beets outside, but what I had not thought about was that the previous owner had had ducks and chickens walking on the grass, so there was so much nitrogen in the soil from duck and chicken manure, that we got giant beets and squash of 11 pounds - they were completely inedible.”

Charlotte laughs indulgently at herself. And that is probably the approach she has to both growing vegetables and living on a farm where the list of chores is always endless. She has decided to focus on what succeeds and what they have time for.

Both she and her husband Mikkel work. She is self-employed in the IT industry, but also does healing and craniosacral therapy on animals and is just starting up an Animal healer Academy.

She has always known she had the abilities, and she has always been fond of animals. The farm also houses a herd. 3 dogs, 3 cats, 6 horses, 6 hens and the cock Frederik who rules the place with a firm claw.

"He is a rocker, you should not stick your fingers through the chicken wire," she said as we looked into the chicken coop, where Frederik showed the boundary between the fence and us. 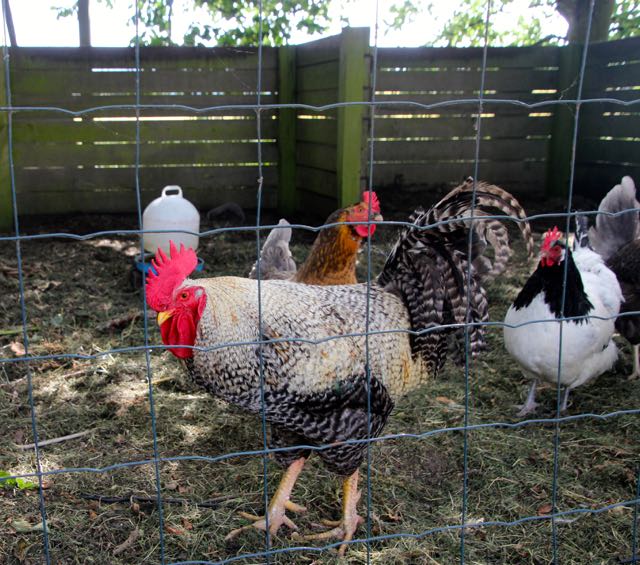 Frederik is marking his territory.

"You cannot be stressed out here"

In the greenhouse lives a blackbird couple with nestlings. There was much activity while we sat in there. There was a warm and calm atmosphere that instinctively would make one breathe all the way down to the diaphragm. Charlotte was sitting on the ground, on a rug next to her great passion - two big gongs. She uses them for her classes for both meditation and sound healing. The vibrations from the gongs affect the body and put it in balance, she explains. The greenhouse is something special, she thinks.

"It's impossible to be stressed out here." 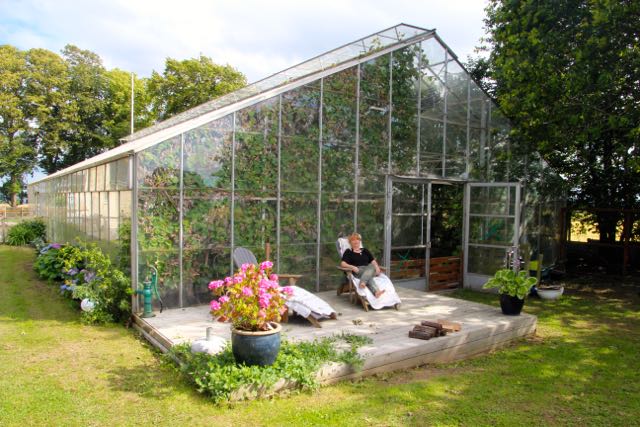 Charlotte and her husband have made a terrace in connection with the greenhouse. There they can enjoy the evening sun.

Under the ceiling, the vines were sprouting - there were seven different vines, said Charlotte. In one corner was a kiwi tree – “it has no fruit, but when it blooms it is completely magical,” said Charlotte. In another corner was an old fig tree with lots of green fruits, and three peach trees abound with fruits that were unfortunately not quite ripe yet. But when they are, it is a joy to put your teeth into a fruit and feel the juice run all the way down your arm. Charlotte calls the greenhouse an energy container.

“Here, time seems to cease, and I am taken back to the present. I am close to nature and still protected from wind and rain,” she says.

The latter, however, is not quite the truth. In fact, it rains in several places when the Lord turns on the waterworks.

“It can be a bit of a challenge when I have 30 people in here for a meditation class - we have to move around so that everyone is dry. We change glasses regularly, but we cannot do it all at once.”

That is how it is with a greenhouse - it is always in process and things happen at the pace they can and should. Perhaps it is in its simplicity, therefore a greenhouse can be a meditative space.