Ariette and Jens Sørensen have put two Halls greenhouses together and created an orangery with room for the old fruit trees. 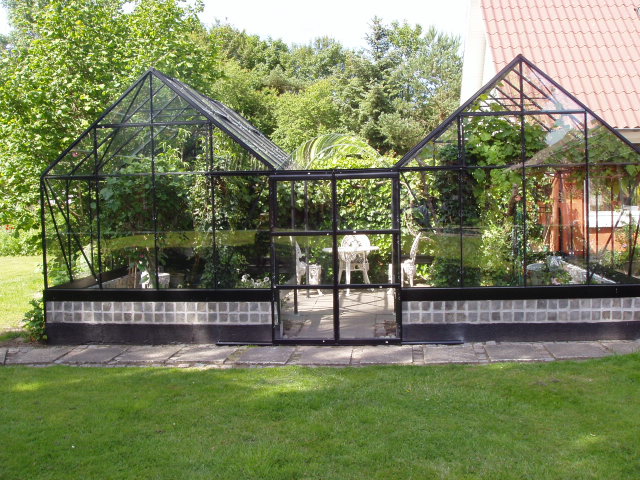 In their garden was a wooden greenhouse which created shelter and good growth conditions for the old fruit trees. The greenhouse was put in the ground, but after 38 years of service, they wanted a new solution. The trees were solid, so Ariette searched all the greenhouse suppliers for a model that was commodious enough to fit the old trees and at a fair price.

“We didn’t want to use 5.000-6.000 pounds on a new greenhouse, but we found this model from Halls that fitted both in price and design,” says Ariette Sørensen. 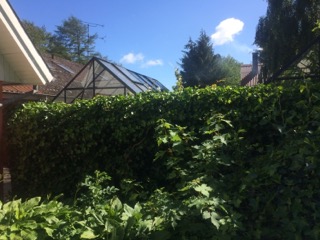 The greenhouses are placed on the dwarf wall of the original greenhouse. 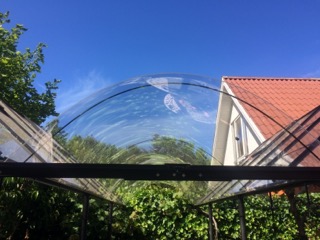 The two houses are connected through an aisle covered by an arc of acrylic glass. Photo: Ariette Sørensen

Gable of bricks and acrylic glass

The two houses are joined to an arc of acrylic glass and the door that is placed in the middle is made from the original doors of the greenhouses. One gable is a brick wall where beautiful green ivies are growing. “The wall is a remnant from the old greenhouse, so we wanted to keep it. That resulted in a lot of leftover glass which we could use where the doors originally were placed,” says Ariette Sørensen.

The house is approximately 258 square feet with lots of room for both trees, humans and flowers. It accommodates a fig tree, a nectarine tree and an apricot tree, which was pruned so much when renovating, that Ariette doubts it will bloom again. She also has flowers in her greenhouse – among others are petunias, ox-eye daisies and roses, and then there are tables and chairs for people to sit and enjoy the entire splendour. Crops like cucumbers and tomatoes Ariette grows in another greenhouse. “This is our ornament greenhouse. We are very happy with the result and enjoy using it,” she says. 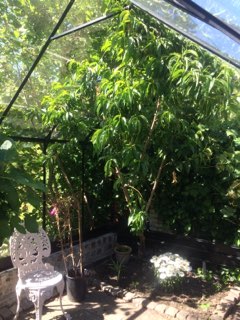 The old fruit trees have gotten a new life in the orangery.

The two greenhouses are of the model Halls Universal 128 of 106.5 square feet.

All in all, the unique orangery has cost 1.782 pounds.