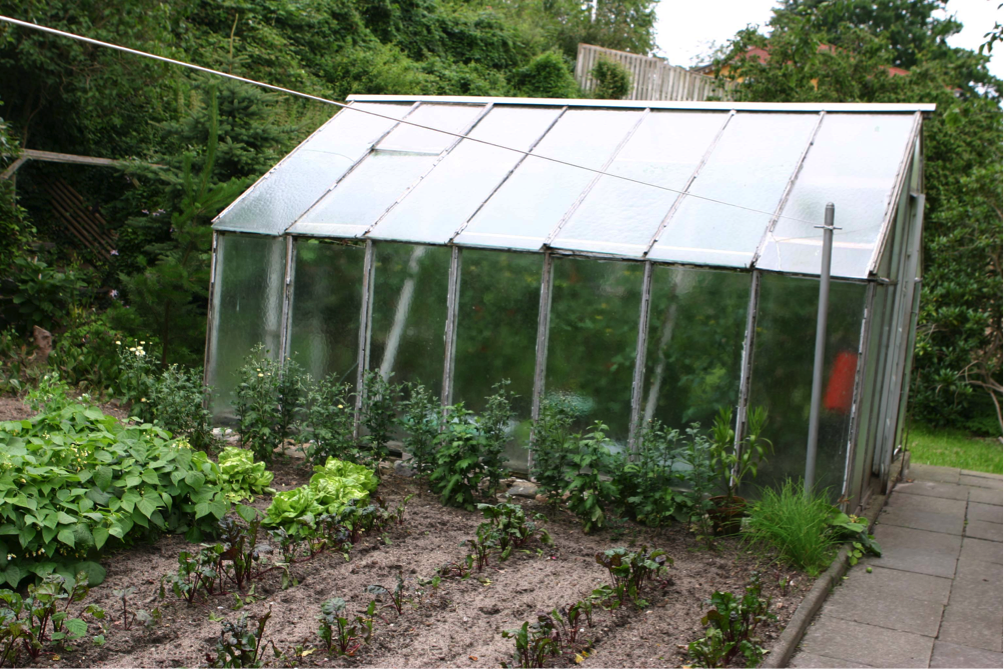 This self-built greenhouse is rotten to the core and has been for several years. It must be 40 years old. It has no wind supports and no deep foundation. Nevertheless, it has survived all storms and to this day, it still stands in a garden.

An investigation of surprises

We generally get more storms and wind, but we have also got more greenhouses in our gardens. Frequent and more powerful storms present greater challenges for us and for the manufacturers because even though there are quality differences in greenhouses and room for improvement, we can also do a great deal ourselves. The picture above of an almost rotten greenhouse still standing where it was put 40 years ago testifies that a very crucial factor is shelter. The more shelter, the greater the chances your greenhouse has of surviving.

If your greenhouse is not sheltered, then a foundation and especially an anchorage to the foundation is of great importance. That shows in the first data from a large country survey I launched in early December. The Danish storm Gorm had just shown his grim side and on several social media people reported broken glass and flying aluminium profiles, but also overthrown buildings and trees, so the storm was at full pressure.

When the wind is strong, the wind scales with the wind speed’s square, which translated means that the forces from the wind become four times greater when the wind speed doubles. The question is then what you can do when you do not have the recommended shelter.

A foundation is not enough

In the questionnaires that were sent back, in many cases along with pictures, you can see that even though people have a foundation, several greenhouses have simply been blown off. Although foundations that are not dug quite deep are fixed, many simply forget the most important thing - to anchor the greenhouse to the foundation, or they have done it, but eventually, the anchorage is rusty, or too weak, and is then torn up.

A good foundation is made from galvanized anchoring fittings that must be lowered into the foundation and goes up through the base of the greenhouse. If you have cast and forgotten the fittings, you must drill holes as long as possible and insert expansion bolts with good and thick washers. As I said, it is the anchoring to the base that is the biggest problem and rarely the foundation itself, so check if everything is as it should be.

Cast all the way up to the base

Most make a point foundation. Common greenhouses are also built on those. A point foundation is a pipe with concrete down to a meter depth in at least each corner and in the middle of each long side. The steel base purchased with the greenhouses is then anchored to the point foundation. The angle irons that come with it are often thin and flexible aluminium irons. They are excellent if you remember to bend them at the bottom so that they cannot just tear up. A problem with those is that the cast is not very close to the base, so if you anchor the irons with a gap of just a few inches, then the greenhouse will rock when the wind blows because the irons bend.

You must remember to cast all the way up to the greenhouse base and if you have not done so, do it now. Also, remember to use the steel bolts and nuts that come with when you assemble the steel base and thus not weaker aluminium bolts that break easily when you tighten or when the wind blows. 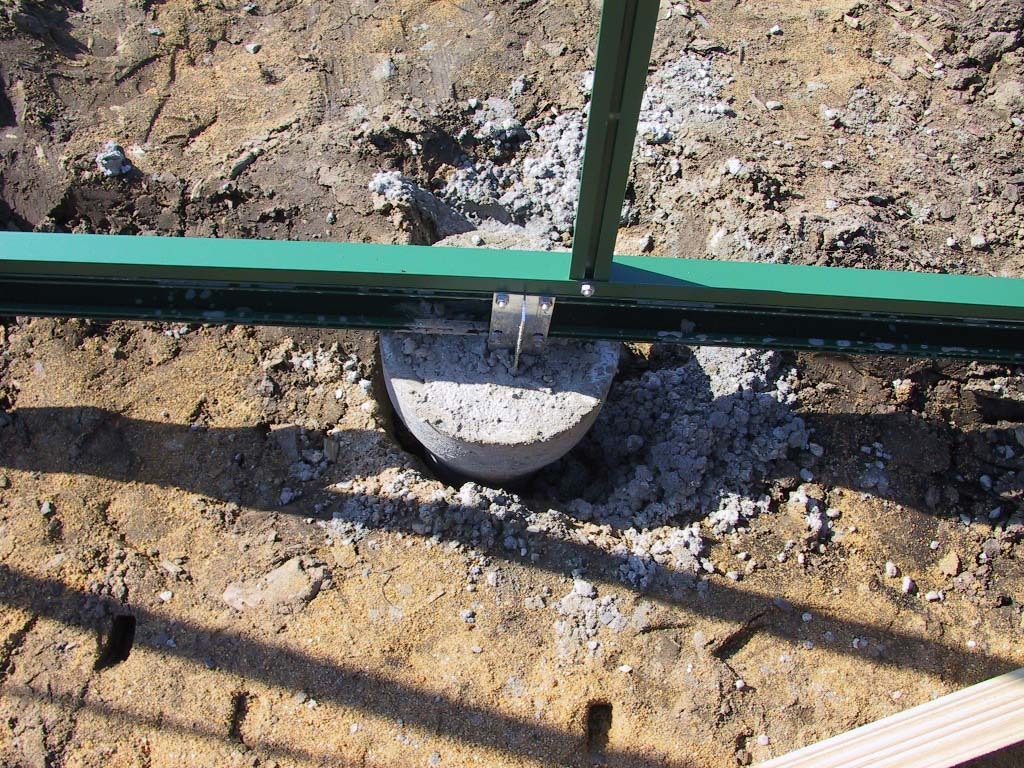 Here is a point foundation. A pipe has been dug 3 feet into the ground and filled with concrete. If you do not fill up concrete to the greenhouse base, the base frame is at risk of bending, and the greenhouse will then rock when the wind blows. 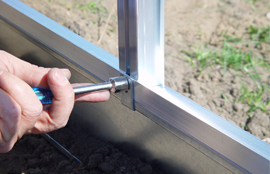 It is also extremely important that you attach the base frame and the vertical profiles to the foundation. Many greenhouses are simply blown away from their foundation because people have forgotten this important detail, or have used materials that are not wear-resistant.

Should the windows be opened on the sheltered side when it is windy?

Many, according to the study, open the windows on the sheltered side, or open the door partly, and believe that has saved their house from collapsing. The theory is based on the theory of the Swiss scientist Bernoulli, who shortly and popularly says that moving air has less pressure than standing still air. In other words, according to the theory, there is an overpressure inside the greenhouse, and therefore you open the windows. However, this is a misunderstanding of the theory. There are several assumptions that have not been considered. For example, a greenhouse is not completely tight, so there may be different pressures inside the house. Still, it may make good sense to open a window on the sheltered side, for the sole reason that the glasses are probably assembled so that they blow out easier than they are pushed in, but there is no guarantee at all, and the investigation shows that. 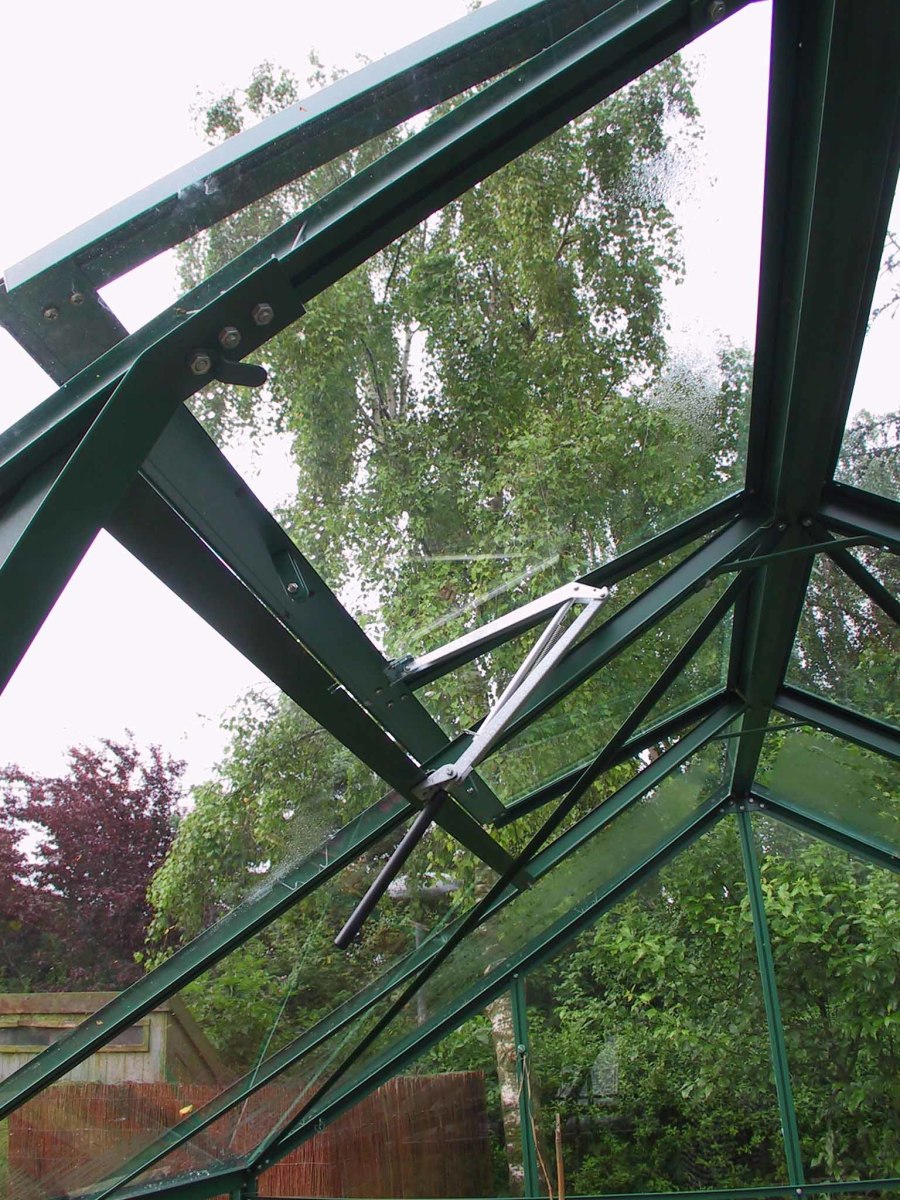 Does it help to open the windows on the sheltered side? Maybe! According to the theory, there is an overpressure inside the greenhouse, but that does not always apply to greenhouses, as they are not completely sealed.

The study shows, not surprisingly, that toughened glass can withstand pressure better than ordinary glass. Polycarbonate blows out quite easily, but if they are glued on, the experience is that you are more secure. Toughened glass is almost always glued on, and it apparently creates a stronger overall construction. Virtually all glass that flies off is not glued. On the other hand, there may be broken windows, but this is often seen in greenhouses with thinner profiles. Here the movements are so great that the windows simply break when glued on. If you have often experienced broken windows, I clearly recommend using a rubber strip that is pressed into the profile (they can be bought as an accessory) and put clips in the windows instead of glueing them in. Then the window can move together with the profiles. 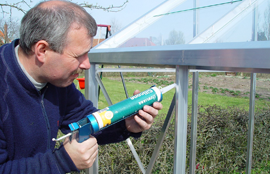 Glue can prevent the glass from flying off and it is especially recommended for polycarbonate.

The price of beauty

The wind pushes what it can, and it can push the greenhouse oblique. More photos show bent struts. The struts have worked against pressure from one side, but not from the other, and if the struts on one side are bent, the strength will decrease. If they are not mounted as instructed, things can go completely wrong. Greenhouses, garages, and sheds are always installed with a strut. A strut ensures that the forces are "distributed" better, so if the wind pushes the greenhouse one way, one strut secures and pulls the greenhouse the other way. Struts do not make the greenhouse just as pretty, but beauty must suffer for safety.

At a minimum, there must be a strut in each corner, and they must go opposite each other. The stronger the struts are, the better. And if they are bolted to the longitudinal profiles so that they do not float freely, it is even better. It is also important that the bolts are not pulled out. Therefore, a bracket at the anchorage has two holes, and with the strut welded on the bracket, it works as additional securing. 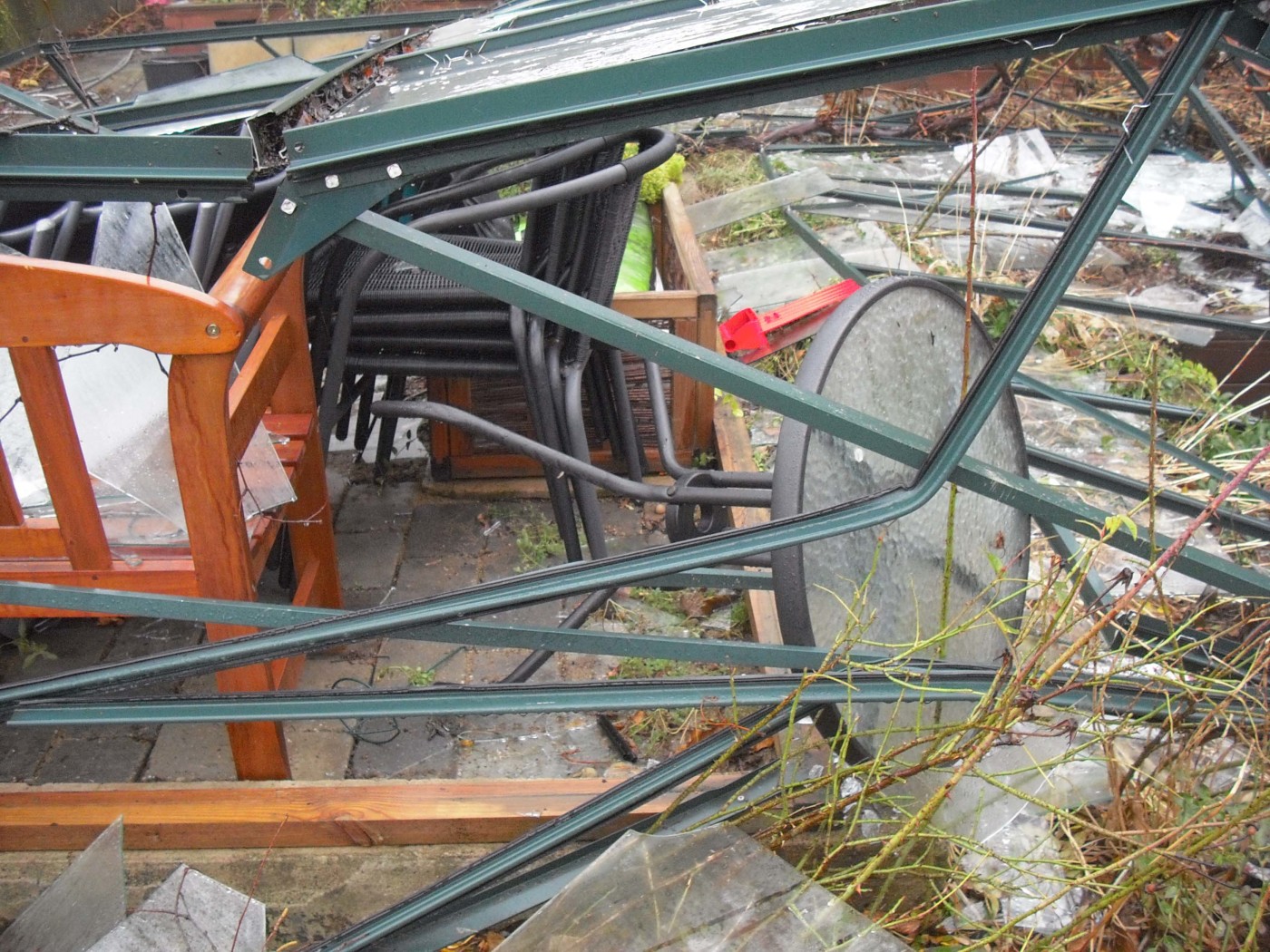 The struts should be mounted correctly. In that way, you can avoid your greenhouse ending up like this after a storm.

The sore point of the greenhouse is the gable with the doors. Several report doors that have blown out. When the door is blown out, part of the stability disappears. Therefore, the doors must be locked, and if they cannot, then secured with sandbags. Sliding doors appear to be most exposed, while hinged doors hold significantly better, perhaps because they can most often be locked and also close tighter. The part around the doors is also a weak point because there is almost no room for a strut. 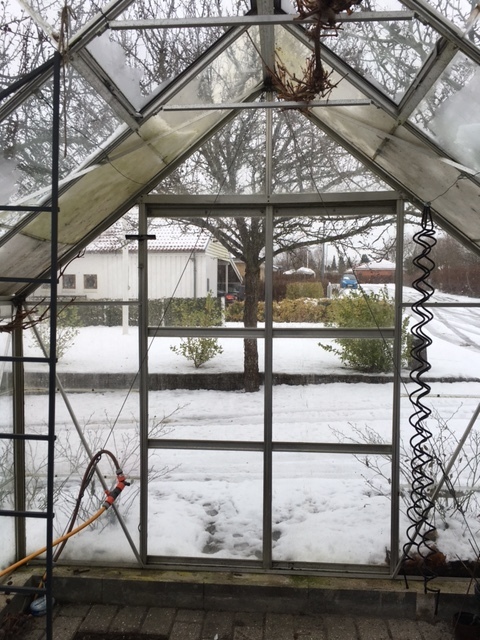 The gable with the door can be a weak point because the struts cannot go very far out to the middle of the base. Elin Træholt has solved the problem by mounting a steel wire from the roof down to the base, so that they form a wind cross together with the fixed struts. She has also made wind crossings in the roof with steel wire.

For you who have not set up your greenhouse yet:

Do not compromise on the foundation. Build it as it was for a shed or garage, seek help on the internet. Cast the anchor iron (galvanized iron into the foundation if you choose a fully cast foundation.) See a point foundation here.

It is especially important to attach the greenhouse base to the foundation. Surprisingly many forget that, or they dawdle it.

For you who have assembled your greenhouse and you who must:

Make sure that the concrete is in contact with the base where the angle brackets are mounted, otherwise, you will have to cast again (corners, centre, and around the doors).

Make brackets with two holes where the struts are mounted. Feel free to weld the struts to the brackets.

Replace thin struts with heavier struts or put on new ones. Assemble the struts in the middle with a bolt. Pay special attention to the door sections and let the struts go as diagonally on the gable as possible.

Shelves anchored to the longitudinal profiles throughout the greenhouse sides or gables reinforces the house.

Keep the doors closed and firmly anchored. Open windows on the sheltered side can in some cases save the greenhouse. However, it can increase the pressure difference so that the pressure increases on the windward side.

Create shelter with hedges so that the wind seeps in and, for example, is not just thrown over a wooden fence. The latter amplifies the speed of the wind.

Anchoring the greenhouse to the foundation, close doors and use struts.