Musmann-forlag.dk has especially for The Greenhouse Forum allowed a small sampler of the many delicious sweet things from the Danish book Sea Buckthorn Desserts and Sweet Things (Havtorn deserter og søde sager). 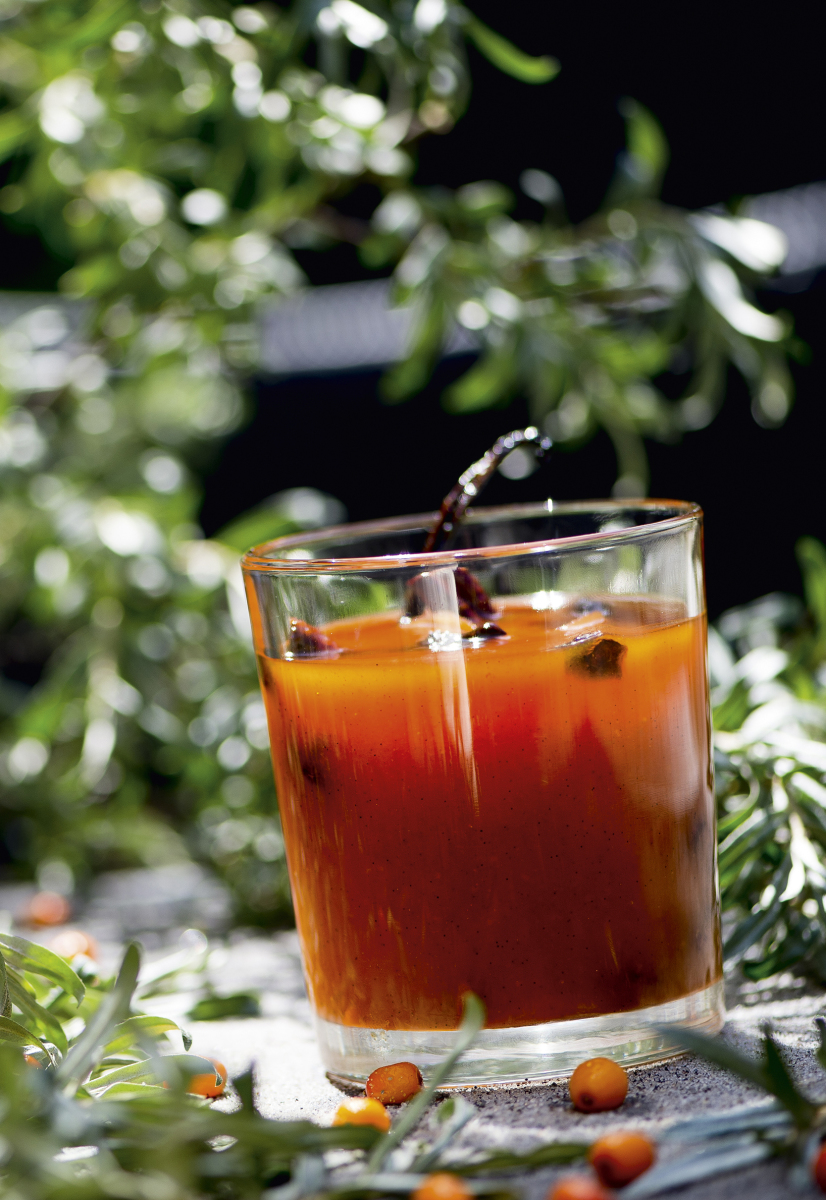 Peel the skin off the limes and use a thin peeler to peel off the zest of 2 lemons. There should not be any of the white layers on the peels. Press the juice from all the citrus fruits. Cut open the vanilla pods and scrape out the pith.

Put the sea buckthorns in a pot with the citrus juice, anise, cinnamon, and pith and skin from the vanilla. Boil it, let it simmer for 10 minutes and then turn off the heat. Let it sit, covered, for a couple of hours before sifting it. Take out the cinnamon, vanilla skin and star anise, and save it. Use a rubber spatula to squeeze out the juice from the berries. Pour the juice back into the pot and add sugar and lemon peel. Boil down the juice to bring out all impurities. Add the vanilla skin, cinnamon and star anise again and let the juice simmer for 15 minutes. Pour it all in scalded glasses with caps. Store it in the fridge in up to two months.

Spiced sea buckthorn syrup is typically used in desserts, cakes and sweet drinks. It is lovely for squash when mixed 1:6 with water or sparkling water. 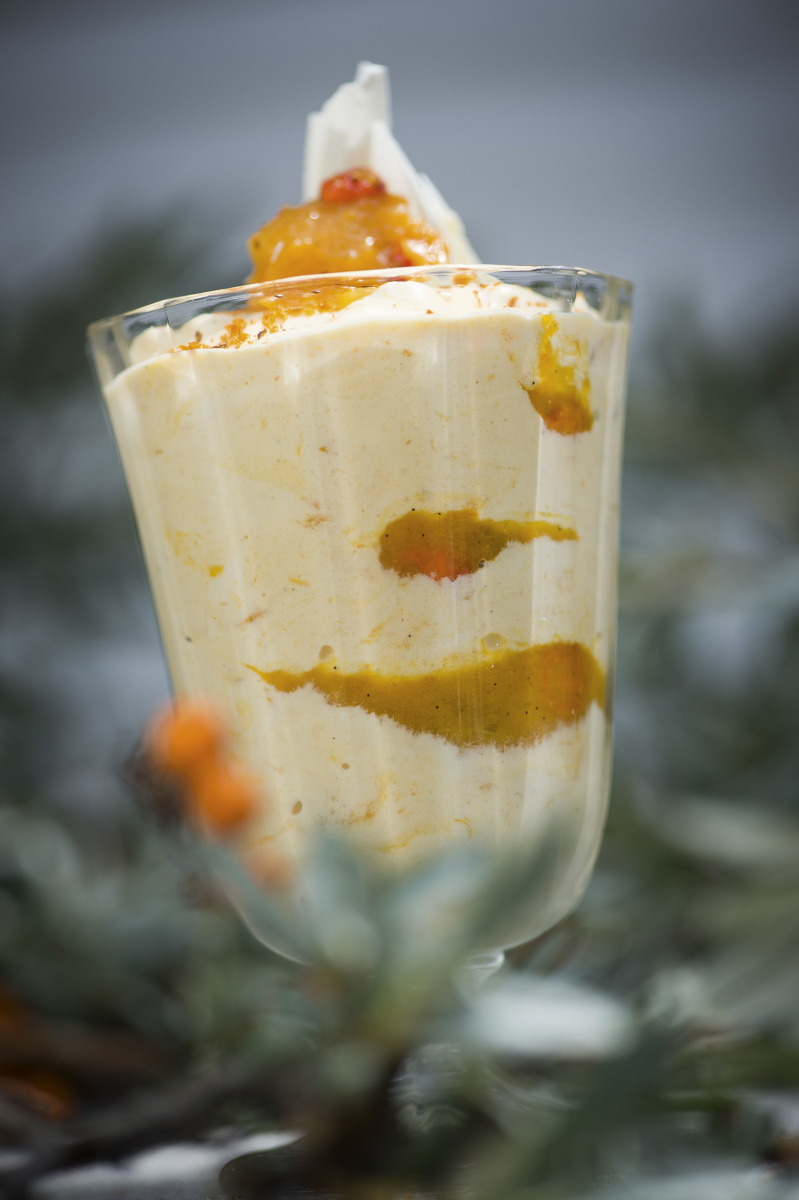 Put the sea buckthorns in a pot and mash them with a cooking spoon. Cut the apples in small pieces and put them in the pot with sugar and the vanilla pith. Boil it and let it simmer for approximately 15 minutes, until the apples have softened. Whip it all together with a whisk. Pour the compote in a bowl and let it cool in the fridge. It should be completely cool before using.

Melt the chocolate carefully using a water bath, it should not exceed 40 degrees. Whip the double cream into whipped cream, not too solid. Whip the egg yolks with icing sugar until they are firm and airy. Soak the gelatine in cold water and melt it in the warm sea buckthorn juice. Gently fold the chocolate in the egg yolks and then fold the sea buckthorn juice in the mixture. Mix it with the compote and then whipped cream.

Pour the mousse in glasses and let them cool before served. 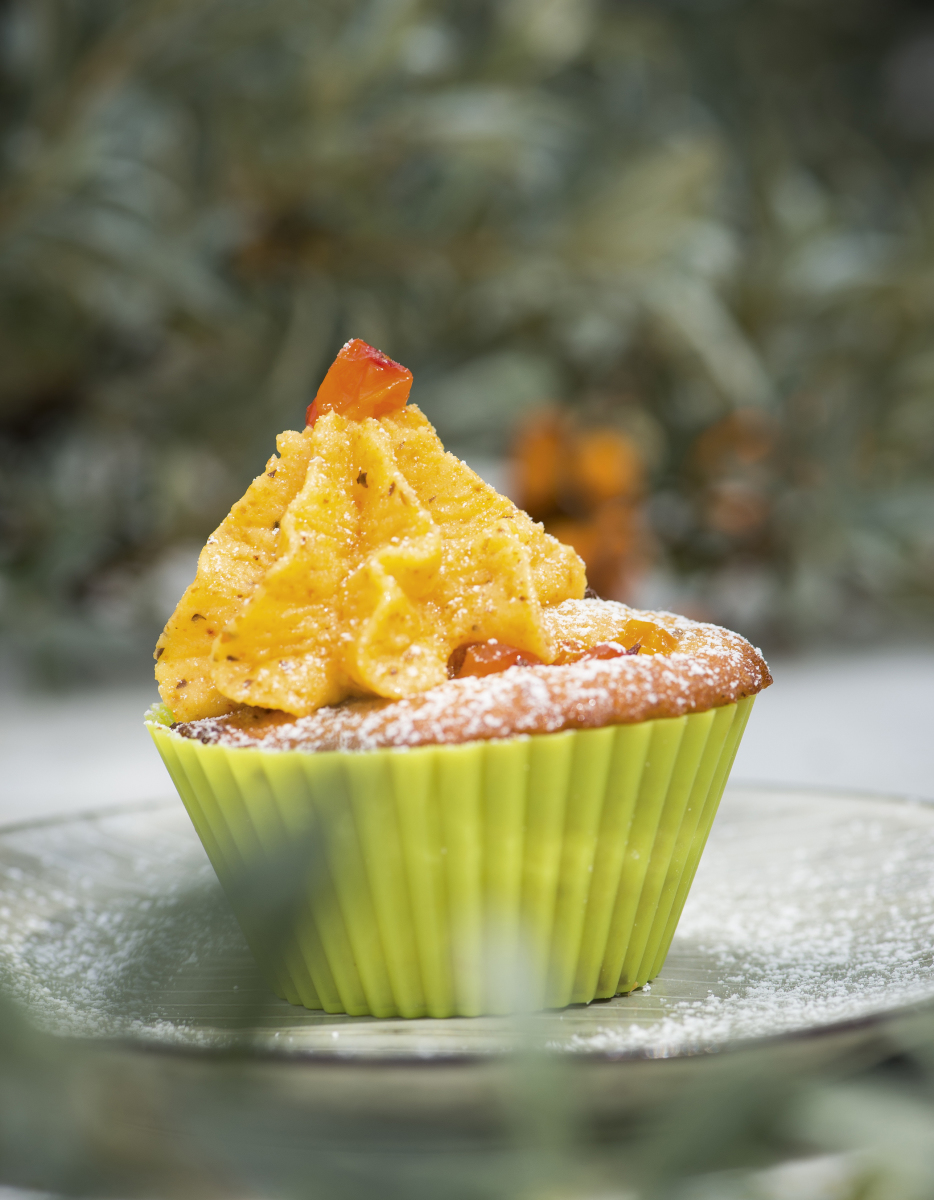 Cupcakes with banana and sea buckthorn

Preheat the oven to 180 degrees. Peel and mash the banana. Put the banana, sea buckthorn purée, butter, vanilla sugar and cane sugar in a bowl and whisk it together. Add the eggs, one at a time, and whisk thoroughly. Sift flour and baking powder in the bowl and mix it in. Distribute the batter in 12 muffin forms. Put the preserved sea buckthorns on top and bake the cakes for 15 minutes. Let them cool on a griddle.

Put cream cheese and butter in a bowl and whisk it together. Add marmalade and icing sugar and stir until the mixture is even. Put the frosting in an icing bag and distribute it on the cakes. Decorate with preserved sea buckthorns. 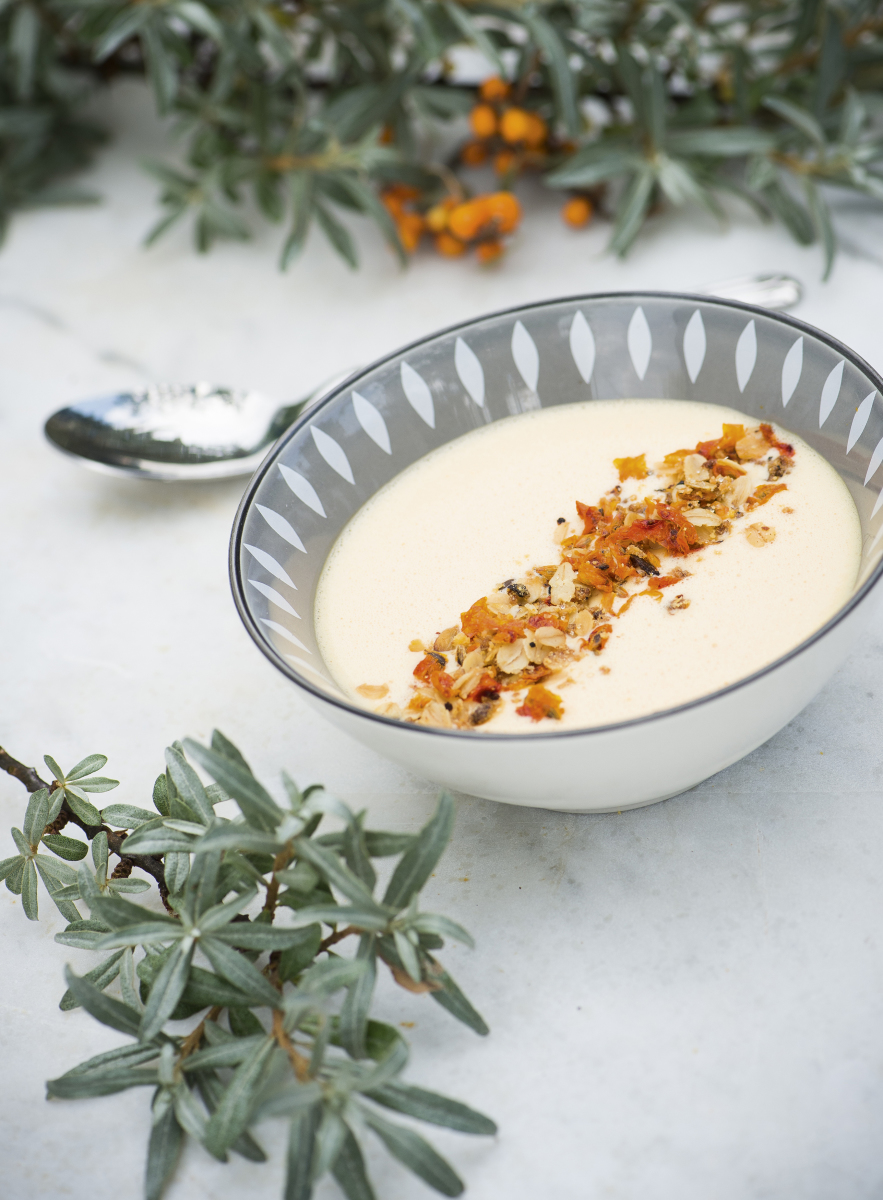 Whisk egg yolks and sugar into a firm and airy mixture. Add buttermilk, skyr and the juice plentiful in vitamins. Stir it, then cool down the buttermilk soup before served with a sprinkle.

Melt butter in a pan. Add oatmeal and sugar and toast the mixture. You need to keep stirring it to not get burned. When it is toasted golden, add the dried sea buckthorns. If you don’t like the pips from sea buckthorns you can pulverise them.

Toast the almond slices in the oven at 165 degrees until they are vague golden. Melt the white chocolate using a water bath the chocolate should not exceed 40 degrees.

When the almond slices have cooled to room temperature, mix them in the chocolate with the rest of the ingredients. Distribute the mixture in small pieces on baking paper and sprinkle with pulverised sea buckthorn.

Cool them and store them in a box with a cap. Preferably, in the fridge.