Mexican temptations in the greenhouse 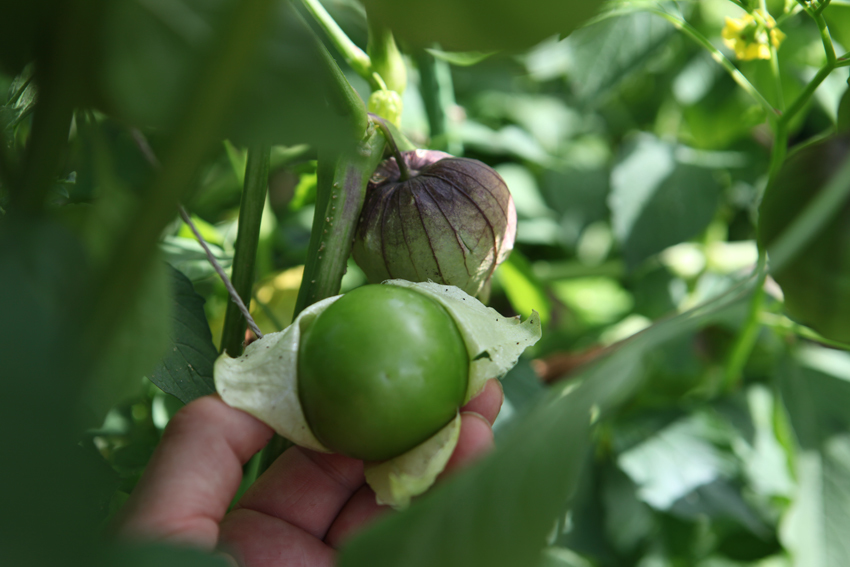 The fruit is almost ready to bee harvested. Also, tomatillos attract bumblebees in your greenhouse.

It is not a tomato, but it looks like it and it’s also in the solanaceous family, sometimes called a green tomato. The green tomato has never been well received in Europe. In Mexico, its original home, the green tomato is a delicacy. Last year I grew them, but my wife tore them out as they didn’t ripe. I didn’t get mad, just a little, but she promised to make up for it. She says the greenhouse needs to be cleaned out sometimes and the tomato was growing too big. She knew the name tomatillo, but not the taste. To make up for last year she grew and took care of them this year, which she has not regretted. I would agree that they are worth it, they just need to be well prepared before served.

Tomatillo has an ancient growing history. There are different varieties of tomatillo. The Tomatillo “Purple”, Physalis philadelphica is 2 inches in diameter, green when unripe and purple/black when ripe.

The tomatillo “Verde”, Physalis philadelphica is 2 inches in diameter, yellow/green when ripe and dark green when unripe.

The tomatillo “Cinsineros”, Physalis philadelphica has larger fruit than other tomatillos, it is yellow when ripe and green unripe.

The taste is difficult to describe. It doesn’t taste like something else; it is slightly sour and maybe a little fruity. The taste is somewhat similar to a semi-ripe gooseberry. You can eat it raw in salads, baked or make a salsa of it. Raw the fruit is crispy and filled with tiny seeds, which might be why I think of semi-ripe gooseberries when eating it.

Start growing inside and continue outside

Tomatillo should be pre cultivated inside. Seeds are sowed in pots late March/early April and transplanted in a greenhouse or outdoor at the end of May. I have a couple of plants by a south wall. They thrive but the growth is behind the ones in the greenhouse. On the other hand, the ones in the greenhouse are difficult to control. They take up too much room, but they can tolerate standing close and they do, even though the guidance on crop management recommend distance in between. When they tolerate standing close it might just indicate them being well-watered and filled with the nutrients they need. Mites have damaged the leaves, but the plants don’t care and all season they have looked healthy. If the plants are well established, they can tolerate drought.

You harvest the seeds for next year yourself. The seeds sprout the best when taken from ripe or semi-decayed fruits.