Tomatoes and cucumbers are classics in the greenhouse. Here are a few tips for success with cucumbers and tomatoes. 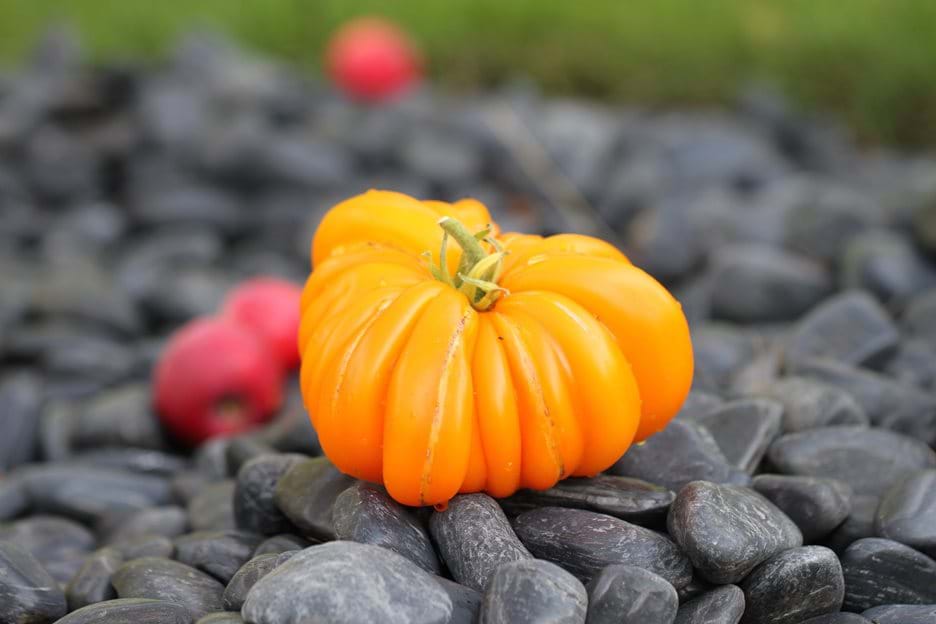 One of the joys of cultivating tomatoes is that there are so many different sorts. This one is Beauty Lottringa Orange.
Photo: Albinus frø 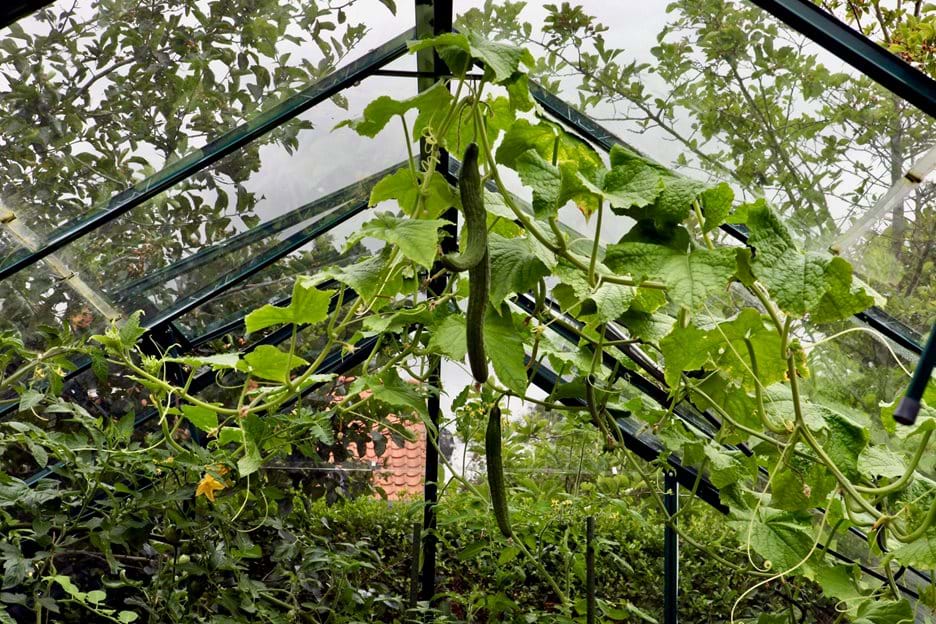 They are growing! Here is how you also can cultivate cucumbers. This proves that the cucumber plant actually is a climbing plant.
Private photo.

The tomatoes you cultivate taste way better than those you can buy, that is for sure.

No less than 400 different substances contribute to the flavour of a tomato. This includes sugars, organic acids and different oils. Tomatoes also contain a bit of salt. The normal red tomatoes do not contain as much salt as the orange ones, that have eight times as much salt in them compared to the red ones. Yellow tomatoes are in between the two.

Although it is not just sour, salt and bitter that determine the flavour. A fifth flavour component called umami also affects the flavour. Often umami is said to be the flavour of meat and protein. But when it comes to vegetables, the tomato is full of umami flavour. Tomato sauce which has been boiled down for a long time, will eventually have a similar flavour as meat sauce.

Sometimes the store-bought tomatoes can taste flat. The reason for this is that they are stored refrigerated which makes the tomato loose some of the flavours. According to previous science, 65 percent of the fragrances in a tomato will be gone in just 7 days if stored in a refrigerator. They will taste just the same as if you were holding your nose when eating. Refrigeration stops the biological processes and cannot be restored even if the tomato is no longer in a refrigerator. The level of sugar and acid stays the same, but the levels of some specific molecules that affect the nose, are reduced significantly. Therefore, it is only the tongue that is affected and makes it taste flat. So, the condition for your home-grown tomatoes to taste the best, is that you avoid putting them in the refrigerator.

The tomato flavour is one thing, but whether it is healthy is something else. In the 16th century, the tomato was considered poisonous. Tomatoes belong to the family Solanaceae (the nightshade family), but do not contain the same toxic substance solanine as green potatoes do. Although green tomatoes contain the substance tomatine, which is poisonous, but you can eat pickled green tomatoes in moderation.

The healthy part of a tomato is the C-vitamins and the provitamin A, which the body turns into vitamin A. Regarding minerals it is especially potassium that the tomato contributes with, and moreover, they contain lycopene, an antioxidant that prevents atherosclerosis.

It is important to not use too much fertiliser when it is hot outside. The plants use lots of water to cool down, and if there is fertiliser in it, you will end up over-fertilising the plants. Rainwater is best for tomatoes, but if they get too much of it, they risk not getting enough calcium. Therefore, irrigate every third time with tap water. Especially if the plants are planted in only peat. The plants can easily get blossom rot if they need calcium. Blossom rot will give the tomato black spots on top of the tomato. Crop rotation is important unless you are cultivating in growbags. Crop rotation can be done by moving your beds with plants from the family Solanaceae around or by replacing the soil in 5-20 cm. preferable 20 cm. Also notice that liquid organic fertiliser is not recommended for capillary boxes. Organic fertilisers should have contact with the microorganisms in the soil to release nutrients. 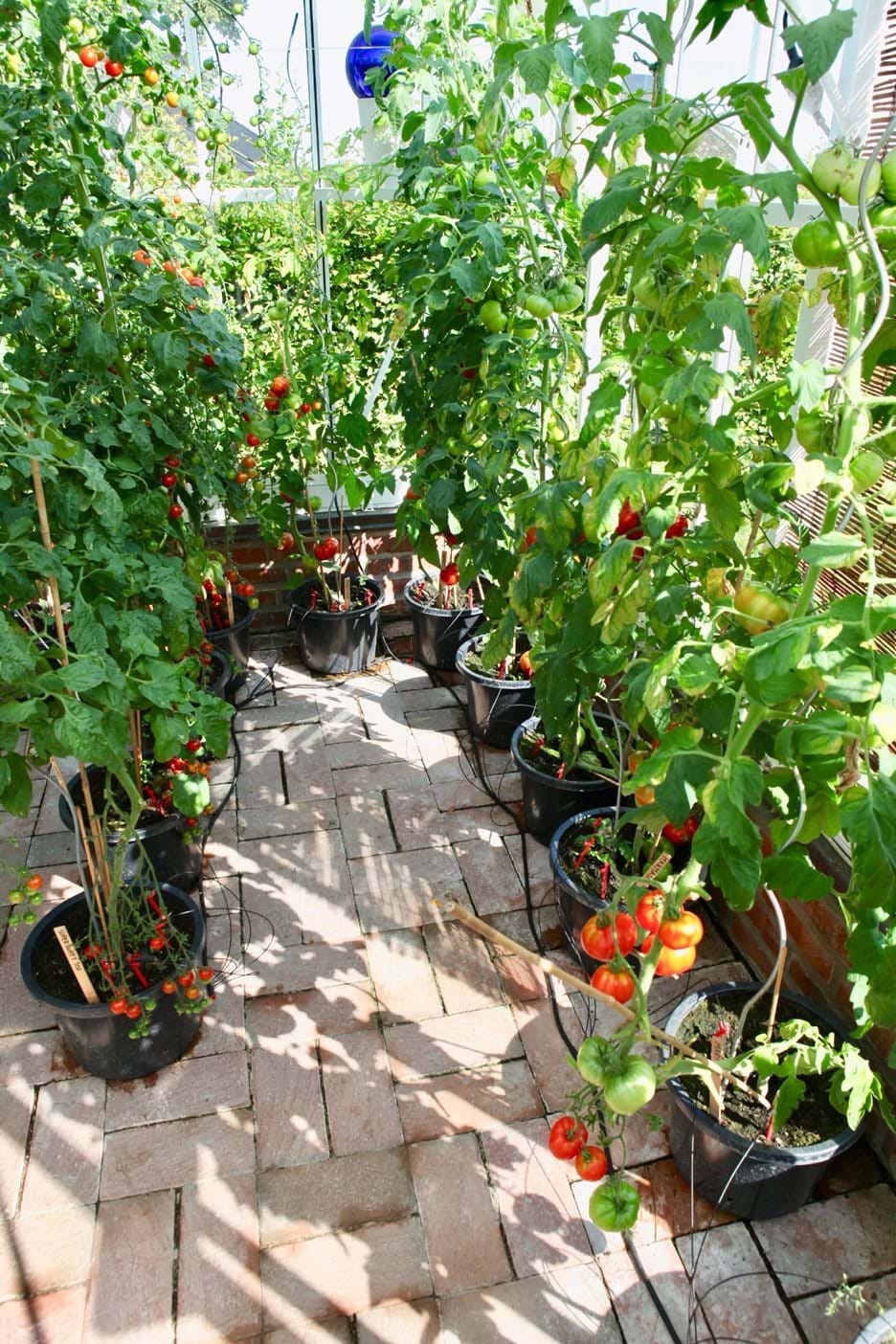 We love cultivating tomatoes. They can be cultivated in buckets, capillary boxes, in beds and in the garden.
Photo: Grøn Kommunikation © 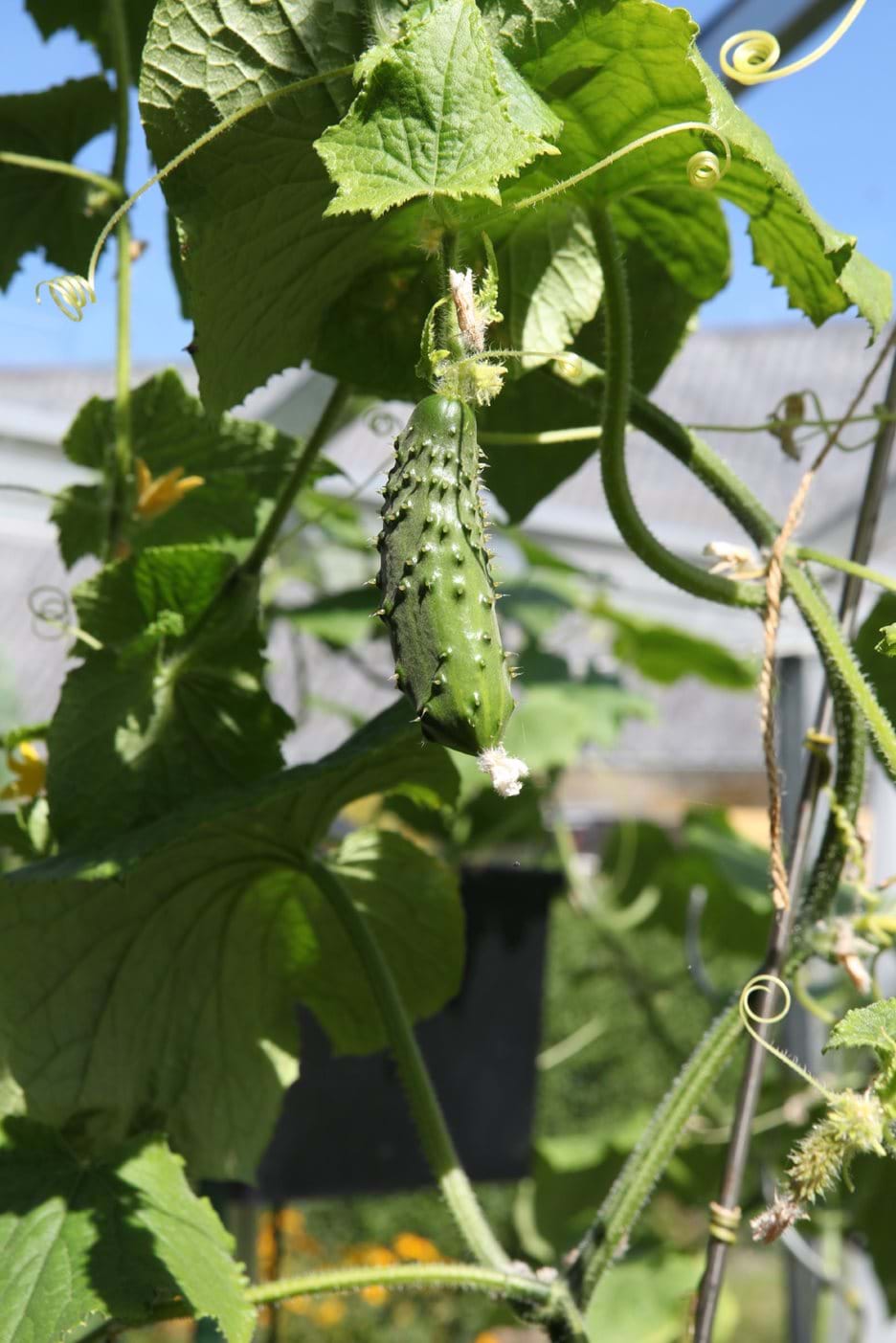 The old cucumber sorts were prickly and grew male flowers. If you cultivate these, you will get a stronger plant, but you may also have to peel your cucumbers before eating them.
Photo: Grøn Kommunikation ©

Cucumbers should be transplanted when the temperature of the soil is at least 18 degrees, preferable 20 degrees, which it typically is in late May or in the beginning of June. Transplanting a cucumber plant too soon, will make the plant lose many small cucumbers in June.

What happens when you transplant too soon, is that the root system simply stops, when it is planted in the cold soil. And once it is in the ground, it can take a while for it to get over the cold shock. Some roots may even die, and since transplanting always in some degree will damage the roots, what is left of them may later be attacked by plant disease such as verticillium wilt when it gets warmer. The disease prevents the transportation of water which results in the plant dying. If the leaves start to droop, it means that there is a problem between the roots and the leaves. So, irrigating the cucumber a lot will not help it, since the root system will be too small making it difficult for the plant to absorb nutrients before they are evaporated from the leaves.

Transplanting is a critical stage. If there is too much sun, the leaves will become limp. Therefore, it is a good idea to protect the plants from the sun or shower the leaves with water. Over-irrigation can also make the leaves start to droop. Also remember to prune. If the small cucumbers start to fall off, nip the cucumber near the stem and do not forget to prune. Another theory, which does not exclude the one before, is that cucumbers have been through a greater processing. For instance the spikes, the bitterness, the curved shape and all the male flowers have been removed. Therefore, buying old sorts are more reliable when it comes to progeny. But keep an eye on the plant, in case it starts to develop male flowers, these must be nipped off before they pollinate the female flowers. If not, the cucumber will grow thick with seeds.

Of course your cucumbers will grow just fine, and if it is your first time cultivating cucumbers, you may be unsure of how to prune. The cucumber is a climbing plant and if you let it, it can fill the entire greenhouse.

How to do it

If you do not nip off the side shoots that grow near the stem, they will not form new side shoots. Instead, you will get one cucumber at every floor. In this case it may be a good idea to nip off the cucumber that is after the third floor. 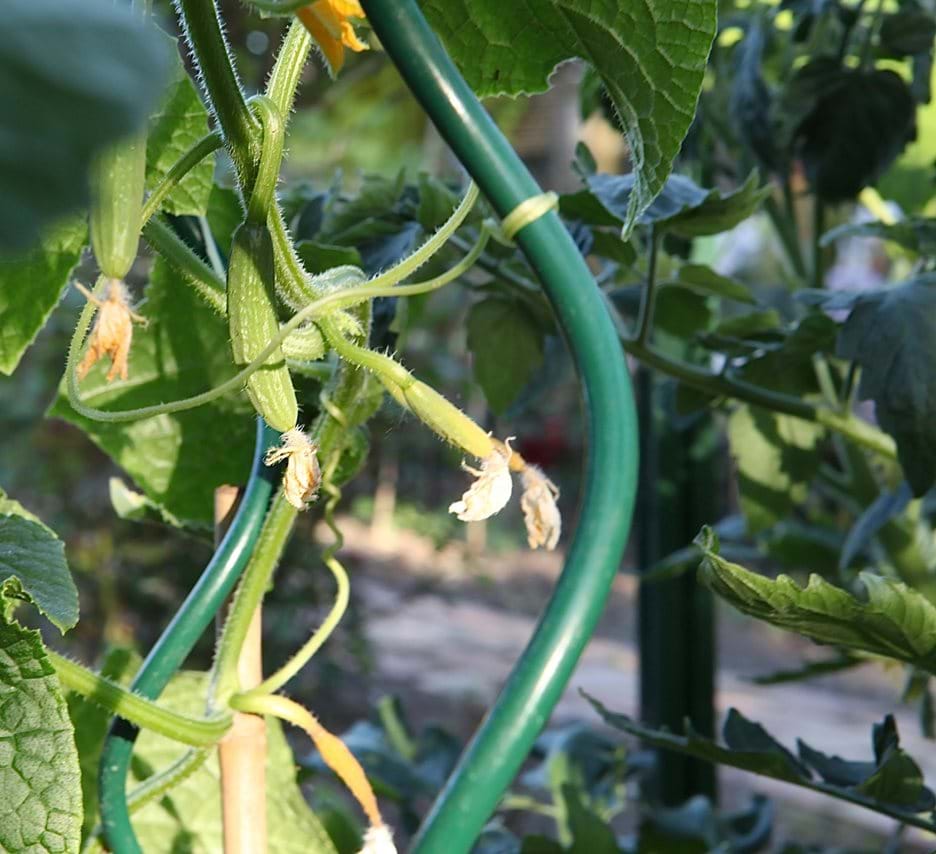 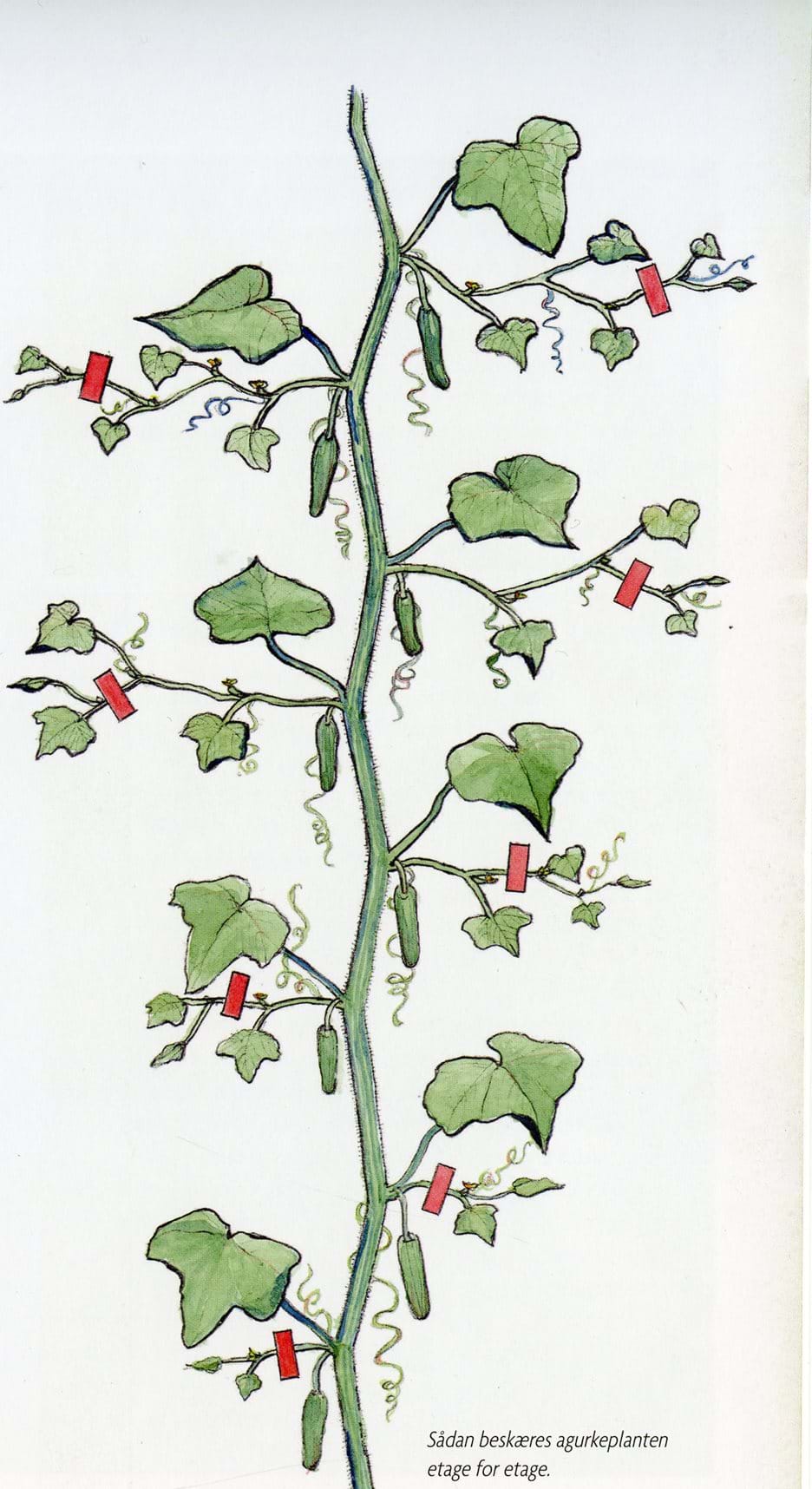 How to prune your cucumber.