Welcome back to the garden of a Juliana employee. 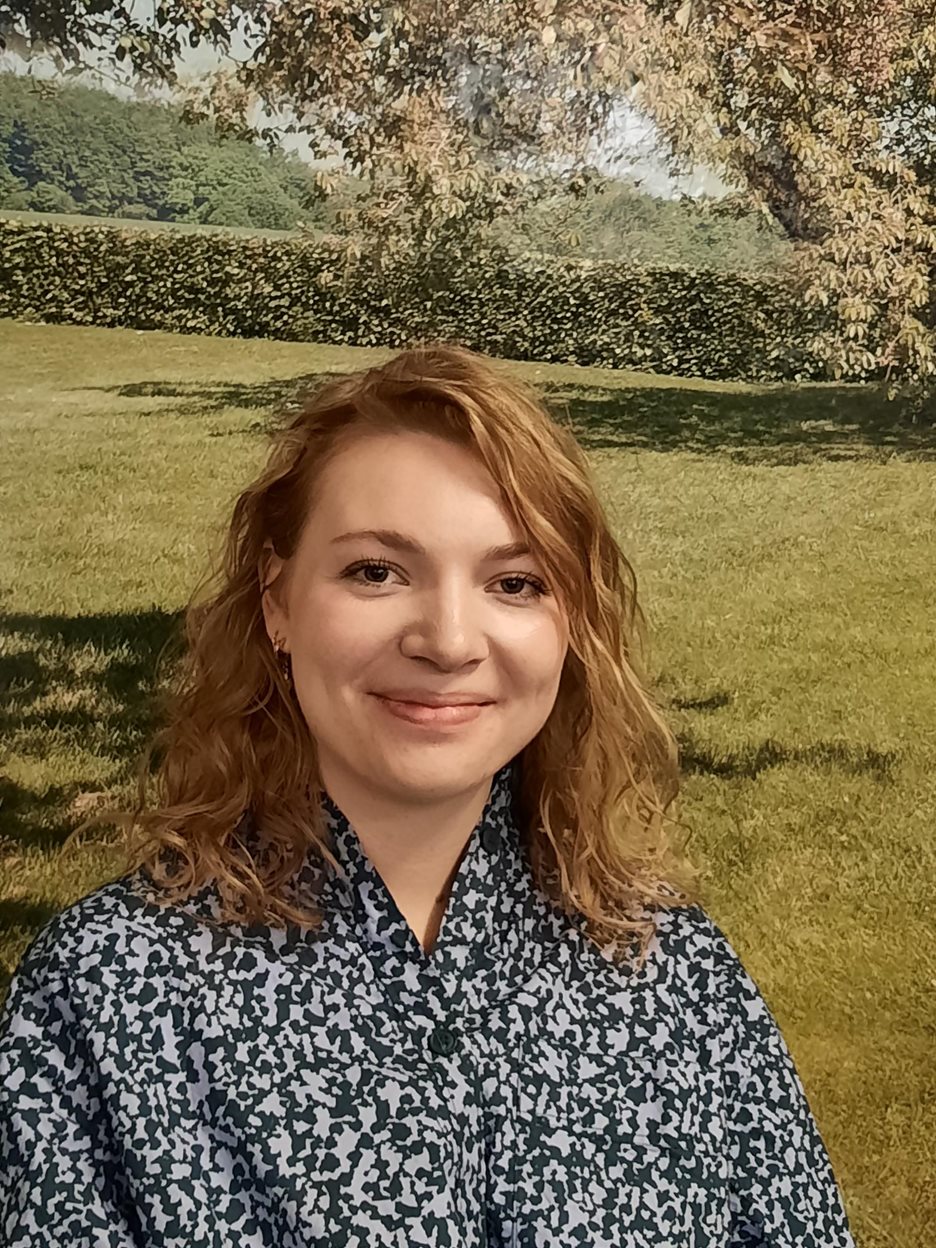 Since May our small garden have turned into a green paradise. Our goal was to create a garden with vegetables and flowers. The flowers are contributing to keeping the insects away from the delicious vegetables and create a beautiful contrast to all the green.

Our terrace and raised beds
The plants in our raised beds are getting along quite well after a very cold May. Many of our plants were slow to grow this year and we had to realize that the quality of soil has a greater influence on the growth than we first anticipated. Luckily, our local recycling centre has a lot of soil, which we placed on the soil we had bought in a hardware store. The soil was improved and the result of the soil can be seen here. 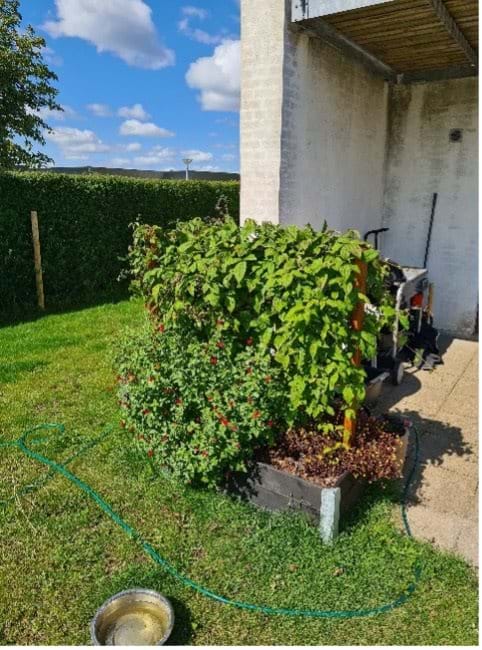 Our Clematis Montana is getting along and is placed together with blackcurrant sage and the clover, and is making one of the corners on our terrace look very nice. 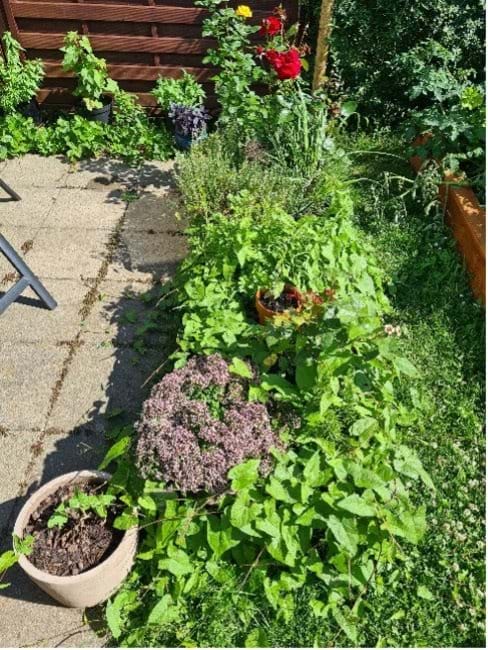 Our raised beds by the terrace are full of delicious herbs, roses and a very large summer phlox. 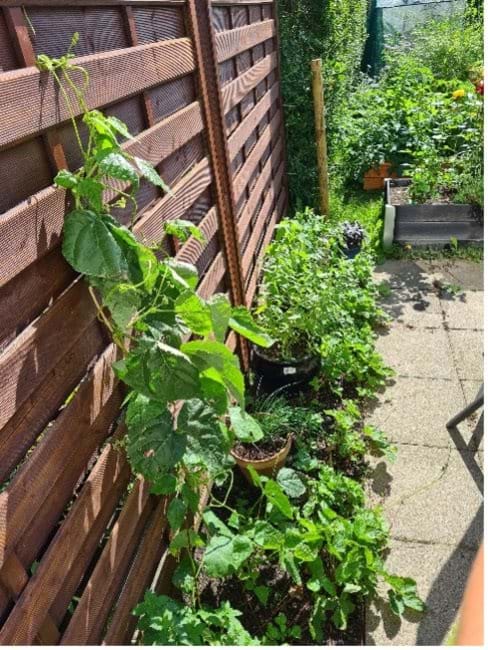 The bed by the fence is full of mints, sages, wild strawberries, herbs and a pretty hortensia, which is hiding in a corner in the shadow.

Our homemade raised beds are flourishing and are providing fresh lettuce, tomatoes, beans, radishes and more to our table. We enjoy the option to go in the garden to harvest and watch bees, butterflies, and other insects enjoy the garden with us. 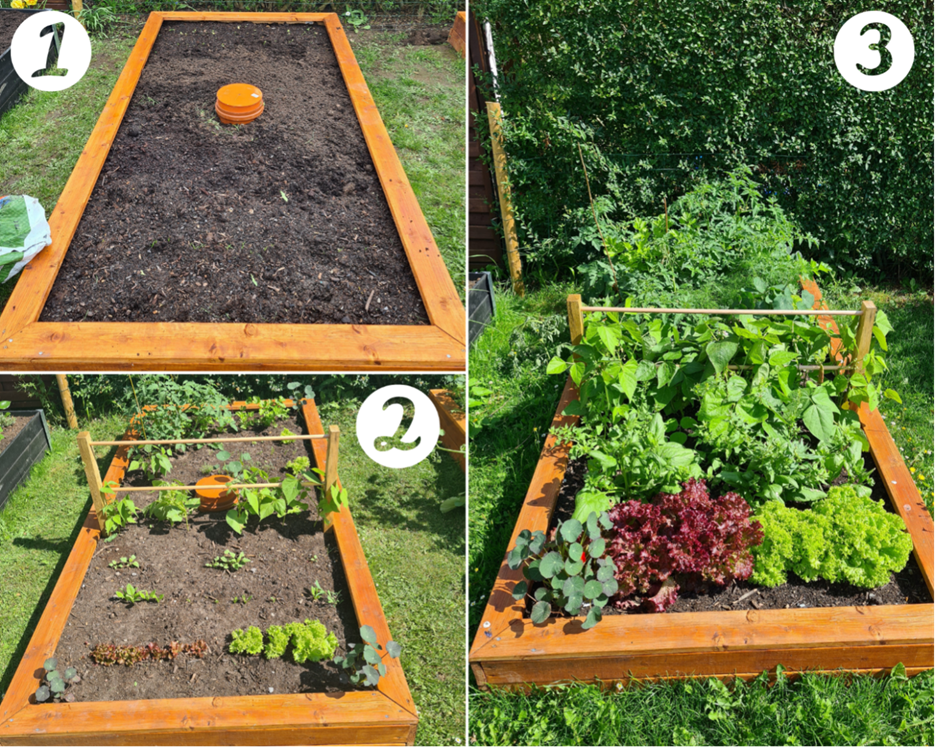 In our first raised bed we have placed an orange object which is our solution to a mini compost. It is a PVC pipe with holes on the sides where small bits of gardening waste can be put in. When the compost has turned into soil then the pipe is pulled up and the compost will be a part of the garden again. Next to the mini compost we have built a rack for the beans to lean on. 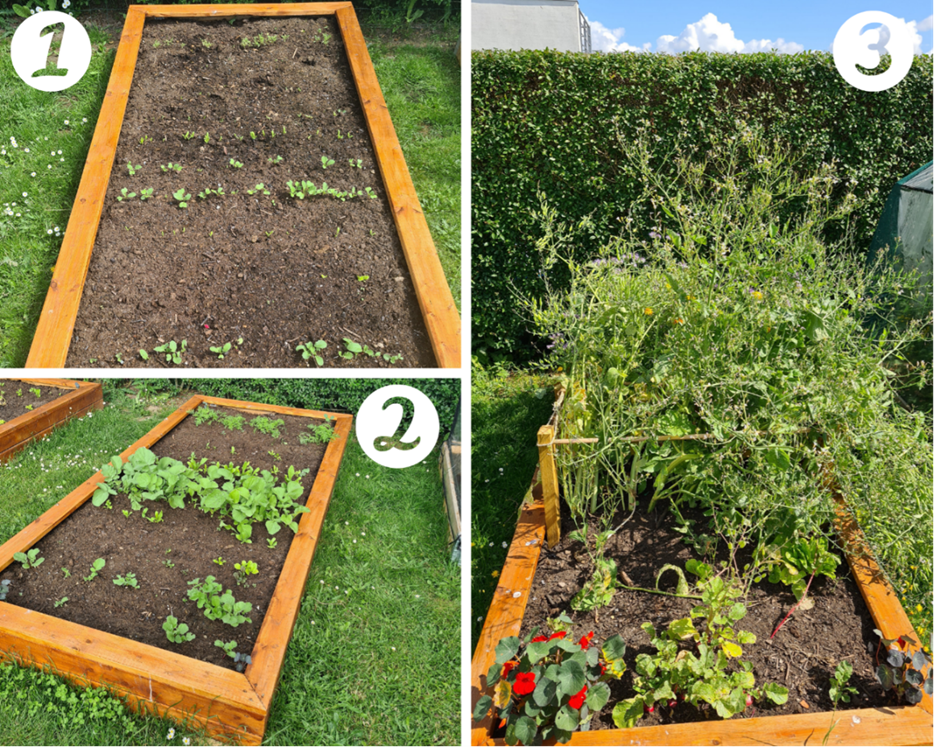 Our second bed took a little longer to set up due to some seeds needed replanting since the weather was not as we expected. Luckily, all the vegetables were growing and some were thriving more than others. The rat-tail radishes grew much bigger than we anticipated, and they spread across the whole bed. 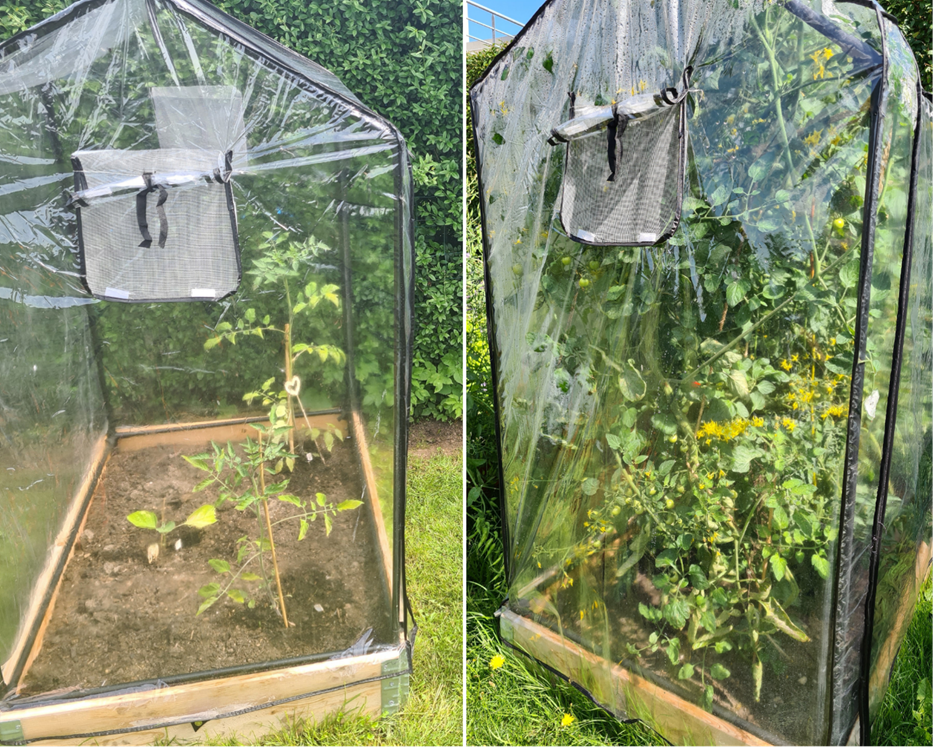 Our experience
After the first few months we had already learned a lot. We followed the advice given by Cristine from Spirekassen.nu and have placed Clematis Montana as a windbreak, monks cress as groundcover, marigolds by the lettuce and phacelia by the kale. Although we concluded that some of the plants (the rat-tail radish) did not get enough space, and therefore some of the other plants did not get enough sunlight which resulted in slow growth. Next year the plants will have more space and only one row will be sown instead of two. At the same time the monks cresses became quite popular among the caterpillars, and therefore some parts of the plant had been devoured. I ended up removing them one by one to avoid that they would reach the kale and spinach beet.

Furthermore, we also got Portuguese slugs, larvae, lice and ants which we continuously were controlling. We chose a natural solution which was to keep all the plants with lice wet and collect the slugs and larvae in a bucket for then to put them in a meadow somewhere else.

Overall, we are pleased with our first year in the garden. Even with the bad weather, the pests and the many times we had to resow we finally succeeded in creating a lovely small garden with vegetables, herbs and flowers.

The upcoming seasons
In the future we have planned to sow vegetable that can be cultivated during winter in the greenhouse and in the raised beds. We plan to have garlic, parsnip, spinach and radishes in the raised beds and keep the cold away by using a crop cover cloth.

We also have a dream of one day to try the ‘no dig method’ which is mentioned a lot in gardening magazines and online forums. We are so lucky to have a garden of 300 m2 for which we can try out this method. In the same garden we have had large crops such as beans, pumpkins, potatoes, kale, cucumbers and much more which we were not able to have while living in our small terraced house.

Check out our Instagram profile to see how our garden has developed since February 2021. Our profile is @greengardening2021