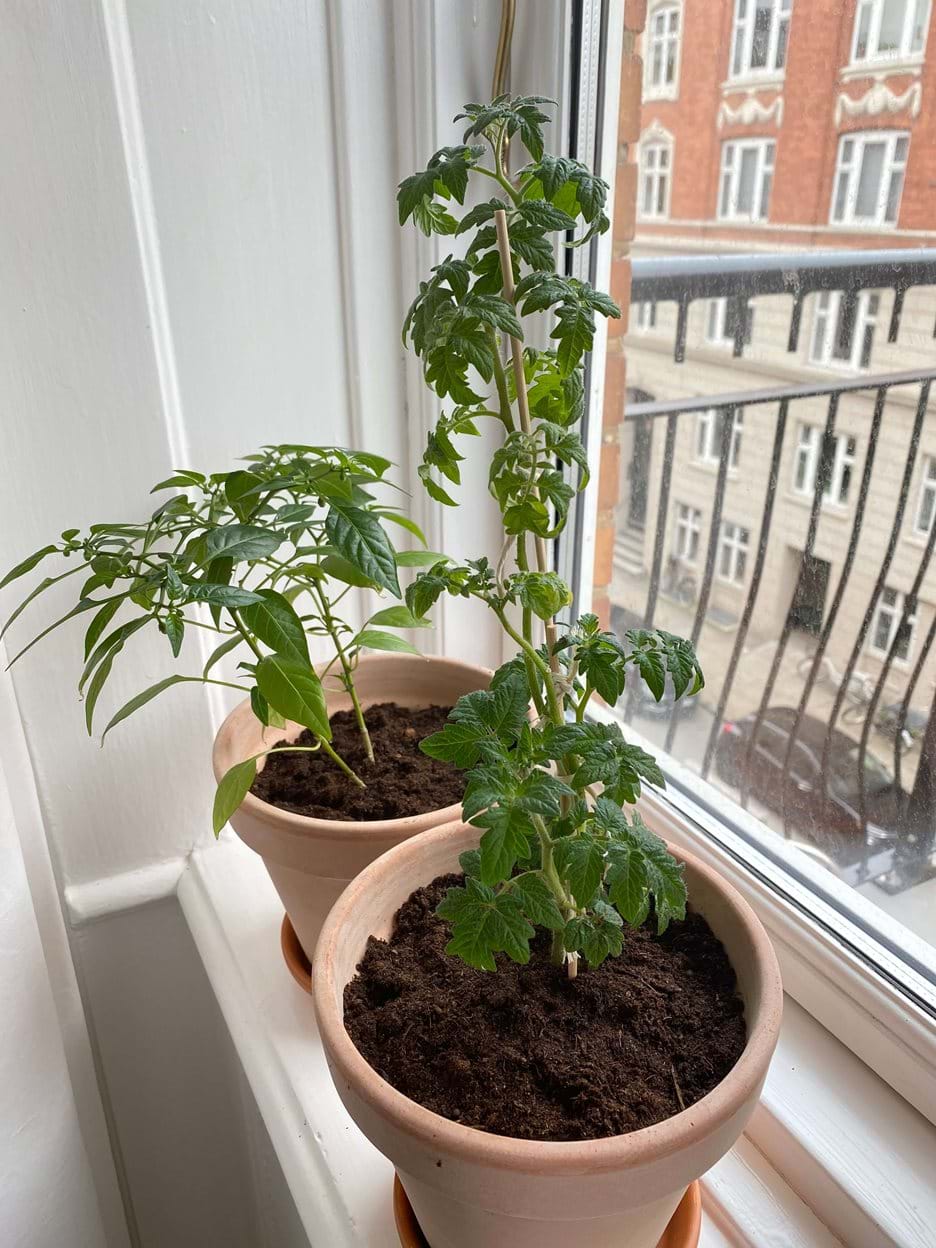 The transplanted chillies and tomatoes should stay in the living room until May and then gradually get used to life outside on the balcony.

I have three tall and thin tomato plants on my windows ledge and two chillies. They were planted in October, but the question is, will they ever bear fruit? The expert is positive - read her advice to me here.

It started as winter cultivation back in September. A small winter cultivation kit came in the mail, with chillies and dwarf tomatoes. With expert guidance from Christine Wiemann, owner of the danish seed company Spirekassen, I started sowing, and after a few weeks they sprouted. While the perpetual spinach did not survive, both tomatoes and chillies were looking optimistic, and the hope was that I could harvest new tomatoes in January.

Now we are in late March and there has been no hint of fruits on either the tomatoes or chilli. Instead, I have some long and tall teenage tomatoes standing on my window ledge. Honestly, I probably have not given them enough growth light (which Christine had told me was important) - but I have irrigated and fertilized, but obviously not enough for me to harvest anything.

Now the question is what to do with my tall and thin tomatoes and chillies. Will they ever bear fruit, or should I give up? 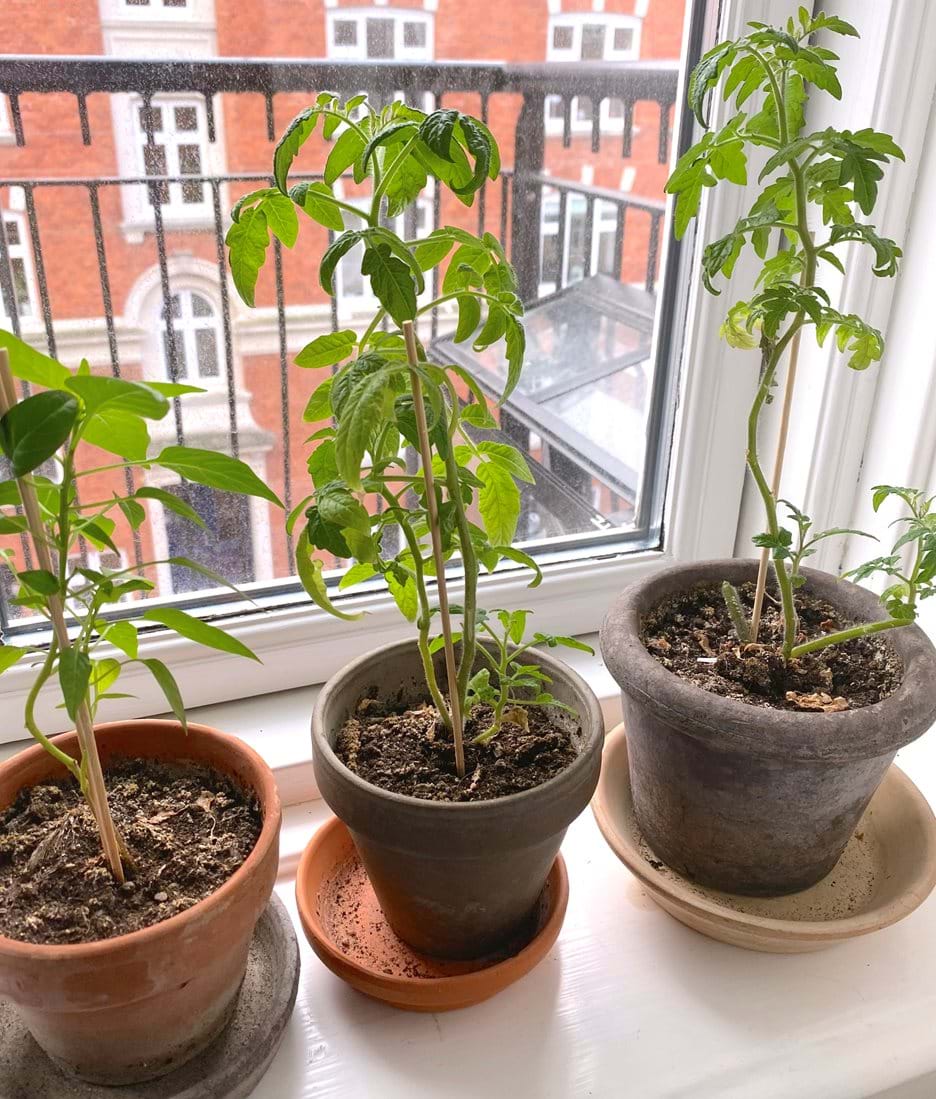 Both chillies and dwarf tomatoes are growing, but the tomatoes are especially tall and thin, probably because they have not gotten enough light. Light deficit makes plants stretch for the light, and you will end up with a very long stem.

On the other hand, it seems very harsh to throw out plants simply because they do not bear fruit as expected and the plants themselves look fine.

I called Christine from Spirekassen to get expert advice on what to do.

Fortunately, she was full of optimism and the message was quite clear not to throw them out. They can easily bear fruit. But it requires a transplant to larger pots - both tomatoes and chillies. So, I went to a nursery and shopped for my next step in the winter cultivation that has now become a spring project. 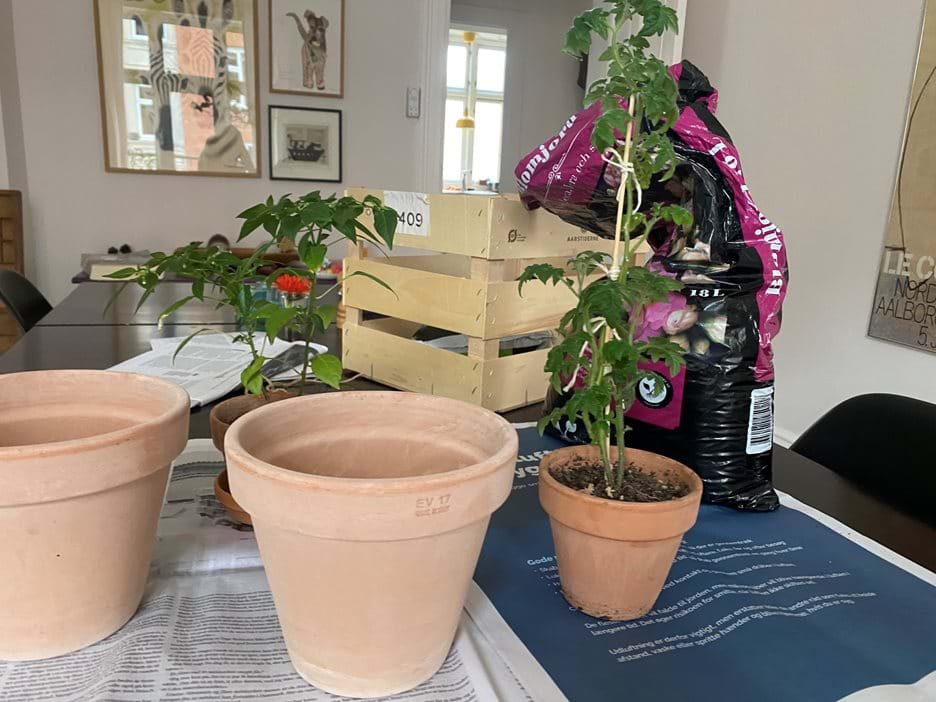 I bought larger and deeper pots and transplanted them in regular potting soil.

Pots – approx. 6-8 inches high - I use terracotta pots, but other pots are also fine. Remember there must be a hole in the bottom for drainage.

Potting soil - use good potting soil - preferably one that has been fertilized, as the plants at this stage need a lot of nutrition.

I plant in terracotta pots, and they do not hold moisture as well as, for example, a glazed pot does. Therefore, the recommendation from Christine is to buy a potting soil that contains clay, as clay holds moisture.

Tomato plants, unlike other plants, tolerate a larger part of the stem being covered by soil. This will allow the plant to take root from the part of the stem that is underground, and thus the plant will grow stronger. Also, a part of the tall stem will be buried, so the plant is not as long. 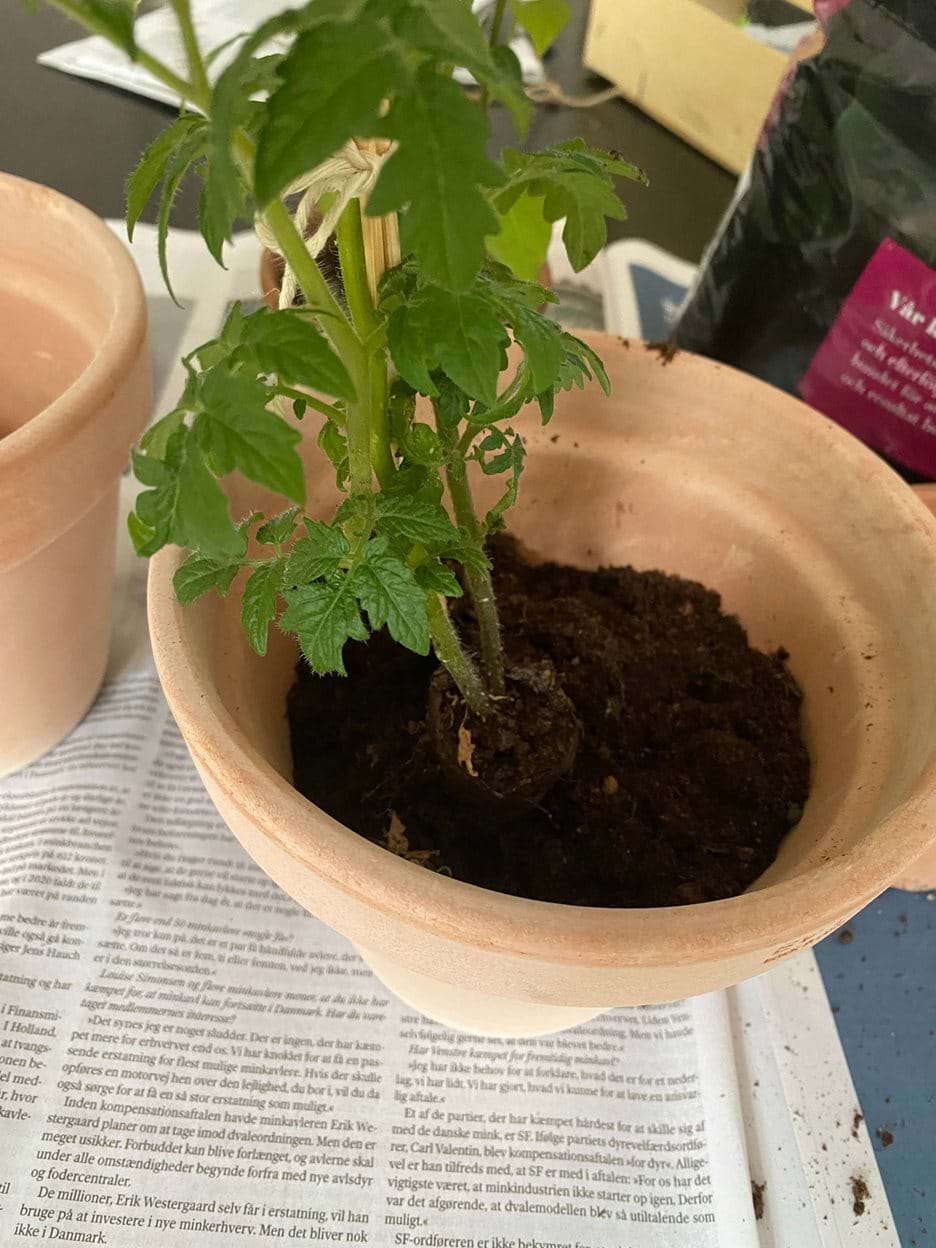 I put the tomato plants deep into the new pots so that the new soil covered a large part of the stem.

From indoor to outdoor plants

Once the tomatoes are transplanted, I should leave them on my window ledge until May. They must not be put outside while it is still cold and there is a risk of frost. They can also get sunburned if they are put outside in intense sunlight from one day to another. The recommendation is therefore that I should give them a smooth transition and harden them.

I have a balcony with a small balcony greenhouse, and Christine recommends that by May when the sun starts to warm more, I should put them outside in the greenhouse for a few hours at a time for a week or two before they are moved outside permanently.

If there is fertilizer in the potting soil I buy, I have to wait about four weeks to fertilize the plants. Then I have to add fertilizer to the water approx. once a week.

In my case, Christine recommends that I irrigate with tap water as it contains the lime that rainwater lacks. Lack of lime can, among other things, lead to diseases in the tomato such as tomato leaf curl. But rainwater is obvious to use, so if you have a rainwater but, use it, but remember to supplement with tap water. For example, you can mix rainwater with tap water one-to-one, and thus get the best of both worlds. 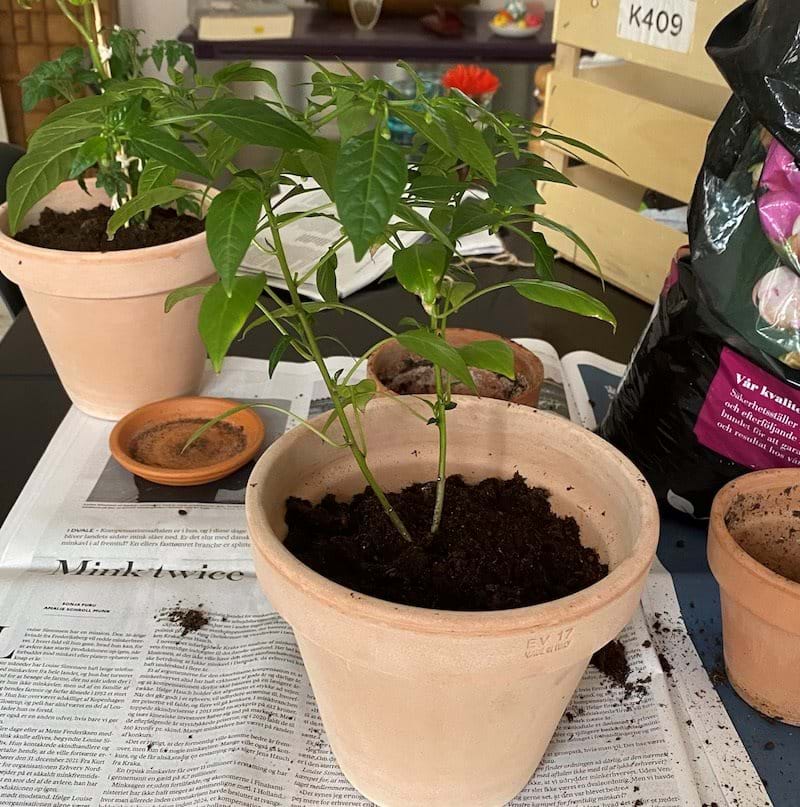 Chillies should not be transplanted deeper than it was in the small pot, but it still benefits from getting new soil and more space.

Chilli should be transplanted, but not deeper than before

In relation to my two chilli plants, which are spreading their fine green leaves, I also have to transplant them into new, slightly larger pots and in good soil.

But they should not go deeper into the ground.

A little longer in the living room

Chilli is a little more delicate in terms of being outside than the tomatoes. Christine recommends that I wait to put them outside in the greenhouse until the end of May. 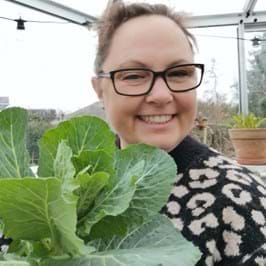 Christine Wiemann is the owner of Spirekassen, which sells organic seeds.