Now it's March and that means the greenhouse can get quite hot. Long before the greenhouse for small gardens was invented, the garden frame was invented. A garden frame is a bed with manure, but today it does not have to be manure. However, it is quite interesting that the cultivation method with manure beds is still used, and especially the wise young women's sense of gardening and their idea of going back to nature, the garden frame has spread in the small kitchen gardens, and even on small balconies. 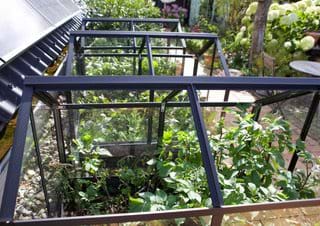 Garden frames with animal manure, mainly from donkeys, horses, and mules, are known to have been used in Moorish Spain from the 10th century. They served as buried beds, where a hole was dug at a depth of 20 inches and about a few feet in length and width. Manure was then put in here. The wise farmers had found out that a good 20 inches were what was needed to start the composting process that develops heat. 8 inches of soil was then laid on top. The seeds were sown and covered with a thin blanket of cabbage leaves to keep warm. It was way later that glass was thought of.

In the 14th century, researcher Pietro dé Crescenzi wrote a textbook in agriculture, which of course included the use of garden frames. The book was translated into many languages, and in Northern Europe, the idea was welcomed with open arms. The French developed the manure bed into raised beds with sides of straw mats that kept the heat. It was also the French who began experimenting with covering the plants with glass. It started with cloches that were mainly put over cucumbers and melons and later came glass panes over the garden frames. Cloches are still popular to this day.

Grow all year round

The garden frame can be used all year round, not just in spring. The temperature in the frame quickly gets between 10 and 15 degrees higher than outside, and when it gets too hot, you just lift the glass lid or take it off completely.

In February or March, you can calmly sow the first vegetables. Many of our vegetables just need a soil temperature of 5 degrees to germinate. You can, for example, now sow radishes, rocket, lettuce, and spinach. When the soil temperature is up to 8 degrees, you can sow carrots and beets. Beans should be sown when the soil temperature is at least 14 degrees. In the garden frame that usually happens three weeks before outside. Once you have harvested your early vegetables, you can continue to grow the same sorts again or grow tomatoes, melons, and cucumbers in the garden frame. Try with cucumbers. Snip off the main shoot after 4-5 leaves, then side shoots will form and spread out on the ground.

In the fall, you can once again extend the season with the vegetables you started within early spring.

In winter, the garden frame is good for keeping so much heat that lettuce can overwinter, or broccoli and pointed cabbage that were sown in September, yes even peas sown in November will be able to survive and grow.

The advantage of the garden frame, and not least with a heating bed, is that the ground is not as cold as the ground outside, but just as important is that it is neither cold nor wet. Many small budding seeds will be destroyed by that. If you grow in the heating bed, you will quickly reach an ideal temperature. Even though you can sow cabbage at 5 to 10 degrees, they will emerge faster at 18 degrees, but just wait, the soil will quickly reach that temperature. 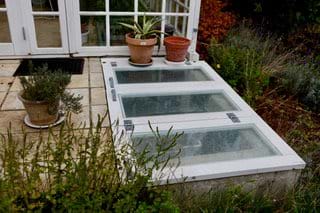 The garden frame can be integrated in the terrace. Maybe it is just used for herbs. 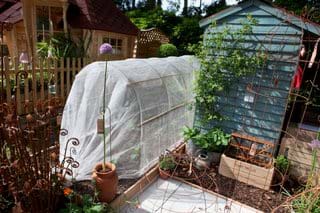 Another kind of garden frame is to put up iron arcs and cover them with plastic or an insect net. Both will result in higher temperatures, but plastic is better. 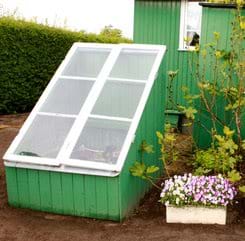 Garden frames do not need to be plane; you can build them tall too. 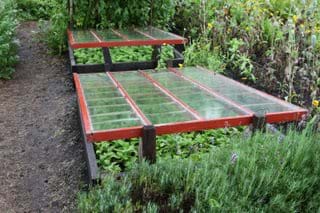 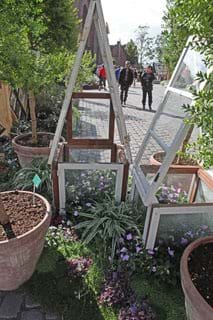 Use your imagination. Here are two garden frames with roofs made from old windows.

You can build your garden frame in many ways. The first garden frame I had was built of small bales of straw and two old windows. The height is not so crucial, because often you take the lid off when the vegetables grow in height, and then there is plenty of space. If you want to make a heating bed, you must either dig about 20 inches into the ground, or the sides must be so high that there is room. Too high sides shield from the sun. The best location is where as much sun as possible is lured in the box. You get this by placing the sloping lid with glass to the south or west. When the glass is slanted, the sunlight enters the box more directly and the rainwater can run away from the wooden frames. If it stands against a wall, the wall will be able to retain heat. It will, too, if you build it with bricks.

An actual heating bed is made as mentioned in the article or with a layer upon layer bed of soil and horse manure. Dig away about half a meter of soil. Fill with 10 inches horse manure, 4 inches soil, 4 inches manure and finally 4 inches soil. The horse manure provides warmth and later nourishment to the potatoes.

Other ways to provide heat

Cabbage, beets, and potatoes are great to grow in straw bales. However, the bale must first be irrigated with up to 150 litres of water and then fertilized. NPK fertilizer, or what we used to call artificial fertilizer works the fastest. I use organic farmer fertilizer. Six litres in a bucket of water are stirred around and distributed on 8 bales.

The straws should face upwards like straws. Once you have irrigated and fertilized, the temperature rises and after 3 weeks it drops to 30 degrees. The potatoes are planted in a hole, from where they will grow. When they are ready for harvest, you just stick your hand into the straw, after which you pick up clean and beautiful potatoes. 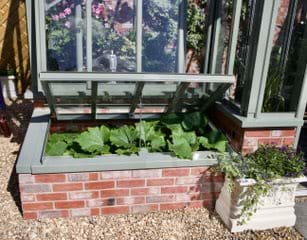 A garden frame against the house wall provides extra heat during the night as the wall give off its heat. 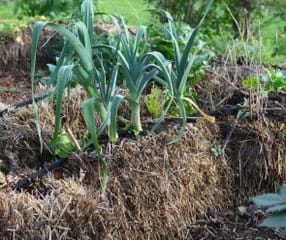 You can also get heat by growing your vegetables in a bale of straw. 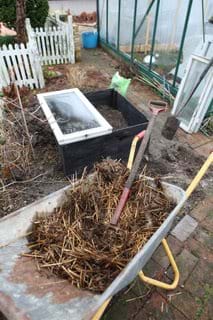 Riding schools have a lot of horse manure. Grab a sack and go to the nearest riding schools to fill up your garden frame. 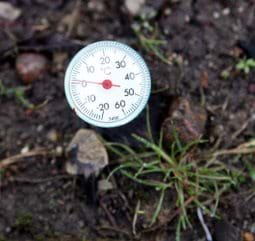 It is an advantage to have an soil thermometer that can measure the temperature before you sow. Small mini greenhouses on pallets are also great garden frames. 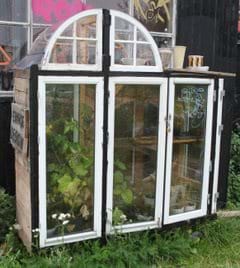 Look for recycled materials for your garden frame. 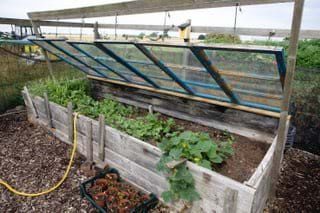 Sometimes it is the window that determines how big your garden frame will be.

Bonfire dinner in the garden