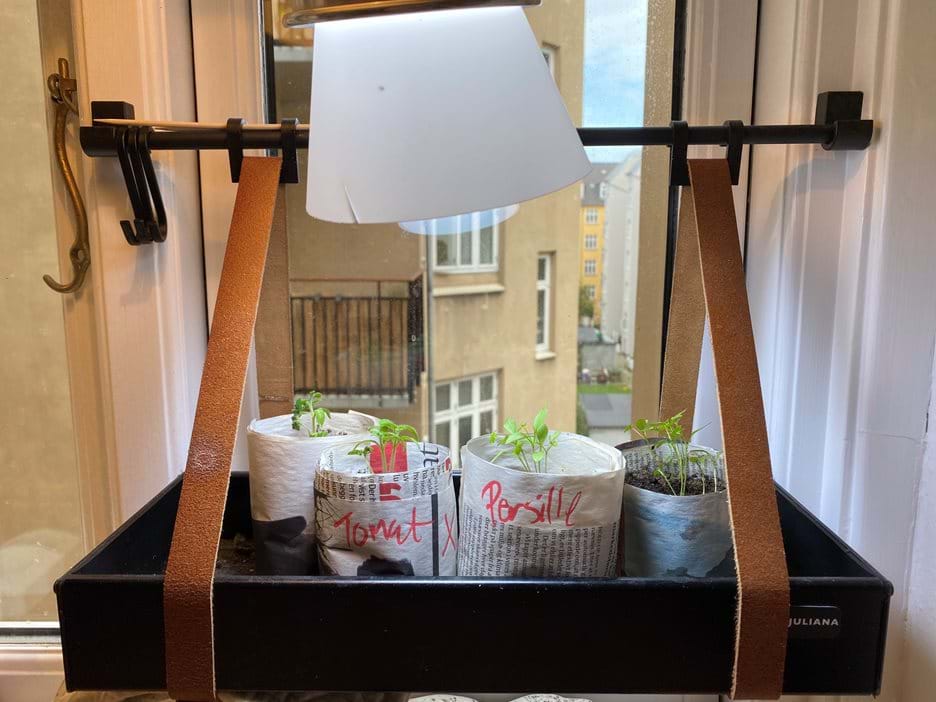 You can easily grow in your window ledge during the dark months - as long as you provide extra light in the form of, for example, LED light.

Winter cultivation is a fun discipline, but just as I got really excited to see small green sprouts peeping out of my window ledge, someone told me I was stressing my plants. Now I have been given a lesson in winter cultivation do’s and don’ts.

I feel like a success and it has actually been a long time since I did that. But the thing is, just a few weeks after I started sowing my winter crops, small fine green sprouts with even finer, small green leaves emerged. For a city dweller, that is close to a miracle.

High on adrenaline, I thought my plants (tomato, chilli, parsley and spinach) would love to have a little more space and a pot, so I started transplanting them from the peat briquettes I had sown the seeds in into home-rolled newspaper pots with added succulent and cactus soil. In the nursery, a sweet salesclerk had looked at me wonderingly when I asked for potting soil - as it was out of season. But she said that new plants need nutrient-poor soil, and then succulent and cactus soil are the best alternatives.

Oops! Tomatoes should not be outside on the balcony

One of the following days after I had transplanted, the September sun shone warmly and nicely directly down on my balcony, and I thought my little sprouts would love it. Fresh air and warm sun. So, I put them outside - just for a few hours.

I seriously felt that the little creatures strut gratefully up towards the sun, sending me a grateful greeting. But I'm obviously not in a position to read plants. Because when I showed the sprouts, I promptly got the response: "Oh no - tomatoes and chillies should not be outside right now." 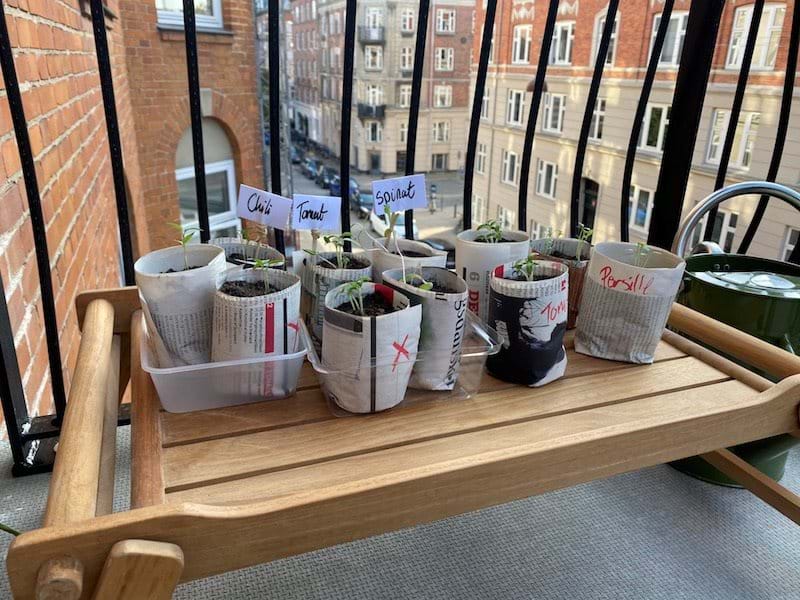 Even though it is a warm September day, tomatoes and chillies should not be outside. Though parsley and spinach should actually be cultivated outside in the autumn/winter.

Growing vegetables has no fixed formula. It is more about understanding the plant's signals and language.

"You stress your plants"
After a long conversation, it was clear that I should probably lower my commitment a bit. "You stress them out by doing what you do" I was told.

"The rule of thumb is that you should not plant out until the small sprouts have broad leaves (adult leaves)”.

I do not know what a broad leaf looks like, but it should be leaves with 'nicks' in them - so they look like real leaves and not the small cotyledons that are completely straight and fine on the edge. 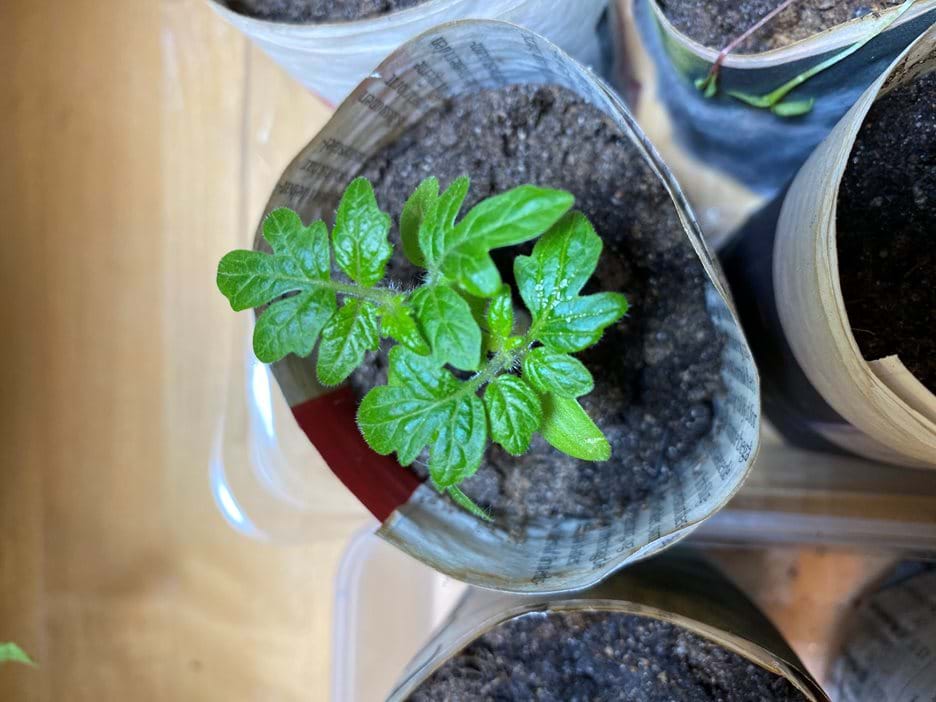 Broad leaves – or rather adult leaves on a tomato. 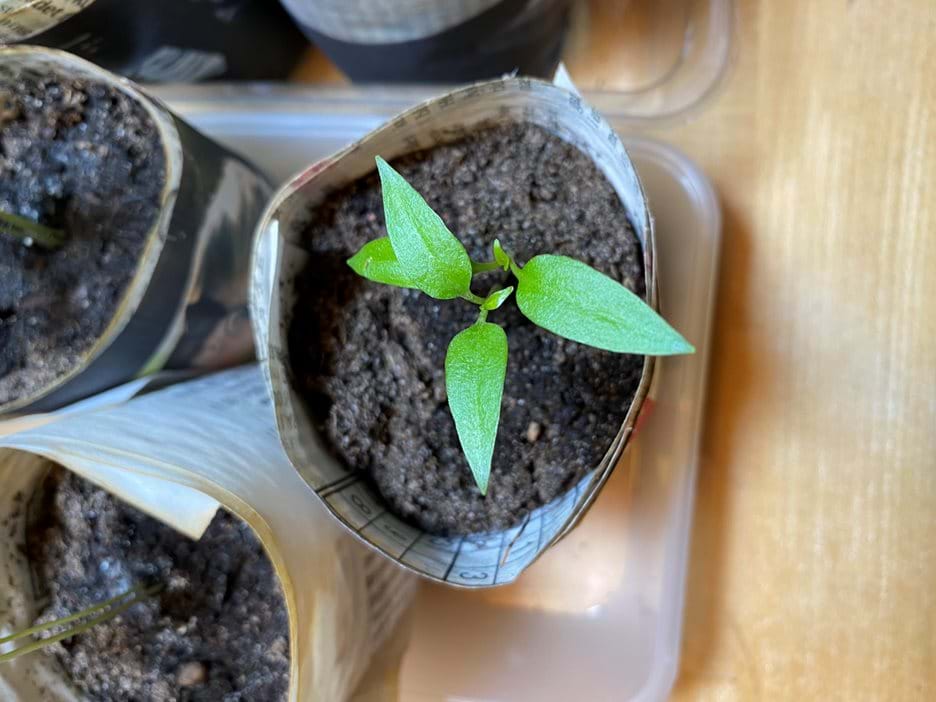 Cotyledons on a chilli.

When it comes to using newspaper pots, experts say that even though they look cute, they do have a couple of downsides.The newspaper absorbs a lot of water, which evaporates before the plants have time to enjoy it. Thus, the plants simply use too much energy on stressing over the lack of water to maintain the moist and temperature regulation. Also, newspapers are full of ink. You can reduce evaporation by placing the pots tightly so that they retain more moisture

Just be aware that plants placed too close will often stretch too much (grow too long stems) to get free from each other and get air, which will result in a poorer plant in the end.

I am confused on a higher level, but I have also become aware that there are no definitive answers. Growing vegetables has no fixed formula. It is more about understanding the plant's signals and language.

Artificial light half the time of the day

I have much to learn. After seeing my plants, the verdict is that they have stretched a bit (even without standing close).They have received too much heat and too little light.

I cautiously tried to put them in a west window where there is more sun, and I got a thumb up for that. So now they have a place in the bedroom - and I do not have to worry about whether they should be nursed at night, as plants would rather sleep eight hours a day. In other words - we sleep through.

Expert feedback to my approach

Expert comment: You give the tomatoes plenty of light and transplant them in plastic pots with a hole in the bottom (regular potting soil) when they are ready - preferably 12 inches in diameter - then you can also start irrigating from below (but also irrigate from above) After a few weeks in the new potting soil, it is a good idea to give the plants liquid fertilizer once a week. And then you wait in patience and let them grow quietly. If all goes well, you have enough tomatoes for January. With chilli, the workflow is the same. Your parsley and spinach should be grown outside, so put them out on the balcony. Line them up by the house wall where they will be sheltered.

Enjoy the greenhouse during winter