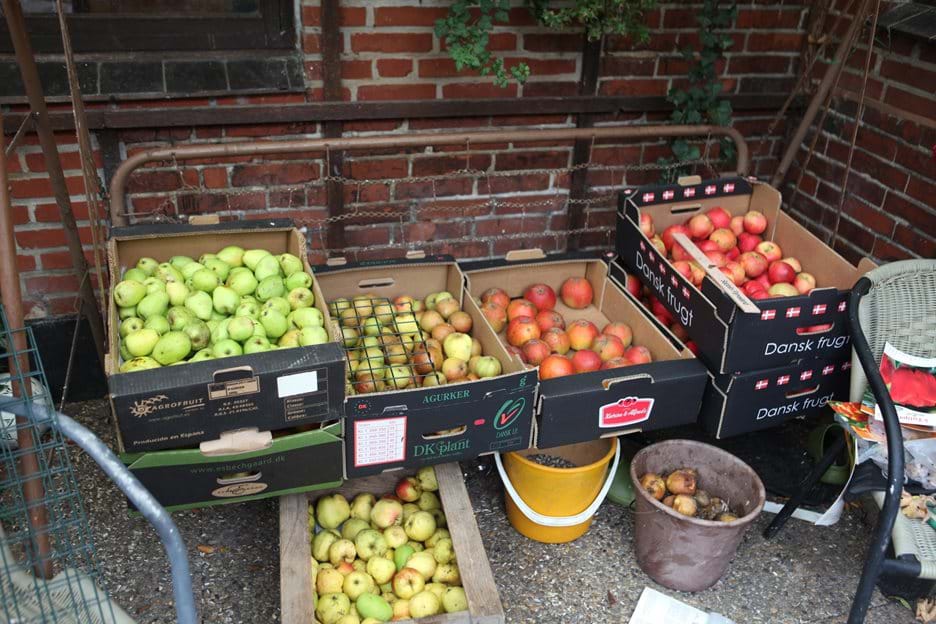 Apples are being picked and put in boxes. 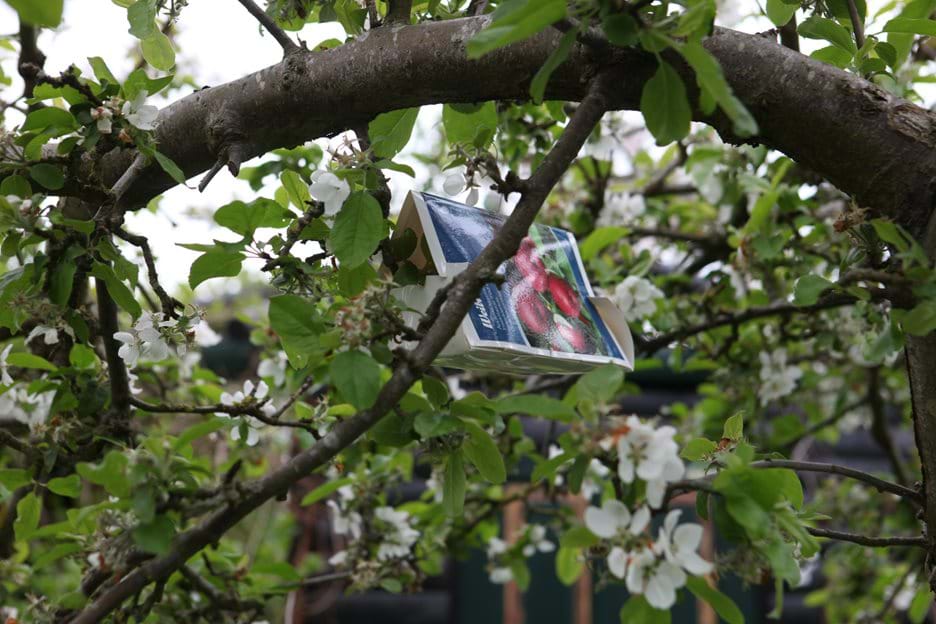 The pheromone traps are used to notify the fruit grower if there are any codling moths in the air, as the pesticide then needs to be used. In the garden, they catch a lot of males, which can reduce the number of apples that get infested with worms. 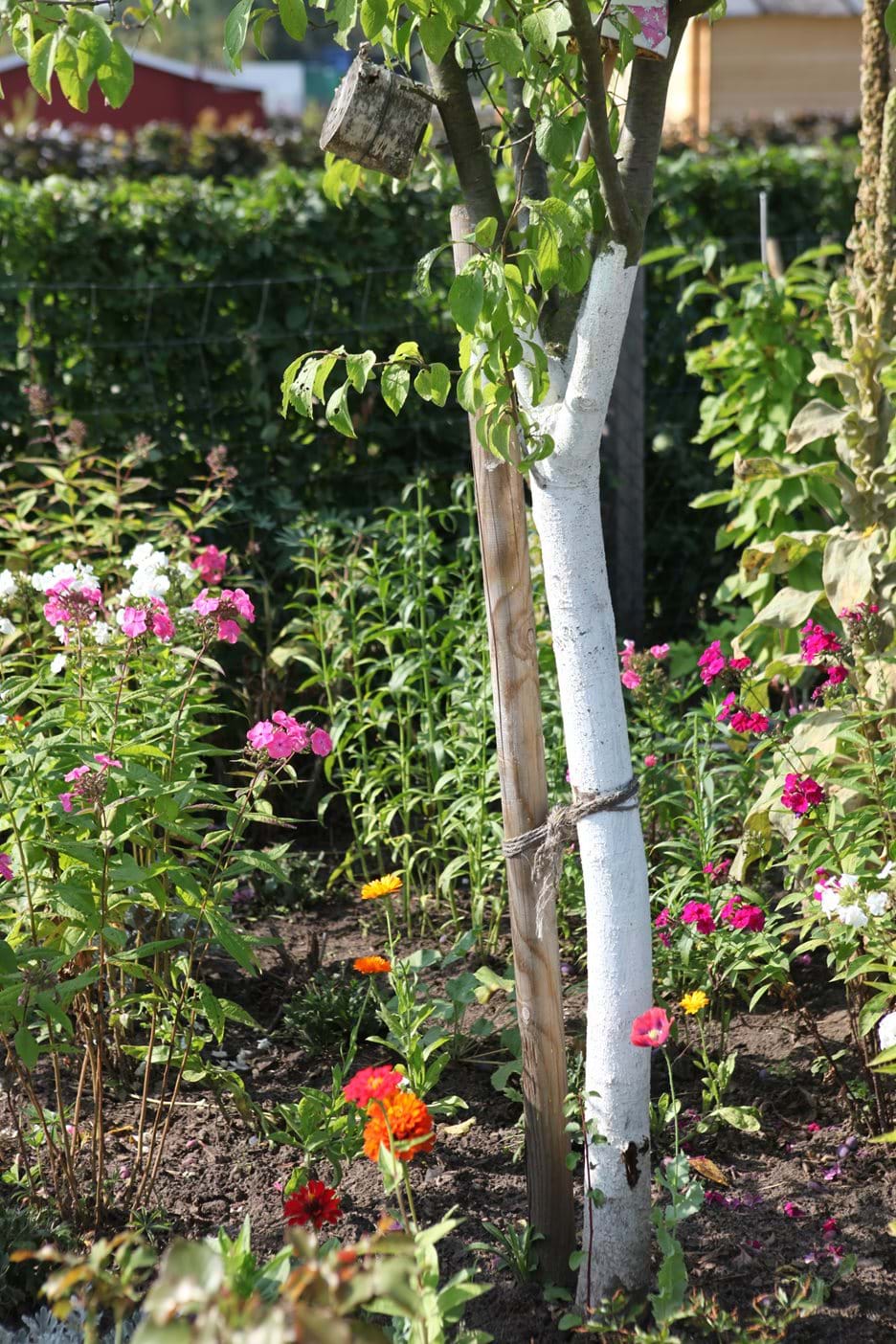 Lime coating on trees is an old method that partly ensures that larvae hiding in cracks are killed, but it also ensures that the bark of the tree does not crack. Cracks occur during late winter when frost bites and the sun heats the trunk of the tree. 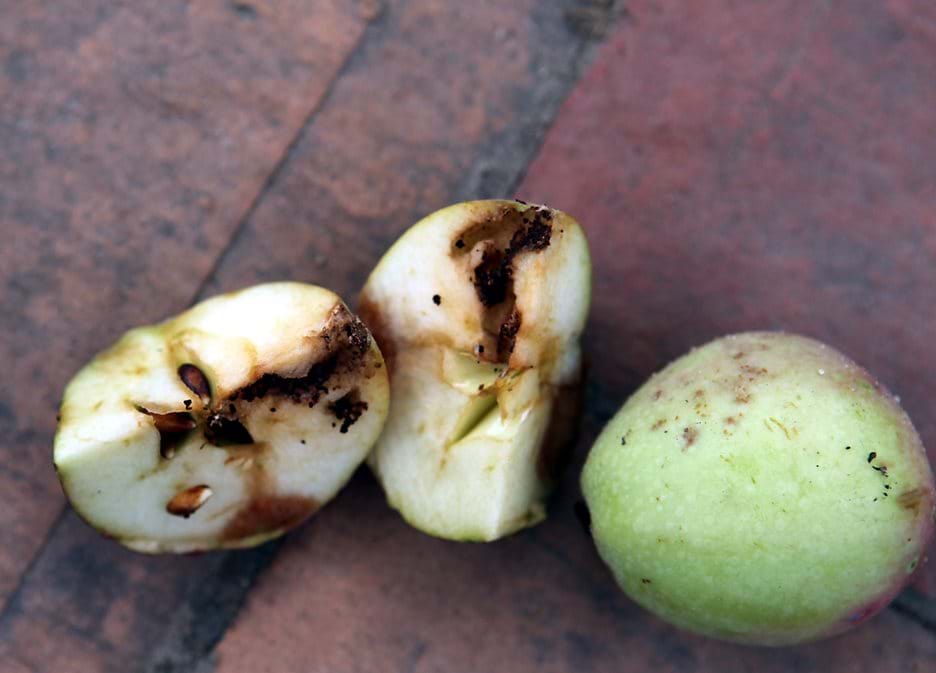 Apples infested with worms are so annoying, but there is a lot of food for them in an apple.

Throughout the spring and summer, we have been looking forward to seeing the apples grow. First, they are very small, then they get bigger and change colour, depending on the sort and sun. When they have to be picked, the fright comes. There are holes in the apples and parts of the apple do not taste good. The question is whether there is anything to do about it.

Larvae in apples are caused by a small moth called the codling moth. When we discover the damage, it is too late to do anything. There are no remedies, but you should remove all windfall apples as soon as they fall. Shake the tree in mid-summer so that the infested apples fall. You need to remove the apples that have worms before they crawl out of the apple.

In Germany, it is common to lime coat branches and stems with whitewash. Remember to get into all the cracks. You can do it now and in the fall. The lime kills larvae, pupae and eggs.

Lime can be bought in a hardware store. Stir it well with 5 parts of water and leave it for 24 hours. Then you paint the stems with a brush of natural hair. Artificial brushes will be ruined. There are no specific rules for how far you have to go. Some even paint the branches, but often it is far up the stem and where there are cracks you need to whitewash.

Another known method is to put a piece of corrugated cardboard around the stem when the flowering starts. When the larvae crawl down the stem, they hide in the corrugated cardboard, which is then removed and burned in late summer. It might snatch a few larvae.

There is also something called pheromone traps. They catch the males so they cannot impregnate the females. The traps need to be set up before the flowering in May, and a single trap is enough but catches far from all males so you will only reduce the number. Actually, the traps are more intended for fruit growers to indicate when it is reasonable to use pesticides, but they certainly have an effect in the garden.

They come from the neighbour

Then there are all the neighbours. If they do not do the same as you, then unfortunately it can be almost as hopeless as getting rid of Spanish slugs. But still, try one or more of the methods. Also remember titmouse boxes, more titmouse boxes and lots of titmouse boxes. Finally, certain apple trees largely do not get attacked. The early sorts are more exposed, while the late ones are rarely attacked.

It is not alone

Furthermore, there is also another pest attacking apples. It's the oak apple gall wasp. The oak apple gall wasp appears just when the flowers come out and it lays eggs in the flower. When the small apples are formed, the larva hatches and will gnaw a little in all small apples so they fall. You can use a white sticky plate that cheats the females. They think it is a large flower and then land on the white sticky plate. 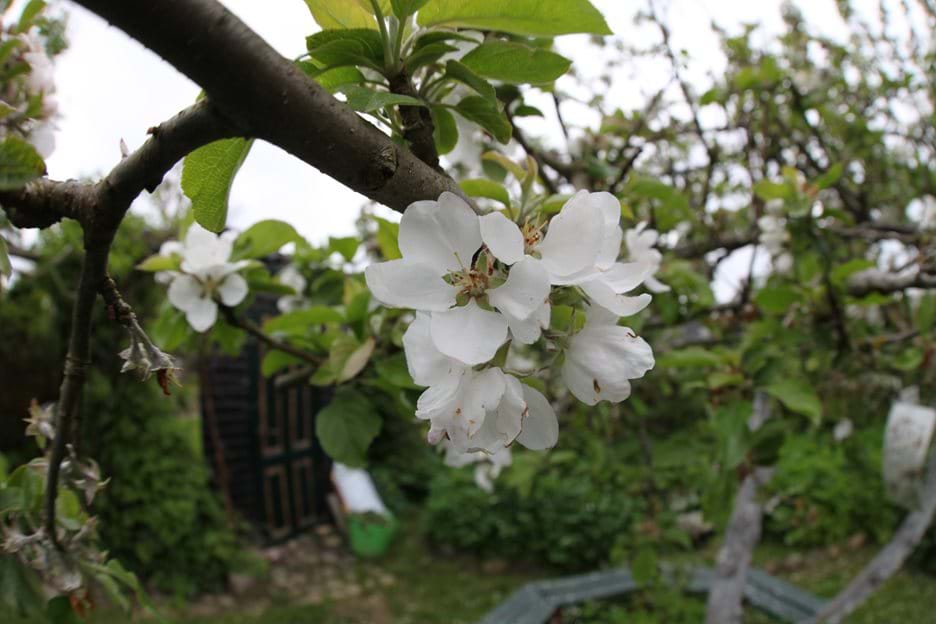 When the tree is in bloom, you need to be extra alert. 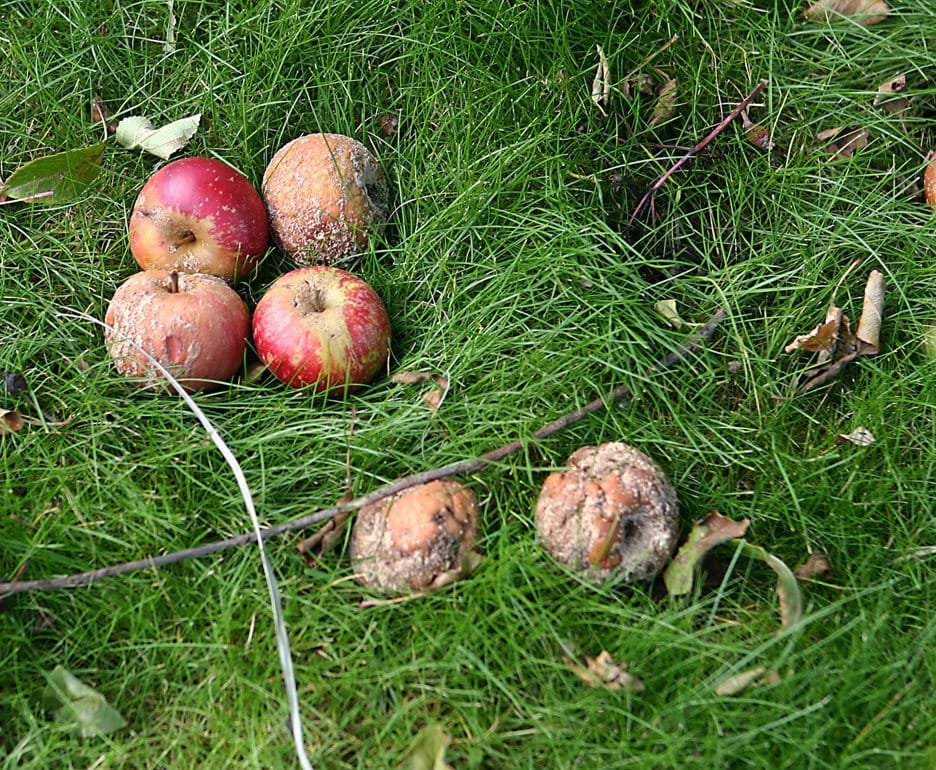 Besides worms, apples can also get attacked by fungi diseases, so they rot. It is contagious, so you need to remove all windfall apples from the garden and also pick the rotten apples from the tree.