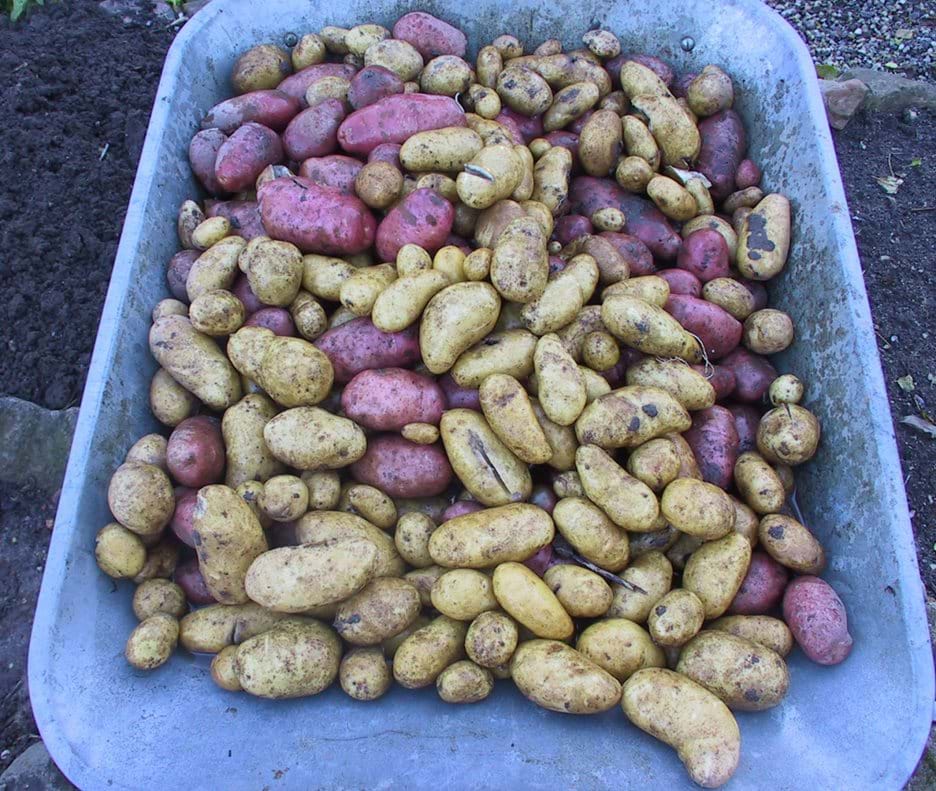 There are more than 4,000 different potato sorts.

The humble potato is a staple of British food and one of the most popular home grown crops. While you’ll find only a small handful of different types of potatoes for sale in supermarkets, there are a huge number of varieties available if you want to grow your own, ranging from those perfect for roasting, ones that are good mashed and delicious bite-sized new potatoes. There are even purple spuds, such as ‘Shetland Black’, a heritage variety from the Scottish island of Shetland that has fabulous purple-coloured flesh.

Potatoes are generally easy to grow, but here are Juliana’s top tips for growing the healthiest plants and harvesting the best yields.

Buy seed potatoes – Don’t be tempted to plant out ordinary potatoes you bought from the supermarket to eat, instead you need to use seed potatoes, which aren’t actually seeds but tubers that are certified virus-free and specially produced for producing crops of potatoes. 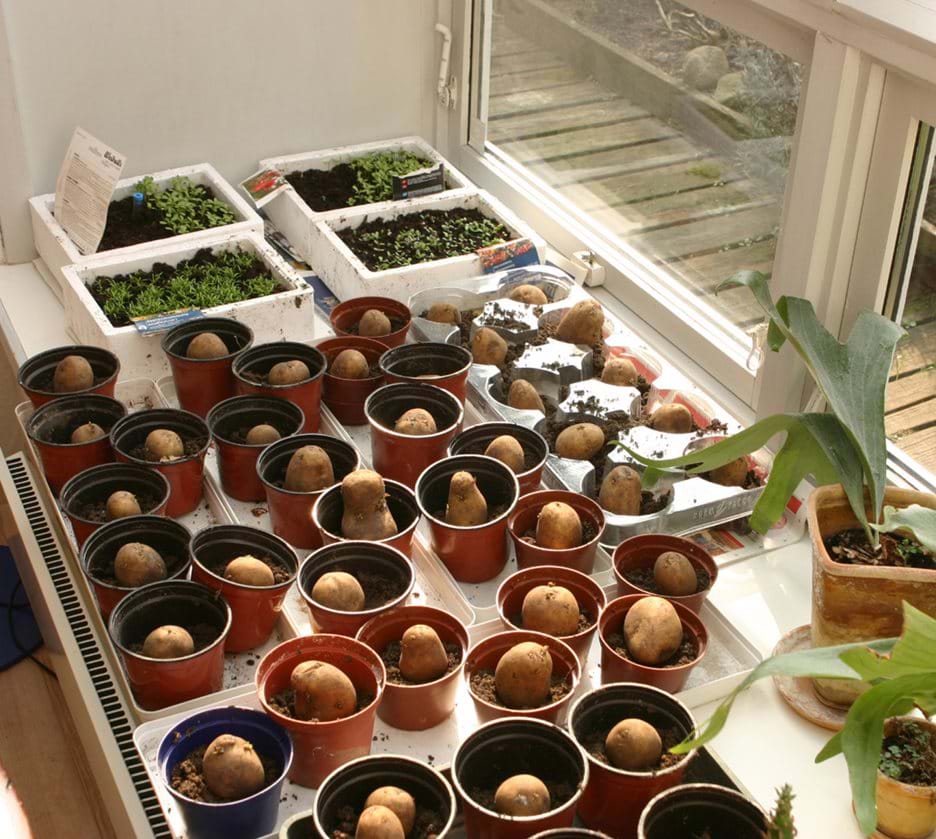 Pre-sprout potatoes on a window sill

Chitting – This means pre-sprouting the tubers so that they develop short, stubby shoots before planting, which helps to increase the yield of the plants. Stand the tubers upright in trays, pots or egg boxes and place in a bright, cool spot that’s frost-free. It should take about 6 weeks for shoots to develop.

Cover the ground – Warm up the soil and protect from excess rain by covering your vegetable beds with plastic sheeting – black or clear plastic are equally as effective – or cloches. Put these in place in late winter.

Prepare the ground – Dig in plenty of well-rotted compost to the area where you plan to grow the potatoes. This will provide nutrients and help to hold onto moisture.

Fertiliser – Use a specialist potato fertiliser which will have the right balance of nutrients. Too much nitrogen can make potatoes prone to pests and diseases, so if you’ve used manure to improve the soil it’s best to avoid adding more nitrogen to the soil. Comfrey fertiliser can be applied once a week once the potatoes have started to produce foliage above ground.

Earth up – This term means covering the emerging foliage with compost or soil to protect the growth from frost damage and to exclude light from the developing tubers which causes them to turn green and become inedible. 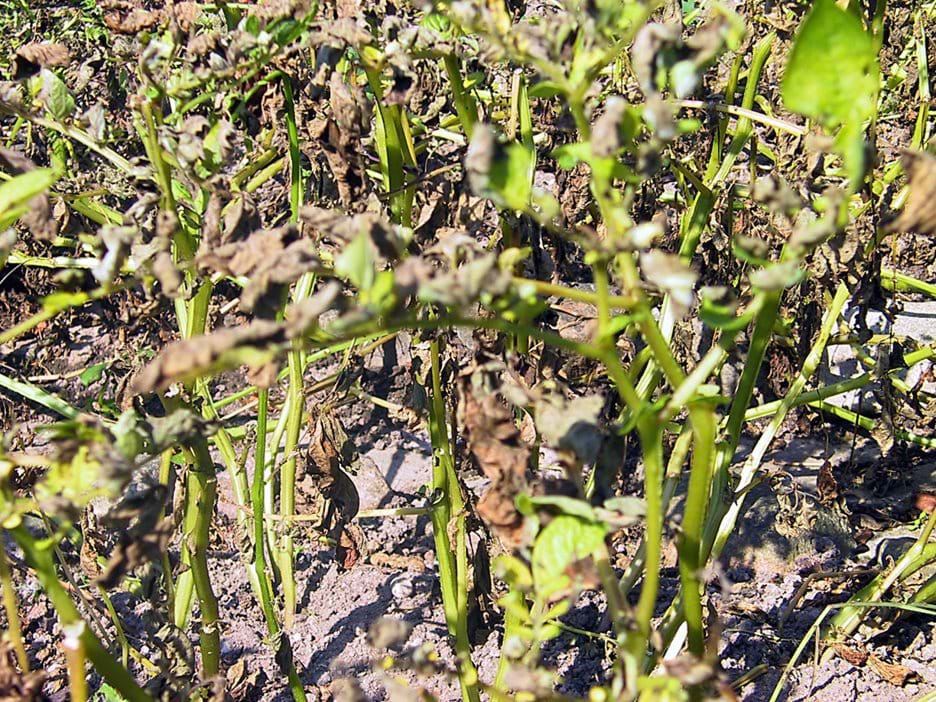 Potatoes are prone to scab and blight

Keep well-watered – Potatoes need moist but well-drained soil to produce a good crop, and a lack of water can cause potato scab, so it’s important to keep them watered, particularly during dry spells. Take care to water the soil rather than splashing the foliage, as this will use the water more efficiently, directing it to the roots. Wet foliage can also lead to fungal diseases taking hold. 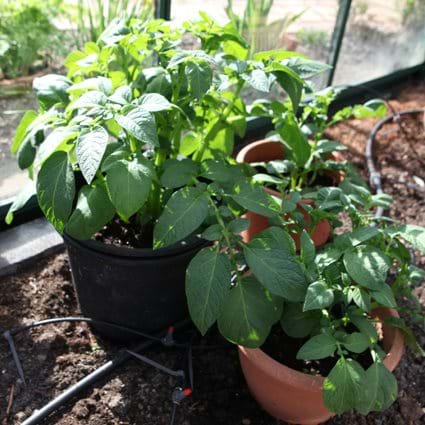 Buckets and pots of potatoes in the greenhouse.

In containers – It’s possible to grow potatoes in containers, such as large pots, potato sacks or old compost bags. Fill the base of the container with 15cm of compost, add a sprinkle of potato fertiliser and then place one or two tubers on top of the compost and cover with more compost. Water, and as the foliage grows cover with more compost. It’s important to keep them frost-free, so you can keep them in the greenhouse, but it’s a good idea to move them outside once the temperatures rise as the plants will stop producing tubers if the roots get too hot.

10 things you can do in early spring

How to make leaf mould

Grow apples, figs, tomatoes and much more on your balcony