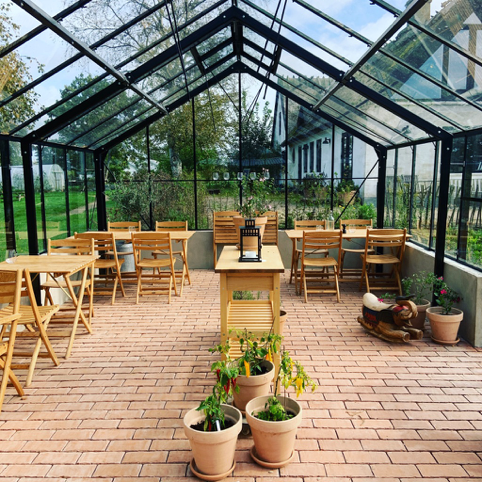 A finished orangery with a beautiful floor of red bricks.

All ends must be tied in the final sprint of construction, and when you have sold the result in advance for a large event, then it is really important that the deadline is not exceeded. Which, of course, it does. And good advice is expensive, quite literally. Here comes the third and final part of Rabarbergaarden's dream of an orangery.

Don’t count your chickens before they hatch. Close only counts in horseshoes and hand grenades. Be at one’s wit’s end. All three good old sayings and all three characterize our construction of the orangery here at Rabarbergaarden.

We are quite optimistic here at Rabarbergaarden. You have to be when trying to be self-sufficient with organic vegetables and meat for your own restaurant. Therefore, we had, also in our optimism, sold an event to a larger company, an event that would of course take place in the new orangery. According to the original production plan, we would have a three-week margin after construction was completed before the company had to hold their event. That was a quite short timeline, as everything rarely goes as planned.

The Juliana people had fitted all the glass, doors, finished joints, tightened, and the whole house looked so beautiful. Now only one part was missing, namely the flooring. We had chosen the beautiful red bricks that stood ready on their little pallets. Gravel and topsoil laid ready in their piles, just to lay under and between the red burnt bricks.

Now we just needed the paver, with whom we had made a start date and appointment. The day dawned, but no paver came.

It has happened before in history that a workman has not appeared at the agreed day and time. We, therefore, sent a friendly 'remember-you-have-an-appointment' text message. The next day we still had not heard anything. We then started calling and later we barraged the workman with phone calls.

After a week, he made a sound. As the common disease that it has gradually become, the poor man suffered stress. He had taken in way too many tasks and had to throw in the towel, which he was really sorry about.

We cannot and will not be angry that people get sick, because it is something that can affect us all, and when it does, we need compassion and care, not blame. Instead, we went hunting for a new paver. We had now lost a week of our margin of three weeks before the impending event for the big company.

And we might as well say it right away, there are far, far too few pavers in Denmark. We could simply not find one. Fortunately, we know an incredible number of other workmen, carpenters, masons, plumbers and more. They cannot lay bricks, but they do know a lot of other workmen, so the troops were called in and the jungle drums set in motion.

Bottles of wine were promised, to the person or people who could put us in touch with a paver who could lay the floor and lay it NOW.

And as it so often is the case, we ended up with someone-who-knows-someone-who-has-a-cousin-who-has-a-boyfriend-whose-father-is-a-paver. The effort was honoured with the aforementioned bottles, a new and somewhat more expensive agreement was made with the new paver and then the schedule was consulted once again. We were now only five days from the absolute deadline! 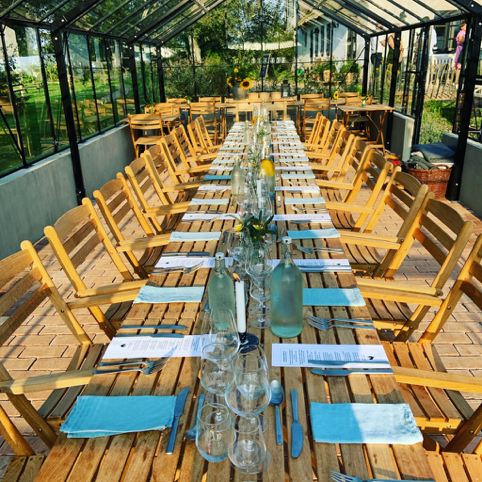 The tables are set for the party and the orangery was finished just last minute.

In the eleventh hour

It would not be entirely untrue if we said that we breathed the paving team in the neck. We did it quite literally. The day before, or closer to the evening before, the last topsoil was driven into the orangery and painstakingly broomed across the burnt bricks.

Late in the evening, in the middle of June, we were able to move furniture in and get ready for the event the next day.

Early in the morning, during the day, the electrician came and connected the power, and a little more than two hours before the company that had booked the orangery arrived, we were completely finished.

That it then turned out to be a day with high sun and so warm that the company moved outside during the day because they were overheating inside the orangery, could not take the joy from us. The joy that we had actually managed to get to the finish line and that our dream of an orangery at Rabarbergaarden had come true.

However, we wrote two notes to ourselves; Shadow, what do we do with it?? And another time; Don’t count your chickens before they hatch…

Throughout the summer, the orangery has brought joy and given us the opportunity to have late guests sitting outside. Because when the dew falls, it can get cool in Denmark. But now we have the opportunity for our guests to sit inside, but still close to nature and the view that many enjoy while eating their menu here.

In the autumn we have used the orangery to serve coffee and cake to all the many guests who come on the weekends. For Christmas, the orangery hosted a Christmas market, glögg events, Christmas bingo and much more.

We are not quite there yet, but I never think we will be with our orangery because there are so many new things you can do all the time. The next thing that must happen is that we must put shading plants in the greenhouse, and then the big project is to put in a heat source, we have thought about a wood stove with a glass door so you can see the fire.

We must also have laid a tile all the way around the top of the foundation, and right now we are wondering what colour and pattern it should have.

We also had some problems with water coming in. Fortunately, the service-minded Juliana people have installed more and new gutters so that the large roof surface can get rid of the water. We are now collecting it so that it can be used for irrigating the plants in the greenhouse and elsewhere.

Good advice does not have to be expensive

Everything has its price

As written in the 2nd section, it is not cheap to build an orangery, and when you have to find a new workman in the middle of the project, it also costs money. In total, the construction cost 43,675 pounds without furniture.

For a company like ours, it makes both good sense and a good economy in the long run, because we can prolong the seasons and offer our guests a new experience.

Our orangery is a large one of a kind, cast and bottom insulated, inlaid stream and all. But you don't have to look up such large bread. In your own garden much less can do that. But if you have a dream of an orangery, then we can only recommend that you go for it. 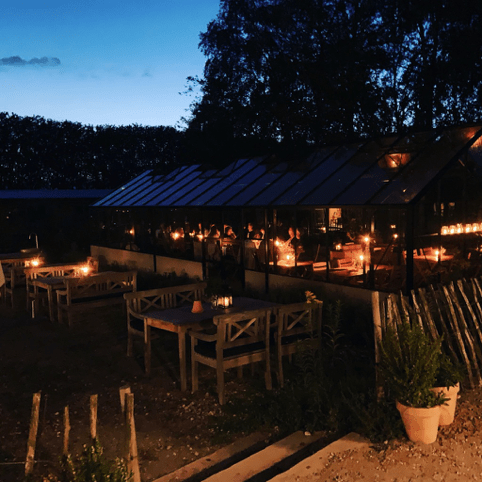 Blend your greenhouse in with the garden