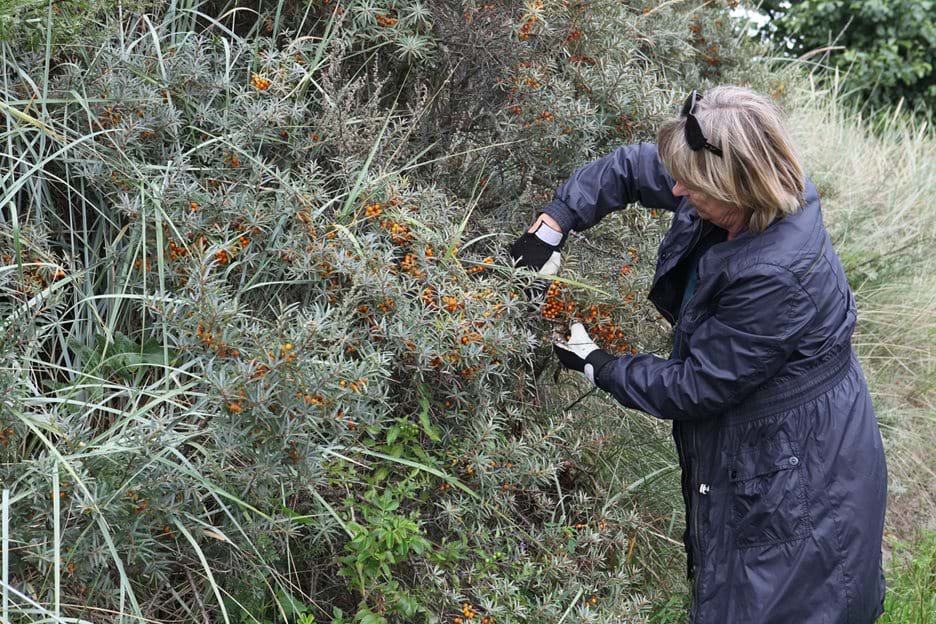 The hunt for the tasty vitamin bombs is soon beginning

Blackcurrant, gooseberry, elderberry and many other berries, we know they are healthy and therefore they should have a spot in the garden. Right now, the most desired berry is the sea buckthorn. You can plant sea buckthorn in full sun in your garden, but it is not entirely recommended as sea buckthorns have a large number of root suckers which will soon make your garden fairly inaccessible. Therefore, it should just stay in nature or on a field, if you are lucky to own one of those, and from there you can harvest both berries and leaves which are filled with vitamins and other things that are good for the body.

In Latin, the name for sea buckthorn is Hippophaë Rhamnoides. The name is Greek, hippo means horse, and phaos means track. If you feed a horse sea buckthorn leaves its hair will shine. Sea buckthorn has become popular because of the Nordic civic restaurants, but scientists all around the world have found out that the sea buckthorn is filled with vitamins, oils, flavonoids and beneficial fatty acid. Maybe it’s even beneficial for people with a hearty appetite. Research shows that sea buckthorn helps reduce the risk of diseases like diabetes, coronary heart disease and cancer. Also, studies from Copenhagen University shows that sea buckthorn in a meal can reduce the decomposition of carbs, which will benefit the blood sugar and, in the end, reduce one’s heart for food.

If you have already been hunting for the healthy berries, you have probably noticed that they are not that easy to tear off the twigs. They are holding on tight. When they are ripe you might end up mashing them because they don’t have the same liberation-gene as other berries. Therefore, the berries should be picked when they are unripe or the entire twig should be cut off and frozen, so you then can beat the berries off. Though it can still be difficult to get them off, so you need to beat them a lot.

The berry is actually a nut or what you call a false stone fruit. They ripen at the same time. When harvesting early the content of vitamin C is high. 15 times more than a lemon. The longer the berry is ripe the lower the level of vitamin C gets, while the content of sugar, oil and vitamin A increases. If the berry is harvested too late the oil can get rancid and then the berry is useless. The leaves can be used for tea, but then experts recommend using the leaves from the male shrub, as they are more flavoured and contain more oils. Sea buckthorns are dioecious species with separate male and female plants. The male flowers are yellowish-brown, small and insignificant. They are in aments with few flowers between the bud scales and lower leaves. The female flowers are separate in the corners of the bud scales and lower leaves. The female plants will get large conspicuous orange-red berries. Before blooming you can easily see the difference between the male and female plants. The male flowers are significantly thicker than the ones on the female.

Sea buckthorns fertilize themselves. On the roots are small heads which are capable of absorbing the nitrogen in the air. That is why the plant does not need fertilizer. If you still fertilize, its own production of nitrogen will stop. Sea buckthorns are all around the world and tolerate down to minus 40 degrees. Even while blooming it won’t be damaged by frost down to minus 6 degrees.

If you let the sea buckthorn grown without nursing the shrub or small tree can get 4-5 meters high. The fruits are placed on 2-3-year-old twigs, not old twigs. If the sea buckthorn is not pruned the twigs with berries will be high in the air. Therefore, professional berry breeders prune the twigs when harvesting. The twigs are frozen down with liquid nitrogen at minus 20 degrees and are then put in a heavy shaking machine where berries and leaves fall off. It is important to cut the twigs close to the stem, but leave the bit called a stump. From there the new side shoots will grow.

Don’t prune each shrub too much. Be aware that even when using the freezing method, the berries don’t just fall off. You still need to beat the twigs hard for the berries to let go. 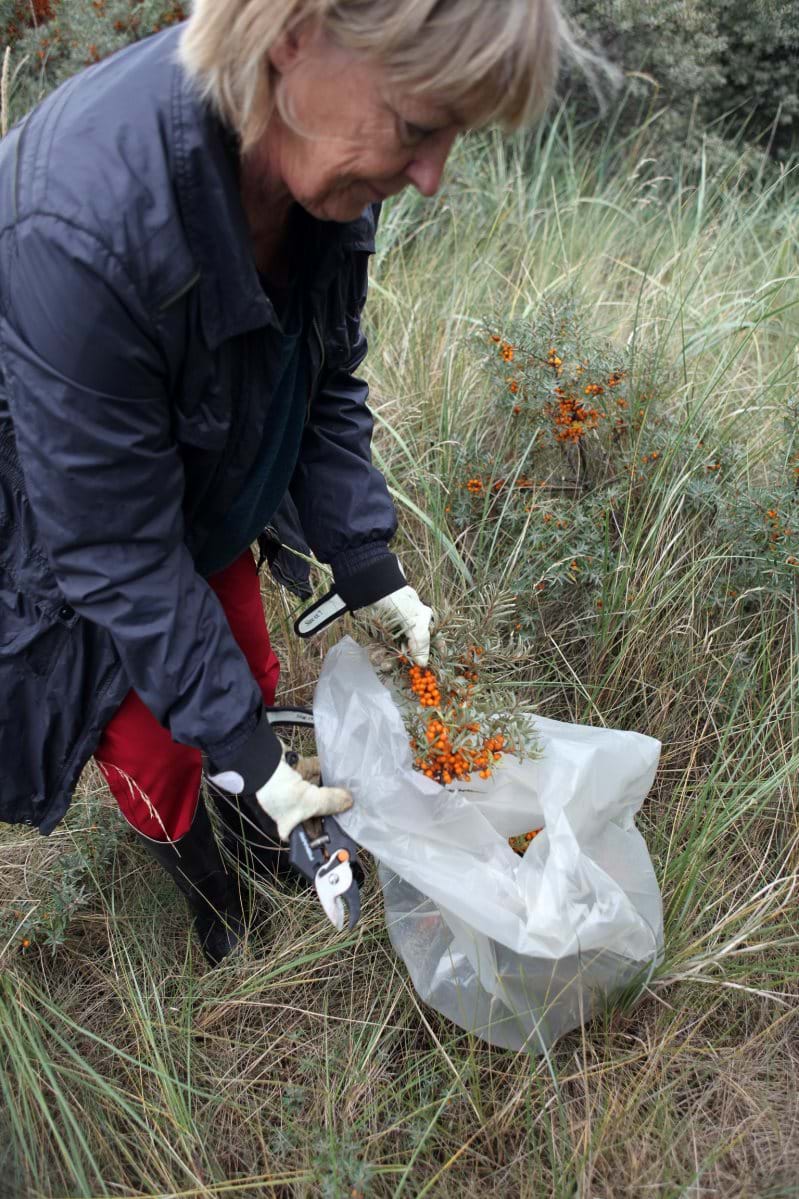 Twigs of sea buckthorns take up much space in the freezer, but it is the fastest way to pick the berries off.

Where to find them

If you haven’t found a place with sea buckthorns, then you should typically look in nature by grounds or edges of the wood that are short of nutrients and in full sun. Sea buckthorns grow in all kinds of soil. If you grow them yourself the soil should be rich in mould, but in nature, they mostly grow in sandy soil with access to lime from seashells especially. Industries are already using sea buckthorn in juice, jam and oils, so if you don’t want thorns in your fingers, then luckily there are other ways to access the healthy berries.

Make your own seasoned salt