Intoxication in more than one sense 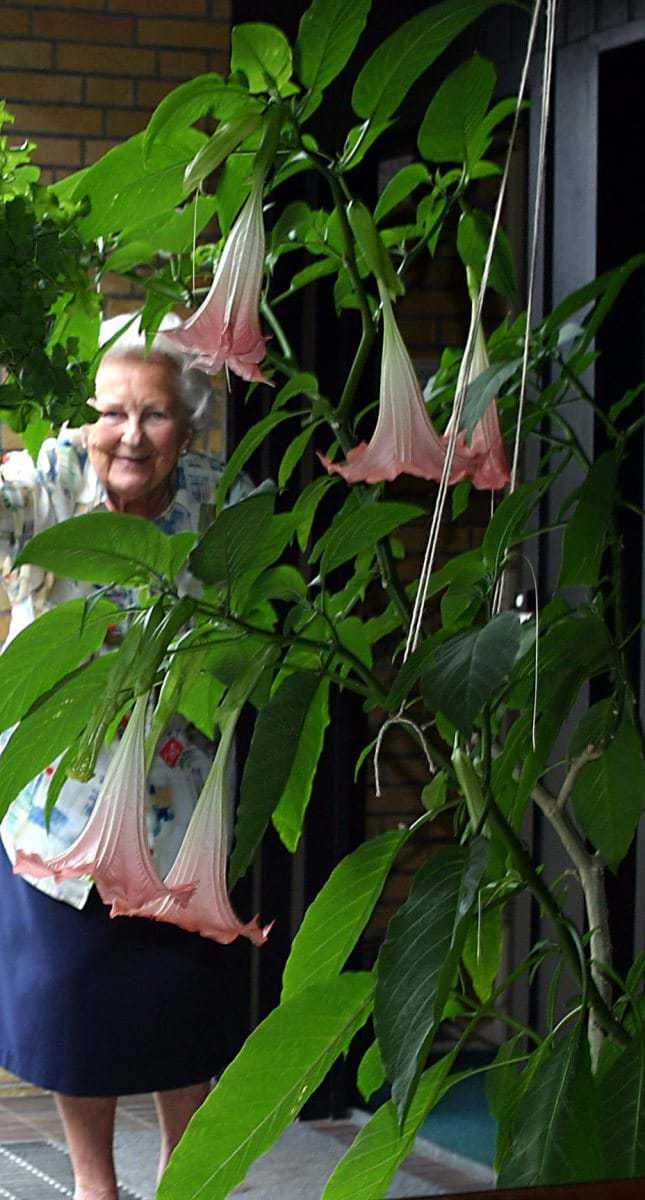 It is a fact that elders and a certain group of the young appreciate angel’s trumpets.

Angel’s trumpets have always been popular, especially among two groups. One is, hopefully without offending anyone, the older generation which has always appreciated the beauty of flowers. The other group is young people, a group of Germans and Chilean who do drugs. I will get back to that.

Angel’s trumpet includes 6 species and some subspecies and sorts. Earlier the family was called Datura, so if you search for angel’s trumpet you might find them under that name. The plant originates from the tropical part of America which says a lot about how it should be cared for to survive.

The name Brugmansia stems from the Dutch botany professor Sebald Brugsmans who in 1763 brought the plant to Europe. Brugmansia belongs to the nightshade family (Solanaceae). Potatoes and tomatoes belong to the same family. The most known Brugmansias are Brugmansia aurea, Brugmansia sanguinea and Brugmansia.

The nightshade family include toxic plants and the Brugmansia is extremely toxic, especially the seeds, leaves and flowers. It contains hyoscyamine, atropine, scopolamine and other alkaloids. Serious intoxications have been seen when using it medically or when the plant has been used experimentally (abuse). Intoxications have rarely happened by accident. Consumption of the plant or sucking on the flowers (nectar) can be dangerous for kids. Symptoms of intoxication are dry mouth, thirst, blushing, palpitation, vomiting and dizziness. Moreover, dilated pupils with a visual disorder, fever, restlessness and confusion. In critical cases cramps and unconsciousness.

Unconscious from the scent

You need to be careful with the plant. Some groups of young people use the plant as a psychedelic drug. They use the flower and I have read on many German websites how to make tea from the flower. Simultaneously, the users warn not to experiment yourself. Partly you can get addicted to the drug and partly you can get a rush that can be critical for yourself and your surroundings.

The Danish expert Tonny Surrow-Hansen explains how the scent from large angel’s trumpets can cause serious side effects. He uses an example of a boy who sat underneath a plant with big flowers. The boy fell down unconscious and was taken to the hospital.

In the bottom of the Y the first bud is formed and if the plant is not pruned then it will, in the same way as an apple tree, keep blooming and not return to the growth phase.

On the other hand, if the angel’s trumpet is pruned under the Y it will have to go through the growth phase one more time before blooming. If you prune the plant above the Y, then you will experience that it forms more buds pre-summer and blooms earlier.

The angel’s trumpet is easy to care for and does not demand high temperatures. Though the problem is the English winter. The plant does not tolerate frost. The most common is to keep it in a room that does not get too warm. The room should have a temperature of 4-12 degrees. It needs little light and little water. Though, if there is not enough light it will lose its leaves, but they come back. If it gets light, like in a greenhouse, the leaves won’t fall off. In the summer it should be irrigated 3 times a week and fertilized once a week.