Grow sugar in the greenhouse 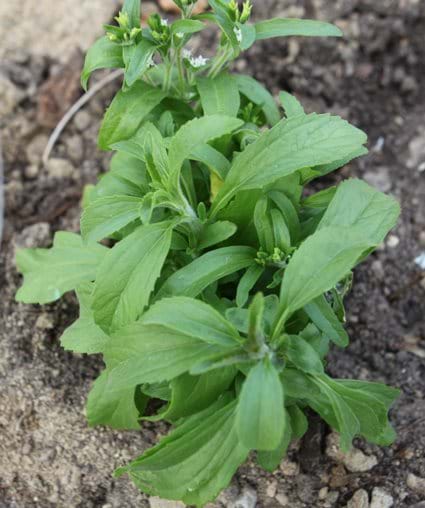 This Stevia is in my kitchen garden and survived the night frost, but that won’t last for long.

A comparatively small plant with tiny white flowers can easily replace the entire household’s usage of sugar. The plant can be used in your coffee, tea, pastries, cooking and as a substitute for sweeteners, or if you would like to slim down, avoid cavities or suffers from diabetes.

The Americans and Japanese have used the plant for many years, the Japanese for 30 years. In 2012 EU citizens were finally allowed growing the plant. You should grow it in the greenhouse and bring it inside when the temperature drops to 10 degrees.

The plant is called Stevia Rebaudiana. A single leaf sweetens 300 times more than sugar. Powdered you should just dip a toothpick in the powder to have sugar equivalent to 3 sugar cubes. Pouring boiling water on the leaves releases the sweeteners.

Even though relatively few know about the plant, the effect is not newly discovered. The plant has actually been known since the sixteenth century when the native Indians used it for medicine. In early 1900 a study of the plant’s effect was made. Since it has been the subject of numerous research findings, which partially concludes that the plant, besides its medical effect, does not pose any adverse reactions and thereby is completely harmless for the health, and partially concludes the opposite, that it could pose a risk for cancer if eaten in excess. Exactly these conflicting research findings are believed to be the reason for the delay of approval. Others believe it’s due to commercial interests. If the production of Stevia booms, it could pose a great threat to the sugar industry. It could affect the production of sugar beet and the chemical sweeteners used as sweeteners.

In the USA, Coca Cola uses a sweetener called Rebiana, extracted from the Stevia plant, as a substitute to Aspartame, which is suspected to be carcinogenic. In Denmark, a clinical trial was made on patients with type 2 diabetes. Preliminary, the trial shows that the sweetener from Stevia has an extremely positive effect on people with diabetes. It lowers the blood sugar, impedes the diabetes provoking hormone glucagon and reduces the blood pressure as well as the cholesterol. The studies show that the basic structure of the extracted derivatives stimulates the cells in the pancreas, which excretes insulin, that then helps sugar from the bloodstream to the muscles. If the sugar doesn’t reach the muscles, the substance in the blood rises and harms the organism.

In other words, Stevia can affect the chemical sweetener industry negatively, but be healthy for people who want to avoid sugar, either because they have diabetes or because they want to be healthier.

Stevia Rebaudiana does not thrive in the English winter, but it will thrive in a greenhouse. The plant is part of the Asters family, which originates from the northern areas of South America. There are about 200 different species, but Stevia Rebaudiana is the only one with a powerful sweetening effect.

Studies have shown that Stevia can lower the blood sugar of people with diabetes by 20 percent. Moreover, it can, when used in medicine, reduce high blood pressure by 12 percent and finally, it has a beneficial effect on the cholesterol.

You can buy the Stevia plant as seeds in several online shops. The plant can be bought in nurseries and in the German supermarket chain Lidl.

In nature, the plant turns into a 3ft bush, which requires sun, humus or potting soil and no less than 10 degrees in the winter.

You can extract the sugar taste by treating the plant like you treat herbs. That is, dry and grind them or pour boiling water over them and let it sit for 15 minutes. Afterwards, it can be bottled and kept in the refrigerator for a week. Be careful eating the leaves, it is so sweet most will feel nausea.