Ease the gardening by starting now 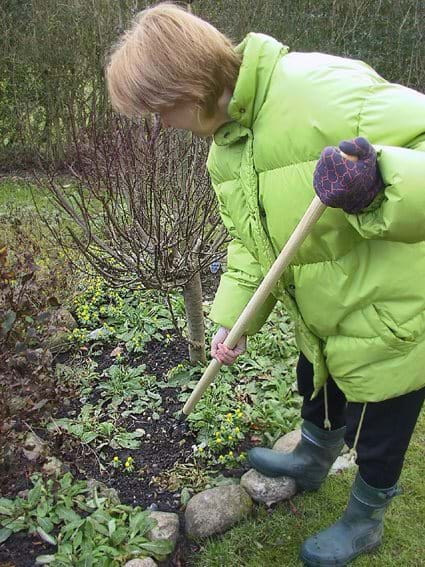 A member of the GreenhouseForum asked for alternatives to pesticides, and here is some free and healthy advice. A good hoe like this circular hack easily helps get the first weeds off the ground.

Weeds are stunningly indifferent to the harsh winter we have had. That is the purpose of weeds. It grows when it wants to grow. If you want to avoid too much work the rest of the year put on some warm clothes, now that there is not much to do in the garden and start the fight. It is healthy for both you and the environment. 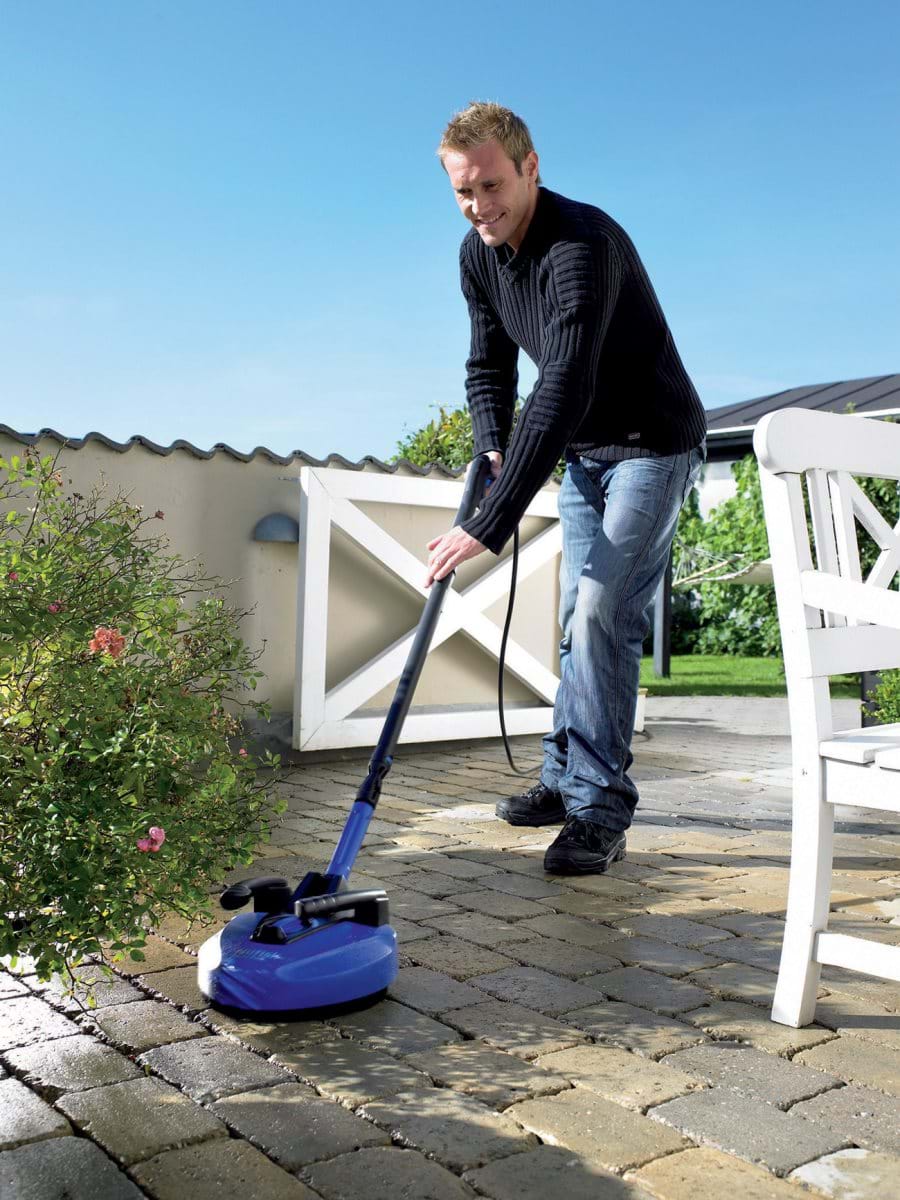 Tiles may have algae that are difficult to remove, but a broom frequently takes both algae and weeds between the joints. Alternatively, this patio cleaner from Nilfisk can help.

Weeds between tiles and pathways can grow as long as there is a joint of just a single inch, even if there is a weed barrier underneath. Use a rigid broom regularly and be diligent in sweeping pavement, patios and pathways that have tiles. If the weeds get hold, then you can use a joint cleaner or a weed burner. Grass in the joints is best weeded during a period of rain when it is looser.

Choose as large tiles as possible to avoid many joints. Use a sealant to makes an elastic seal between the tiles. It is quite effective, but also quite expensive. You can use stone flour in pathways, as it fills joints easier than gravel of granite and stone. 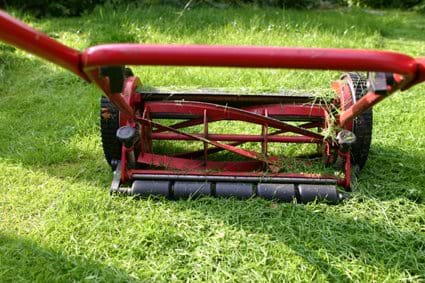 The lawnmower gets most of the weeds in the grass, but let the grass get a good hold before mowing the first time.

Weeds generally do not tolerate getting the top cut off quite a few times, as the root will starve to death. Mow the grass so it is 1.6 inches high. Dandelions and weeds with long roots can be removed with a dandelion remover which easily removes the entire plant. A well-fertilized lawn has fewer weeds. Moss should be removed with a rake, and moss does not like to be mowed down either. If you leave the grass 2.8-3.1 inches long in the winter, the moss cannot thrive. Where there is a lot of shade, the moss thrives better than the grass. If this is a problem, you can plant shade-tolerant perennials.

Generally, there is not much bare soil unless it is sprayed with herbicide. Therefore, it is important to cover the ground with the plants you like. It can be shrubs or ground cover like soft fruit, ivy or other good cover plants. If you are very bothered by weeds, you can consider sowing grass until you have fought off the weeds you do not want. The grass is easier to remove. 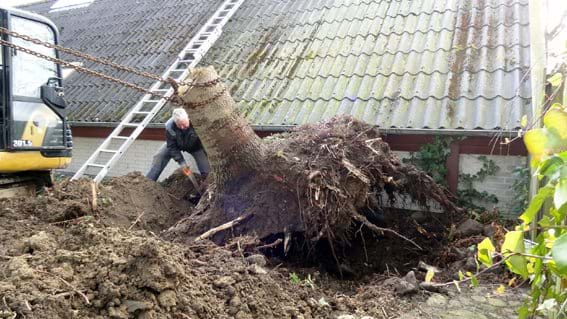 Root weeds of the size you need cranes for :D

In the kitchen garden, you can cover the soil with withered plant parts, straw or coarse compost or you can sow catch crops that cover the soil until you need to sow again. Regular use of the cultivator takes the annual weeds so that it is not able to get a hold again.

Black plastic is another option. If you cut out plastic pieces and put them on the ground two to four weeks before sowing, and remove the plastic when you need to sow, then weeds will sprout under the plastic. You then remove the weeds without rooting too much in the soil and subsequently sow your seeds. The result will be that a maximum of 5% weeds will appear where the soil has been covered with plastic, while in areas where the weeds have been removed without plastic covering the soil, up to 91% of weeds can appear.

Only black plastic (or old newspapers) has this effect. Transparent plastic would aggravate the situation.

Weeds in the greenhouse can be difficult to spot. You can easily remove it with a hoe for example. The earlier you do it, the better. 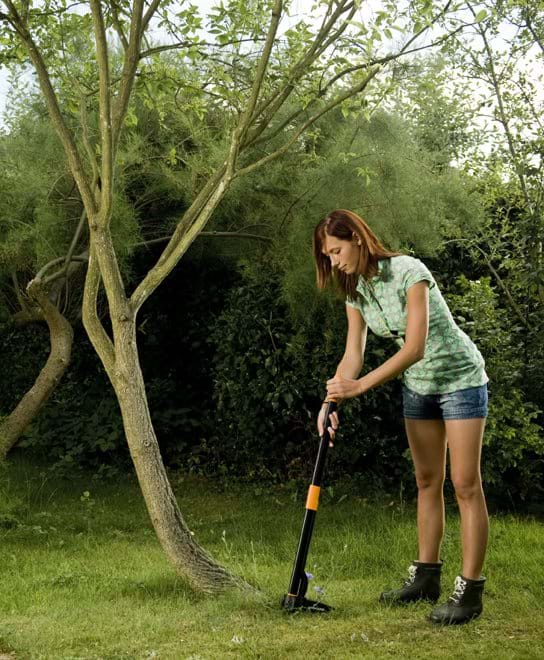 A dandelion remover is good for weeds with long roots.

When you do not want to use a gas burner

Gas emits CO2. That is the biggest minus of using a gas burner. The plants must not be burned but scorched so the cells are destroyed. The leaves just need to bubble up.

Several other remedies have the same scorching effect based on fatty acids or garlic. They are based on saturated fatty acids of the same kind you find in butter. When the fatty acids get in contact with the green parts of the weeds, the plant cells are destroyed, after which the plant will wither away in a few days. In addition to fatty acids, this product contains 5% Cellocidin. The substance is an antibacterial agent that prevents the root weed from shooting new shoots. Cellocidin is used to prevent onions from germinating during the winter and is harmless to humans. It only works locally on those plants that are completely covered by the remedy. This means that nothing happens if your perennials, or the leaves on your beech hedge are touched by the remedy. The product can therefore be used in the hedge, if you can otherwise cover the entire unwanted plant. The ingredients will be almost completely degraded after a few days, and 100% degraded after 10 days. The residual product is carbon dioxide and water.

10 things you can do in early spring