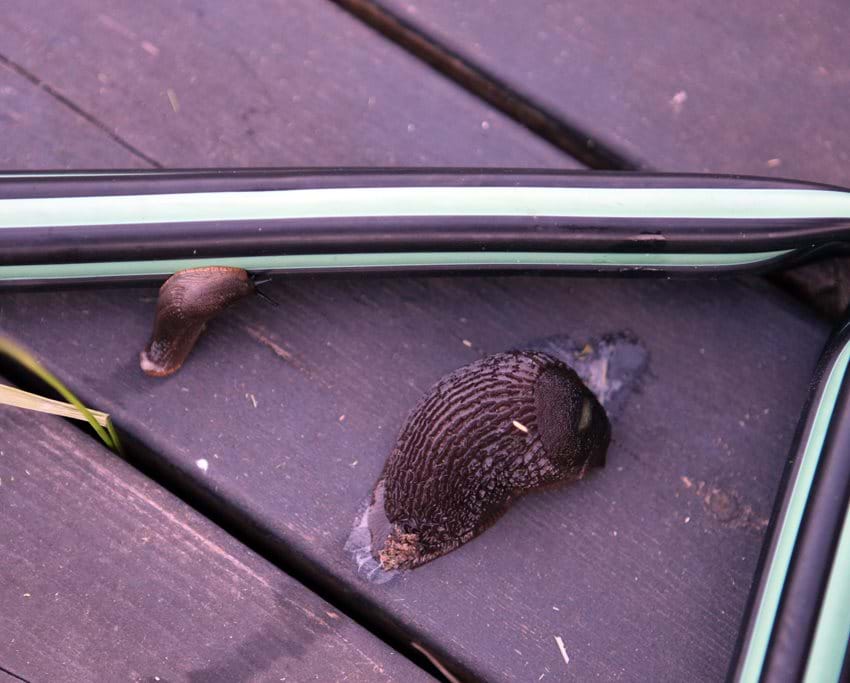 The electric eel has demonstrated its power on the two Portuguese slugs.

The Portuguese slugs have in previous years been all over the columns of the newspapers. The dry summer and the long winter have reduced the number. The gardeners' fierce fight against the Portuguese slugs has not been in vain either. They have done theirs. Finally, we now know that blackbirds, hedgehogs and toads easily can snatch a Portuguese slug. Portuguese slugs are in the category that The Danish Nature Agency calls invasive species.

Now the Portuguese slugs have gotten a whole other enemy. It is an electric garden hose called Slug Fear. The hose was invented and patented by the Danish Ole Tidemann, a civil engineer, who has also started his own company, Slugvision. He has 25 years of experience as a product development manager in the electronics industry. It looks like a garden hose and you just roll it out wherever you want. When slugs try to crawl over the hose, they get a sure and effective shock that makes them turn around. However, it is not that powerful that a human can feel it.

In the summer heat, I managed to find a couple of involuntary test slugs. I found a pair of black slugs and a pair of Portuguese slugs. To give the slugs the ultimate challenges, I made a round ring with the hose, and put the slugs in the shock zone. As soon as they crawled up on the hose, the result was clear. The feelers retracted and the slugs were inactive for 1 to 15 minutes before attempting again.

The mysterious night event
Overnight, I left them in the electric cage to see if at some point they would overcome the shock and break out. The result was very surprising. The next day there were zero slugs left. I checked the hose. Was it even close enough to the ground, or could the slugs have crawled into the hose itself, which is hollow?

I stuffed a rubber glove in the hollow hose and made sure that the hose was close to the ground. Four new slugs were captured. An hour later, one was suddenly gone, obviously without my supervision. I put a few matches in my eyelids and kept the night watch, which gave me an explanation. A large, fat toad had sniffed its way to the pantry and snatched, one by one, the slugs in the arena, after which the well-fed and several slugs heavier toad jumped out of the arena. The hose, named Slug Fear, worked without killing, something we animal lovers like. But the test also showed that toads merrily take care of all the slugs, black and brown.