There’s something very satisfying about digging up your own potatoes, and you don’t need a lot of space as they grow surprisingly well in containers, making it possible to have your own crop of spuds on a patio or even a balcony.

One of the easiest ways to grow potatoes is to use an old compost bag; this is also a good way to recycle these plastic bags rather than sending them to landfill. Pierce a few holes in the bottom of the bag, then fill with about 15cm of compost. Place three potato tubers on top of the compost, cover with a layer of compost so that the tubers are buried and water. When the foliage is about 8cm high add more compost burying the leaves. Repeat this process, which is known as ‘earthing up’, over the coming weeks; keep the compost moist and feed every 10-14 days with seaweed fertiliser. 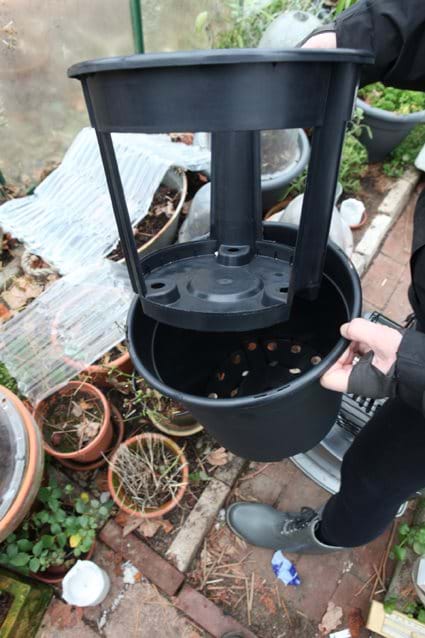 A clever invention. A pot in a pot makes it easy to harvest potatoes.

A clever invention – a pot in a pot which makes it easy to harvest potatoes.

It’s also possible to buy special potato pots which consists of two pots, one which has gaps in the sides which fits inside the other. Grow as you would with the compost method above, but when it comes time to harvest your potatoes, simply lift the inner pot out and you’ll be able to pull out the potatoes from the sides, harvesting what you need rather than having to dig up the whole plant.

Using either of these means no back-breaking digging or accidentally spiking a potato with your garden fork when you come to harvest your crop. And if you fancy growing your own potatoes for Christmas dinner, seek out a first early variety from specialist suppliers in late summer. Pop them in a pot, keeping them somewhere frost-free, such as a greenhouse, and it should take 12 weeks for you to have a crop of home grown Christmas spuds.