He calls himself a garage-inventor and he has even thrown out both the car and motorcycle from the garage, to make room for his passion. All men dream of an inspection pit, from where they easily can inspect the undercarriage of the car, drain oil and refill it. He has filled his inspection pit with two giant tanks, which captures all rainwater from the house and cleans it through a self-invented cleaning system, to reuse it for the toilet and washing machine.

Newspapers and nationwide TV have covered his story, but this was long before we even thought of doing something about the flooded sewer systems.

Hardy Ipsen is a Danish electrician who has retired early. He has been a teacher at technical schools, and he is still teaching, on the internet, about solving small environmental issues. His overall headline is something like: Learn from nature, it’s smarter than you anyways.

Hardy has found a trick to clean the garden pond from algae in the summer with very few resources and to keep the bottom of the pond from freezing. 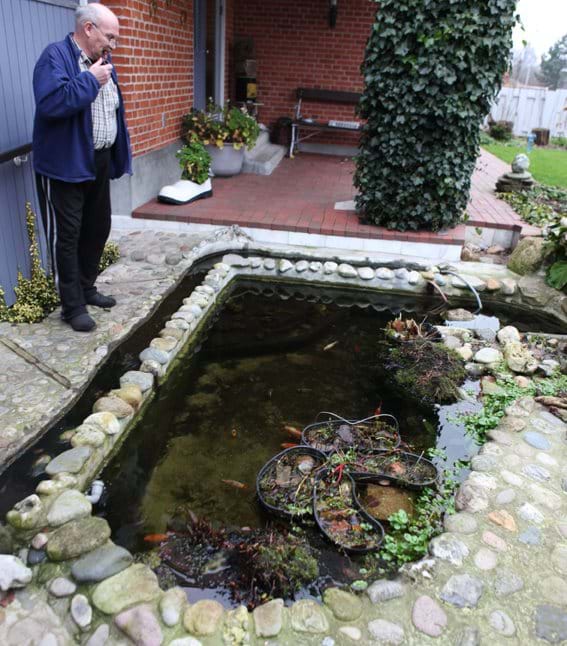 Hardy enjoys watching his fish in the crystal-clear and frost-free water.

He has used many pounds on chemicals, filters, UV lights, winter covers and other techniques, to solve his problems with the garden pond, containing 2500 litres of water. His way of solving algae and freezing problems are, in principle, known but Hardy Ipsen has simplified the known method.

A clean lake is made from the balance between plants and fish, pH level and aeration. Aeration is made from a bubbling brook, maybe even from several brooks, which ends in a stream that ends in a lake.

In bathing water, as an alternative to the chlorinated pool, the principles of nature are used. Shallow water with plants aerates and cleans the lake. In bathing water, the water is cleaned by pumping it through a small cleaning lake, which then pumps the cleaned water back to the bathing water.

Many with garden ponds does it in the same way, but the techniques described in the scientific literature may sound complicated for a regular garden owner with a small pond. This is why Hardy is showing how it can be done on small scale.

He does not have shallow water, but he has made a small brook which runs along the edge around the pond. He has put tiny daphnia in the brook to eat some of the microscopic algae and then he has filled the brook with green threat algae to clean the water while it runs through the brook and hides the daphnia to avoid being eaten by the fish. 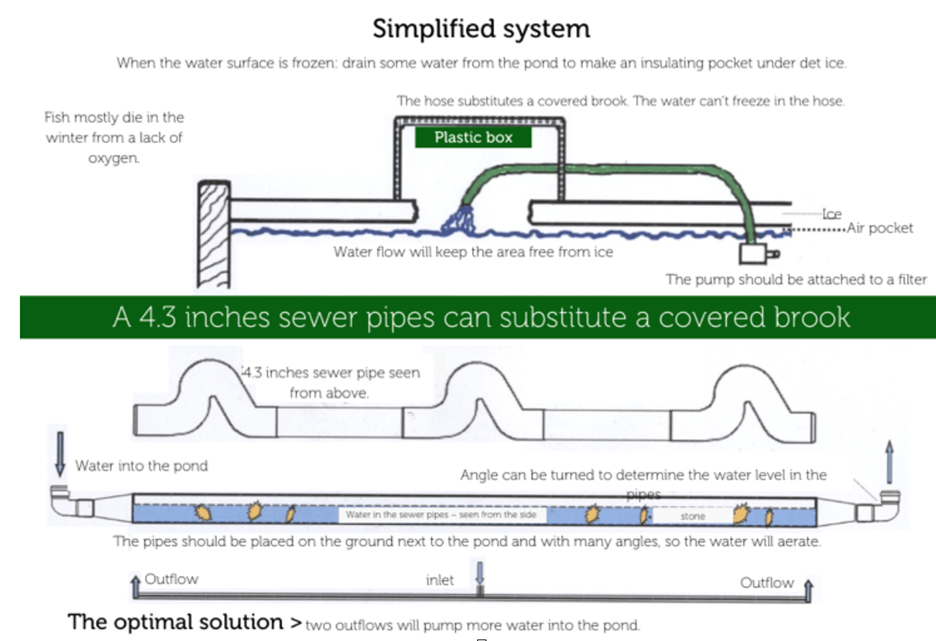 Hardy loves to give free advice. This is a drawing of the system in the freezing and algae-free garden pond.

This system has made the water in his pond crystal-clear, even though it looks like there are more fish than the pond should be able to manage. Fish are themselves contaminating the water with their faeces. There is sea sand in the bottom of the pond, which the fish rub on to get rid of parasites, and which makes it easier to see when it is time to clean the pond for fallen leaves and dirt.

Hardy has never cleaned his pond though – the green threat algae does that for him.

The co-benefit of this simplified system is that the water can’t freeze solid, because of the water flow. If the frost is hard, Hardy covers the brook with some insulating material. 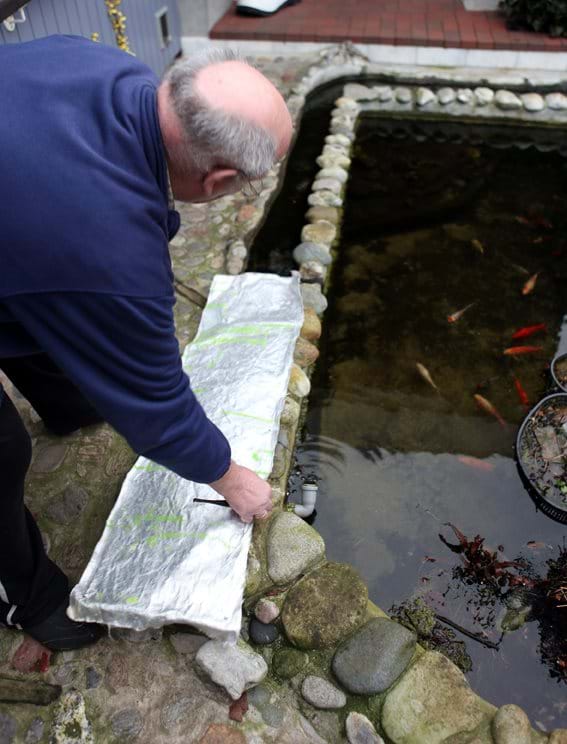 Furthermore, you can drain some water from the pond when the water surface freezes, to make an insulating pocket between ice and water. It is still important that the natural toxins from the fish faeces and plant decays can get out, e.g. through the brook that is not frozen. If you don’t have room for a brook, you can make an alternative one of sewer pipes on the ground. Worst case you can insulate the sewer pipes.